You will have witnessed in our publications the enormous influence of the Holy Roman Empire which has had an impact on the generation of cultural wealth in large parts of Europe and Africa. Well, in Mapa Turistico Italia we show you the enclave, the origin of this vast influence of the ancient world embodied in thousands of monuments, temples and military buildings that defined one of the empires that put the world at its feet. It would be difficult to mention everything that it keeps, rather we concentrated to value the most outstanding so that you have an idea of what you will find in your visit. This country is practically a living heritage, which attracts millions of tourists and curious people every year. An inexhaustible source that deserves to be enjoyed in detail. In addition to this, it has prepared for us an endless number of places, flavors and festivities that make it one of the jewels of world tourism. This is Italy.

This country occupies two continents. Its main enclave, established in southern Europe, has been the epicenter of multiple expansions and contractions of its vast domain throughout its history. Since the beginning of civilization it has served as the cradle of different cultural currents, creeds, civilizations, cultural movements such as the Renaissance, the knowledge of humanity, as well as the bases of politics and law. The vestiges of its influence are preserved in several island areas of the African continent as well as in the Mediterranean Sea. Today it covers a total area of 302,000 square kilometres and is home to nearly 60 million people. It is currently a republic, and its political formation is the result of millennia of history, wars and empires that have engraved in it the emergence of what we know today as the Western world. 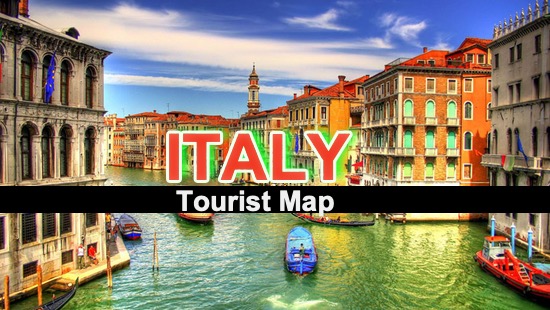 Its tourism heads with the main countries according to the influx of tourists. No less than 50 million people give Italy a privileged place among the most coveted tourist destinations. Its capital city, together with its main cities, is so acclaimed that by itself it far surpasses entire tourist countries. There are many places of interest for all types of tourism. Religion, archaeology, history, culture, leisure and adventure are written in indelible ink thanks to its strategic location on the European continent. A visit to this land will also allow you to enjoy its typical gastronomy. It is important to make a good planning if your intention is to make an integral tourism. The advantage is that there is a lot of tourist information to choose from and how to get there. Be prepared, we will help you to better organize your ideas with our tourist map Italy.

A visit to the capital of Italy is full of the ancient and mystical atmosphere that evokes all its architectural, historical, religious and cultural beauty. One of its most visited places and impossible to miss are the Roman Coliseum, the Arch of Constantine, the Basilica of Santa Maria la Maggiore, Castel Sant’Angelo, and the Trevi Fountain. It is a city more than 3,000 years old and the seat of the dynasties of the Holy Roman Empire. In Rome you can enjoy the best gastronomy from the best shops. The most important clothing shops illustrate its sophisticated clothing. Throughout the year Rome is the epicenter of important festivities and cultural events and this is another reason for the growth of world tourism. Inside is the smallest country in the world, the Vatican, with the most impressive religious, cultural and artistic sites.

Of course, at some point in your life you’ve wanted to visit this city. Famous for its navigation channels and seeing buildings almost floating in its waters, with gondolas as vehicles for romantic strolls. Well, all this magic is made up by places and events such as the famous carnivals. Venice will make you lose your way in the ecstasy of all its splendour. Piazza San Marco is the centre of all this magic. Here its gastronomic sites and cafes are always crowded with visitors with the perspective provided by the Grand Canal. This canal is the main one of its entire network and you have to take a ride in a gondola. How beautiful is the experience of crossing its bridges, among them the Rialto Bridge and the Bridge of Sighs. Enjoy important buildings and constructions such as the Clock Tower, the Doge’s Palace, and the Basilica of San Marco.

It is the capital and cultural centre of the Tuscany region. This city has much to do with the main philosophical, political and artistic movements of the West. For these reasons many places become interesting to visit. Names of illustrious people like Michelangelo, Da Vinci, and Giovanni Boccaccio have part of the cultural stamp. All this is reserved in important architectural centers where their works are captured. Come and enjoy their history and colour in Piazza del Duomo, where you will find the Cathedral of Florence, or the Baptistery of San Giovanni. The Gallery of the Academy houses important works, including Michelangelo’s masterpiece, The David. There is so much to see and so little time to concentrate on the bulk of the options, so be sure to plan a good itinerary. Don’t lose sight of the most iconic corners of this beautiful city.

Luxury and glamour tourism concentrated in the Lombard capital, the Mecca of fashion. In addition, the city is known for its outstanding position in the king of sports, football. There are many things to experience in this city. Its history goes back centuries to the arrival of Christ. Since then, it has developed as a focal point for European trade. The finest Gothic art can be seen in its main temples such as the Duomo in Milan, with its colourful stained glass windows. Another important place is the Galleria Vottorio Emanuele II, which houses the most prestigious houses of design and art. Another option is to visit the Sforzesco Castle which includes museums and parks around it. Near Piazza Cardona you can find Leonardo Da Vinci’s work The Last Supper, located in the Church Santa Maria delle Grazie.