Enjoying the city of canals is one of the best things globetrotters consider doing. The interesting thing about it is that many couples choose this destination because of the magic that surrounds it, that romantic atmosphere, it is anyone’s dream honeymoon. Every time we mention some place that has a gondola ride as an ingredient, we quickly move to this city. Tourist map Venice pleases us by taking you to that magical world, where you have always wanted to be, and where we will convince you that it is time for you to fulfill your dream of experiencing love, and melancholy. Venice falls in love not only because of its famous canals, its surrounding islands, its museums, palaces, squares and bridges.  There is no room for boredom here, there are many ways to go on excursions and enjoy a culture that is everyone’s dream.

Venice is a historical and cultural neural network of about 120 small islands that are interconnected by almost 500 bridges. It has the particularity that since its origin, because of the floods, its foundations have been sinking, but it never loses its charm. Sometimes during the year, the rise in the water level of the Adriatic Sea causes flooding in major places such as squares, but the authorities have managed to put footbridges above that level so that the movement does not stop. Everyone loves Venice, everyone wants to come, others want to return, and even stay. It has an interesting history, since due to the geographical condition it was a natural defence to German incursions. Later it developed a power in navigation and dominion of the waterways. All this begins in the 5th century, and at first it belonged to the Roman Constantinopolitan domain. 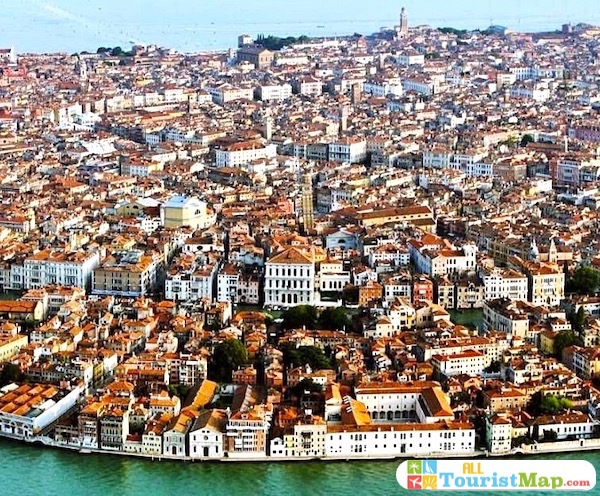 Its tourist sites, especially those concentrated in the historical centre, are world heritage. Our Venice street map shows you those essential places for an unforgettable experience, which you will surely want to repeat. The nerve centre of Venice is Piazza San Marco, which occupies a privileged place among the largest in the world. Around it there are many places ready to be admired and visited, such as the San Marco Basilica, the Doge’s Palace, or the imposing Campanile de Gioto. Within its centre and its surroundings a wide range of bars and restaurants await you to serve you an authentic local cuisine. Keep in mind that for a healthy tourism and to preserve the bohemian spirit, it is advisable not to eat in its roads, avoid bathing clothes and the use of bicycles, this is a place of pleasant walks.

Our Venice tourist guide was thought to let you know the places to visit, and to leave you speechless. You can also obtain specific information at the Venice tourist office. The routes are not complex to follow, these little islands are well connected, and the great canal is sure to serve as your central guide to take a wonderful walk in this city of love. If this destination is among your next plans, the necessary information can be found in this post, as well as our usual recommendation about the ideal accommodations to rest. It would be crazy to be here and not have experienced a journey through its gondolas, the experience is accentuated by the gondolieri that awaits with its Italian songs, and even with good stories about the city and one or two secrets of its most emblematic sites.

What to see in Venice 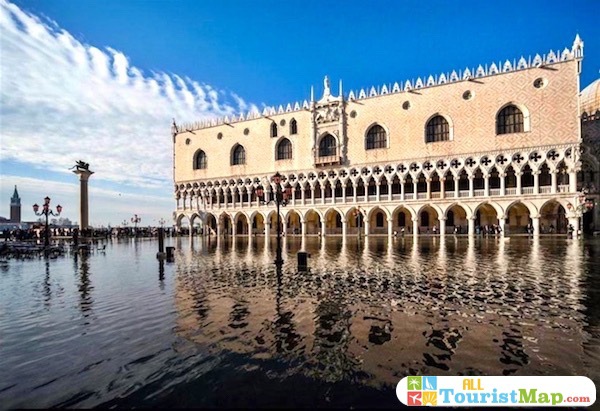 The Halls of Power and all the art found inside the palace, can move you and immerse you automatically in Medieval Europe. It’s an icon that represents power in Venice. It was built to be the residence of the Doges, but throughout its history it had different uses; one time it was a fortress and another time a prison. It is of great visual attraction and interesting for those passionate about different architectural styles, since only in that place it manages to bring together Byzantine, Gothic and Renaissance influences. Its route is composed by several rooms whose decoration leaves the tourist perplexed. In its interior it stands out for the brightness that emanates from the gilt of its staircase. The best art is concentrated in the Duke’s apartment, with paintings by important artists such as Veronés or Tintoretto. In the dungeon area it is common to hear the anecdote of the prisoner Casanova. 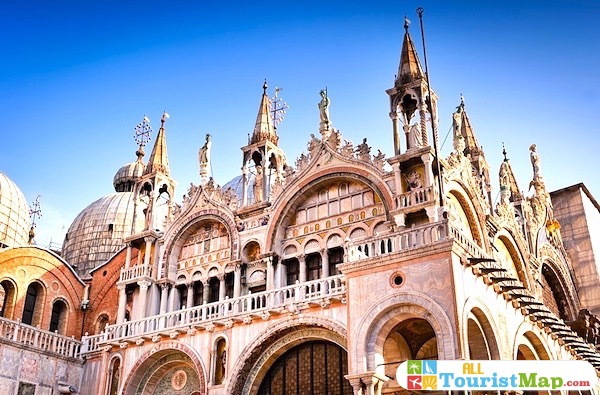 With lavish golden mosaics and marble details, this main Catholic sanctuary in the city is defined. It is the only one of its kind in Italy. It is located at a short distance from the Doge’s Palace and next to the square of the same name. What was once the private chapel of the Doges of Venice underwent many transformations over time. The current work is different from its design of 828, so it can be seen in the most select of different periods, enjoy its impressive columns of the third century and its unmissable tour of mosaics belonging to the thirteenth century, among others. It is a highly recommended location, although it is important to note that in order to enjoy it you must comply with the dress code so that you are not denied entry. The reason for so much protocol is that it is considered the center of religious life in the city. 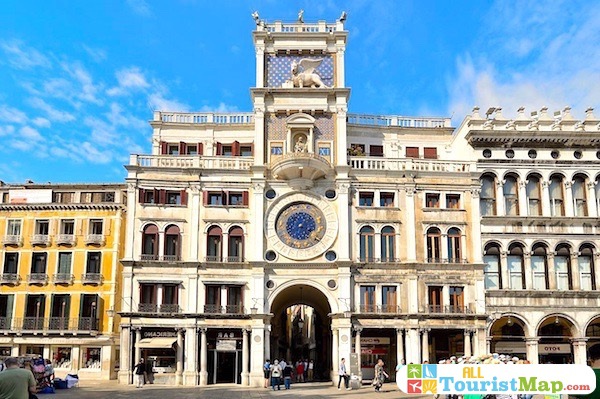 The Venetian Astronomical Clock Tower is a magnificent work of engineering and art. It is a sample of the ingenuity of the Renaissance period. This ancient work of the fifteenth century impacts those who visit it with its machinery, which is now semi-digital. The curious thing about it is that in addition to the time, it marks the zodiac signs and moon phases. It has at its top two bronze statues called “the Moors” that strike the bell every hour. In addition to its great architectural attraction and the care taken in its ornamental details, its privileged location provides incredible views. It is located in the adjacencies of the San Marcos Square and it can be accessed through guided tours, which cost 12 euros, with the right to access the Martian library, and the archaeological and Correr museums. 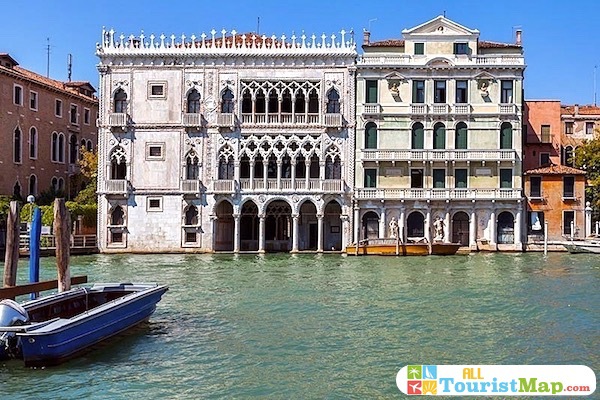 The Casa d’Oro dates back to 1413, making it one of the oldest palaces in Venice. Its name is such, because it had golden details on its marble facade. A peculiar feature in this construction, as in the others in Venice, is the unbalance in its facade. Perhaps because the years under the unstable ground are already beginning to take their toll on the hand of man.  It is located exactly in front of the Grand Canal. Its recessed columns can be accessed directly from the boat. It has been renovated and restored many times, so that it maintains its elegant and impressive details. In its interior it houses outstanding works of great artists such as: Andrea Mantegna, Tulio Lombardo among others. In short, a place worth not missing. 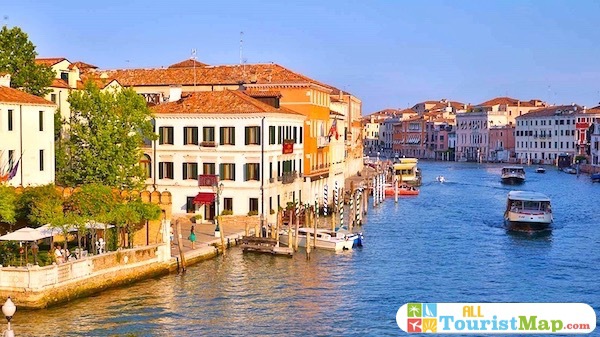 One of the biggest attractions of this city, and the backbone of the canal system that gives it that special feature. All the magic evoked by its canals during gondola rides has an origin, the Grand Canal. It is an unbeatable location to tour around and get to know the entire city, as it owes its fame to its great length. As you go along it, you can get to know many of the most interesting places in the city. The walk along the Grand Canal is a real pleasure that is usually accompanied by music inside the gondola. There is also the possibility of boarding a ferry or a vaporetto. While you get one of the most exquisite evenings of your life, you can admire the contrast that the sky draws with the architecture of different centuries, in the palaces, houses and buildings that are found along the way. 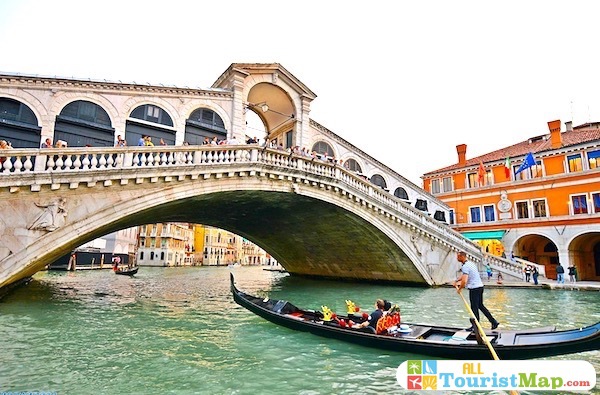 A jewel of Venetian architecture, an emblem of the city for being the one with the longest life; it is also located across the Grand Canal. So for its privileged location, from it you can get wonderful views of the city. All around it there are various places and little stalls that provide entertainment to its visitors, where its main acquisition is usually a mask, one of those we usually see on TV, and very popular in the famous carnivals of Venice. The beauty of the place makes such an echo, that it receives a lot of visitors every day. If you aspire to appreciate every detail with tranquility, the most recommendable thing is to go in the mornings, very early, or already more at night. This one has gone through a series of reconstructions. For the XVI, XV and XVI centuries the bridge has suffered collapses, due to accidents or the same weight of crowds. 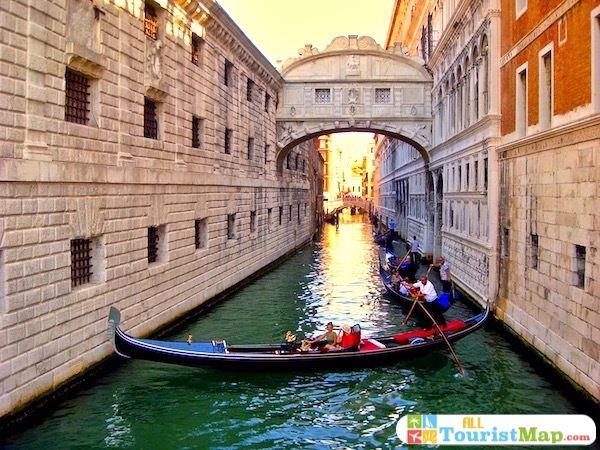 There’s no place more romantic than the Bridge of Sighs.  Legend has it that if you kiss your partner just as you pass under it in a gondola, your love will last forever. It also honors his name if you make a sigh next to your beloved will remain united for eternity. Beyond its role as a bridge, the simple fact of crossing it, leads to a kind of temporary portal or nostalgia that deserves to be valued. The bridge has its origin in the seventeenth century and its vault generated an echo product of the prayers of the prisoners when passing under it, as the last station before his execution. Moreover, it was the link between the prison and the Doge’s Palace at the time of the Inquisition. You can ask for a package that starts from the Doge’s Palace and includes this bridge. 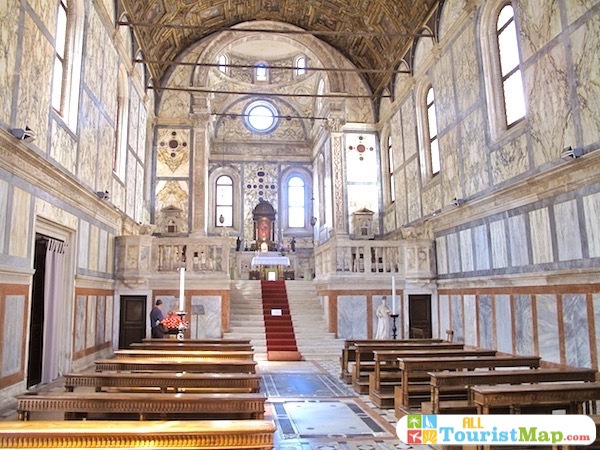 This attractive Renaissance work dates from 1489 and was started 8 years earlier. It is a small Catholic church attached to the Jewish quarter. It is commonly known as “the marble church”; inside its walls are decorated entirely with white, pink and grey marble. What most attracts the arrival of locals and foreigners to this place is that its facilities have a painting of the Virgin Mary to which a series of miracles are attributed. Since 1470, the belief that this painting had saved someone’s life began.  Since then, they have made many pilgrimages to meet her. It is a lost jewel that comes to light in a tour of the city, the simplicity and beauty of its meticulously carved details, highly recommended in your route of sites to visit. 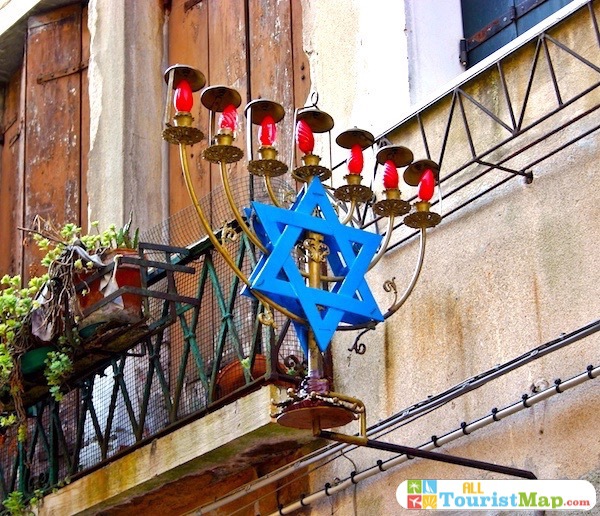 This ghetto began in the 16th and 17th centuries. It is an obligatory settlement for this ethnic group, forming the first settlement of this category. So we can say that we are in the oldest Jewish quarter in the world. Due to the enormous influence that comes from this city, its culture has been transferred by the coloring that represents it, being represented in the picturesque of its corners. Its history and legacy are preserved in the Museu Comunità Ebraica, or in Christian, the Jewish Museum.  This confinement ended at the time of Napoleon Bonaparte; he was granted freedom in 1797 after the conquest of the city. This place is located in the northeast of Venice.

Staying in Venice is expensive, so you must have the budget to complete a real escape to this pleasant city. Your future satisfaction will thank you and your loved one’s of course. Whether you’re staying in the north wing or the San Marco, the size of Venice makes it easy to get around. Venice Hotel Map shows you all the skilful options so that you can decide which one suits you best. Our recommendation is the Hotel Atlantide, it is an option, not so expensive and discreet at the same time. It is located a little more than 2 kilometers from San Marcos Square. It has all the amenities that a good 3-star hotel can offer, including room service and comfortable rooms for the whole family.