In Italy there is no city more loaded with art than Florence, and this generates a dilemma among tourists when they don’t decide what to see first, since the first one with its many works makes it difficult. Tourist map Florence is designed as a guide to take into account all the essentials before going in person. We will give you the reasons why this should be your next tourist destination; a city that is the cradle of important historical events and great figures of world art. Characters like Da Vinci, Michelangelo or Boccaccio are favourite sons of this heritage city. Moreover, Florence has a huge political, economic and philosophical legacy, so that it cannot be ignored as the neuralgic city of Tuscany and Italy itself, as well as by international tourism. The invitation is to know in depth what it keeps in its corners and other ways to enjoy this heritage city.

The Tuscany Region has its own political-economic, cultural and artistic heritage. Florence, the capital of the metropolitan region of the same name, is an epicentre full of history and life. All this power had development in the Middle Ages, where the Renaissance gave its first appearance but then influence the world. In general, its heritage is considered a world artistic nerve centre, which makes it one of the most spectacular cities. It is home to almost 400,000 people in just 104 square kilometers, which makes it very populous, not counting the almost half a million distributed throughout its metropolitan region. It is a very hot city in summer, with temperatures that can exceed 35ºC, giving it the subtropical category, however, its winters are usually humid and the ground temperature can reach -5ºC. 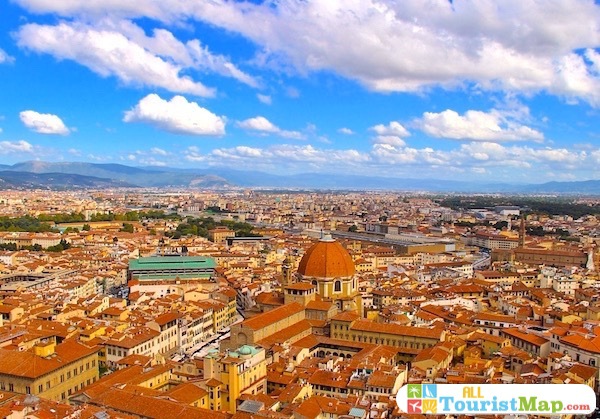 The enormous influence of the Renaissance, including the Gothic among other trends were the facade for multitudes of chronicles that marked important guidelines in history, along with artistic characters, politicians and old empires have left a legacy worth enjoying. The different tourist sites are prioritized in its historical center, which with a street map of Florence you can choose where to start. The route is varied and the Basilica of San Lorenzo is a good option for its antiquity and for being a mausoleum of important dynasties. The tour can be spiced up with the Gallery of the Academy or Ufizzi. The different palaces are waiting to be discovered by your eyes thirsty for fine arts, and even Michelangelo’s square. Please note that the Florence tourist office provides complete information and helps newcomers to enjoy the city without any hardship.

Our Florence tourist guide puts in your hands the best information regarding tourist places. Florence is a destination that always generates concern for the number of places to choose to see. Here we guide you with the routes to take so that at every step you find those places in an orderly manner, and even those where you can access and enjoy beautiful views of Florence, as well as enjoy its unbeatable Italian cuisine. Many choose this city within packages that include cities like Rome in a quick tour. The truth is that this city needs more than that time to feel all the magic of Florentine art. Stay with us and we will show you why to take all the time you need with the best tourist sites. And to complement this we leave you a map with the best places to stay, so get ready for this unique adventure.

What to see in Florence

Not for nothing is the most visited gallery in Florence, it brings together great names of art, such as Da Vinci, Titian, Raphael and Boteccilli, among others; it is a visual spectacle. Its construction began in 1560 for government purposes. Two decades later it became home to a number of artistic pieces belonging to the Medici. This impressive temple of art leaves locals and visitors alike with the feeling of being suspended in space and time. The sublime and exquisite nature of their works transcends all time and takes your breath away. As you walk around it, you discover and enjoy its secrets and legends while you breathe art in all its expression. As it is such a crowded place, we recommend that you reserve your ticket in order to avoid rubbing elbows with so many people. The first Sunday of every month you can enjoy this collection for free.

Its open doors have been a magnet for art lovers since 1784. It was created to provide students with drawing study materials. Today it is the second most visited gallery in Florence; the most interesting thing is that it houses some of the most renowned works of art of all times, both paintings and sculptures. So it is the ideal place to experience the greatness of art as you have never done before. The piece that takes the lead and attracts a great number of tourists is the huge white marble sculpture that consecrated Michelangelo, the original David. It is presiding over the exhibitions in the whole centre of the gallery. Needless to say, the precision and beauty with which this work was made is a spectacle worth admiring. All the overwhelming beauty of his exhibitions will accelerate your heartbeat.

It is one of the largest and longest living churches, which for 3 centuries was the main one in all Florence. It is located in a very central and accessible point of the city. It is known as the “Medici’s tomb” where the remains of 50 members of this dynasty lie. The best way to describe this temple is with the word contrast; inside you find a Latin cross basilica floor plan whose Corinthian columns divide its three naves. At the entrance the architectural richness itself decorates the space, highlighting a perfect balance between grey and white. Its Renaissance style, harmony and elegance impact the visitor and contrast with its unfinished facade that a priori does not attract much attention. So, for those who do not let themselves be confused by its exterior appearance and venture to discover the great works it contains, it will be a pleasant experience guaranteed.

It was created in the 10th century by the Dominicans and is therefore known as the first great basilica in the whole city. It has a square, bars, restaurants and shops surrounding its gigantic building. Its striking Gothic-Renaissance style attracts many tourists and the interior decorations, which include frescos, reliefs and biblical representations, will delight you. In Roman times it was built the Cloister of the Dead, where the remains of renowned Florentine families rest, also has the Chapel of the Spanish famous for its frescoes dedicated to St. Thomas, the Chapel Tornabuoni which was completed in 1490 has representations of Mary and St. John the Baptist. The tour includes many more cloisters and chapels, and there are also exhibits that include a priest’s wardrobe from different periods. The art inside the basilica will give you great enjoyment. 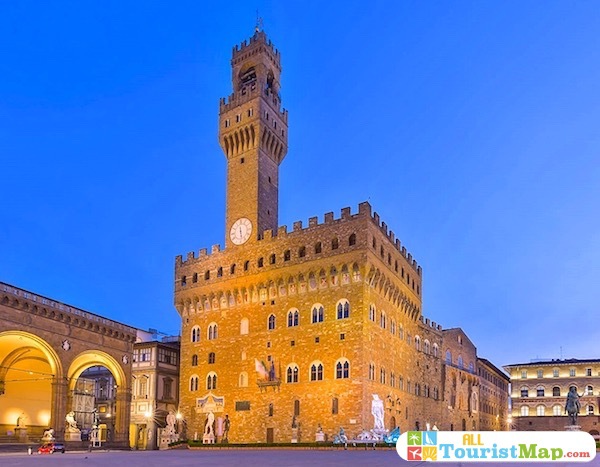 It is the town hall of Florence today although it was built as a symbol of Florentine power and wealth during the Italian wars in 1299. Interestingly, the square (Piazza dellaSignoria) where it is located was once the scene of public executions. At its entrance, in front of the wide stone walls characteristic of the palace, a replica of Michelangelo’s monumental David welcomes us. A few steps away, on a diagonal, is a gallery of statues known as the Loggia deiLazzi or Loggia dellaSignoria, a real must see. 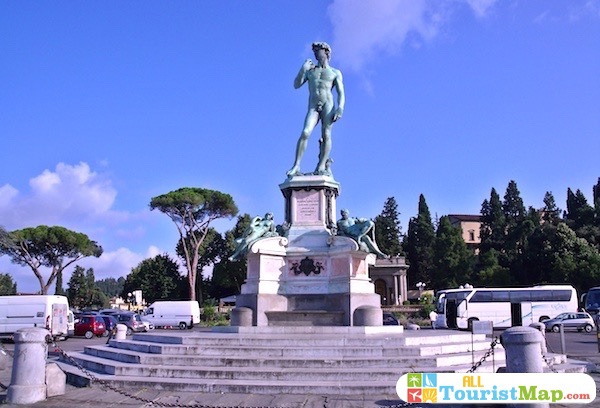 It was set up to honour the renowned Italian painter, sculptor and architect. It contains bronze copies of his most famous works. Crossing the Ponte Vecchio you will find it, which can be reached by bus, car or on foot on steep streets. This square has one of the most impressive views in all of Florence. What can be appreciated in these views is the architectural richness of the city, which expires art in every corner, such as the natural landscape, in which those interested in taking incredible pictures have the light of midday as a perfect ally. Those who wish to enjoy the views in all their splendor are recommended to visit it at sunset, whose spectacle will be an unforgettable experience for those who witness it, since it is the Florentine viewpoint par excellence. 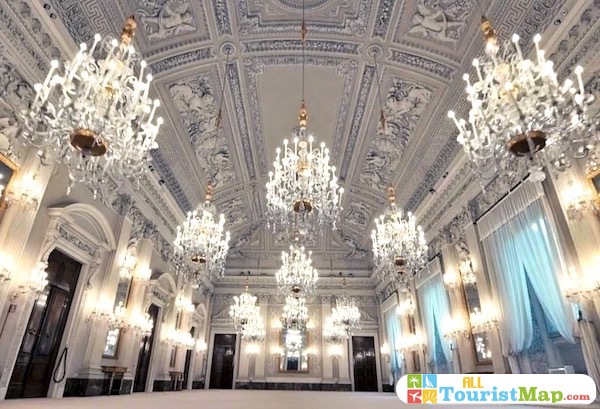 This renaissance work is located past the Arno River. It owes its name to the fact that it was built for the merchant Florentino Lucca Pitti. The idea was to build a scale model of the Medici Palace, as these families had rivalries. Its design sought to be superior in all aspects, even its huge windows would be bigger than the Medicis’ door, a fact that led the Pitti to bankruptcy. All these details can give an idea of the greatness and beauty of the palace. By irony of life, it was later acquired by the Medicis, making it their home. This made it the residence of the most powerful families in Tuscany. In the 18th century it was taken over by Napoleon and nowadays it is the biggest museum in Florence; it is so big that it is divided into several galleries and museums.

It is a few steps from Palazzo Vecchio, so it can be moved on foot without difficulty. It is located in the square with which it shares its name and is the main Franciscan basilica in Florence, which was started on the ruins of a small church on May 3rd, 1294. It is contemporary with St. Francis and was consecrated according to the Florentine calendar on January 6, 1443. One of the main attractions of this sanctuary, in addition to its architecture, is that many of the most illustrious Italians in different fields are buried here, such as Galileo, Machiavelli, Michelangelo, among others; for this reason it is called “The Temple of Italian Glories”. Although Dante’s remains are not found there since he was exiled from Florence, in this glorious temple they dedicated a moment to him. 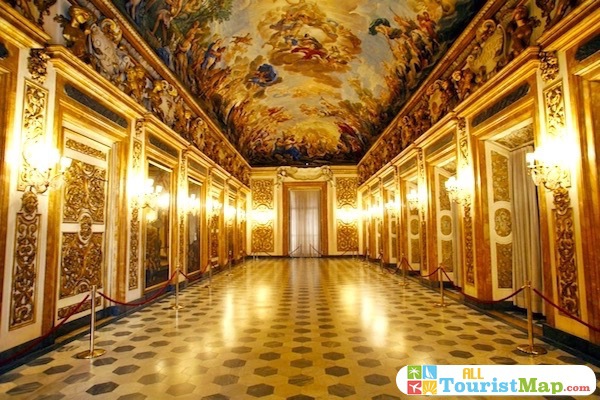 The Medicis are renowned in history for bringing the Middle Ages to an end. The money of this Tuscan family financed great works of art; thanks to this, the Renaissance era spread throughout Europe. But their style and the luxury it contains helped to define the neoclassical architecture. The pure Doric style and the asymmetry of its entrances are Michelozzo’s wonders, influenced by his master Brunelleschi. Its extravagant party room will make you imagine that you are in the middle of the most select of Italian families, in any of the many celebrations that took place there. The sumptuousness and elegance of this palace produces admiration and astonishment to everyone who visits it.

The Florentine hotel offer is usually more accessible for the budget if we compare it with cities like Venice or Rome. And when you arrive you should bear in mind that the location will define your day-to-day life. Some people tend to stay in the historical centre of Florence, where most of the tourist sites are concentrated. Another area is Fortezza da Basso, where quality and price have given it importance in the hotel industry. Map of hotels in Florence shows you all of them, pointed out according to the characteristic and location you want. In the meantime, we recommend the hotel Club Florence, given its proximity to the Cathedral of Florence, practically the rest of the important things to get there on foot. Its bedrooms guarantee serenity and comfort, ideal for a well-deserved rest. It has a nice meeting room, as well as a bar, and boasts a succulent free buffet breakfast.