Naples is the perfect combination of the artistic, the warmth of the Mediterranean, and the historical surprises of its archaeological sites. If you are one of those who escape from the enclosure of a northern city and seek refuge with its oceanic winds in an environment that saw part of Greece and ancient Rome flourish, then you cannot expect to come here. Naples tourist map takes you to that historical past, and to an approach to beautiful landscapes that its gulf offers. On the other hand it is an excellent option if you are in Pompeii or a stop before going to the volcano. Visit the city that still holds strong traditions and fascinating customs. Faith is a fundamental pillar, as well as the artistic. All this reveals a mixture; it is sure to leave you enchanted. Its streets are like living heritage, full of vitality. In addition, its ports and the coastal environment have much to offer.

Mount Vesuvius and Pompeii appear in our view if we look at Lake Naples. Ancient Naples has its origins in the 8th century BC thanks to the Greeks. Today it has an important cultural and historical heritage, making it one of the most visited tourist sites in Italy. All this reflected in its historical center, in its day to day where the art and the culture of develops in its corners like districts and streets, its crafts, folklore will impress you, the simple fact to keep a narrow Spanish connection makes it interesting. Its deposits of the old Rome are more abundant many of them located in San Lorenzo el Mayor, it has a rich history linked to the Greek influence. It has an area of 117.2 square kilometers in which about one million inhabitants live. 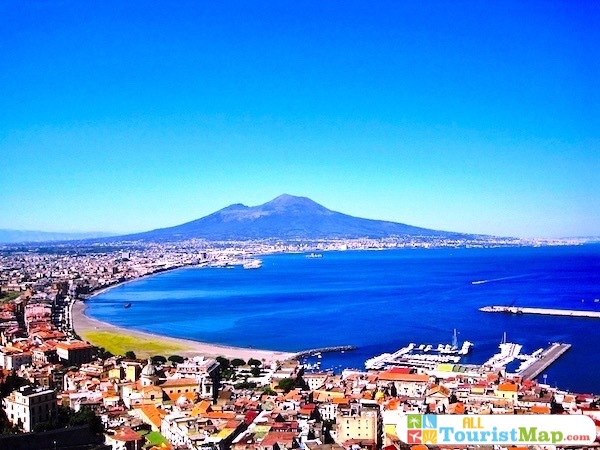 The warmth of its people infects the most introverted foreigner, here they always receive with open arms and their peculiar festive spirit, not to mention their Neapolitan cuisine. You can embark on a tour rich in tourist sites by tasting the Bay of Capri; life unfolds alongside a cool Mediterranean wind between the streets and viewpoints, or you can embark on an adventure around Mount Vesuvius to admire the majesty of this natural feature.  Naples as a purely Catholic city has some beautiful churches where people perform penances for granted miracles and faith-laden pilgrimages, for this you will have to live it visiting the Cathedral of Naples or the Basilica of St. Clare. The emotion of living a city with diverse options is transferred to the ground of the city, where a network of underground roads awaits you with a rich history that has much to tell of the city.

Tourism in Naples can be experienced on foot. In fact, visitors are aware that a whole day walking around its corners is the usual way to experience all the magic that this city transmits. Our Naples tour guide provides the essential sites for a complete visit, including which route to take. For those who prefer to go to the surroundings in search of more adventure there are tours made by tourist bus that offer different stops with picturesque places, the favorite destination of this modality is usually Vesuvius. Many tourists love Naples for the powerful view that this wonder of nature gives away. Make sure that our Naples street map allows you to experience this open-air setting in person, where the joy, the crowds of people and the dynamic nightlife could influence you to stay hooked on this destination.

What to see in Naples 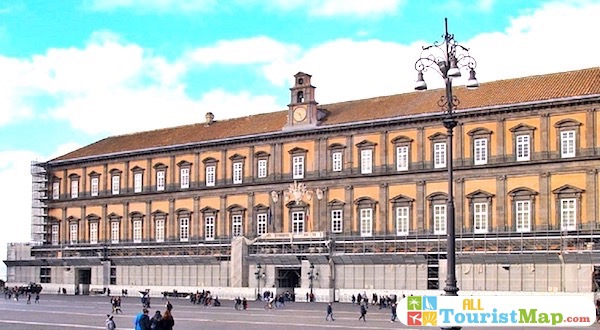 It is located in the Historical Center, specifically in the Plebiscite Square. It was built in 1603, the time of the Spanish crown’s rule. Currently its doors are open to the public and its interior consists of two wings, the Museum of the Royal Apartment and the National Library. Its restoration took more than two centuries, so the building was adapted to each style and time. As a result, its interior reflects a rich mix of Renaissance, Baroque and Neoclassical styles. Its landscape room, the King’s Studio, is very striking, as well as its decorations in art deco, together with the fine furniture in gold bath and pictorial works of famous artists, among many other elements that will offer you a tour full of culture. Its gardens are another attractive element, with a large expanse of grass and flowers. 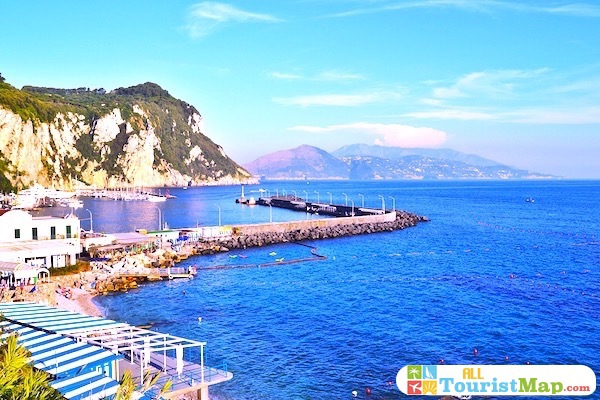 The ultimate vacation destination. This Neapolitan bay is home to exclusive hotels and commercial sites. To get to its viewpoints you have to make a long way up, but they are probably the most beautiful thing you have ever seen. Its entire network, full of pizzerias, ice-cream parlors and handicrafts, represents the Italy that everyone imagines, all the magic concentrated in its narrow streets. To get to other places, the island has private taxis with a retro design, which provides more entertainment. Not to be missed are its boat trips, which take you on a tour of the Mount of Tiberius, the Blue Grotto and many of the other landscapes that make up this earthly paradise. The Marina Grande is its port, from there you can start your water adventures. From the port to the center you can use the funicular railway enjoying the splendid views. 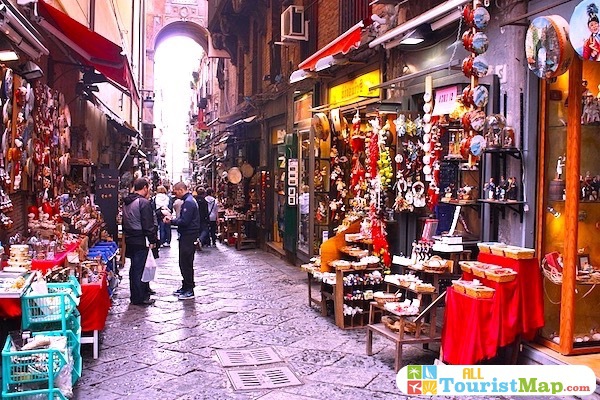 It is one of the main streets of the historical centre and one of the most characteristic of all Naples. It divides the city in two; hence its name which in English means “separator of Naples”. It is always full of tourists, as it crosses the city and has everything you need: souvenir shops, pizzerias, sales of fresh fish and local products, street musicians. When you are asked to define the bustling and quaint side of Naples, don’t forget to think of Spaccanapoli, because it is so referential. This street has an enormous impact on the city’s economy. It is a real delight to walk along this street, which is characteristic of Neapolitan life and is full of monuments such as the churches of San Domenico, San Lorenzo, San Lorenzo Maggiore. It is common to use this street as a tourist route to the San Telmo Castle and then contemplate a miniature version of the street from the viewpoint. 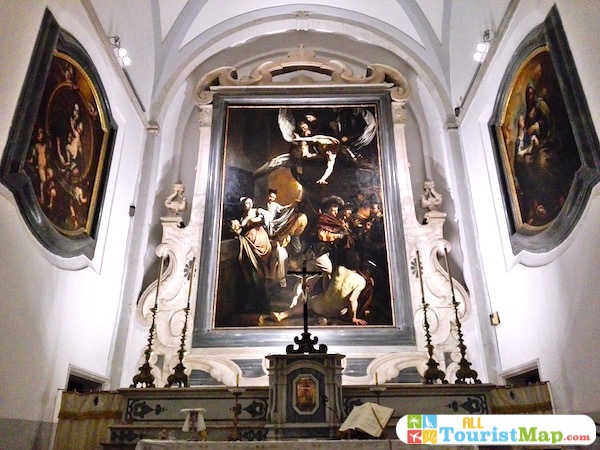 When it was built in 1606, it was nothing more than a philanthropic institution. Later it evolved so much that charity became such a good business that it became a palace, a hospital and an oratory hall. This building, today one of the most moving in Naples, evokes on the outside the most exalted baroque details. What steals the eyes and sometimes the breath of the spectators is the work of Caravaggio, illustrating in its interior the seven works of mercy; they are the main precepts of the charitable activity carried out in the place. It is worth looking for this somewhat hidden point, which continues to be a charitable center to this day. The guided tours, apart from taking you to contemplate these works, teach you everything about the works of charity. It also holds cultural events in support of the cause. 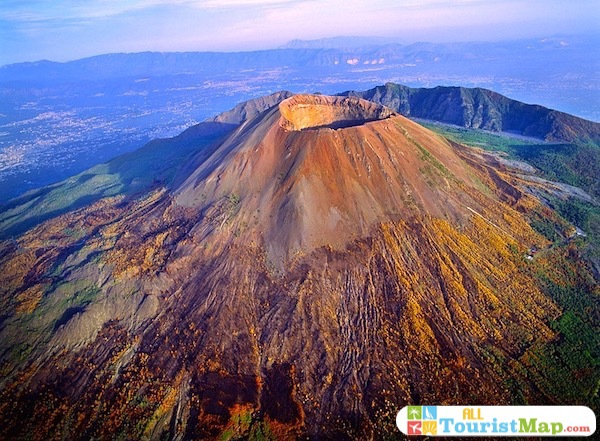 Located in the Neapolitan Gulf at about 1,281 meters above sea level. An eruption in 79 A.D. covered the city of Pompeii, making it famous and making it one of the most feared volcanoes in the world today. The path of ascent can be a bit complicated, but you can help yourself with “the support sticks” that you are given before climbing. Let yourself be carried away by the beauty of the landscapes that will accompany you during the route. At the end of the ascent, right at the top, the view you get is so beautiful that it rewards any effort you may have made during this steep climb. The crater really impresses, it makes us appreciate and respect nature. The visit to the ruins of Pompeii itself allows you to evoke a little of the emotion of that period that resulted from the famous eruption.

Basilica and Convent of Santa Chiara

This work was a convent of Franciscan nuns in the Gothic style. It was developed between the years 1310 and 1340, built on immense Roman thermal baths. It is one of the largest buildings in the entire historical centre. Inside we can find its famous cloisters, museums and remains of archaeological excavations. At its entrance a bell tower of enormous dimensions is visible. It is located in front of the Church of Vesuvius, right next to the Obelisk of the Immaculate Conception. Once inside, the tour begins with the monastery, but what attracts the visitor most and is even one of the emblems of Naples, the centre of one of the cloisters, whose open-air columns, decorated with tiles, resemble a Neapolitan version of Eden. Many chapels decorate the temple which is sheltered within its high walls and which managed to survive even the Second World War. 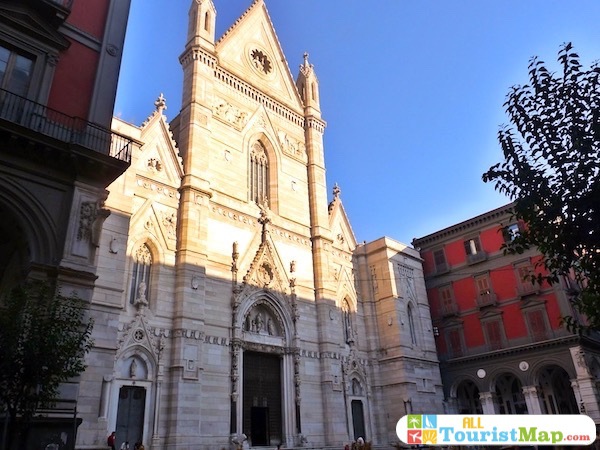 On the foundations of an ancient temple to Apollo, stands what is now the most important religious monument in the city. It currently pays homage to Saint Gennaro, the protector of Naples. The cathedral also features a mixture of Gothic, Baroque and later Neo-Gothic styles. It also has many silver sculptures, 51 to be exact. The statue of Saint Gennaro and capsules where his blood is preserved are paraphernalia of a ritual that takes place every anniversary of his death and unites all Neapolitans. Travellers who are adept at sacred art will find their place in this fantastic temple. As in all the sanctuaries of Naples, its entrance is absolutely free. You can enter in groups with a guide who will accompany you with stories of everything related to each work on display. You can also enter alone and see what the Neapolitan cathedral has to offer its visitors. 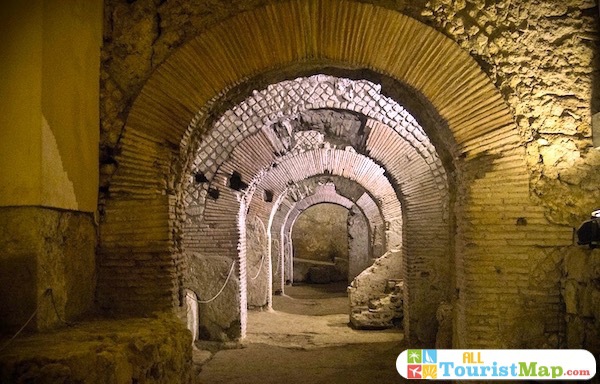 Naples not only has for its tourists attractions that are shown to the light. There is another Naples below, less known and much more mysterious, as a tourist attraction for about 2 decades. At the same time it holds secrets from a few thousand years ago. Its set of tunnels and labyrinths allow you to know stories and archaeological remains that take you from the ancient Roman era to even the Second World War. The underground city organizes tours in which it opens a gateway to more than 2000 years of history. However, for people with claustrophobia problems the experience will not be very pleasant. For everyone else you can even choose the two-hour trip from Piazza San Gaetano with a guide, or leave from San Lorenzo Maggiore for an hour and without a guide if you don’t need one.

Map of hotels in Naples

If you want to come to this city you can find all the orientation about the most favorite places for accommodation in our map of hotels in Naples. For its originality and particular cultural heritage, it has earned an important place in the hearts of tourists, which has made it grow in tourism and project itself as a city of high hotel offerings. There is something for everyone, including many healthy options for the pocket. In any case, our recommendation is the Hotel Toledo. As in all Naples, here you will find a very warm attention under an atmosphere that inspires tranquility with modest rooms for rest. It has WiFi and its design is a bit simple but with a relaxing atmosphere that surrounds. You can get some air in the evenings on its rooftop decorated with beautiful floral plants.