Tourism in Italy is based on the search for an inspiring touch in the cultural beauty that represents all its physical and intangible heritage. Among the most visited destinations by international tourism is Milan, a city where fashion, glamour, development and good football have a place. Tourist map Milan offers you the opportunity to take a tour of this fantastic city. The city of glamour welcomes visitors through its main shopping centres. Milan is also known for its wealth of monuments. Its main architectural works are true gems; your eyes will be glued to so many details in its churches, galleries and museums. But above all its legendary shopping centres where great brands of tradition and vanguard come to life. And of course, there are endless gastronomic options and bars, which are always full of tourists.

Milan has a lot to show for itself, obviously its history is closely linked to its commercial spirit. All of this dates back to the 7th century B.C., positioning it within the longest commercial boundaries in all of Europe. In fact, the construction of its main cathedral, the Duomo, was made possible by the money raised from this fruitful activity. Its territorial extension covers about 180 thousand square kilometres; a bulk of 1,350,000 inhabitants make this city one of the most populated urban centres in Italy. It is the capital of Lombardy and represents an emblem in the development of the country. In fact it is the economic center of Italy and its city reflects the development in its modern buildings, which in turn make a striking nuance with the beauty of the medieval architecture of its main tourist places to visit.

Milan is a city that can be visited in a couple of days. It is ideal for a weekend, or simply a perfect excuse if your plans are to escape the routine of your city. As well as the main ones with attractive tours, which include walking or tourist bus tours. There are many must-see places Medieval art stands out in the uniqueness of the Plaza Mercanti, one of the most popular squares in the city surrounded by numerous historical sites. Its most popular shopping streets can be walked in a whole day taking as a reference one of the most popular, the Via Dante. A marvel of Renaissance art that you can’t miss is the Sforsezco Castle, which served as a recreational area for the Italian aristocracy and nobility of the 14th century. If you want to know more continue reading.

I’m sure you don’t know where to start. Something that attracts attention in Milan, apart from its commerce is its culture and good atmosphere to enjoy with good companions, and even make friends in the city. In our Milan tourist guide we will refer you to the most emblematic places, so that you will know a little about them and what to do there. The marked routes are designed to give you an orientation in this developed and varied metropolis. Anyway our recommendation is to get the most out of these iconic sites, as their history will help you get familiar with the spirit and essence of what Milan is today, a city where commerce, industry and culture are its main reference points.

What to see in Milan 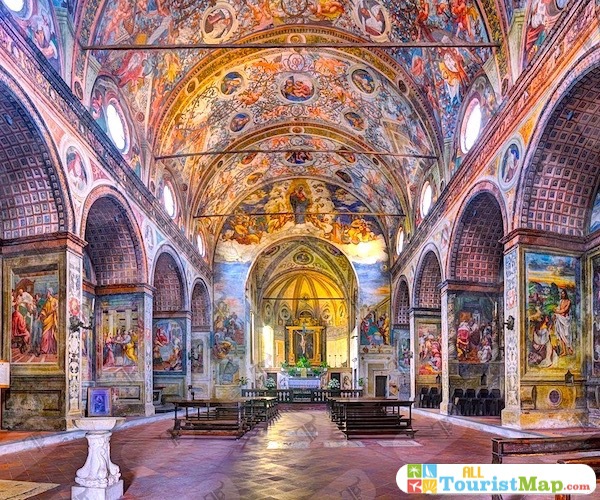 In this temple sublime elements representing both Gothic and Renaissance art are united. Among its architects, several of the great names in this discipline stand out, among which are Solari, who began its construction, and Bramante, who came to give its Renaissance touch. In its interior is sheltered one of the most iconic works of the Christian faith; the most elegant city in Italy, has the joy of possessing this world heritage by UNESCO; nothing more and nothing less than the mural of “The Last Supper”. This detail is the main motor of the affluence of tourists, the simple fact of appreciating this painting realized by Leonardo Da Vinci. You must book well in advance, so that you do not miss to admire this wonder recognized all over the planet, while you listen to the story of its elaboration. 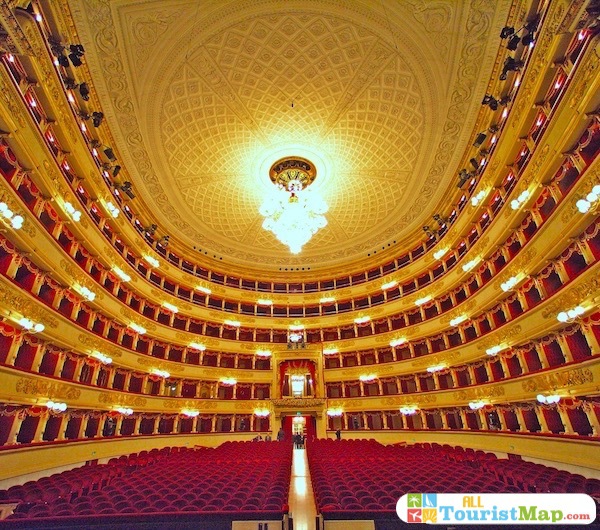 This internationally famous theatre has been receiving theatre and opera greats on its stages since 1778. The select has reached such a point that nowadays it would be an honor for any exponent to step on its boards. Those who love opera, theatre and art history will find here a good option for sophisticated entertainment. They will leave with the enormous satisfaction of having made an unforgettable visit. If you prefer a tour inside, you can opt for a guided tour through its museum, where a collection of paintings, fine clothing and even musical instruments fill this place with magic, attracting more and more visitors from all over the world. The experience of just stepping foot in one of the most famous theaters in the world could be enhanced by watching a rehearsal. 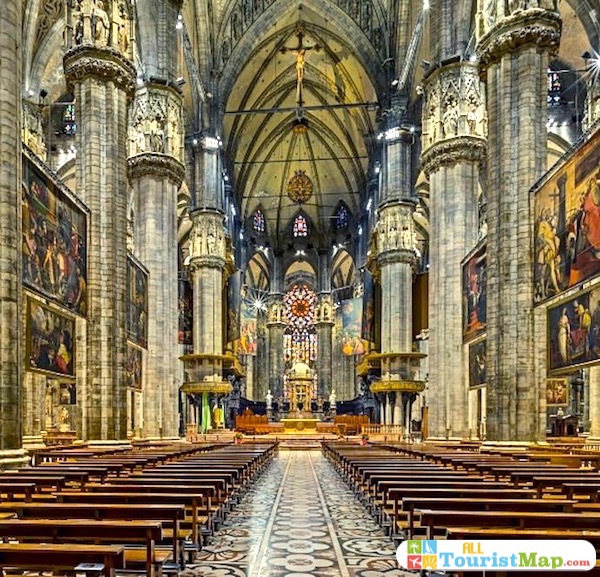 This cathedral is the most iconic thing you will see on your tour of Milan. Its architecture is a product of the ambition to give the city a beautiful space for the worship of Santa Maria Nascente. This project had a long period of time to be completed, covering the end of the 14th century and being considered by different architects until the end of the 19th century. The Gothic art is framed in fine details in the enormous length of this cathedral that has a total surface of 12 thousand square meters. It is the largest Gothic building in Italy. In its interior rests an impressive image of the virgin of little more than 4 meters high. The great quantity of sculptural works gives him a value incalculable to this cathedral with 3.400 pieces carved distributed so much inside as in the exterior of the same one. It is a real visual spectacle. 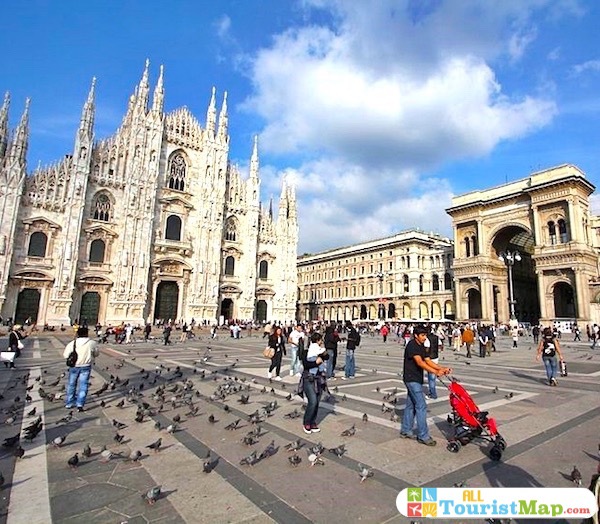 The square with its main jewel, the cathedral, is the most popular in the city. It is very close to Palazzo Reale, Palazzo Carminatti, the Gallery of Vittorio Emanuele II, among other buildings of singular beauty and importance. The large number of sculptures around it denotes the interest in projecting the fine arts of Milan. Among them is the statue of Vittorio Emanuele II, the first emperor of Italy and author of its unification. It was designed by Azzone Visconti, whose original idea was to give it a beautiful space with commercial interest. It is the heart of the city as well as the beauty of its pillars which defined the foundations of the ancient Battistery of San Giovanni Alle Fonti and the Basilica of Santa Tecla. Its location is advantageous as its north wing leads to Piazza Mercanti. 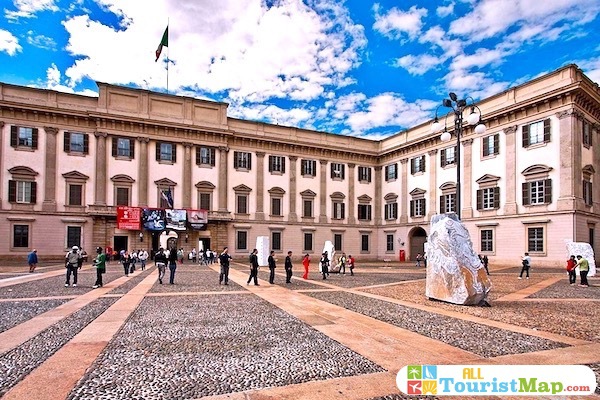 It is a reference within the cultural and architectural spaces of the city. Previously it served as a government headquarters. It offers the most interesting exhibitions and in its facilities you can find both the Cathedral Museum and the Museum of Contemporary Art; in other words, it unites the past and the present within the most innovative concepts. It was the residence of characters such as Ferdinand I and even Napoleon. It lived through historical milestones that make it even more interesting, such as the bombings during the Second World War, in which the Caryatids Hall, one of its most impressive rooms, remained uncorrupted by the siege. You will certainly not regret including it in your travel plan. This is the opportunity to discover more about historic Milan. To do this you must explore its rooms where different artistic currents were present and those who came to occupy it.

Some know it as “the Milan Salon”. You can’t get past the capital of fashion and glamour without walking the streets or shopping for the best products in town. La Galeria is a huge shopping center, with very good shops and restaurants to taste and please the palate, which also brings together the appeal of its architectural style. It was designed two centuries ago by Giusseppe Mengoni, and offers a wide variety in cultural repertoire. Inside you can find the biggest brands such as Prada, Gucci or Café Biffi. Its foundation since 1867, will make you understand the patrimonial bastion; this is not an excuse for franchises like Mcdonals to live inside. Another great experience not to be forgotten is Milan, not just any shopping centre. And to top it all off, it has beautiful mosaics and statues to pay homage to the most illustrious Italian figures. 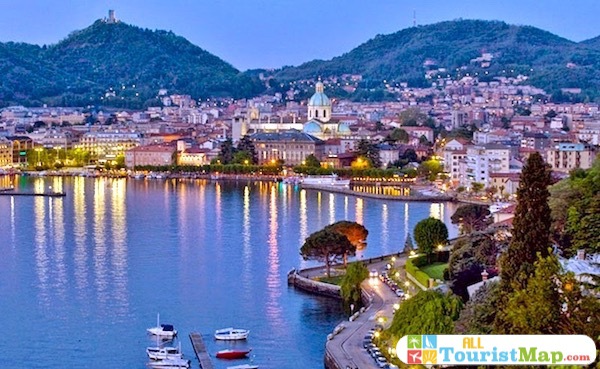 The elegant city of Italy can also offer other types of attractions for those who are interested not only in museums and fashion alone. Lake Como is not exactly in Milan, but it is very close to it, so you can take a tourist bus that offers departures with some nice stops, you can also go by train. Moving to this temple of natural beauty makes the trip worthwhile. It is the third largest lake in the country and a standard of quiet life. On its shores you can see picturesque little villages that when you visit them are pleasant to walk among narrow streets and beautiful views. It is a mandatory pareo that we recommend you take, as it will recharge your energy to continue discovering interesting destinations. Definitely not to be missed. 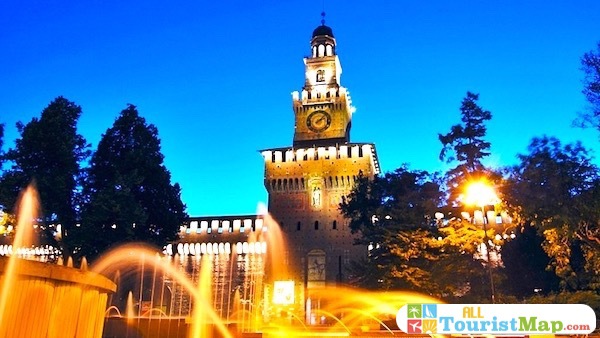 Its construction dates back to 1368. Its primary function was to serve as a defensive construction and since then it has been expanded and reconstructed on several occasions. In the Renaissance period, Sforza commissioned none other than Da Vinci and Bramante to improve its interior design. That should already offer clues to what you will find when you visit him. Due to its large extension, it has many of the best museums of the old continent, such as the Pinacoteca del Castello Sforzesco. At the beginning of the 19th century a resolution of the Emperor Napoleon led to the collapse of its defensive towers. But during that century the Milanese people opened the debate about the future of this building to make way for new urban works. Obviously, heritage interest prevailed, giving it a chance to shine after restorations and giving it the museum character it boasts today. 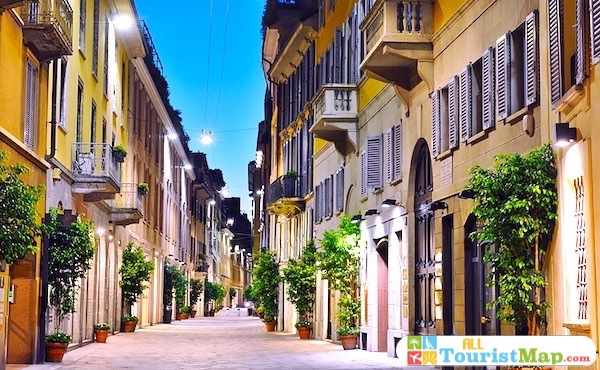 Many people come to Milan for a tour of the “in” of fashion. For lovers of glamour and the magic of design, this local icon offers the most exclusive products thanks to major internationally renowned brands and exclusive design houses all in one place. It is said that it has the most select not only in clothing, but also in furniture, jewelry, so you can hire a tourist package just to tour this fantastic place, and acquire the most prestigious of this pedestrian street, if you are interested in shopping of course (thinking big does not cost anything). This street is a point of the famous Golden Triangle of Milan; its counterparts are Via San’t Andrea and Via Montenapoleone. Its spaces are perfectly pedestrianised and it is close to Piazza del Duomo.

Staying in Milan is a bit expensive, but it’s worth having the experience of staying in this city. The most suitable hotels to arrive are usually those in the historic centre; you’ll have the most important places close by, so you can save a little on your transport budget. The comfort of staying in this privileged spot is worth the price you usually pay, as it is a neuralgic center. Tourist map Milan shows you all the accommodation options; even those in the surroundings so that you can consider the one that best suits your preferences. The Barceló Milán hotel is beautiful for its eclectic and contemporary design, the same feature for its comfortable rooms. Its 4-star service includes a gymnasium, sauna and swimming pool, and free transportation to places of interest.

Video of Milan, the most impressive tourist destinations