If you haven’t considered this city, Bologna tourist map will give you reason to come for a walk. Diverse tastes are catered for thanks to its popular entertainment venues, excellent nightlife and plenty of leisure options. The architecture and the fresh atmosphere that you can breathe through its historical centre. Besides that you can have a good time walking around its main shopping streets and trying its typical food, with the best seal of Bologna. If you wish, you can go for a walk in an adjacent village, with picturesque, beautiful and quiet environments. Simply, Bologna is a city that attracts attention for its beauty, cleanliness and high education of its people. Besides spending a few days, you will see many students in this university city hypnotized by the treasures that this city holds. We are sure the same thing will happen to you.

This city has as its strong point the tranquility, you will find various tourist sites to see, with the best medieval style, without the amount of people we usually see in other major cities of Italy. It has 385 thousand inhabitants within an area of 180 square kilometers. It’s capital of the northern region Emilia-Romagna and his history begins as an Etruscan city, which then passes into the hands of the Roman Empire. Later its golden age, the Renaissance, made it flourish in terms of architectural and artistic heritage and political center. Today it is the largest historical centre in the old continent. It is usually a favorite city among tourists who frequent Italy, it is common for those who visit it for the first time to be surprised, because although it is not so popular its tourist offer is varied and very entertaining. A day to convince you and a couple more to hypnotize you. 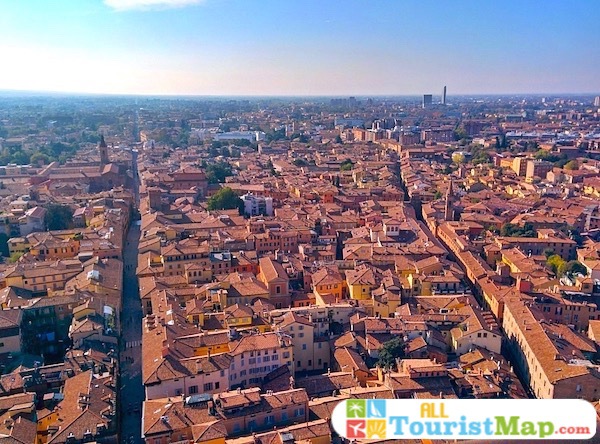 For a complete tourism what you must take into account in Bologna are the popular tourist places full of secrets and anecdotes. You can get to know the city better if you enjoy its heterogeneity, from the historical and festive along its squares. There are also churches, some of which are the centre of important events, such as the Basilica San Petronio or the Santuario di Madona di San Luca, where you will have the best views of this destination. Take a nice picture with your companions in the porticos of the city or in the curious Asinelli and Garisenda Towers. But the fun is not limited to so much architecture, give yourself a space in your stay to get a good gift at the Mercato delle Erbe, the favourite for shopping and drinking too.

Bologna is like those compact cars; small on the outside but spacious on the inside. The city lends itself to going where you want and how you want, many people choose to rent bicycles and ride around the city, it is a very popular activity among young university students. This tourist guide Bologna shows you those places you should not miss. We make sure that you have the most suitable routes and that you get a good tour of this city. The good thing is that this city has a well-controlled pedestrian and car traffic system, so you won’t find that bustle that is experienced in other populous cities. In this post we are going to recommend you the most important tourist sites so you can live them and see why it is worth to be there.

What to see in Bologna 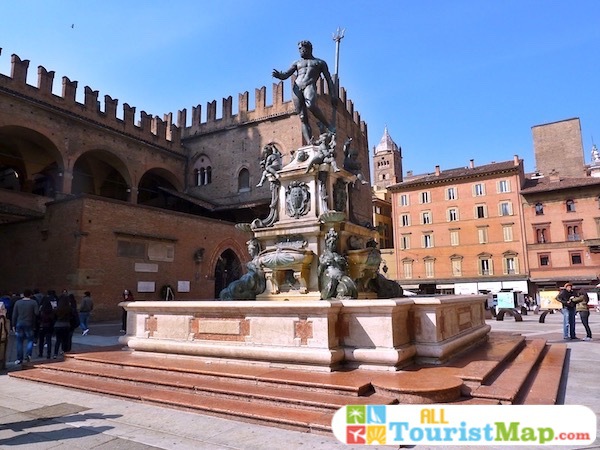 This square is located in the heart of the city, a concentration point for the Bolognese people. It was founded in the 13th century and was mainly used as a local market. Its perimeter underwent a gradual process of expansion, increasing its size to such an extent that the Vatican ordered to stop its construction; if this continued it would surpass the Vatican’s squares. Today it maintains the characteristic form of the 15th century. Surrounded by buildings of great political and economic importance, we can highlight: Palazzo di Podestá, Palazzo di Banchi, Palazzo di Acurssio, among others. This palatial emporium is the cultural epicentre and represents the beginning of any tour within Bologna. One of the most outstanding works that presides over this square is the Fountain of Neptune. The stately image of this fountain is the work of the artist Juan de Bologna.

This 14th century building dedicated to the protector of the city is the oldest and largest in Bologna and one of the largest in the world. Its size is an officially established record, placing it at number 5 on the list of the world’s largest churches. It was remodeled after World War II. Such is its majesty that it was considered to be in competition with St. Peter’s Basilica in the Vatican. Although the façade of this work is inspired by the purest French Gothic, it is still incomplete. In this way it retains its beauty like a treasure hidden within its walls. Its entrance is free, so, if you go to Bologna, you can’t miss the opportunity to tour and see the beauty of the interior of the Basilica of San Petronio.

The Towers of the Asinelli and Garisenda 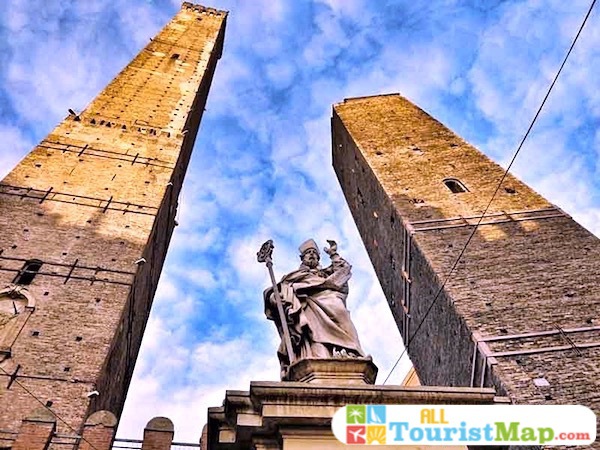 Known as the two towers of Bologna; these medieval towers become a cultural emblem of the city. Their presence was considered as a meaning of power at the time they were built during the 12th century. These two, are the only ones that remain of all those that were built. Only the Asinelli allows its entrance and ascent in its 97 meters of medieval height, it has endless stairs to the top; to reach the top you have to go through almost 500 steps. This fact serves to give you a hint about the fantastic views of the city obtained from the tower. Both have a slight slope without being so noticeable, otherwise the Leaning Tower of Pisa. The towers, together with Neptune are the icons of Bologna, a taste of medieval history that you should not miss.

The Porticos of Bologna 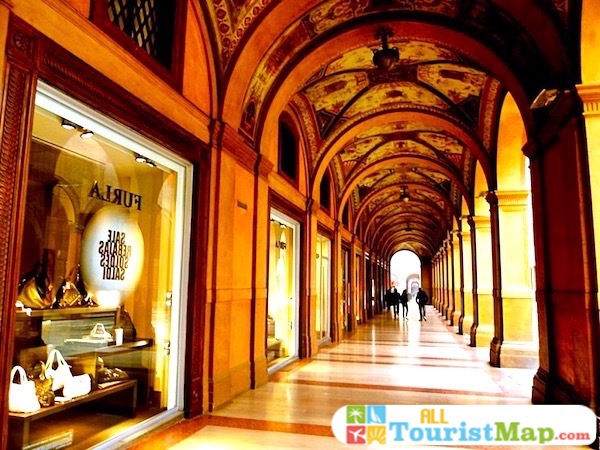 There’s a reason it’s called “the city of porticos.” Since the Middle Ages the porticos of every building have become part of Bologna’s cultural heritage. Its porticos are the longest in the world, becoming a very special Bolognese hallmark. These architectural works have an advantage due to their location over the streets of the city; they are part of the city stamp. So you won’t have to worry about the schedule in which they are exhibited, much less paying any entrance fees. You simply walk to the beginning of any street or avenue and start walking. The most characteristic portico is the one on the Via Saragozza. From the arch called Bonacorcci begins the Portico 666, nothing more and nothing less than the longest portico in the world. It is approximately 4 kilometres long and has 666 arches, hence its name. 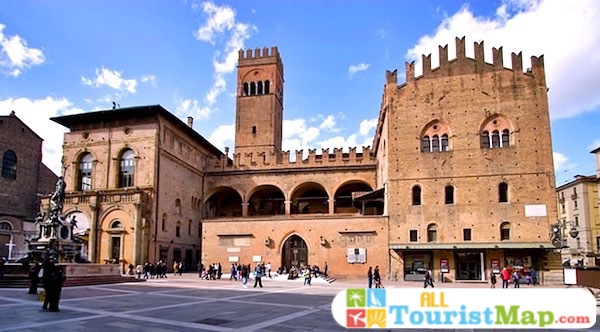 The city’s town hall, built in 1300 and also known as Accursio’s Palace, was the residence of the jurist Francesco Accursio. Nowadays, it is the headquarters of the Morandi Museum, which contains the works of the great figures of this land. This group of buildings has a magnificent architectural design product of the sum of several periods. Its size and extension is such that it occupies a whole side of Piazza Maggiore, as the palace is made up of a group of buildings that were connected for several centuries; and after its restoration in the 15th century the Clock Tower was added to it. A virgin installed in the same century of its restoration, is one of the most characteristic elements of its facade. 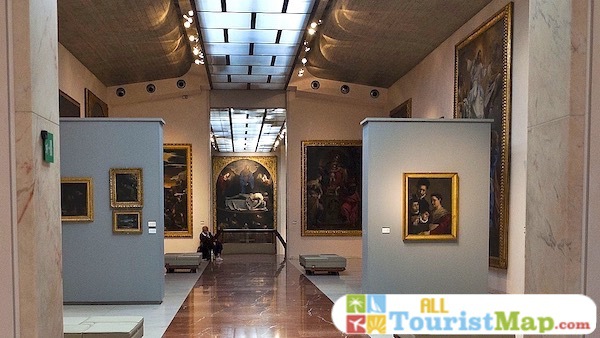 His collection is one of the most important in Italy. Italy is a country with such good museums and being the cradle of the Renaissance; with this detail that is already a lot to say. It is also in charge of preserving the artistic property of the city, that is to say; by means of this visit you will be soaked by the art of the universal history. Thanks to this you will be able to know with luxury and details the culture of Bologna. Even though in the 15th century Roman art stole all the attention, in Bologna there was a pictorial movement that the art gallery is in charge of preserving and promoting. It exposes to own names of the art like Rafael or the Caracci within its 30 halls. Over the years, the prestigious art that the art gallery has as a showcase was amassed.

It is located on the top of a hill, 300 meters high and very close to the sky of Bologna. From the sides of the sanctuary you can get impressive views of the whole city and even its airport. The access to this landscape cinema will be possible with only 5 euros allowing you to climb up to its dome. Its origin dates back to a dispute between a woman’s right to seclude herself in that place. In the end the case was won by the woman and it was established that she could stay there and receive donations from those who climbed the hill in pilgrimage to see an image of the Madonna, which had been taken there. Now the sanctuary receives a large number of visitors every year, starting from the Porta of Saragozza and after crossing the portico 666 arches arrive at the sanctuary. 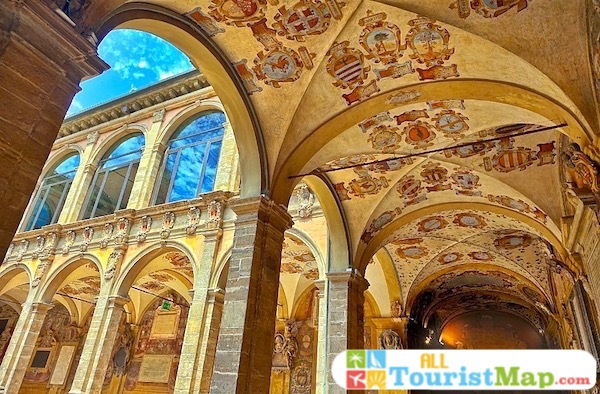 The city of Bologna is home to one of the oldest universities in the country. It came to life inside this palace between the 16th and early 19th centuries. That is why it is considered one of the most historically important palaces within the city. The great number of university remains that remain there, together with its careful decoration, will move you and make you want to be one of the many scholars who populated these halls in their golden age. You can enter certain areas free of charge, the palace opens its cloister, wide patios and its diversity of spaces available to satisfy the curiosity of visitors. On the second floor, within its main cloister, a rich variety of sculptures and a kind of trophy exhibition are displayed, possibly won by students who stood out in their respective disciplines.

Map of Hotels in Bologna

The hotel offer in Bologna is varied, from luxury hotels to backpacker accommodation in different concepts, including the popular bed and breakfast. Being a prosperous and cultural city, various events make this city their home.  Therefore you should find out how the season is going in terms of hotel vacancies so that you are not surprised that your favourite option is not available when you decide to travel. To give you an idea of all that Bologna has to offer in terms of accommodation,m our map of hotels in Bologna shows you all those listed in terms of quality and location. Nothing is more pleasant than sleeping under the bed and breakfast concept in the heart of the city. Casa Berganti offers you that possibility, under a very picturesque and artistic decorative atmosphere, with an unbeatable attention. It has very good references, especially for its jacuzzis with hydro massage.

Video of Bologna. The most impressive tourist destinations