Real and unforgettable tourism, it is the one that is lived in the most beautiful country in the world. We take you on a wonderful journey through the land of inspiration where you have all the tourist maps of France to see the most famous cities and regions. Love, and melancholy melt into an unparalleled rhythm of historical and cultural elements, typical of a society that has been an influence in all its existence. The architectural monuments are authentic marvels of the modern man, the gastronomy, the wine and the champagne have their origin here; important personages of all the times have made of France a symbol of resistance, illustration and romanticism. Its cities, starting with the capital, have an infinite variety of attractions, as do its towns and nature reserves. We prepare for you all the information you will need to consolidate your travelling spirit and encourage you to have one of the most beautiful experiences of your life.

It seems that this country was purposefully accumulating all the elements to become perhaps the best tourist destination in Europe. It has a privileged location in the old continent. There are many access points by land through Spain, Belgium, Luxembourg, Germany, Monaco, Switzerland, Andorra and Italy with exit to the Mediterranean Sea and the English Channel. Its high influence places it within the international arena as a cultural and economic power. Its high development throughout the 20th century is the result of the legacy that the monarchic, colonial and now republican culture has carved with murky strokes their generations. It possesses domains in other latitudes being insular spaces in the Pacific, Indian, Caribbean Sea and South America. Even since prehistoric times, its heritage has not ceased to surprise us with new discoveries; not to mention its golden ages during the Middle Ages and the centuries to come. 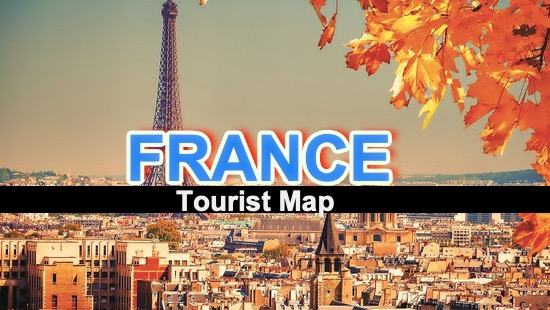 Tourism is a daily occurrence in France, especially because of its monuments that make it a favorite place for people around the world. Don’t be left with the dream of stepping on this wonderful land; venture into exploring our tourist routes and the hotel information in each city that we place on our maps. Many people choose it as a honeymoon destination, others look for inspiration in some project or work. The truth is that all of them converge with the fact that they cannot leave their main attractions aside. Paris, as the capital, has the most impressive and media-friendly attractions. History repeats itself in its other main cities; here, adventure is not limited, admiring its sweet phonetics, participating in the night life, enjoying its gastronomy and enjoying a Mediterranean climate is what makes French tourism a unique and memorable experience.

Many people who travel to France concentrate on its epicenter, Paris; perhaps because of how representative it is on a social, cultural and political level. The truth is that they are not so far from that thought since it is shared by its inhabitants, who assume that France is Paris in the full sense of the word. Better known as the City of Light, its varied corners and buildings have made it deserve to be one of the best destinations in the plans of tourists. Three elements come to mind when you arrive, see the Eiffel Tower, the Arc de Triomphe and Notredame Cathedral, and we could add the famous Louvre museum. Apart from these compulsory visits you must take into account that Paris has neighbourhoods to get lost in and a spectacular nightlife. But you cannot leave out of the list its famous cabaret Moulin Rouge.

Of Phoenician and Greek influence this important port city represents in population density the most important, of course, after Paris. Its port is the main attraction and as a nerve centre, all the roads converge in its inlet. It is the starting point for wonderful excursions to turquoise beaches and natural reservoirs. Of course a tour to its island you will find the castle of If. From there you can walk to the Panier area, the oldest site in the city where cultural exhibitions come to life, and of course the ideal place to taste the navettes, a typical sweet and the iconic dish of its gastronomy. This city has an enviable climate with sunny days most of the year and a lively atmosphere. Almost one million people live in this Mediterranean city.

Toulouse is an extremely beautiful city. Lose yourself in its streets dotted with buildings whose main element is the red of their crabs. The cordial treatment of its inhabitants traps you in an atmosphere that encloses the Mediterranean and the Pyrenees as contrasts. In addition to this, there are a variety of modern options to admire, such as aeronautical museums and elements from different periods that have influenced its history. Its streets, specifically in its historic centre, are extremely quiet; the walk becomes enjoyable when you stumble upon its pastry shops and wine shops. The Place du Capitole is an ideal place to start the tour, where you will admire the vitality of the city. The Basilica of St. Sernin and the Convent of the Jacobins are positioned as the most important religious tourist sites.

Live the renaissance through its streets. The colours of its buildings that adorn its quays and promenades are the pleasure of many. Its history dating back to 43 BC is proudly represented in its Roman theatres, exhibitions and less thoughtful corners such as restaurants and terraces. It is the ideal place to find lively shopping streets with a number of shops that lead to beautiful squares, most notably the Plaza de los Jacobinos. The tour can continue uphill to the silk quarter, as its location, on the Fourvière and Saône hills, offers one of the most beautiful historical centres listed as a UNESCO World Heritage Site. If you come in the months of October you will have the joy of enjoying the festival of lights with its natives where every corner is enlivened with a spectacular illumination that you cannot miss.