The reference point for tourism in northern Italy is Verona, a city that inspires, small but mature in history, art and culture. Land of great writers and composers, especially for being the scene of one of the most iconic romantic works of universal literature; Romeo and Juliet, which in fact, the famous Juliet’s Balcony is here, and has been the jewel of Veronese tourism. Many people come here for romantic tourism, and also to immerse themselves in the purest Middle Ages, the same ones that intellectuals like Sthendal or Goethe used as an excuse to take advantage of, and most likely was of great influence. There are about two thousand years of legacy distributed in art, culture and architecture; eternal beauty that seduces and softens even the hardest heart. Tourist map Verona takes you to this fantastic corner of northern Italy, one of the most beautiful and the one you fall in love with.

Verona was a Roman enclave for the first century B.C. Its strategic location in the north of Italy made it an important diplomatic bridge between ancient tribes, also a land and water communication axis. It emerged from the 12th and 18th centuries when different lordly hands helped it to build the largest architectural and artistic reservoir of what today seems to be taken from a fairy tale. The great contribution of the Veronese Paolo Caliari had much to do with the artistic beauty he boasts of today. Verona was immortalized thanks to the literary genre, contained in the two great works of the universal William Shakespeare: The two hidalgos of Verona, and the always romantic Romeo and Juliet. Today it has its medieval figure thanks to the characteristic of its architecture, as well as pictorial works and Roman remains; in fact, here is the third best preserved Roman coliseum. 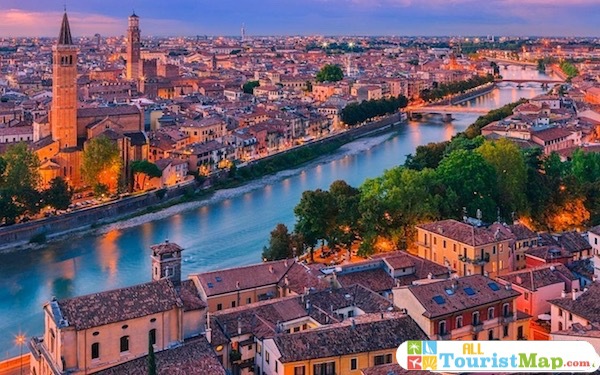 In a UNESCO heritage city, not everything is Romeo and Juliet. Of course it is the favourite attraction, but when looking for romantic spots we see that Verona keeps emotional details with which to associate this pure feeling. Tourist sites such as Piazza dei Signori Torre dei Lamberti Arco de Gavi provide beautiful views ideal for an unforgettable evening. Piazza della Erbe and the Verona arena take us back to the most remote Augustan past, whose ancient details were sources of inspiration for great thinkers. It is an experience that sharpens the senses and immerses you in a deep trance of melancholy. With the Verona tourist map that we make available you will have these places at hand for a complete tour in a couple of days.

Verona is lived on foot, every step is taken with pleasure in a city that emanates beauty and romanticism. It is the perfect place in Italy to go with that special person, or maybe a little intellectual tourism alone or accompanied. The good thing about it is that this Verona tourist guide tells you about its history, through its most emblematic buildings, colourful squares and its tradition represented in its tastes and flavours, not to mention the warmth of its people. Anyway tourism can be lived with a variant; Verona has its tourist bus system, where the tour is done in a more organized way covering each of the tourist places. What makes this system striking is that, due to its free stops, you can take breaks at will, ideal to enjoy a specific site at will.

What to see in Verona 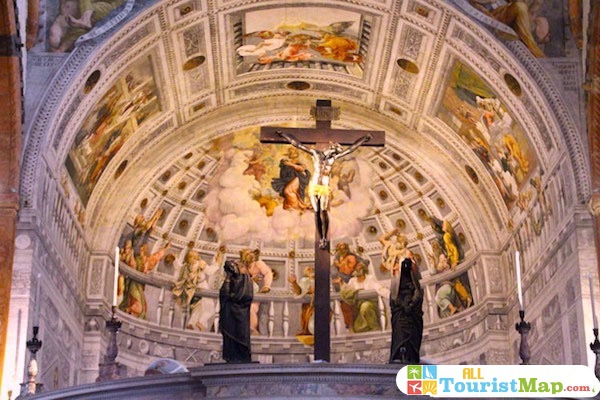 This cathedral shows the influence of different periods. Its origins date back to 380 BC, a past that is evident in the original mosaics on its floors. It was the victim of earthquakes, which is why it underwent various remodeling and it is from these that it begins to acquire Gothic finishes. It has a Romanesque facade from the 12th century that might not be very striking for tourists, but the impression it gives when you enter changes your mind. The frescos from the 14th, 15th and 16th centuries are the ones that most often steal the attention of visitors. Its silent interior is full of statues and sculptures that make an impact. Tourists can enjoy its chapels, mosaics, marble pieces and all the details that give it its beauty, faithful witnesses of different times and their stories. All this thanks to the audio guides that this temple has. 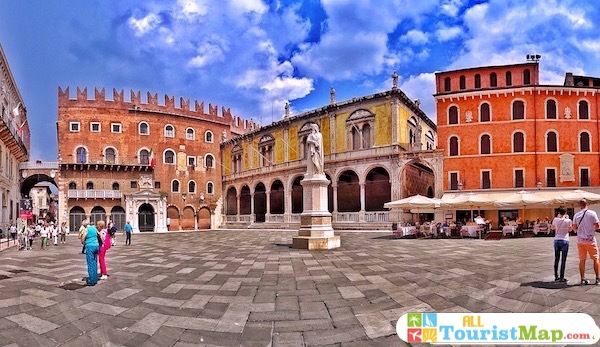 In this beautiful square an arch will welcome you. Surrounded by historical buildings, it was once the heart of the city and is now a Veronese emblem. Its Renaissance design is exquisite and it is decorated with statues of illustrious Italians. The pioneering sculpture was placed in 1865, it is the author of the Divine Comedy, Dante Alighieri. Its elegant columns are a characteristic element of the square that cannot be overlooked; typical of the Loggia del Cosiglio, they are another of the most sought-after items. When the city was in its heyday led by the Scaligeri, this was a focal point. The reason for this is the Scaligere Arch; it is a private family pantheon with Gothic sarcophagi where the remains of members of the Scaligeri lie. You won’t regret including it on your list.

It is a splendid 18th century Italian Gothic temple. Designed by Dominican friars, it stands near the Adige River in the heart of Verona’s historic centre. It owes its name to the square of the same name and although its construction lasted 120 years, its facade was never completed. It seems that all the care was taken by its 72-meter high bell tower. Its interior has twelve red marble pillars that support the vault of its ceiling and distribute the church in three corridors. It also has 16 chapels, frescoes and carved figures. There is so much art to be appreciated inside it that it is impossible to get bored. This is one of those works of art whose size and decoration deserve to be contemplated little by little, to go through it in a full way in order to enjoy and absorb all that it offers. We recommend you to take a look at it.

Tower of the Lamberti 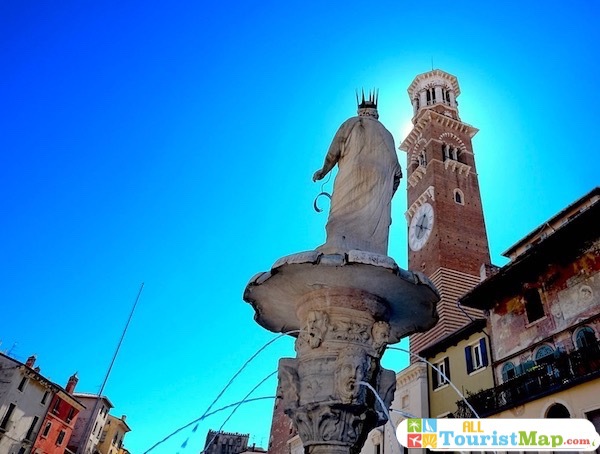 It’s the oldest building in the historical centre of Verona. It is the survivor of 4 towers that were designed for the Palazzo Comunne. Many changes have taken place in its 83 meters of height since its construction; for example an elevator inside the tower that takes you to the top and allows you to enjoy its magnificent landscape saving you about 368 steps, although whoever chooses to exercise will prefer to climb and get the top as a trophy. Its bell tower is made up of 4 bells, each one with its unique ringing that represents different messages to the Veronese people. The most important one is Rengo’s bell whose sound alerts about an imminent attack. The whole tower is worth seeing and from above you can fully admire the mountains that surround the city, as well as the flow of the Adige River. 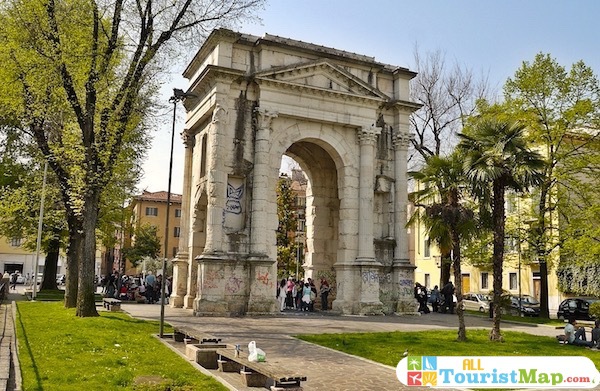 It’s an Arc de Triomphe made of white marble. It was built by a family from Verona, next to the gate of the walls that surrounded the medieval city. Nowadays it is not in its original place, because it was moved several times, according to the necessity of the historical period in which it was. It was even destroyed by the French in the Napoleonic wars, as they considered that it hindered their transit. But in 1932 its pieces were taken from the Arena, reassembled and taken to the area of Castelvecchio. The dedication put into its design is evident in the quality of its decorations, which you can admire closely. You are allowed to cross it to have a better view and not lose any detail of this work. It is one of the most striking monuments of the Roman route. 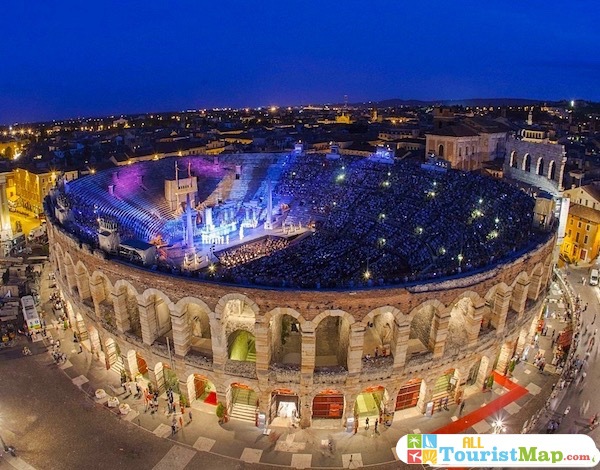 Complete sample of Roman architecture in optimal state of conservation. This amphitheatre from the first century, was the scene of sporting events, fights and theatrical performances from different corners. After its abandonment in the Middle Ages it was reopened in the Renaissance period. Besides all the history that this arena contains, it also constitutes an image of strength and endurance. This ancient building was able to withstand no more and no less than a high intensity earthquake in the 12th century, so when you need an example of something old and strong, think no more, here you will have the Arena of Verona standing. From 1900 onwards, it was decided to make use of its perfect natural acoustics, so today it manages to attract 15,000 spectators. It currently boasts the best opera performances in the world. 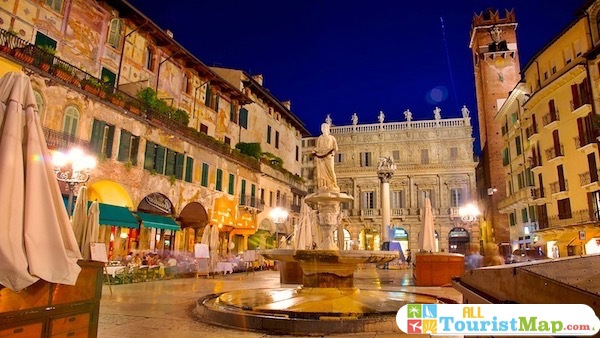 This market square previously served as a Roman forum, which gives great historical background to what is now the central square of beautiful Verona. It is bordered by important buildings; its Baroque design contrasts with the decorations of Greek gods. Although the square has fountains, walls and reliefs, its diverse styles make it an open-air museum and an ode to the varied. The highlights are the statue of the majestic Lion of St. Mark and the fountain of La Madonna located in the central point. These monuments arouse the admiration of residents and visitors, making the bustle of the square never stop. You can visit it both during the day and at night, it doesn’t matter, it is always active and lively. 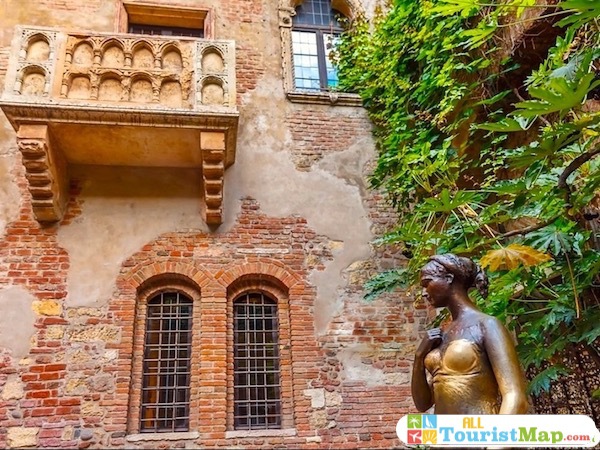 It’s a destination for romance. Shakespeare’s most famous play is set in Verona. Although the author never visited this city, the municipality in 1905 bought it from the Dal Capello family because of its resemblance to the Capulet surname. So from 1930 it became official and this house began to be marketed as Juliet’s. Many followers of the work around the world usually stand on its balcony and leave their letters in the cracks of its walls, inspired by the premise that it gives them the “happily ever after”. The house has a grill where they leave padlocks, walls where they place messages, significant in every love story. The truth is that from this house, the film spread throughout the world. Verona is definitely the city of love, or the place to find it. 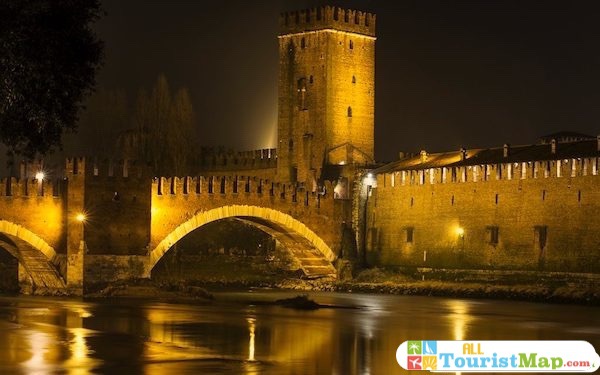 This castle was built in the year 1350. It has courtyards and outdoor areas, to which visitors are allowed access completely free of charge. The building as such is considerably deteriorated; part of it was destroyed in the Napoleonic Wars and part during the Second World War. What is left standing is being preserved, but can still be visited. For a cost of approximately 6 euros you can access the museum inside, which exhibits both paintings and sculptures. If you cross the bridge attached to the castle which bears the same name, you can enjoy the panoramic view of the city of Verona which is also part of the free tour. Don’t miss the opportunity to visit this interesting place; both the museum and the walk around its exteriors represent an extremely rewarding experience.

Vacation or escape to Verona is always related to romantic evenings. It is necessary to consider a good place to stay to enjoy with that special person authentic nights of idyll. The most suitable would be a place located in the historical center of the city, where you have the chance to hold hands and walk along its illuminated streets and contemplate the night in this city. Hotel map in Verona is in charge of offering you the best options for you to consider the one that is worthwhile. Hotel Leopardi is highly recommended for lovers of simplicity but demanding in service and attention. It is located 2 kilometers from Verona’s train station. Its rooms have a beautiful wood-based design, Jacuzzi with WiFi hydro-massage and flat screen TV.

Video of the most impressive places in Verona