In the Tuscany region this small but exceptional corner is sheltered. Its main image, the leaning tower is an icon in world tourism, however, an endless number of visual attractions contained in museums, cathedrals and squares, will make you rethink the concept that this city can only be visited by its tower, do not miss anything with this tourist map of Pisa. This page takes you to the land that saw the birth of his illustrious son Galileo Galilei, where Romanesque art dresses its main monuments, easily accessible and taking a picture here is a point in favor of our experience as travelers. The hospitality of its inhabitants is very well received by the large number of visitors and its tourist office has the doors open to provide all the necessary information. The Middle Ages and the rebirth of Tuscany concentrated in this special place are waiting for you, with its warmth and Mediterranean aroma.

Much is said about its attractions but little is known about its history, anyway there is no exact documented date to explain it. It is presumed that it had origins in the times of ancient Greece. The fact is that by the 16th century it was taking on a reputation for its port activity because its location in the central-western part of the region gave it the opportunity to connect with the Mediterranean. The capital of the province of Pisa and one of the cities that attracts the most tourism worldwide as well as its neighbor Florence. Its almost 100 thousand inhabitants occupy this small portion composed of about 185 square kilometers of surface. Its marshy conditions have allowed it that characteristic touch in its main towers at the time of construction. Thanks to this it has been a world reference in tourism and the large influx of people has brought them progress. 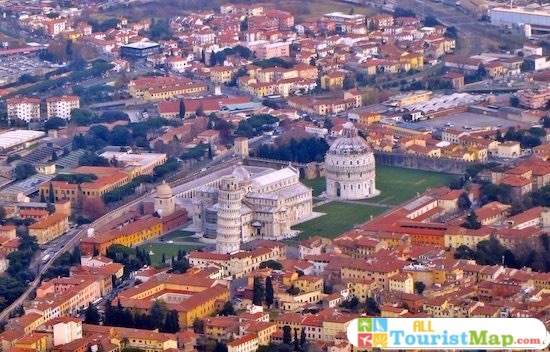 Tours around its main tourist sites can be done in a comfortable and easy way. Most of its architectural jewels are concentrated in the heart of Pisa represented by Piazza dei Miracoli. Here the impeccable marble-based Romanesque style shines in its main temples such as the Baptistery of Pisa, the Cathedral of Pisa and of course the Leaning Tower. Even Byzantine and Moorish art sneaks in its details capturing the attention of tourists. Moreover, the city has managed to bring out its monuments in the midst of the geographical accident represented by its marshy soil. A walk along the Arno River will take you to beautiful architectural landscapes as well as to nearby villages to complete the tour.

If you are in Florence, you can take advantage of Pisa as a getaway to visit the tourist sites of greatest impact. Although many people like to make a plan apart, as this small and comforting city provokes to stay a couple of days to get out of the routine. It deserves a whole day and part of the other to understand that its places are not limited to the crowds in its main square, Pisa itself is one of the cities with more souvenir shops in Italy, hobnobbing with Rome itself, and exploring its curiosities as well as its places for leisure will make you lose track of time. Continue with this Pisa tourist guide where we will put all the information regarding places to visit.

What to see in Pisa 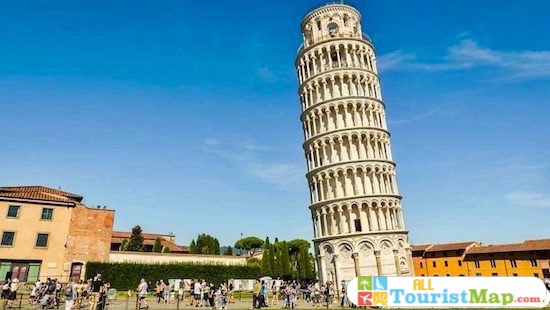 You can’t talk about Pisa without mentioning its famous leaning tower, declared a World Heritage Site by UNESCO. Designed to be a bell tower, it was built on an unstable subsoil and the general outline showed a margin of error as to the strength of its foundations, but this fact does not deny its beauty and authenticity. In 1174 construction began, which thanks to this architectural accident, was never thought of as giving it world fame and making it the Italian emblem par excellence. In fact, during the construction process, attempts were made to prevent it from leaning, leaving all those attempts in vain, without knowing that this failure of its foundations would be the reason for its charm. For all this it deserves its place among the most famous buildings in the world, and it deserves to go at least once in a lifetime to have a good perspective photo taken.

The Cathedral of Pisa

Tower and Cathedral, together are a beauty, but to admire only the Cathedral without its bell tower is also a spectacle. Free of charge, it is the main church of Pisa and its origins date back to the Middle Ages. It has its beginnings, specifically in the early eleventh century. Being designed with various style influences such as Byzantine and Islamic fulfilled the purpose of demonstrating its power and international recognition. It is possible to say that the mixture of styles that it possesses was totally planned unlike other temples. It was of great influence on the architectural style of the Tuscany region; by the period of its culmination it was the largest in Europe. Many of its decorations come from the war riots as its granite columns, to give an example. These elements contain the most appealing of each of the conquered territories. 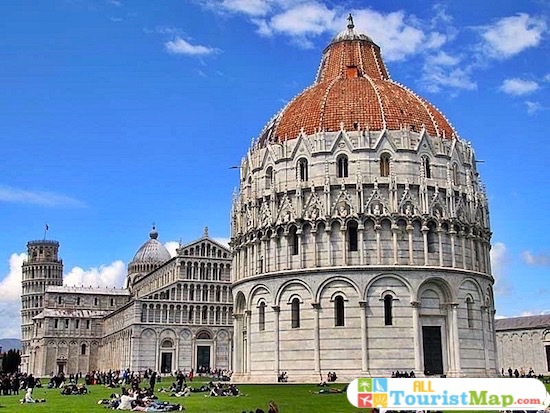 This beautiful monument is made of marble. It is the second oldest building in the city and many of those who visit it come to try to solve the enigma that its architect left in certain hidden messages scattered in certain specific points; dare to decipher it. It was built between 1,152 and 1,363 mixing the romantic and gothic architectural styles, and achieving a totally different atmosphere in each of its levels. Through it you will get wonderful views of the Duomo and the Leaning Tower without standing in long queues. A characteristic element of the Baptistery is its acoustics, which you can check to see if you can produce any sound. Its location allows you to reach it from any side of Pisa, even on foot. It is an architectural work among jewels of the same species, part of that family that also functions as a viewpoint. 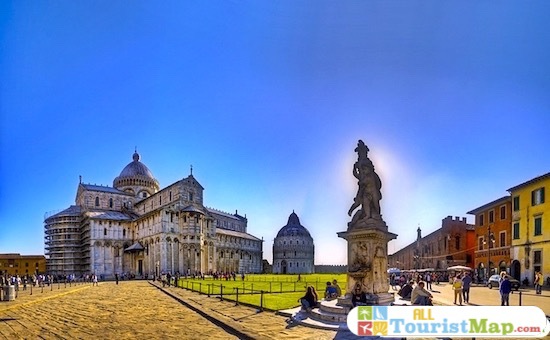 This walled square is located in the northwest of the city of Pisa. It has large gardens that are examples of care and preservation. It is named after the poet D’Annunzio. One day, he was observing from above the monuments that make it up, he could only associate it with the word miracle. Although in our days it is also known as the Duomo Square or Cathedral Square. It is among the main attractions throughout Italy and has an emblematic collection of medieval art. Access to the square is completely free. Watching the way the green of its lawn contrasts with the marble of the surrounding monuments will make you feel like that ancient poet and you will also want to have it in the background during your stay. 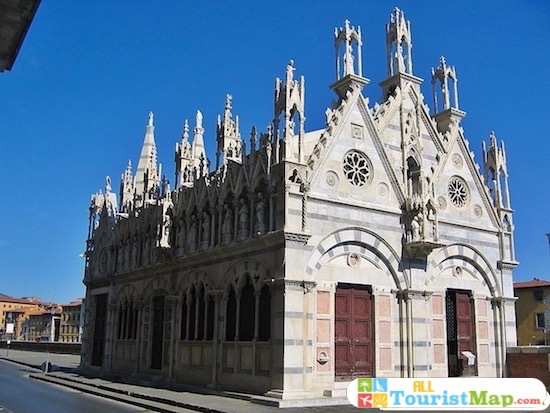 The River Arno crosses Florence and ends in Pisa. Santa Maria della Spina has stood on its banks since 1230. It is a very small church in a town that stands out for its architecture. But what it lacks in size it has in beauty. The work done on its impeccable details captures the attention of locals and foreigners alike. The concentration of so much beauty in so little space breaks the paradigm of the traditional cathedrals that are used in Italy, in relation to size and detail. By day the white marble with which it was built reflects the sun of Pisa. At night the lights of the city ennoble it in such a way that it becomes the protagonist of the moon. And in times when the river water is calm, the reflection of the church on it is a sublime visual spectacle. 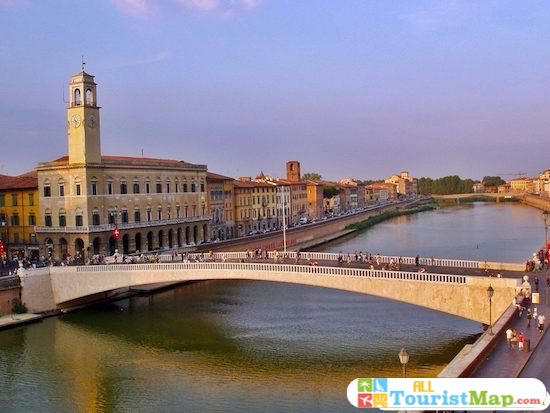 Since we are talking about the banks of the Arno River, this bridge has been crossing it since the 20th century, and it is right in the middle of the city. It starts from the Square dedicated to the famous military man Garibaldi, and ends at the Square 20 de Septiembre. The bridge, which is now in operation, is relatively new. Because it was the target of bombing during the Second World War, its original facade was severely damaged. It is the most entertaining place in town on the last Sunday in June as it is the venue for the “Gioco del Ponte” or game of the bridge, a pitched battle in which the districts of Pisa face each other for their conquest. If the date of the game does not coincide, the cement and stone construction is just as beautiful; especially if you watch the sunrise from there. 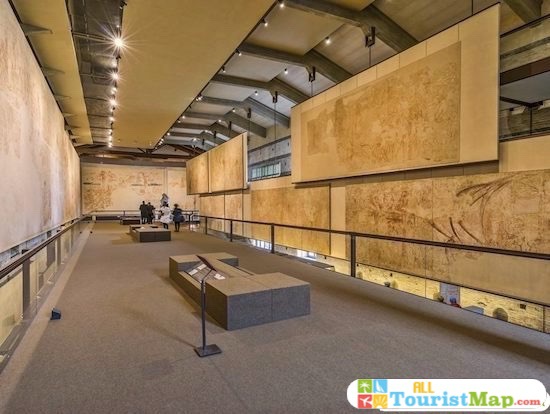 This simple construction has a brick facade, little known to the public, but with a supremely interesting content. It is the Museum of the Sinopie, located in a building that dates from the second half of the thirteenth century. It exhibits the brilliant art of his sketches. In the headquarters that until 1969 was a hospital, the sick and pilgrims were treated there. Unique in its style, it would be an interesting option for those curious about art and history. The sketches exhibited there offer the visitor a vision of how the great works it houses have been conceived from the beginning, thanks to their interpretation, as well as the first idea recorded about them. At the same time, it explains works that for various reasons have not managed to preserve their integrity until today.

Its name is the result of the characteristic blue that has been captured for a long time in its walls; property of one of the most influential families of the time. Located by the river, with its different color from those usually seen in the other facades, it is a projection to the art and culture that it houses in its museum form. It contains and exhibits works of great artistic richness from local exponents in its permanent collections.  Since it was founded in 1950, it has been dedicated to preserving and exhibiting the works of paintings and sculptures related in some way to Pisa. Touring the Blue Palace is a true journey back in time. The role played by this building as an art promoter makes it worthy of a space among the most important buildings in the city. 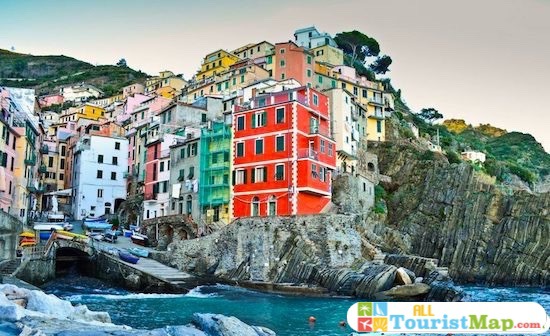 This colourful village on the coast is just a few minutes away from Pisa. After a comfortable, quick train ride you can take it at the station of La Spezia. Right at the next stop this place is ready to enjoy the beauty of Cinque Terre; an area that in ancient times was a secret paradise and today is quite touristy. It consists of 5 small villages by the sea connected by a very old road; many travellers used to come here for walking tours and whose tradition still survives today. Riomaggiore is the first stop of the tour, 9 minutes walk by train specifically. In the high part of the village, passing the castle, there is an incredible viewpoint ideal not only to observe the landscape and the terraces, but also to breathe the essence of Riomaggiore.

At this point you’ll probably have loved Pisa, as it is one of the most frequented cities in the whole region, which means you’ll spend more than one day there. So the best thing is to have good accommodation to better live the experience in Tuscany. The usual thing is to seek refuge in the city centre, where the scenery of its main monuments mixes with the sunset and sunset, becoming a real gift before the rest. Pisa’s hotel map is designed to put the various options on the table and thus choose the favourite spot according to the price-quality ratio. Hotel La Pace is centrally located, with the advantage of being close to the bus station and easy access to Piazza dei Miracoli. We recommend this simple but comfortable accommodation.
-/maphotels/flat

Video of the most impressive places in Pisa