An adventurous escape to the island of Sicily cannot be complete without a visit to Palermo. An obligatory stop to go slowly and immerse yourself in each of its corners. In Palermo tourist map we get into this city, which deserves a separate chapter. Amazing in every aspect, it shelters you with the Mediterranean charm. Many consider it the jewel in the crown in the heart of Sicily. Accidentally, it turned out to be an ostentatious villa, far from being the typical fortified city, where tourism is lived on foot, with the hubbub of its inhabitants. An endless number of activities await you on the coast and inland. Come and feel the temptation of the taste for its historical sites because of its historical mixture. Its markets, bars, shops, with its traditional pastries and gastronomy are there to stimulate our palate.

Palermo is a reservoir of many historical monuments. The art and architecture include from the Punic fights, whose vestiges still persist. Its history is written with the turbulence of numerous cultures that made this island an important bastion for its strategic location and amplitude that provides to domains of the Mediterranean Sea. From the Carthaginians to the Phoenicians, from the Arabs to the Normans; of course Rome also injected all its influence until the arrival of the Byzantines. The constant takeovers by the Europeans ended up giving it the definition that it carries today in the depths of its roots. Palermo is the capital of the region of Sicily. It has almost a million people between its urban core and the entire metropolitan area. This amount is elbowed between about 158 square kilometers of surface. 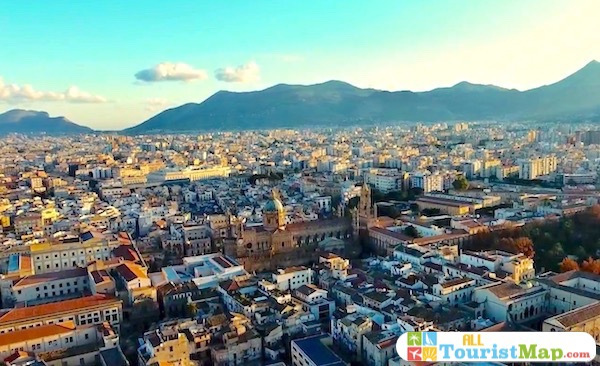 The places of interest are the object of study and discussion, thanks to the mix of cultural trends that left a deep mark. Walking around this city is a real pleasure, when you feel and contemplate those buildings that had a greater influence on its culture. The ecclesiastical complex headed by the Cathedral of Palermo; followed by the Cathedral of Monreale and Santa María del Almirante are among the most resounding in European tourism. Its places of recreation and favorite meeting points of its natives, such as Piazza Quatrocant, Piazza Pretoria and Teatro Massimo are patrimonial pride, highlighting the most beautiful of its baroque and neoclassical art. Just like these tourist sites, there are others that you cannot miss: the historical center concentrates unmatched streets in terms of gastronomic and festive offer that attracts thousands of people from all over the world every year.

Plans for a great walk can be combined with any itinerary you have of the island. But we warn you that you will be left with the desire to break with your plans when you discover the magic of this city. Regardless of the season or the area you want to explore, our Palermo tourist guide puts the best options in your hands for getting a foot in the door. The walk is the activity par excellence, due to its urban treasures as varied as the conquests it received. Check our Palermo street map where you will find the routes that will define your itinerary around every corner.

What to see in Palermo 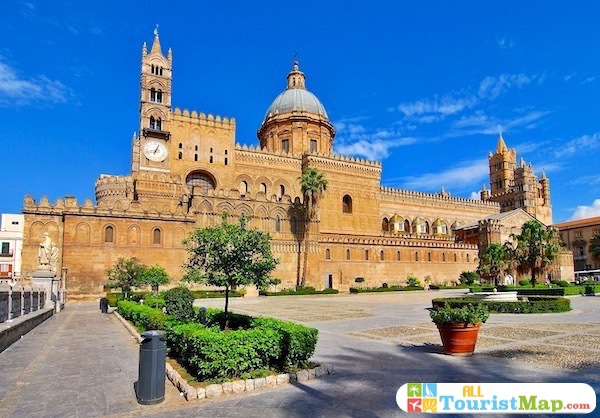 It’s the church that steals the spotlight from the tourists’ postcards. It has its origin in the 16th century, however, its construction will continue for centuries to come. This fact generated in the final work a mixture of architectural styles that coexist in harmony, as the different cultural influences in Sicily are mixed. It is located in a wide and beautiful square, near the museum of the Archbishop’s Palace. In the centre of its courtyard stands a solemn monument to Saint Rosalia. The citizens attribute to this saint the salvation of Palermo from the plague that devastated them in 1624. Its austere internal decoration makes the most impact on the visitor is its exterior that shows the Mediterranean cultures of the last 8 centuries. It is a monument worthy of contemplation, since as it has been remodelled, its beauty and extension has increased. 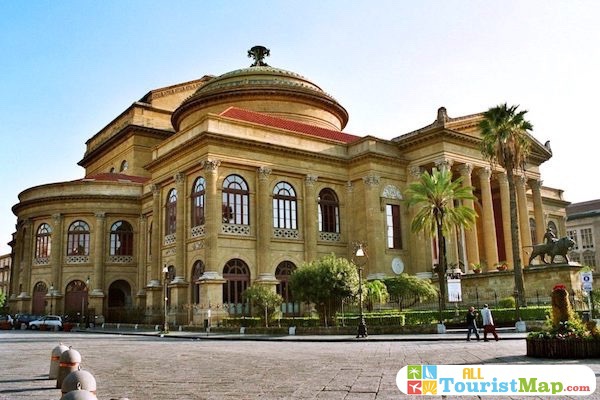 This neoclassical-style building was inaugurated in 1897 as Verdi’s masterpiece. Today it is the most important stage of Italian opera and the third largest theatre in Europe. Its horseshoe shape distribution gives it an unbeatable acoustic. Although many years have passed in which the apparent construction works have stopped its musical presentations, today it is preserved as a museum, and it exhibits clothing, working materials and models where you can see how the spaces and the scenery were distributed. You can also take guided tours of this opera temple, known for its appearance in the seventh art, as it was the location of a scene in the famous film “The Godfather”. Many fans come to have a memory of this scene. Its very well preserved architecture is one of the most important attractions of the theater.

Its construction began in 1609 and was completed in 1620. This work was decisive in the renovation of baroque Palermo. The four palaces facing the square have concave facades of Doric, Ionic and Corinthian order, which give greater visual impact, designed by Giulio Lasso. The four faces of the square represent the four neighborhoods that were founded from the urban reforms of the 500, and its four fountains are a representation of the four rivers that flowed down to the city of Palermo. They also make reference in their statues to the four saints of the city that they are: Oliva, Agate, Nymph and Christina. The beauty of each one of their details and meanings will leave you wanting to return without a doubt. This beautiful artistic heritage is located in the heart of the historical centre, which is a surprise you will find in a tour through its streets.

It is another of the most important monuments of the Sicilian capital. The immensity of this square is located in the neuralgic center of the city, surrounded by important buildings of invaluable architecture. It is also known as the square of shame, because of its proximity to a cloistered convent, whose attached and completely naked figures did not please the nuns. It is even said that several pieces had to be restored because sometimes, they were going to try to damage them during the night. The real star of the work is the Pretoria Fountain in the centre, commissioned during the remodelling of the square in the 16th century, which turned it into an example of urban planning for the time. Today it is seen as an authentic masterpiece of art that harmoniously combines architecture, culture and history. 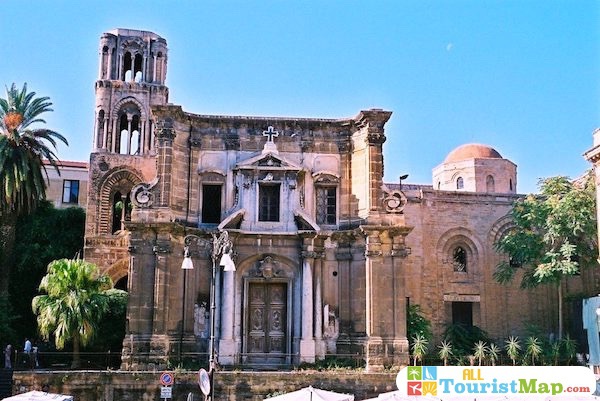 In the Historic Center of Palermo, the largest in Europe and home to much art and mystery. This place is unmistakable for its characteristic art and has been able to leave its mark on time. It is also called La Martorana, although this Norman church with its baroque façade is named in honor of Admiral Giorgio of Antioquia, who ordered it to be built next to his palace, to thank the Virgin for the protection granted during the fulfillment of his duties, the date of origin being 1143. It has been designated as one of the most admirable monuments of Christianity, so that words will not be enough to describe the majesty of its dome or its mosaics. It is better to let the elegance of its bell tower, its well-adorned columns, its Byzantine decorations and its long list of attractions speak for themselves. So you have to visit it to check it out. 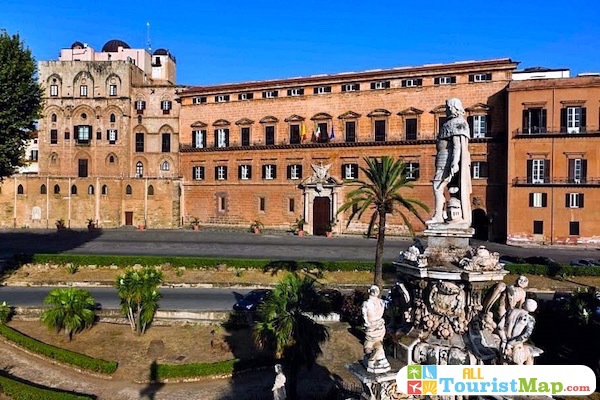 Today it is the seat of the Sicilian Regional Assembly, located in front of Victory Square. It is one of the oldest buildings. Its tenants have remodeled it over the centuries according to its functions. Inside it stands out the Palatine Chapel, located in the center of the ground floor. It is the chapel of the Norman kings, decorated with imposing mosaics and other exquisite pieces of art, a work of Muslim design from 1143. It is impossible that when you enter their exhibitions with gold backgrounds do not catch your eye. It is important that you know how to choose the date and time of your visit. It is recommended that you choose it early, almost when you open, so that you can enjoy it properly without the crowds of tourists that accumulate at the top hour, forcing you to reduce the hours at each stop. 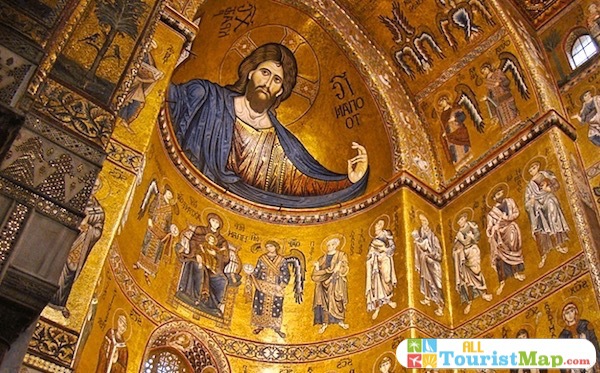 Where there was a modest church that had a cathedral founded, it was inspired by the Palatine Chapel. It was built by order of William II, and today is one of the Byzantine temples with more mosaics; in fact without the best on the planet. This architectural treasure is one of the most memorable monuments in Sicily. It is surprising to find a work of such magnitude in a small town, both its presence and its imposing nature give light and splendour to that town. From the entrance with its bronze doors, its ornaments representing biblical passages welcome you, to the gold decorations that make its interior shine between the walls and the ceiling, becoming a prominent example of Sicilian art. The cloisters and hundreds of columns are also part of this unmissable show. It is advisable to attend in the morning to ensure access and contemplate such relevant work. 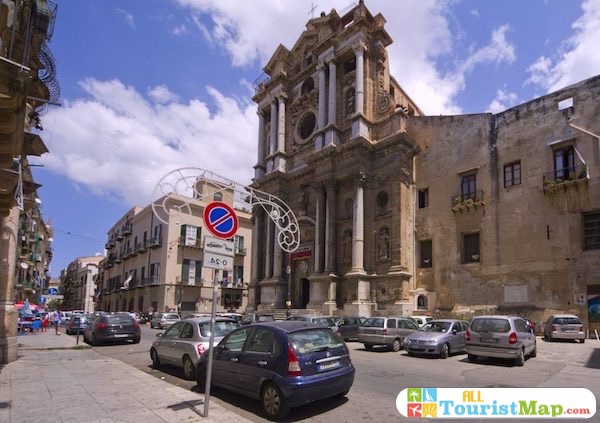 The Gate of the Greeks became the entrance of the Arabs to Palermo in 800 BC, who, since then, left an indelible mark, and the existence of La Kalsa attests to this. It is one of the oldest neighborhoods where the cultural mix is more than evident. It perfectly unites the Arab style with the Baroque. This situation gives it a unique personality and is part of its current charm. It was the target of several bombings during the Second World War, but it has gradually recovered its original and colourful shape. It is very close to the port and for his squares, small streets, particular gastronomy, monuments and big palaces project in the air echoes of past histories, sowed in the memory of his settlers and that they attract the travellers who want to know this place of so interesting histories.

Church of Santa Caterina of Alexandria

Sicilian baroque style church built in polychrome marble. Its entrance is located in Piazza Bellini and it has another façade towards Piazza Pretoria, so well designed that it perfectly combines both sides with their respective squares. It is easy to be surprised by its beauty and mix in decorative gold, but also by the stories of each of the objects displayed there. One of the ones that becomes the least expected by tourists is about an artifact on the wall, where they were placed bastards of the aristocracy; to avoid dishonor, they were placed in that artifact, which was turned around and passed to the other side of the wall where it was picked up by the nuns and taken to an orphanage. It has so much to its credit that one can say that it brings together and summarizes the history of the city.

Map of hotels in Palermo

Palermo, as the urban center and capital of the island, has a rich street tourism offer. When passing through its trusses there is no unexplored space left. Its hotels are no secret to the eye, while its location facilitates the form of tourism we want to do within the city as in the whole island. Besides, there are those who prefer to stay in the outskirts, in more discreet and intimate places away from the crowds. Our map of hotels in Palermo shows all those possibilities for you to enjoy exploring which environment or style you prefer for your accommodation. Artemisia Place Hotel is our recommendation, in terms of its proximity to the ferry terminal and its excellent location in the heart of Palermo. It has free breakfast and the bedrooms have an elegant design that inspires comfort. They have Wifi, TV and furnished balconies.

Video of the most impressive places in Palermo