Brazil tourist map invites you to take a look at this tourist destination. All our selected info will transport you to an experience full of joy. Brazil is the land of samba and international carnivals. It has more than 8 thousand square kilometers of coastline, adorned with warm and quiet beaches, bathed in sunshine throughout the year. Live the adventure exploring its great natural spectacles, where the environment and biodiversity will make you experience a conservation tourism. It is a sensational opportunity to live the emotion of its festivals, full of culture and tradition, with its friendly and hospitable people. Brazil is one of those emerging countries that condenses high altitude tourism, combining history and tradition with modern wonders. The entertainment does not stop since the joy of its dances and music is lived in every corner, and above all, the flavors of this Carioca land.

Brazil stands out as a leading option in South American tourism, highlighted by its large influx of visitors. In addition, the national tourism is very well dynamized. Its large geographical area of 8,516,000 square kilometers, gives it dominion over the Amazon territory, giving it a vast natural wealth, various reliefs, fauna and flora. Its average temperature is around 22.3°C in tropical summers and 19.8°C in fluvial winters. Due to its territorial grandeur, it borders more than 10 countries in South America, giving its border crossings a nourished flow of visitors. Although visitors from other latitudes are adventuring towards this Carioca land in search of a more exotic tourism. Its main fluvial network is the Amazon River, one of the longest rivers in the world, which frames an infinite network of tributaries that spread of life their fertile lands and full of nature, many of them still unexplored. 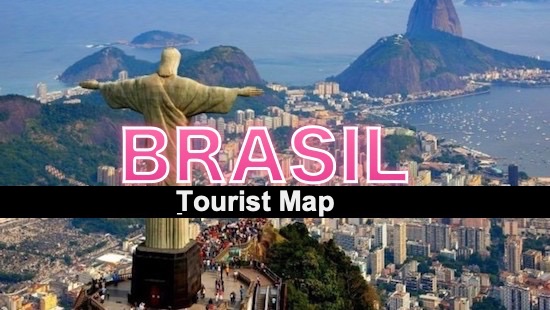 The options are varied and are scattered in different regions and ways of practicing tourism. Christ the Redeemer is a spiritual monument, emblem and image of Rio de Janeiro.  This city is considered one of the most important for tourism. Brazil has numerous museums scattered throughout its geography, such as the Sao Paulo art museum, the Portuguese language museum, or the Oscar Niemeyer museum. In the category of monuments we have the basilica of Brasilia, or the metropolitan cathedral of Sao Paulo. From its beaches we highlight the Copacabana beach, Leblón Ipanema, or Jericoacoara. Among the most popular options of ecological tourism we could highlight a trip to the Iguazu Falls, or the Sugar Loaf Mountain, located in Guanabara Bay. As you can see, Brazil has everything to choose from. Nevertheless we invite you to deepen these options as we show you their tourist cities.

This enormous city has an important weight in the economic contribution of the country, thanks to its financial and tourist activity, being the favorite point for meetings of various kinds.  Metropolis city and capital of the same name, is located in the south of the country. Its tourist offer is taken advantage of without any waste. Inside this city there is an immense urban park of about 1.584 km2. You will have ample space to ride a bicycle or attend cultural events. Sao Paulo’s aquarium is home to more than 300 species of aquatic animals, scattered in thematic areas. A guided tour of one of the most important concert halls in the world such as the Sao Paulo Hall will leave you speechless with its beauty and acoustics. Among other attractions scattered in this great city, there are excellent tourist services and catering to create a tour with all the desire.

It is another important and internationally renowned city, boasting a mixture of cultural attractions. It boasts historic and religious buildings with impressive architecture, museums and open-air art collections. It is also joined by a feast of natural paradises, which give this city a fantastic shape thanks to its mountains, such as Mount Corvocado or Sugar Loaf Mountain. It has paradisiacal beaches, among the most popular we have, Ipanema, and Copacabana. As tourist sites in this city we can visit the sports complex of Maracaná, a colossal stadium named by the locals as the “temple of the gods”. This is where important soccer matches are held, with a capacity of 200,000 souls. In addition to this the city offers a lively and nurturing nightlife. In Rio de Janeiro, celebrations and fun among friends become a reality in this charming city.

It is a fantastic city adorned with buildings dating from the sixteenth century. The capital of the state Bahia has mostly cultural African roots, which prevailed and established its influence. In addition this city is a paradise of beaches, with impeccable sands and crystalline waters. Here its carnivals gala international and millions of tourists around the world await their season to attend them and enjoy their color and joy. Given its African influence, its culture, religion, gastronomy and dance has mutated into a unique mix. This mixture attracts the attention of those who come attracted to experience its rituals and its flavors. May our guide serve as a motivator, and be a guide as you prepare your suitcases for this place full of fun.

It is the capital of Brazil and a cosmopolitan city with much cultural charm and aesthetic appeal for its impressive architecture. It’s the only city of the twentieth century that has the honor to be declared by UNESCO as a world heritage site. Its urban planning follows a symmetry such that from the sky you can see the shape of an airplane pointing to the southeast. There are many buildings and monuments to visit, as well as various opportunities for recreation and cultural entertainment. The experience is still waiting for us through guided tours for each site or set of them. Between the main points to visit we can emphasize the Cultural Complex of the Republic, the Cathedral of Brasilia, the Palace of Planalto, or the Bridge Juscelino Kubitschek.