We bring for you one of the most attractive Brazilian destinations, in this Tourist Map you will be able to enjoy in an explicit way, extracting the most relevant of each place. Taking chronologically the most important historical facts and the most visited tourist sites, can be from beaches, rivers, lagoons. You will find everything that is attractive for tourists here. We assure you that you will not waste your time, you will be enchanted with this tourist information about Jericoacoara, which is a small municipality, but has one of the most visited beaches in Brazil, come with us be part of this adventure, dive and enjoy.

It is a small municipality located in the Northeast of Brazil, with 16,447 inhabitants. It is a village of fishermen and practitioners of Windsurfing and Kitesurfing, can only be reached by vehicles optimal for sand roads. The terrain is mostly flat, being its highest point the Sierra Jericoacoara with 95 meters high. At the back of the dunes there are forests, with considerable vegetation. Their lands were the first colonized in the state by the Portuguese in 1.614 by a military expedition, it was if not until March 6, 1991 that the city of Jijoca de Jericoacoara was founded. Its climate is warm semi-arid tropical, with rains ranging from January to April. From July to December are the winds that say present. Its tourist destinations and the care of the environment are one of the most representative aspects of this region. 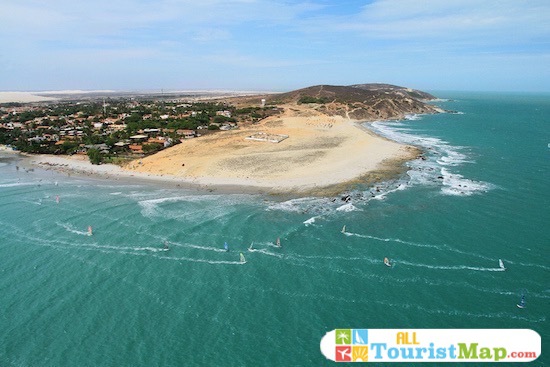 The historical center of Jericoacoara is full of historical paintings and of its hotel infrastructure, as we mentioned before, the streets of this place are paved with sand, they are parallel to each other, always having as final destination the beach. Before the airport existed, its only form of access was in 4×4 cars suitable to be on sands, buggies, however, thanks to the construction of the airport there are already scheduled up to charter flights. Its gastronomy is essentially based on; grilled meats, Mediterranean gastronomy, pizzerias, indiana, Japanese, Sushi, confectionery, coffee, crepería, artisan ice creams, elaborating plates in oven of mud, seafood and French. Jericoacoara loves us with what we have presented you, beautiful beaches, excellent food, its loving people, since each tourist that goes, emphasizes as excellent the treatment of the cearenses, with their human warmth they give the welcome to the tourists.

The best tourist places to go for a walk are here, its beautiful beaches like; jericoacoara beach, lagao do paraíso, sunset dune, blue lagoon, the best bars to enjoy a drink and to be in extremely comfortable place you need a place to visit in the city like; Samba Rock, Chico Drinks, where you can have fun and have the most refreshing and sunny day with its layas accompanied by its beautiful crystal clear waters, you will have the best service and hospitality possible in its night bars you can dance and sing karaoke with your companions.

What to visit in Jericoacoara 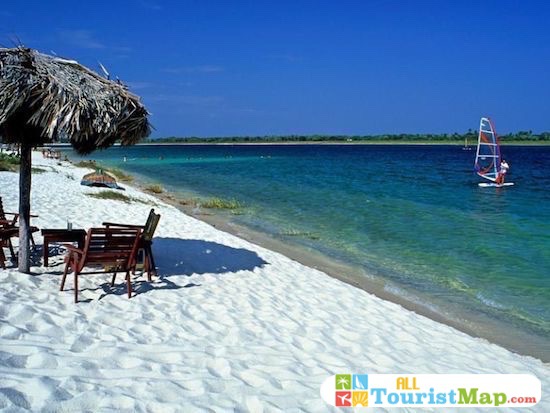 This is one of the most visited tourist beaches in Brazil, famous around the world for thousands of tourists who love nature and sport. Travellers can contemplate its nature, rivers, lagoons and beaches all year round. At this time Jijoca de Jericoacoara is one of the most important tourist destinations in the state of Ceará and throughout Brazil. It is a small village of fishermen, windsurfers and kitesurfers, known as “the northeastern paradise” for preserving its natural beauty intact. This place is reached by vehicles that can circulate on the sand, due to the opposite will be stagnant, and climb the large dunes. Some time ago this region was one of the pile, there was no electricity or any kind of services but advanced so much that now contemplates one of the most beautiful and visited infrastructure and services. 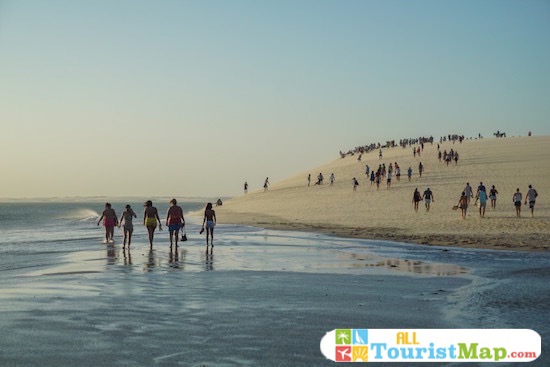 It is one of the most beautiful beaches where at sunset, you can observe its beautiful reefs, all people look for the highest place to observe better, people, both tourists and locals, climb as a walk just before sunset. Everyone looking at the horizon, the sea, and the sun that is about to submerge in the bottom and so are surprised to see the beautiful naturals it has. In this beach it is not cold, the climate is pleasant all year round. Being on top, you can observe the couples taking pictures, guitarists, others dancing capoeira, and thus all enjoy in their own way the sunset from a privileged place, in addition to bike rides.

After sunset visitors enjoy a beautiful cultural and sporting event, all gather at the seashore to dance capoeira and so everyone to the rhythm of the drum is a fantastic spectacle. 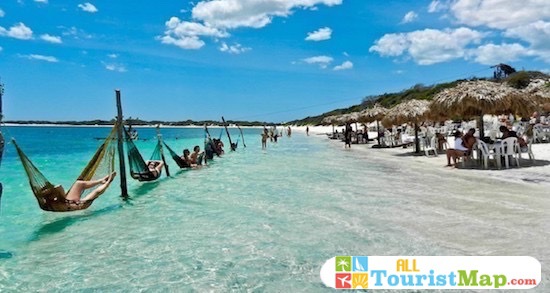 It’s one of the most visited beaches in the region for being one of the largest and cleanest, with a variety of vendors where they offer you speakers, headphones, ice cream, pareos, sunglasses and many varieties more, with bars around it in order to make you feel at ease, where you can make boat tours for each of its stops, you can enjoy the golden sand and waves, and watch the beautiful sunset by the shore, has a modest infrastructure, and to get there is through the buggy is next to another lagoon form a single. 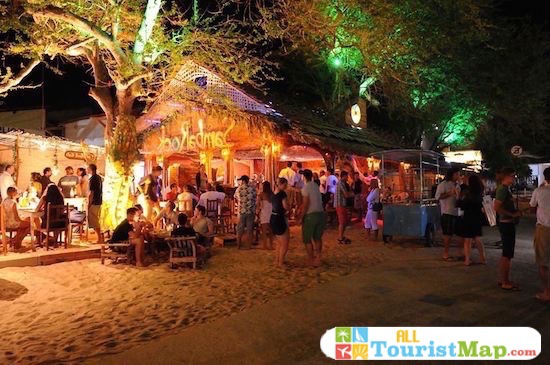 This is the best place to go out and enjoy a dinner accompanied by musical groups that is presented there we have a great service and delicious dishes that you can delight, in addition to having the best drinks prepared, its incredible hospitality in advance hand will have a waiter to whom you can make all your orders without stopping at that table, always looking for your comfort, located in the main square of jericoacoara. 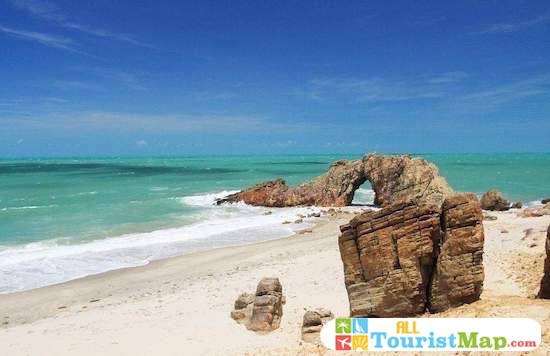 They make a good excursion and then walk along the rocks close to the sea. If you go for a few days, don’t do without this activity, if you go for several days, it’s an interesting walk, to go walking and see the sunset, the excursion is worth it. It’s a nice place but be prepared. With an incredible view there is sand and an area of rocks. You have to have patience for the photo because everyone wants one and as everywhere you make a line. 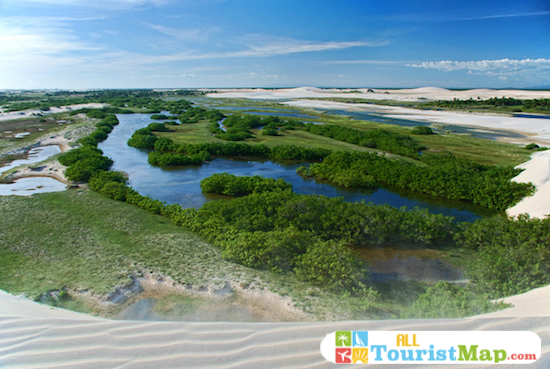 The Environmental Protection Area on Jericoacoara Beach was created in October 1984 by the Government of the State of Ceará, to protect the natural heritage of the region. This protected area had 200 square kilometers of extension, having as limits the Preá beach to the east and the Guriú beach to the west. But to prevent further environmental destruction, the IBAMA Institute, together with the state government and the Prefecture, transformed the area into the Jericoacoara National Park.

The park covers an area of almost 6,300 hectares and was created in February 2002 with the aim of protecting coastal ecosystems, as well as ensuring the preservation of its natural resources. All the charm and nature of Jericoacoara, as the locals call it, became famous due to the outstanding mention of major media outlets such as The Washington Post, Terra and Discovery Channel.

This environmental area includes extensive beaches, mangroves, lagoons, dunes and a 93-meter-high hill, known as Serrote, at the base of which sits the famous arch-shaped rock formation: the Pedra Furada. One of the main attractions of the park is the Camboa de Mangue Seco River, which is the natural habitat for the seahorse, in its three variants yellow, red and brown. It is also home to 38 species of regional birds, some of which are not found elsewhere and are in danger of extinction.

Jericoacoara has a very fragile ecosystem, which is controlled by IBAMA itself. The construction of routes and roads, as well as any type of paving, predatory fishing, hunting and any form of pollution are prohibited in the entire extensive area that protects the park.  In addition, the houses that are built cannot have more than two floors. Park authorities advise against littering on beaches, dunes, or any other place that is not a garbage can, avoid traffic of vehicles along the coast and especially in the dunes, and report cases of predatory fishing and hunting. 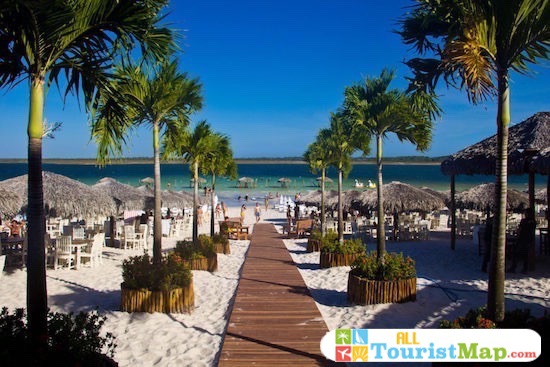 If the lake is super relaxing, the best is the atmosphere to enjoy, the hammocks make the view is the best. It has a considerable influx of street vendors, thus giving diversity of options to choose from. It is very dry season, after the rains, the lagoons are full and the walk to get there is great, because there are other lagoons on the road that are not exploited touristically. There are three different inns, all worth it. Transparent water, fine sand and white, prices are normal. Many say; It is the typical image of Jeri. It is a beautiful lagoon of warm and turquoise water with its hammocks. Very nice to go to spend the day.

Map of Hotels in Jericoacoara

Jericoacoara has a very diverse map of hotels, we present you two of them, the first is Blue Resindence; five stars, studios and elegant suites, with hotel facing the sea, with restaurant and outdoor swimming pool facing the sea, free Wi-Fi. The second is Pousada Araxá; four stars, rooms with balconies or terrace, ocean view, pizzeria, bar, free breakfast, free Wi-Fi located at. Da Dunas, 2, Vila de Jericoacoara. And a countless number of hotels, cabins and inns with the best of the best, you definitely have to visit jericoacoara, described as a tropical paradise by large telecommunications chains.

Video of Jericoacoara, the most impressive tourist destinations