An experience worth living; that’s what it’s all about, admiring the wonderful work of man and nature, and what better example than Japan? A country rising from the ashes to position itself among the technologically advanced, avant-garde and yet traditional nations, with a society of high consciousness and civilism. It is a pleasure to walk around a country that has the best preserved millenary cultures, and at the same time to jump to the overpopulated and sustainable cities. Not to mention its natural attractions, gastronomy, and its pop culture that is invading ours. Learning is something invaluable in this trip, more than for the incredible that your eyes will see, the philosophy and the ancestral will leave much in us. That’s why we prepared you before the trip with this tourist map of Japan, so that you know what to see in the land of the rising sun.

Japan is a great nation for business, exporting the best technology and the best destination throughout Asia. Its high culture allows it to be at the forefront in order, civilism and honorable customs. We are not saying that it is the perfect nation, but it is far ahead in these respects. With more than 20 million tourists a year, the country is ready to show you the best of its nature, its cities, its rich cuisine, and its fashions that seem to be stationary in time, but which combine with the futuristic touch, as suggested by the recommended tours in the main cities: Tokyo, Kyoto, Yokohama, to mention a few. Likewise, its history tells us of its wide participation after its entry into the global culture of a vast empire that went far as conquerors and conquered. 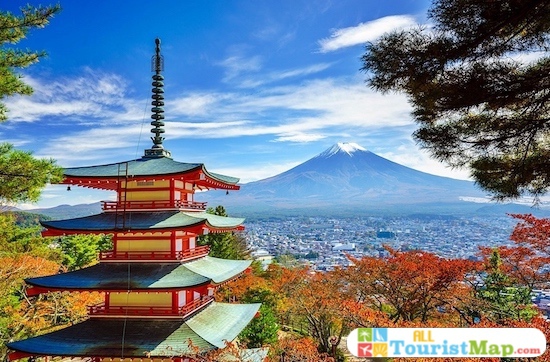 He managed to rise from the ashes after the devastating Second World War. And yet, his ancestral identity and image could not be erased, not even by transculturation. Japan managed to make the best of it and develop under its own ingenuity the most avant-garde and vital for modern man. In this order of ideas we can emphasize tourist sites that we can combine during the discovery of the treasures that wait for each one of their cities. As Disneyland Tokyo suggests. But its nature is very promising with the most amazing landscapes and hostile environments formed by Mount Fuji, Hell Valley or Hokkaido Blue Lagoon. A country that includes the most interesting spiritual trends such as Buddhism or Shintoism, which you can get to know in places like the Tadai ji temple with the Great Buddha of Nara or the Itsukushima Sanctuary.

Tourism in Japan is attractive for the modern, the spiritual, the natural and the cultural. It’s worth breaking it down by these lines and keeping up with what you need to know about the sites and what you can do to have a smooth experience. Remember that you are in a country with a high civil consciousness and respect for the sacred and the natural, so you better know where to throw your trash and how to behave, make proper use of their transportation and pedestrian crossings, but most importantly, appreciate and respect their customs. You should do this in the tourist cities you are going to visit, as well as any kind of tour around the whole country, such as the one we propose in this Japan tourist guide, where we combine the best of its main destinations, as well as cities that are supposed to be paradises with their own identity.

What to see in Japan 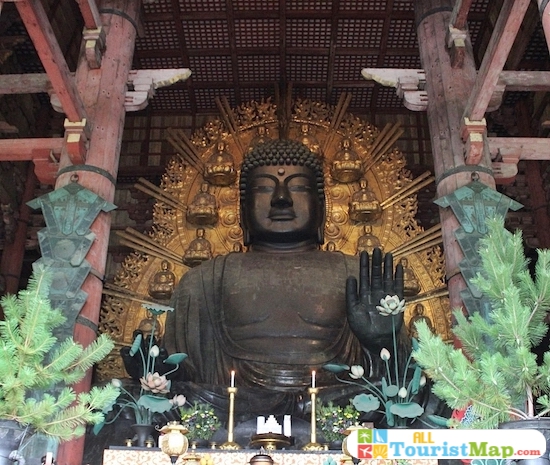 In the quest for enlightenment through such a respectable philosophy as Zen Buddhism, we tend to link with temples of worship with offerings, monks and their atmosphere. One of the most famous temples in Japan, and one that is always on the lips of travelers, is usually the Todai-Ji temple. Located in the Nara region, it houses one of the most impressive images; a large Buddha statue, 16 meters high, is already worth the trouble of making excuses not to go. It is a statue associated with myths surrounding its making. It allows its inhabitants to guide you while they tell you the story behind its uprising. It is therefore not surprising that the temple is so high; in fact it is the largest Buddhist temple in the world.

You’ll see this mountain’s image on various product brands, because it’s Japan’s most important natural monument. Its cone rises to 3,776 meters above sea level, and like it there is no other in the country. Its base is very extensive and this generates a colossal figure that miles away still makes anyone tremble. He has been in Japanese culture through poems, songs, paintings and literature, to the point that a kind of cult has even been established for him, called Fujiko. To climb the mountain, you have to be aware that conditions are favourable from the second half of the year onwards. You can travel by car or bus through different routes, and then take a glorious walk to the top. 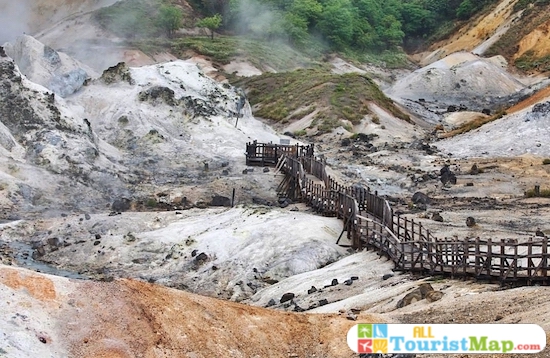 Jigoku-Dani is an immense crater that gives shape to a valley full of incredible corners. The aspect that gives to the soils and vegetation the layer of sulfur, gives the impression of an infernal atmosphere. Hence the pseudonym in popular culture, although for others this place is a real paradise. And by paradise we mean that there are several hot spring sources whose property is used for therapeutic purposes. It is as if it were the fountain of youth. Besides that the combination of the surreal environment, of vegetation, snow turns it into one of the most attractive landscapes. A giant statue of the Yukijin demon guards the entrance to this magical place from the Noboribetsu village. Be aware of the healing energy and the stories behind this mythical place. 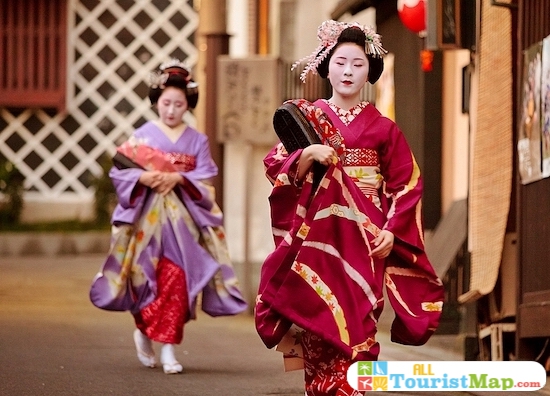 Kyoto gives you the opportunity to tour one of the most famous neighborhoods in all of Japan. In search of the most ancestral we find the Gion district; a world that shelters one of the most traditional characters with a peculiar lifestyle, the Geishas. These women currently keep alive one of the most pleasant forms of hospitality. Their entertainment centers bring you closer to these honorable characters with their hypnotizing songs, stories and dances. Many are lucky enough to have their picture taken with one of these maidens as they walk through the district. Others prefer to enjoy their services. The fact is that under an intimate and respectful atmosphere you will have an unparalleled experience. Interact in an environment that has hardly changed since its foundation. Its temples, bars, and cafes also await you in an afternoon to feed your curiosity. 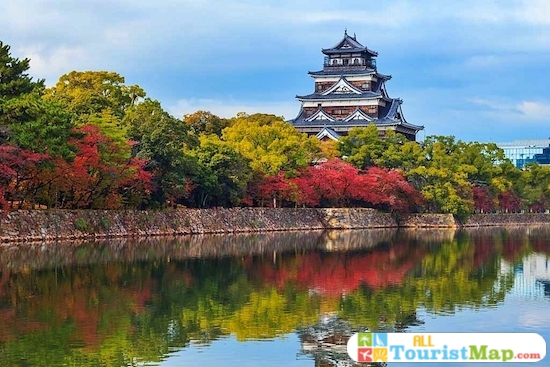 This city draws attention beyond its monuments, which are there by the dozens. Tourism usually focuses on one thing, how a city devastated by the first atomic bomb dropped managed to rise up and achieve greatness. The symbols of this city are new monuments. The Parque Conmemorativo de Paz is one of the sites of interest, where you can appreciate the Dome of the Atomic Bomb, a structure that survived the impact, as well as a museum, the cenotaph among other memorials. In addition, the historical center of Hiroshima has beautiful corners like the castle known as “the tent”. Beautiful gardens and the popular aioi-dori street, have a wide range of bars, shops and places for leisure. From here you can also take a tour bus to the surrounding area with a lot of charming places to visit and photograph. 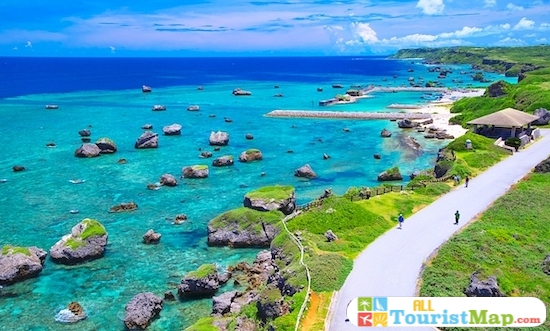 From Tokyo you can fly to this island that played a role in the Pacific War. It is a very interesting tourist spot since it preserves its own traditions and idioms. It has a very rich and unique history, but with an American touch due to the military presence in the area. It is also a small paradise in the best Hawaiian style, with beautiful beaches and an excellent climate. Worthy of admiration for its economy and endogenous culture, it has much to offer in terms of gastronomy and art. Its architecture is new, rescuing the Japanese identity with Chinese touches, among the most relevant influences. In addition its corners associated with the battle of Okinawa are very well interpreted by the tourist guide programs. 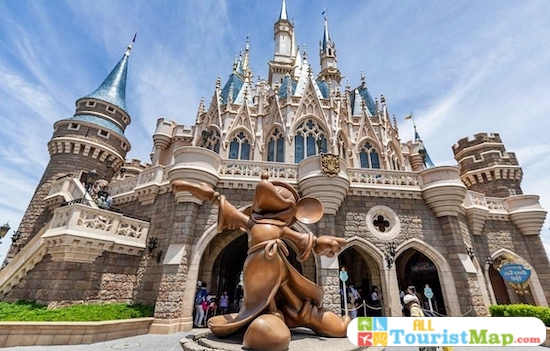 Disney does it again with this fantastic world outside of Tokyo. Just imagine the Japanese efficiency with the best of the attractions of this compound. Together with Tokyo DisneySea has accumulated more than 700 million visitors since its creation. It’s as if this is just the main reason to travel to Japan; maybe we’re not so wrong about that. In the best style of California’s Dysneyland, but with its unique touch, it has had such a high acceptance that it has become the second Magic Kingdom amusement park in the world. What is most striking here is that its main attractions acquire an extra colorfulness when they are coupled to certain seasons of the year such as Halloween or Christmas. The parades performed by your favorite characters are very entertaining, not to mention the atmosphere recreated by their hotels. 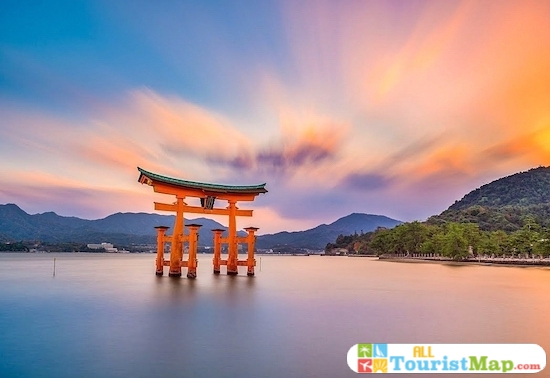 On your way through Hiroshima, you can take a ferry at Miyajimaguchi to Itsikushima Island. Better known as Miyajima, it’s a UNESCO World Heritage Site. Its shrine was built at the foot of the sea. Today its torii, is the only thing that maintains this position because of the withdrawal of the waters with time. As a result of a series of reconstructions over time, the main temples date back to the 13th century, although their foundation is presumed to have been in the 16th century according to as yet unconfirmed records. It is dedicated to the deity of the sea, and is one of the most important Shinto shrines in Japan. This island is a real delight, not only for its temple, but for its fauna and reliefs, which you can add to a complete tour. 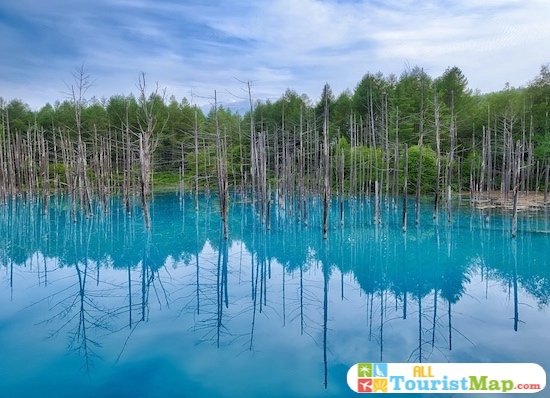 Bei is a mountainous area, very famous for having one of the rarest lake phenomena. But this is no mere coincidence of nature. It is a measure taken by the city to minimize the damage to the town in case of erosion caused by volcanic activity. The point is that the landscape generated by this pond has a range of colors that turns into different shades, depending on the season of the year. It is an image that captured with professional photography passes as a professional editing work. You just have to go and look at it with your own eyes, as thousands of tourists do. Through tourist routes you will be able to witness these colors that seem out of our visual reach. Of course they are part of a tour along with other places of interest.

Map of hotels in Japan

In terms of accommodation you will have several options, from elegant western-style hotels to “Ryokan” inns. You can also opt for Minshuku, where for a low price and adapting to their standards you can have a comfortable stay. The point is to compare and choose the best; price and location is an important factor when planning your trip to this island. We show you the options in our map of hotels in Japan. Explore well and remember to filter your search based on our advice. In Tokyo, as it is a tourist epicenter, you will be able to mark most of the routes through the country, and we thought it would be good to establish our recommendation. The peninsula Tokyo is a hotel that by its design and excellent services worthy of a 5 star hotel, will give you a comfortable stay in the heart of the capital.

Video of the most impressive places in Japan