The area of the current kingdom of Belgium has been a tourist spot since the 18th century. The old spas of that time received a distinguished clientele that included the European aristocracy, as well as wealthy merchants and high officials. The second European casino operated in Spa, a city in eastern Belgium. Until the first beauty contest in the world was held in this city in 1888. The city of Bruges was visited by hundreds of European tourists during the 19th century, who sought to tour the historical quarters of this exuberant city. It is clear, then, that Belgium has a long tradition of tourism, which has allowed it to make this activity a culture of service and attention.

Belgium’s greatest tourist attraction is its wide cultural diversity, which is masterfully expressed in its motto “unity is strength”. In fact, Belgium is home to three different cultural currents more or less divided into three regions, each of which speaks a different language: Dutch, which is spoken in Flanders and is the main language used by most people; French in the Walloon region; and, to a lesser extent, German. Flanders is home to 57.8% of the Belgian population and is home to the country’s most famous cities: Antwerp, Ghent and Bruges. Wallonia has a much less dense population and the most important cities are Charleroi, Liège, Namur and Mons. Finally, Brussels – the capital – has 1.8 million inhabitants, making it the largest conurbation in the country, including a large number of people of non-European origin. The 30,528 km² of Belgian territory is located in the north of the centre of the European continent, surrounded by France, Germany, Luxembourg and the Netherlands. In addition, a section of its border borders the North Sea. Celtic, Gallic and Germanic tribes populated this beautiful area. The first Belgians came from these peoples. The latter were dominated by the Romans, who were amazed at the courage and bravery of the Belgians. All these cultures left invaluable traces of their passage through the place. 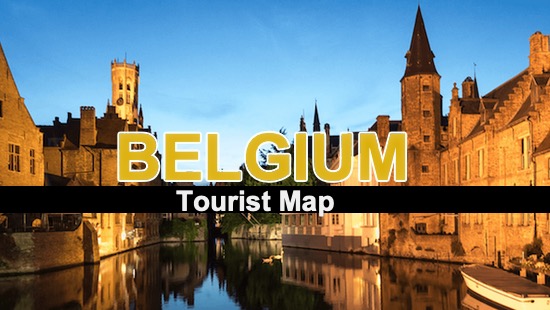 One thing that Belgium loves is its green and luminous landscapes. One fifth of the territory is covered with dense forests. There are also agricultural and industrial areas and, of course, extensive coastlines bordering the North Sea for about 72.3 kilometres. It is precisely this beach area that corresponds to the lowlands of the region. In contrast, the landscape is more abrupt towards the south, where there are forested plateaus and hills, full of firs and pines, in the Ardennes region. In these areas there are rivers that have had a deep impact on the territory. In addition, the density of the trees gives it an appearance similar to that of the Black Forest, obscured by the large number of trees.

Belgium’s climate is classified as temperate maritime. This means that the seasonal temperatures are not extreme, i.e. in summer there is an average of 17°C and in winter it barely drops to 3°C. Of course, there are regional differences, towards the coast the temperatures are more benevolent than in the mountainous area. It is important to take these data into account as they help to choose the best time to travel, take the necessary precautions and thus improve the experience. Another interesting detail is that in Belgium it rains regularly throughout the year so it is important to take appropriate clothing for the constant rainfall. For this reason, the best time to travel to Belgium is during the months corresponding to spring and summer.

Most visited places in Belgium

Brussels is the capital and political centre of Belgium. One of its characteristics is its multiculturalism, since almost two million people live there, many of them coming from countries all over the world. Since Brussels was just a swamp in the Middle Ages, it has evolved and grown, both in population and in size, into what it is today: a city where the past and the present come together, full of historical monuments, impressive museums and more modern architecture. In addition, there are shops, restaurants and bars that are interesting to visit.

This ancient city is one of the crown jewels of Flanders. And it is, not only because of its beauty, but also because it is known as the city of diamonds. Millions of dollars in diamonds are exchanged there every year, both in cut and in trade, and from Antwerp these precious stones are shipped all over the world. It is advisable to visit the house of the city’s favorite artist: the Renaissance Peter Paul Rubens in Antwerp, as well as the museums where his beautiful works are exhibited. Furthermore, Antwerp has an old port, witness of the past glories, when the city was an international commercial center of Europe.

The Middle Ages saw Ghent blossom and the traces of this historical period can be seen throughout the city. For example, the castle of the Counts of Flanders or Gravensteen is a fortress that represents the political and military power of the city. Also the bridges Sint Michielsbrug, Graslei and Korenlei. From the Middle Ages also comes the Korenmarkt or grain market, which gets its name from the large grain trade that developed in the city. Also the cathedral of St. Bavon, the Bell Tower and the beautiful Church of St. Nicholas. Despite its medieval air, the spirit of Ghent is cheerful, young and modern.

Bruges is an obligatory stop on a romantic journey through Europe. Not only because of its medieval atmosphere, but also because it has an artificial lake about 800 years old made for more utilitarian purposes but now known as Minnewater or Lake of Love. But Bruges is also a commercial square that prides itself on being the cradle of the world’s stock exchanges, as witnessed by the old trading houses that can be found in the City of Bruges. Moreover, one of the oldest museums in Belgium is located in Bruges: the Gröningemuseum with real jewels of Flemish art.