Ghent is, perhaps, the city in Belgium that is full of youth and joy. Most of its population is student, which gives the city, the third largest between Brussels and Bruges, a particular charm. Ghent is the capital of West Flanders and is the place where the rivers Lys and Scheldt meet and it is from there that it takes its name, of Celtic origin, to highlight this convergence. In this tourist map you can learn about a city that has the largest number of historical buildings in Europe and whose history began with the Celts and had its peak in the fourteenth century, when it rose as the largest medieval city after Paris in France.

The tourist city of Ghent is a monument from beginning to end. To be there is to vibrate with the harmony of the medieval architectural beauty, with the intense cultural and night life of its inhabitants and with the history, since it was the city in which the famous Dukes of Flanders lived. Ghent is the third city of Belgium in population density, its territory includes about 157 square kilometers in which medieval buildings, a large number of museums, places to travel by bike and enjoy a range of concerts at night, mostly free, offered both in outdoor places and bars. 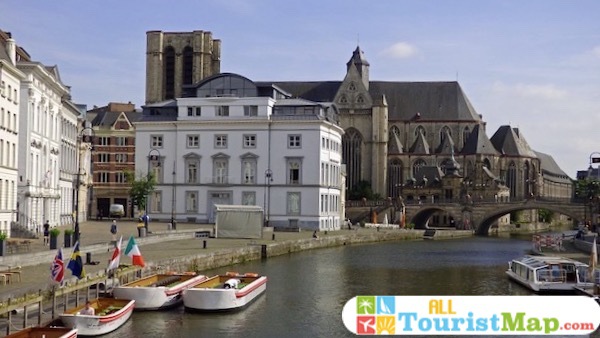 Ghent has countless tourist attractions, from historical to natural, with invaluable historical value. In addition to its architectural heritage, it is a reference point for Belgium’s economy, as boats can reach the port from the sea via the Terneuzen canal, an essential commercial activity for the country. Getting there is easy, as it is strategically half an hour away from both Brussels and Bruges. It can be reached by train, but it is best to do so by car as it has a very good road network, especially motorways leading into the city. Its climate is changeable, the winters are very cold and the temperature can go down to zero degrees. In summer time the temperature oscillates between 20 and 25 degrees, and it is similar in spring. It is not surprising that it rains frequently and that the weather alternates between cloudy and rainy all year round. The hottest months are usually July and August.

The beginning of Ghent as a city is marked by the construction of the walls ordered by King Baldwin I of Flanders in the 9th century, to protect two abbeys from Viking incursions. This is, more than anything, a student city, since about forty percent of the population is a student. It is a well signposted city with an impeccable medieval historic centre, it has many bridges and canals although in a smaller proportion than Bruges and since the eighties of the twentieth century it was the scene of a restoration that optimised it in terms of tourism and made it a favourite destination for travellers looking for interesting places to visit in Europe. It stands out for its cleanliness, signposting, order and the range of places of interest, which range from castles, museums and natural sites. There are ways to tour it and travelers prefer to take tours that showcase the most outstanding sites at low cost.

What to visit in Ghent 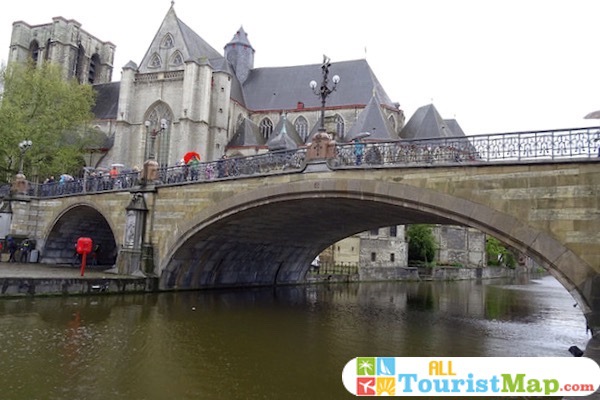 Sint Michielsbrug or St. Michael’s Bridge is the first compulsory visit on a tour of Ghent as it is there that the soul of the city is concentrated. This site offers one of the most beautiful postcards of the Belgian city, and of the whole European continent. It was named after the church that is named in the same way. This bridge offers a view of the three towers of Ghent, as well as the Korenlej and Granslej bridges. Around it, the daily life of the visitors themselves and the main promenades take place, and it also offers a view of the trams that run through the city. 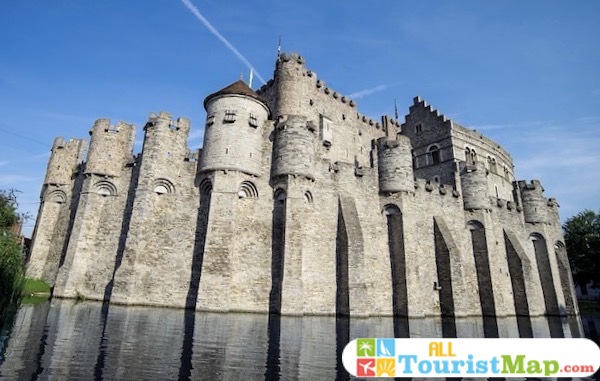 Gravensteen or the Castle of the Counts of Flanders is the most important medieval building in Ghent and is the place where political and economic power was concentrated in the city and in Flanders in general since the twelfth century. More than a castle, this is a medieval fortress that, because it was built around the river Lys, was difficult to conquer and hence part of its importance as a structure that provided protection to the royal family. Inside the castle there is a collection of weapons of war and instruments with which they tortured prisoners. The present castle was built in 1180 by Count Philippe d’Alsace. He was inspired by the crusader castles that Philip of Alsace found while participating in the second crusade.

Ports of Graslei and Korenlei 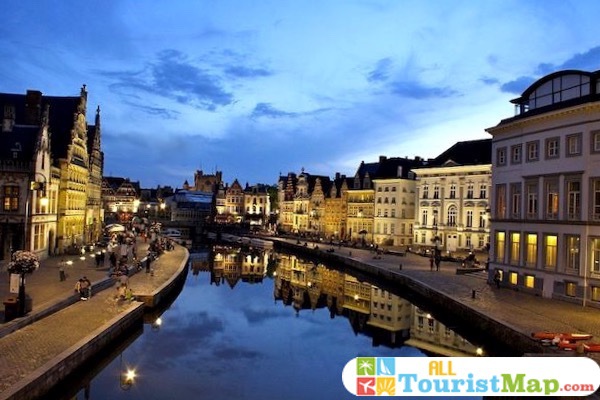 The ports of Graslei and Korenlei were important for the economic development of Ghent in medieval times. The area of Graslei and Korenlei is possibly the most beautiful place in the city, and if you ask a local, they would say the country. Today you can go on a tour in them on beautiful boats that take about fifty minutes and where you can learn about the role they played in the city, as well as going along the river Lys. Despite the fact that the rain in Ghent is unpredictable, umbrellas, parasols or blankets are available on the boats to protect you and not to miss out on an interesting excursion. 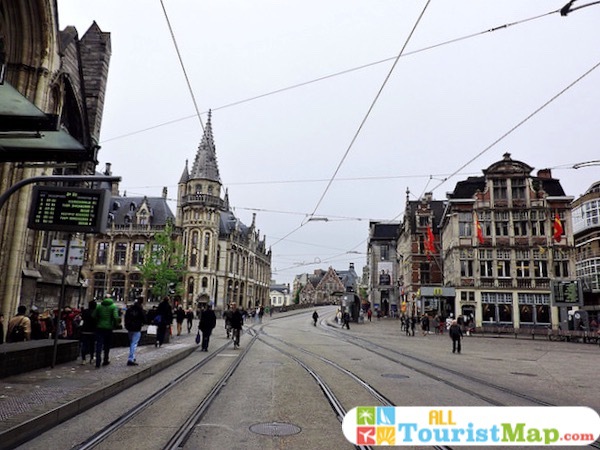 The Korenmarkt or grain market in the most exact translation, is the biggest square and the place where the most beautiful terraces are concentrated to enjoy a drink or a peaceful meal. Its name is derived from the grain trade that dates back to the 10th and 11th century when Ghent was the centre of the grain trade in the county of Flanders. The Korenmarkt is located between the river Leie and the church of St. Nicholas. As an urban structure it is one of the most beautiful in Belgium, located behind the port of Graslei. A large part of the economic and social life of the city takes place there. The variety of places, both terraces and bars that there are in this place gives to taste the best of the Flemish kitchen, in all the budgets and in all the epochs of the year.

St. Bavo’s Cathedral is one of the architectural treasures of Ghent. Built in the Baroque, Gothic and Romanesque styles, it is important for the city because in 1500 it was the place where the future king Charles V was baptized, son of the monarch Philip the Beautiful and his wife Juana La Loca, who gave birth to him in the bath of a palace, during a festivity. Inside this cathedral there are impressive works of art, such as the Adoration of the Mystical Lamb, by the brothers Hubert and Jan Van Eyck. The majesty of this church is due to the fact that Ghent, in the Middle Ages, was a rich and powerful city, which could afford to build bigger and richer churches. 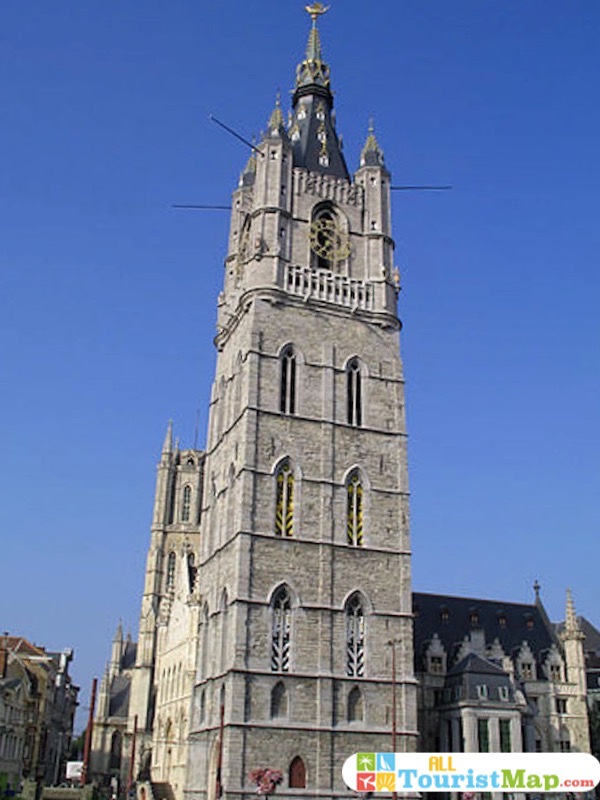 Belfort or La Torre del Campanario is a building that dates back to 1313. It is the symbol of the autonomy of the city and the enormous power of the medieval groups. Upon entering this building, visitors can appreciate an exhibition of bells, among which is the famous Roland bell, known for having a mythical dragon painted in gold. In Belfort there is a museum where a variety of dragons are on display. When climbing to the top of the Tower, visitors can enjoy the most beautiful views of Ghent. On 1 December 1999, the World Heritage Committee of UNESCO declared the 24 Flemish and 6 Walloon bell towers as World Heritage of Humanity because of their political and spiritual importance in the urban architecture of Ghent.

The Church of San Nicolás is a religious building built in the 13th century. It was founded on the ashes of an older church that burned down in 1176. Its style is Gothic-Scaldian and it has an exterior façade in vertical order with large buttresses flanked by towers. This church was destroyed during the occupation in the French Revolution. The soldiers used it to place their horses. However, the authorities began a process of reconstruction which, although it has been extensive as it has lasted until the present day, makes it one of the most beautiful monuments in the town. 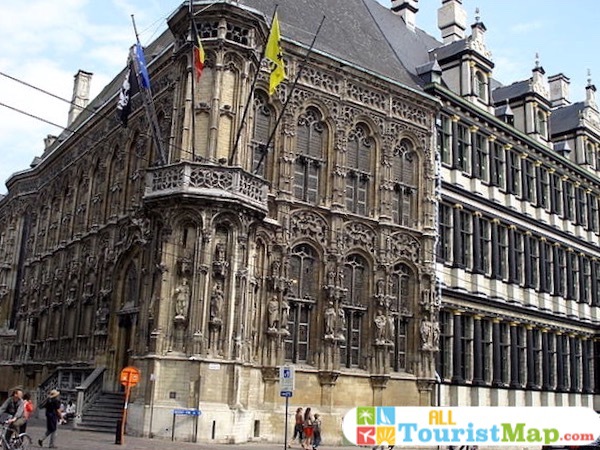 The Ghent Town Hall is one of the most luxurious buildings in Ghent and stands out because of the variety of architectural styles that converge here. First of all there is the late Flamboyant Gothic style, built between 1519 and 1539, which is displayed on the facades in Hoogpoort Street. On the Gothic side of the town hall are the 19 statues of the Counts of Flanders. Then you can appreciate the Renaissance style with which the Botermarkt was designed, around 1595 and 1618. Inside the town hall highlights the Hall of the Arsenal and its splendid wooden vault, plus a wedding chapel in the illuminated by six stained glass windows representing the Counts of Flanders. 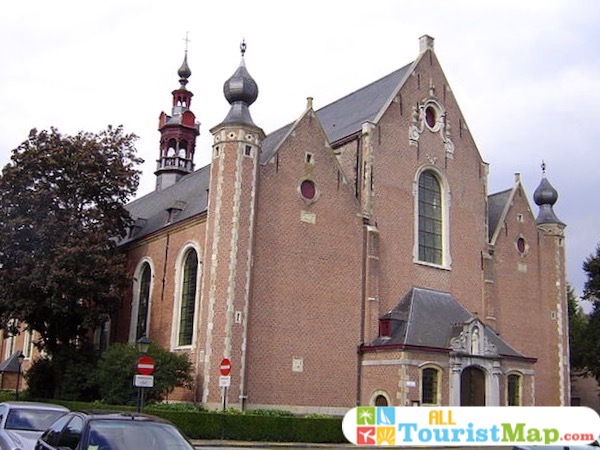 In Ghent there are about three beatheries. These were places that were built and proliferated in the Middle Ages during the time of the Crusades in which women, called Beaths or Beguines, went there voluntarily when their husbands or fiancés went to the front in battle. They were places where silence and cleanliness were kept and women dedicated themselves to the service of God, although they were not governed by the Catholic Church. One of the main ones in Ghent is the Old Beatrix of St. Elizabeth, which was replaced by the Sint Amandsberg in the eighteenth century and from this you can still visit its structure. However, the largest is the Grand Beaterium of St. Elizabeth, built between 1873-1874. This Beaterium, together with the one of Our Lady of Ter Hoyen also in Ghent, is a UNESCO World Heritage Site. The main attraction of these buildings is that they are quiet, full of peace and with an organized and green nature around. 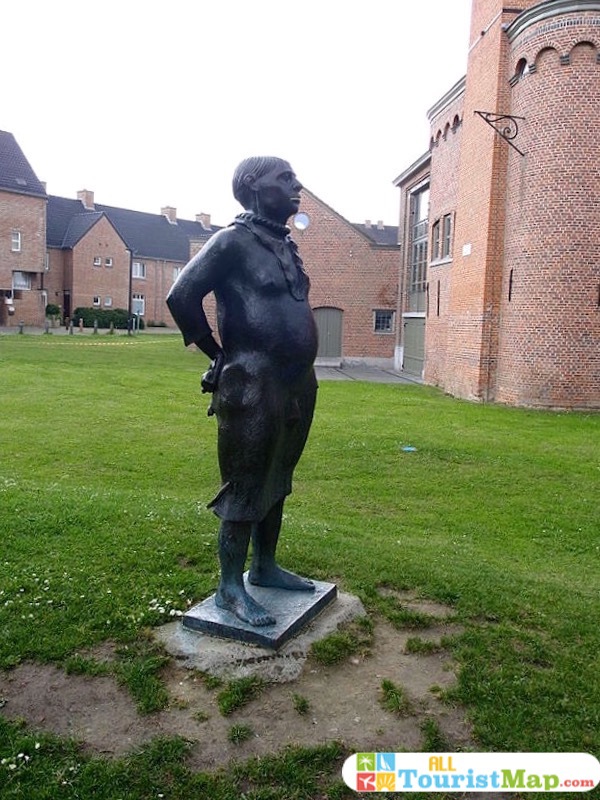 The Stroppendragers is the statue of the peasant man with the rope around his neck, symbolizing the citizens who rose up against King Charles V and refused to pay taxes. They were forced by the king to walk towards his castle, with the rope around their necks as a warning that they could be hanged if the revolts against them continued. Local people point out that this monument shows the character of the Ghent people, defiant and rebellious, and therefore this statue, which looks towards the place where the monarch was born, symbolises the people of the city.

Map of hotels in Ghent

Ghent is a city where tourists generally visit for a couple of days, so accommodation is simple and the variety of hotels does not exceed sixty, although there are also inns and guesthouses that can be cheaper than the average of one hundred dollars per room per night, which is the cheapest rate you can find in hotels. The city can be reached by train from Brussels and Bruges, for an average journey of half an hour, so it is also possible to stay in these two main cities and reach Ghent as a secondary destination for a couple of days. However, if the decision is to sleep in this beautiful location, there are a total of six five-star hotels and some 133 hotels that reach three stars and offer lower prices.  The options that are best known by users are the Cathedral Hotel, which is centrally located and users highlight the fact that it has spacious rooms in which care is taken to ensure cleanliness.

Video of the most impressive tourist sites in Ghent