Be the protagonist of the movement that characterizes the second most important city in Scotland. Glasgow contrasts with its capital in terms of size but has won the hearts of its visitors. This city has recently marked a rapid growth within the United Kingdom placing it in the top 5 of the most important. Culturally, Glasgow concentrates an important number of galleries, museums and places where artistic expression fills the streets and stages with life, on a par with the architectural facades that adorn its spaces. It is because of them that within so many attractions it is complemented with an excellent variety of restaurants and cafes, and places for the nightlife. These places have become the favourites of tourists from the rest of the United Kingdom and Europe. Continue with this tourist map of Glasgow to discover these characteristic places of the tourist Scotland.

Glasgow currently ranks as the third most populated city in the UK, competing in size with a city like London. Such a status has been the product of dramatic events that have brought about major changes in the growth and establishment of political and economic power in the region. Its importance lies in the high population density, derived from a bulk of 2,500,000 inhabitants grouped both in the center and throughout the metropolitan area, this being only 151 thousand square kilometers. Many are the settlements of diverse cultures that have passed through these lands; this way all that memory at sight is reduced by Victorian constructions that predominate the urbanistic complex, but that conserves in their universities, and as complement of their culture, the Rugby is usually one of the most attractive spectacles of the city. 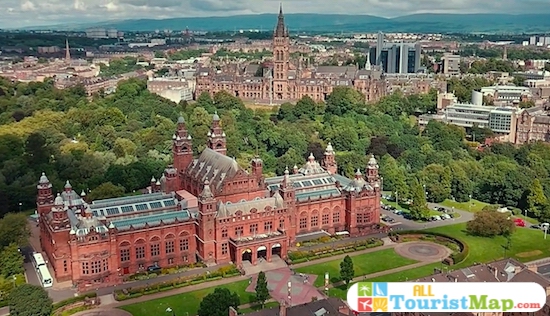 The ideal time to visit Glasgow is in the summer, between June and August, although this is the time that thousands of people usually go, even so many choose to use the autumn season to visit, as the winter is usually a bit disturbing for some who are not used to the cold. Places to visit in Glasgow are many, and you can make tours by tour bus, by bike or by renting a car. As you like, keep in mind that a good tour starts and ends with its most important places like Kelvingrove Art Gallery or Pollok House. If you are a lover of Gothic art do not forget to visit the Necropolis, or admire the structure influenced by this trend with the cathedral of Glasgow.

With our tourist guide you will be able to have as a filter the favorite places to do a complete tour inside the city. Taking as a base the tourist sites preferred by those who visit it, we give you all the information you need so that you can place among your plans, if your purpose is to come with someone, what is necessary to combine between what you choose to visit, such as their access points. Generally their sites speak for themselves and the experience is what sets the tone. So we invite you to follow this tourist route that will take you to know one of the most beautiful cities in the United Kingdom.

What to see in Glasgow 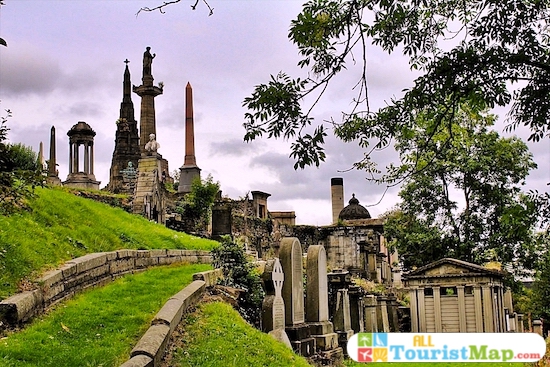 The Necropolis is located near Glasgow Cathedral. It is a Victorian era cemetery with Gothic style gardens. It extends over more than 150 thousand square meters. Its attraction is not only based on the precious memorial stones, but also by buildings and sculptures designed by native artists. Sculptures of weeping angels and large Celtic crosses blend here with the surroundings of the tree-shaded walkways, which open up to views of the cathedral and the city. The main entrance can be reached via the famous bridge of sighs in the Necropolis; it is part of the route of the funeral processions. An invaluable destination when visiting Glasgow given its supernatural charm. 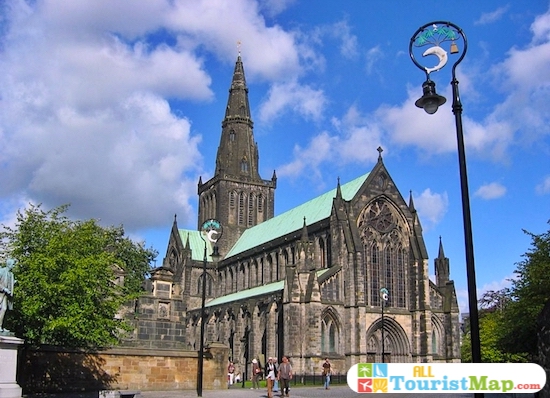 Glasgow’s most outstanding historical building is its cathedral. It dates from the 12th century and is called the Greater Glasgow Church; it is also known as St Mungo’s Cathedral. The history of this great temple is linked to the history of the city; it is rumoured to be located where Glasgow’s patron saint, St Mungo, built his temple. The most imposing room in the cathedral is the crypt that houses the mausoleum of St Mungo, the precursor of the religious order buried there in 602 BC. The shape of this building, its historical and mythical value makes it worth visiting when passing through Glasgow. Enthusiastic tourists will enjoy a free guided tour through the vaulted halls of the temple. The volunteers who work there teach visitors about the history and conception of the cathedral. 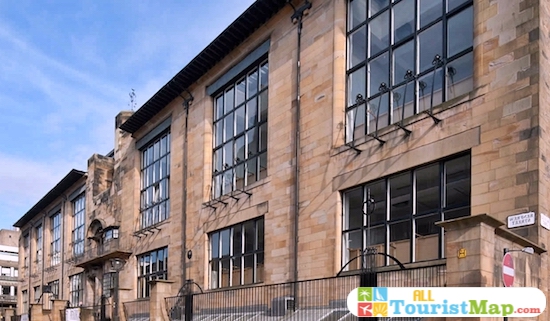 The Mackintosh Art Academy is an essential point to look at for lovers of fine architecture. The Art Nouveau building reaffirmed the prestige of the designer Charles Mackintosh (28 years old) not only as a master of exteriors but also as an interior designer. The façade is dominated by three 20-metre-high viewpoints and windows reminiscent of Scottish castles. The famous rooms, including the director’s chamber, the Mackintosh room where the academy activities take place, the library and the gallery are the only ones that are not open to the public due to the restorations, after the fire in 2.014. But, the guided tours by the students, explore the rest of the attractions of the school. This art school is located in several buildings throughout the city of Glasgow. 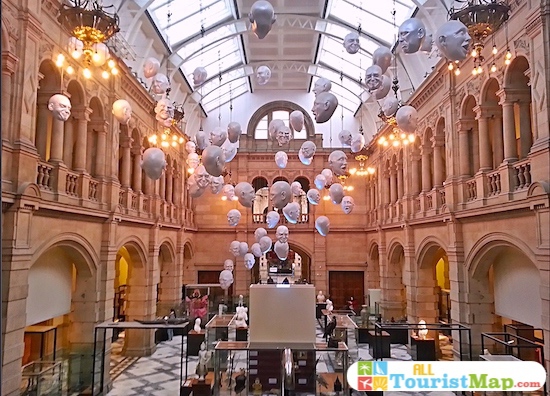 More than 2.5 kilometres long, Sauchiehall Street offers the largest variety of shops in the city. This street ends at the western end of the metropolis, in an area of cafes, restaurants, shops and luxury hotels. Perhaps the highlight of this street is the wonderful Kelvingrove Museum and Art Gallery. Opened in 1901, the museum contains a majestic collection of British and continental paintings, from a portrait of Van Gogh to the Christ of St. John of the Cross by the great Salvador Dali. Exceptional galleries and fully furnished rooms, ceramics, silverware, furniture, and other works of art. Also on display are armor and weapons such as swords, shields, crossbows, helmets dating from the 15th and 16th centuries, as well as tools from the bronze age. A must-see site for visitors with a passion for culture. 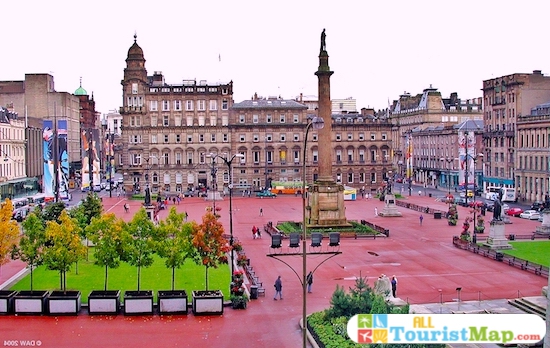 In the centre of the city of Glasgow is George Square, a recommended place to start your tour of the city, given its location and beauty. It is decorated with flowers and with iconic statues of important people linked to Glasgow, such as Queen Victoria. In the east of the square, is located the City Hall and its impressive tower of 70 meters, completed in 1890. Also jumps to the eye from the beautiful square, the House of Merchants which is the headquarters of the oldest Chamber of Commerce in the United Kingdom, founded in 1605. Next to Centro Italiano, they offer a number of exclusive cafes, unique restaurants and designer boutiques. 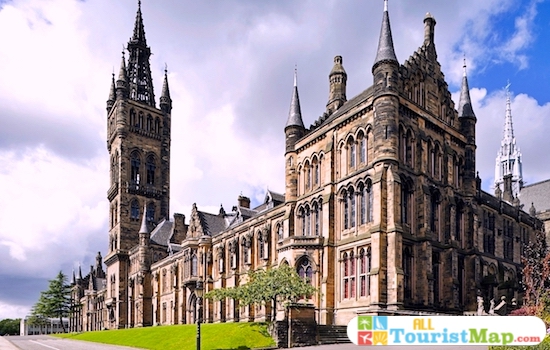 The University of Glasgow is located in the West End and has existed since 1451. This university has had illustrious speakers such as Adam Smith, James Watt and Joseph Lister, the father of antiseptic surgery. There is an interesting permanent exhibition at the university’s Visitors’ Centre, which shows in detail the most remarkable findings of the men of science who taught here. In the museum of this academy, the collections of the departments of ethnography, zoology, geology and archaeology are displayed, including many captivating discoveries of Roman locations. In the art gallery, works by Rubens, Rembrandt and Reynolds are displayed. A visit to Glasgow University is a journey into the past because of its architectural style, and with its large gardens and wide hallways, it is compared to Hogwarts College. 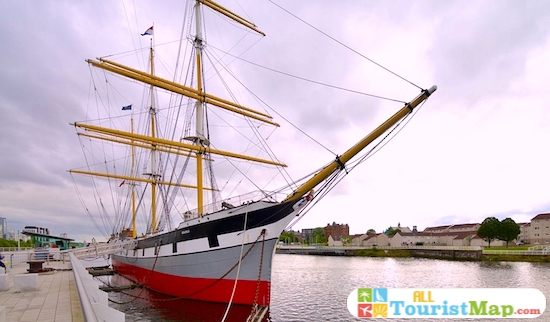 Tall Ship is an independent museum with the aim of preserving and interpreting the Glenlee (ship) and the local maritime history for the benefit of locals, visitors and tourists in Glasgow. After her rehabilitation, the Glenlee of the few remaining Clydebuilt ships is still operating in the balloon. The tour of this museum takes you back in time to experience what life used to be like overseas. The museum is the ship itself, and you can access the galley, the cargo hold, the captain’s cabin and even take the helm. The Tall Ship offers maritime-themed events and activities, lectures and guided tours, for tourists and students. 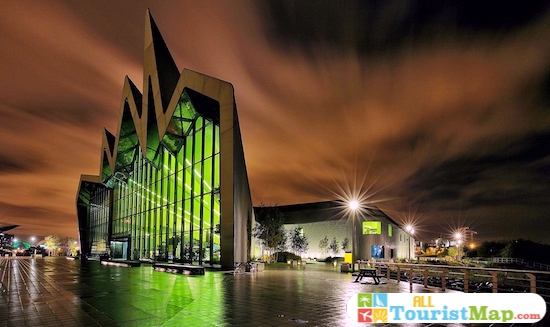 The Glasgow Transport Museum was first established in a train station in Pollokshield. It was then relocated to the city’s Kevin Hall and finally moved to the new Riverside building in Glasgow Harbour in 2011. The building was designed by architect Zaha Hadid and specially built to house the transport museum. The Riverside Museum is home to some of the best cars and bicycles in the world. In 2013 it won the award for Best European Museum of the Year. Visiting Riverside brings with it a great day of learning and entertainment given its more than 3,000 exhibited artefacts from Glasgow’s rich past. You’ll find a variety of items such as skateboards, powerful locomotives, antique cars and more. 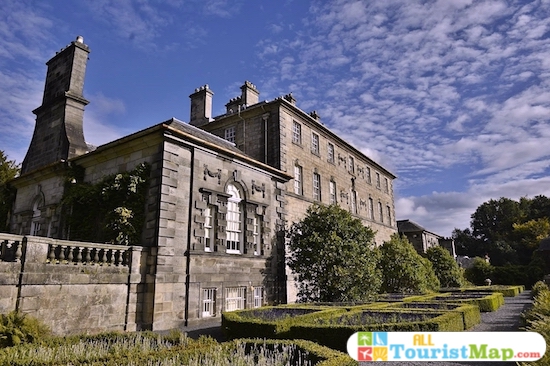 Six and a half kilometres southwest of Glasgow city centre is the Pollok House. Its grounds extend over about 144 hectares. As the home of the Maxwell family, this mansion was built in 1752 by William Adam and his sons. Most of the building’s spaces, halls and rooms are open to the general public, from the Great Hall to the servants’ quarters. Inside the mansion you can see the collection of Spanish paintings by Sir William Stirling Maxwell by El Greco, Goya, Murillo and Velasquez, as well as several renowned works by William Blake. The more intrepid visitors will want to try the fully interactive exhibition called Escape to the Past; it consists of solving riddles with the aim of returning to the present. 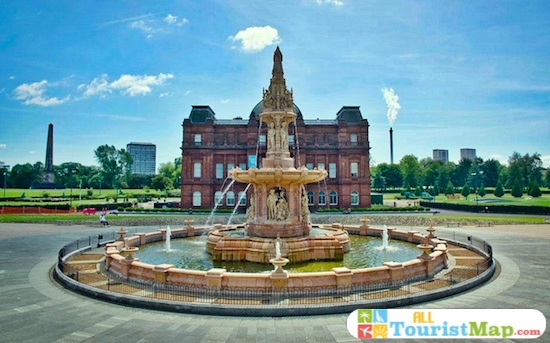 Opened in 1662, Glasgow Green is arguably the city’s most primitive park. It is located a few meters from its center. One of its main attractions is the People’s Place, a museum built in 1898 that tells the history of Glasgow from the mid-eighteenth century to the twentieth century. Among the exhibits, there is a replica of the Single End house from the 1930s, and an exhibition with the aim of remembering the ballroom in the Glasgow Barrowlands. Another great attraction worth visiting in the park is the Winter Garden, and a conservatory containing a huge variety of tropical and subtropical plants. Also worth a look is the beautiful Doulton Fountain; the largest terracotta water fountain in the world.

There are hotels everywhere, but Glasgow concentrates most of its offerings in the city centre. There you can find mid and high range hotels. Although more than one standard hotel is available if you are looking for a bit of economy. Glasgow hotel map helps to filter all the options we can think of, so that we can facilitate the whole process of coming to Glasgow. The Radison Blu Hotel is near the train station so it will be one of the best options; it is our recommendation to stay and have a great time with its elegant bedrooms and the good gastronomy that it has there.