The Andalusian Brittany is a reality in this piece of land, of tiny extension but of enormous emotion. It seems that there is not much to do in a place that has a rock and a little more than a hundred monkeys, but really that its historical center, neighborhoods, castles and museums form a tourist route of entrance that we detail in this tourist map of Gibraltar. What is most exciting is to arrive and feel in a mini kingdom, which even has its own currency, a tax-free trade and surprises inside “literally”. This ticket will give you the reasons that many tourists have for spending more than an afternoon. The perfect excuse for a couple of days out is its excellent nightlife, natural attractions and excursions that are obviously not worth the haste.

This tourist site is compact, easy to visit but difficult to get away from every corner. The good thing is that, depending on the time of year you choose to visit, you will always have the warmth of its about 33 thousand inhabitants with their arms open. It is relatively small, typical of a British overseas territory. Its geostrategic location has allowed it to be steeped in various cultural influences throughout its turbulent history. From the Phoenicians to the Romans, then the Visigoths and the Vandals and then the Byzantines, not to mention the Moorish influence has given it an accumulation of elements that are intermingled in its 7 square kilometers. Currently this territory has been in dispute between the kingdoms of Spain and the United Kingdom for its sovereignty, since the important enclave it represents as the entrance to the Mediterranean through the strait of the same name. 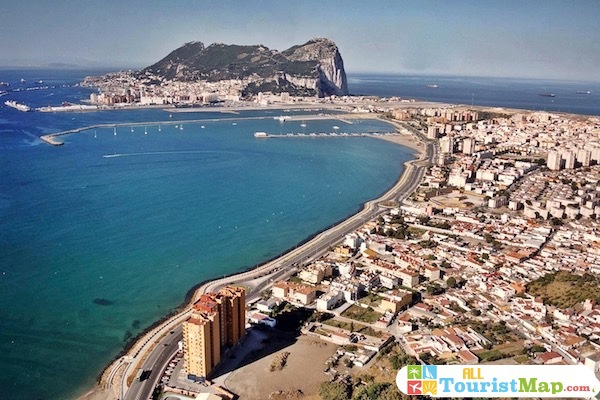 In the beginning the tourist adventure usually begins at its entrance, since its border with Spain through the crossing of the Line of Conception you must wait to enter on foot, although the airport is one of the options. Once inside the excitement begins with an initial tour of the Main Street having available the tourist buses that offer travel. With the help of a Gibraltar city map you can start the tour in Casemates Square, where you can coincide with the great festive and cultural offerings of this neuralgic point. The Rock of Gibraltar is ideal if you want to venture into the siege tunnels or St Michael’s Cave. Don’t miss the legendary Moorish Castle, however Gibraltar has a museum, gardens and a beautiful old town that you can combine with a good-natured commercial spirit.

Gibraltar’s rich history and nature means that you need excellent guidance on the most popular sites to get to know this tip of the peninsula from all sides. Gibraltar Tourist Guide is here to help you with all the information you need, in terms of the routes you should take, to get you through everything and leave nothing to be desired. Likewise we leave the hotel information, which like many tourists has been useful to break the routine of fleeting tourism, and have a great time both day and night given its excellent nightlife.

What to see in Gibraltar 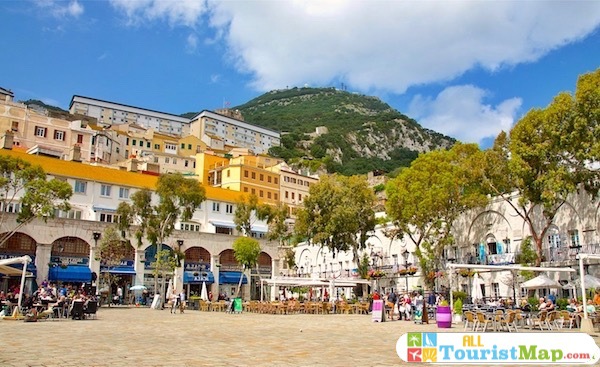 On the northern edge of the Main Street, Casemates Square is the largest common space in the old city centre and is a commonly used entry point for meetings, due to the varied number of dining rooms and cafes. Although it was inaugurated in the second decade of the 19th century, Moorish archaeological remains dating from the 10th century have been found. Although through many centuries it served as a merchandise center, many recreational and cultural activities take place here, including National Day celebrations, outdoor concerts and the famous Calentita Food Festival. Another site of interest in the extension of the main street is the Roman Catholic Cathedral of Santa Maria Coronada, in the Gothic style that used to be an ancient mosque. 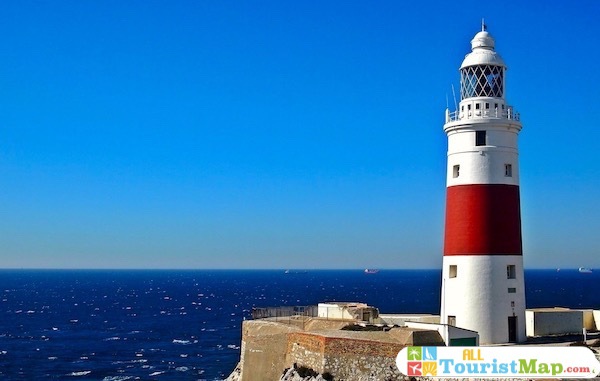 Europa Point is the southernmost tip of the Gibraltar region. This point is occupied by some buildings and a cricket pitch. There are 5 significant structures: the Europa Point Lighthouse, El Pozo de las Monjas, The Catholic Church of Our Lady of Europe and the Ibrahim-al-ibrahim Mosque. All of them contain a very rich historical value that form a great tour to do when visiting the city. At this geographical end, you can appreciate surprising views of the African continent through the Mediterranean Sea, as well as several Spanish cities on the sides of the coast. It’s an epic uphill walk to Europa Point from the city centre, so it’s best to take the number 2 bus, which leaves every 10 minutes.

the Rock of Gibraltar 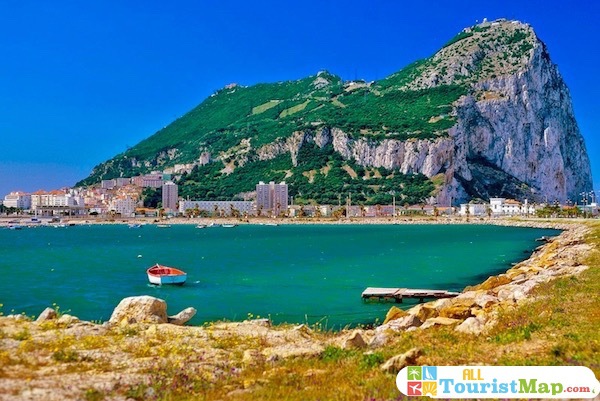 Using Gibraltar’s famous cable car, you can reach the top of the impressive rock massif in a matter of minutes. At an altitude of 412 metres, an incredible view awaits you, as well as the famous stump monkeys. Gibraltar is well known for its primates, the only apes that naturally live on the European continent. There is an old story that if primates ever disappear from Gibraltar, the British will have the same fate, but with over 200 animals living protected in the area, it is unlikely. The best place to see them is in the Gibraltar Nature Reserve at the top of the Rock. Although the monkeys are less than 1 metre long, you should be careful as these animals are wild. 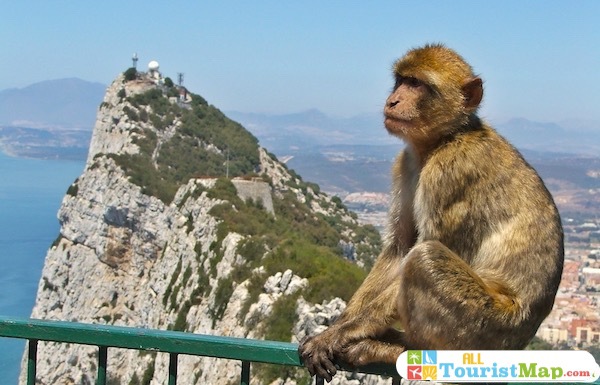 The Gibraltar Nature Reserve is an area that was formed for the protection of natural and historical sites and for the preservation of wildlife. It is home to the Forbes Quarry where significant archaeological finds have been made since the mid 9th century. It covers about 2.70 square kilometers of the territory. Its rock is home to a population of more than 250 stump monkeys, red foxes, mouse-eared bats, the funnel-web spider, 5 species of lizards and 6 species of snakes. The views from the top, to the north, are of Spain and to the south, of Africa, including the rugged silhouette of the Atlas Mountains. 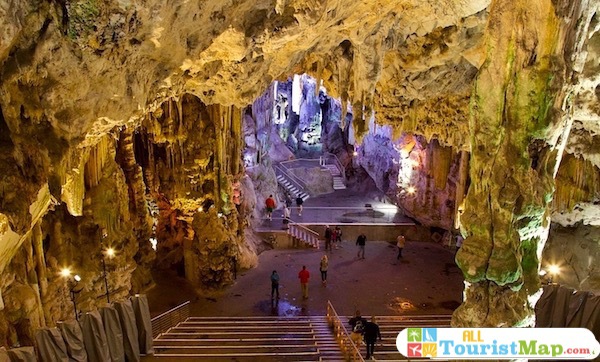 Gibraltar’s most spectacular geological attraction is St Michael’s Cave. This is a series of limestone chambers and tunnels so deep; it was once believed that they ran under the Strait to Africa. It consists of an upper section that is linked to a lower level of concavities by drops of up to 45 metres. Beneath it, the narrowest tunnels descend to a depth of 62 meters. These impressive underground chambers were used for defensive purposes by the Moors and the Spanish. They were later converted, although never used, as a hospital during the Second World War. Today, the Cave Cathedral houses a 600-seat auditorium. The caves also have impressive stalagmites and stalactites. 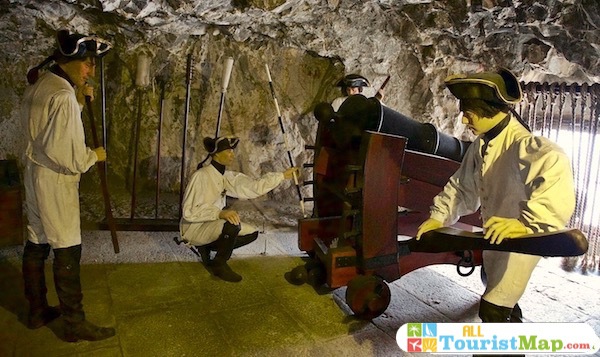 It is perhaps the most important military command in the Mediterranean. The siege tunnels of Gibraltar are a miracle of human ingenuity. Their construction began towards the end of the great siege by order of the then governor of the territory, General Eliot, who built them as a means of installing firearms in the inhospitable terrain of the Rock. In the many sieges that Gibraltar faced in its history, the Great Siege lasted more than a thousand days. The United Kingdom was the winner because of these tunnels, on which the key batteries for victory could be mounted. When walking through these underground passages it is interesting to realize that most of them were hammered out by hand for years. 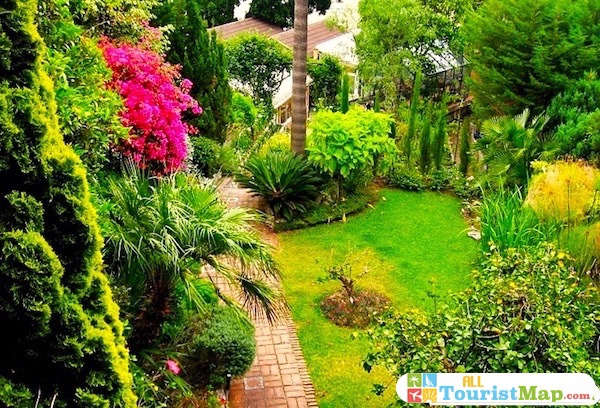 Just 30 metres from the Rock, is located the Botanical Gardens of Gibraltar, also called the Alameda Gardens; it is an urban oasis of 6 hectares of extension that serves as a tourist resort for the recreation of its visitors. Gardens in labyrinths, arches and stone stairs, steel gates, statues, are some of its attractions, without leaving aside the wonderful collection of subtropical plants among which are: palms, daisies, wild olive, pine, climbing plants and vines, and so on. A wide variety of bird and bat species use the garden to forage and breed. Tourists can then admire the wildlife developing in its natural state. The garden is available to the public and its doors are open from early morning. 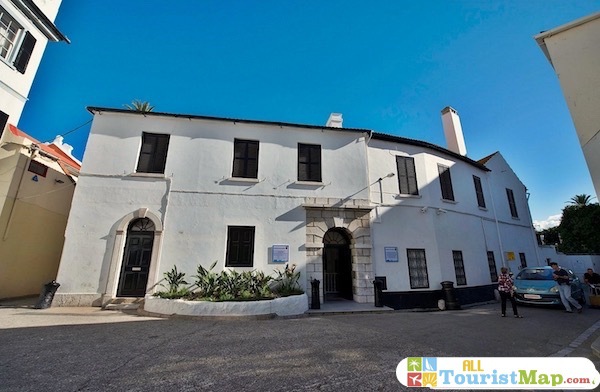 The Museum of Gibraltar is dedicated to the rich cultural, military and natural history of its territory. It is located in the eastern part of the city, and in its well-organised spaces, you can learn about the different peoples who have occupied the Rock. From the time of the Carthaginians to the present you will have a historical view that justifies its unique atmosphere. The highlights of this excellent museum are the well-preserved 14th century Arab baths; these are the best maintained in Europe. It also has a scale model of the mountain set in 1865. Various exhibitions cover the geological origins of the rock, from Jurassic times to the present day. The museum boasts a collection of Roman ironwork, and a detailed gallery on the 18th century Great Asylum of Gibraltar. 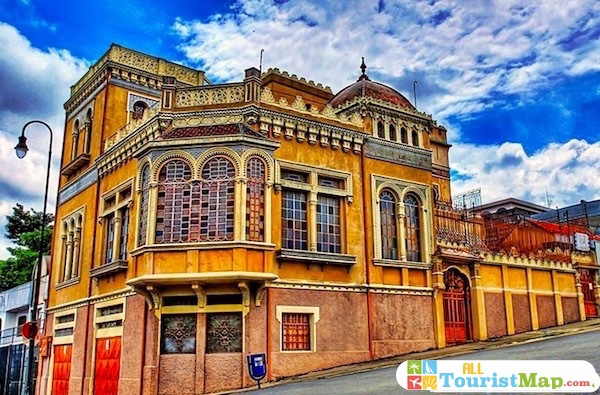 The old Moorish Castle is located in the historic centre of Gibraltar. It stands out in its elevated position, from where you can see Casemates Square. Originally built in the 8th century and rebuilt in the 14th century, part of the castle has been given up over time. Although the remaining parts, including a large entrance, some masonry elements and a tower, are the living narrative of its former glory. Its scarred and battered exterior speaks of the many battles this formidable structure has seen. The Homage Tower is, in fact, the tallest Islamic work still standing on the peninsula. Because of its location, it is one of the first things you notice when you cross the border into Gibraltar from Spain. 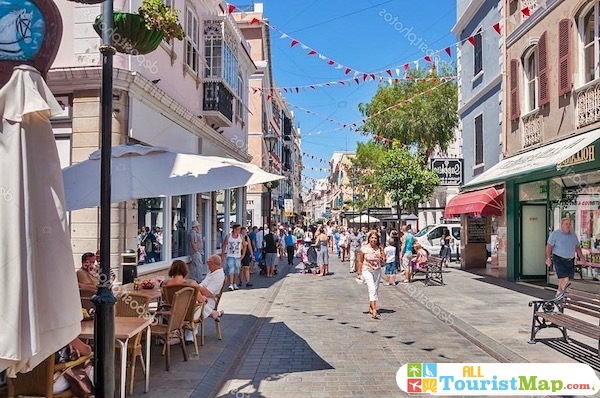 The original Irish residents were probably Irish women who came to Gibraltar in the mid 18th century. It is speculated, that they were sent to provide female company for the troops. The neighbourhood is now the location of a synagogue, a primitive meat establishment, old warehouses and a number of merchants, an example of which is the cafeteria in Sacarello. In the period when Gibraltar was Spanish, the main street of the Irish Mud was called Calle de Santa Ana. Many of the elegant buildings in the Irish Quarter that we see today date from the extensive reconstruction carried out in the early 19th century. Since then it has established itself as one of the most fashionable parts of Gibraltar. 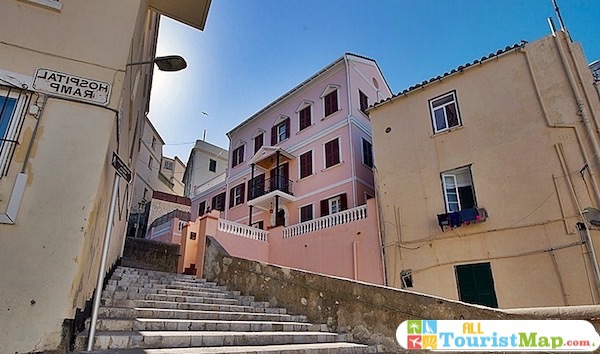 One of the most curious and even surreal parts of Gibraltar is its old town; it occupies the north-west corner of the territory and is only a 15 minute walk from the airport. A network of narrow streets that surround Main Street, is a portion of England under the sun. Top-notch shops like Debenhams and traditional British bars make you feel like you’re in the UK. But the unique blend of architecture and the pristine blue sky reminds you that you are in the Mediterranean. Casemates Square is the main outdoor space in the neighborhood; it has many sunny terraces for a splendid view accompanied by good food and drink. A charming area where you can find many places to go or to go out and snoop around.

Map of hotels in Gibraltar

If you are looking for an adventure that will take you into the night and enjoy an excellent peninsular sunrise, in our map of hotels Gibraltar we offer all the options. Whatever the location you are sure to find a hotel that will give you the wonderful views that this piece of land offers. Hotel O’Callaghan Eliott is our recommendation, as it is located in the most active urban area of the peninsula. Its proximity to the botanical gardens and the Moorish castle makes it attractive for those who want to have the best attractions at hand, just steps away from a cozy bedroom with balconies and excellent room services characteristic of this hotel.