One of the favourite places to visit in all of England is this city rich in history and university culture. Today we visit one of the most famous cities in Great Britain, where the centuries that preceded it seem suspended in time with their facades and the atmosphere that one breathes. There are those who use it as an escape after visiting London, but we assure you that a visit of two or three days will give you an even more positive perspective; with its pubs, campus and famous people you will witness all the magic and fantasy of “the city of dream needles”, discover the city complete with our tourist map of Oxford. Every part of this city is shaped by a rich cultural vibe, made up of poetry, science, music, literature and philosophy. More than just an intellectual holiday, Oxford promises so much more with its cuisine and leisure facilities, come and discover it.

The harmony reflected in its university structures reflects the beauty that has inspired many great men in history. Oxford is part of the county of Oxfordshire and home to one of the most important universities in the Anglo-Saxon world, in fact it is the oldest. It has its medieval origins in an ancient settlement that served as a border between the ancient kingdoms of Mercia and Wessex as an ox crossing. It was later established as one of the intellectual centres where formal education provided and promoted the generation of historical knowledge of Brittany. The university is the highest expression that resides in the heart of the city. Its main sites for sightseeing extend inside each of its buildings, with Christ Church College being the favorite of foreign visitors. 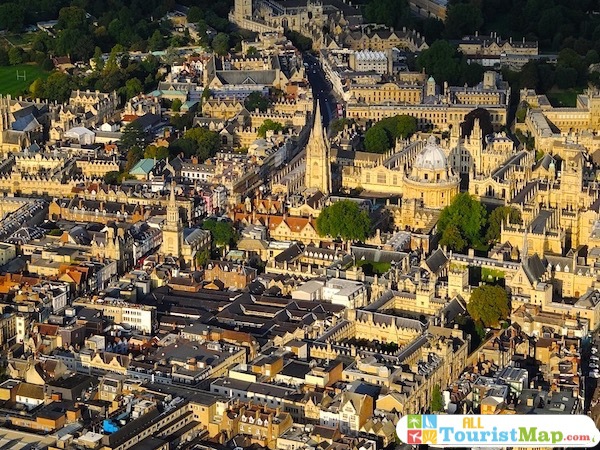 Certainly a visit to Oxford should not overlook its main colleges that serve as iconic student residences, there are also many places for street tourism, such as the Bridge of Sighs.  The castle of Oxford, attracts attention due to its condition despite restorations awaits you with interesting stories commented by its guides. A day trip is recommended to be seasoned by the museum variety as Ashmolean museum. And if you prefer to go beyond its center you can set aside a whole day to tour the entire Abingdon on the Thames where you can get lost in its streets and discover every corner that will arouse your curiosity. A tourist bus would be ideal, especially if you want to organize the tour with a group, but you are free to choose your own pace as this city allows you to travel at your own pace.

As we mentioned, the tour in this city can be invented if you wish. Oxford’s tourist guide is designed with super useful material that will help you filter and choose those places you can’t lose sight of. This city map shows you the easiest access and routes that connect each favourite tourist site and find you on your way to one or another place where you can refuel and refresh yourself so as not to lose energy and set a constant and exciting pace with all the beautiful and interesting things this beautiful city has to offer. Anyway, this filter has been as useful as the one provided by your Oxford tourist office where many tourists choose to plan an experience that provokes to repeat.

What to see in Oxford 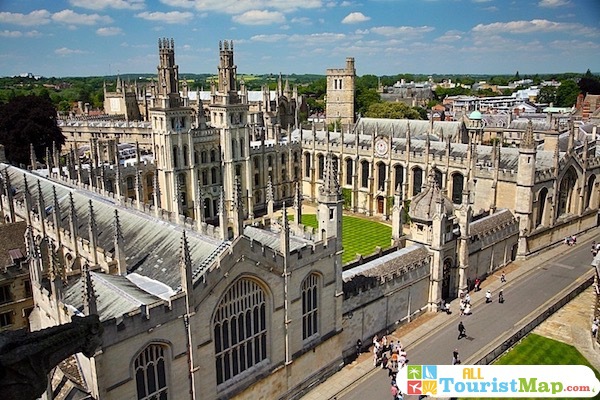 Oxford’s university campus is scattered among numerous buildings throughout the city. It consists of many different buildings, including academic departments, specialist faculties, large halls; spread throughout the town. Many buildings belonging to the college such as libraries, museums, gardens, among others, are always open to all visitors during the day, although it is advisable to take into account the different opening hours and group rules to make the most of your visit. The University of Oxford does not organise excursions, however, a number of independent operators offer walking tours of the city including guided tours of colleges and other university sites, covering topics from architecture, science to literature and art. 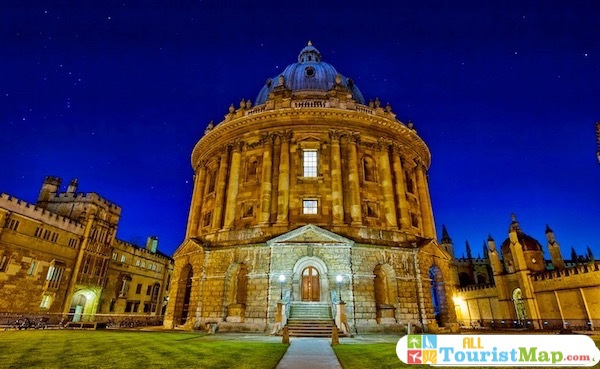 It’s a circular building located in the inner courtyard of the Bodleiana Library, originally built in the eighteenth century. It serves to house a scientific library and now serves as a reading room for university students. John Radcliffe, a doctor from Oxford Medical School, left a legacy after his death of 40 thousand pounds sterling for the construction of this phenomenal rotunda, which was named after him. A copy of every book published in Britain is kept there; it includes about 2 million volumes and about 40 thousand manuscripts. This beautiful building, one of the few in its form and use, is excellent for photography, and the surrounding area is just as lovely for capturing images. 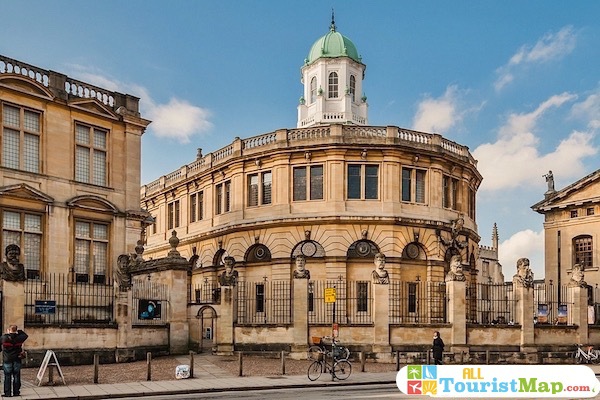 It is the first grade building in the center of the city, the official ceremonial hall of the university. Its construction was completed in the late sixth decade of the 17th century, according to the plans of the architect Christopher Wren and named after the project’s forerunner, Gilbert Sheldon, director of Oxford University at the time.  Although originally conceived as a theatre, the Sheldonian is still used today, mostly for lectures, musical concerts and university ceremonies; registration and awarding of degrees, and ironically not for dramatic performances. Every student on the faculty goes there at the beginning and end of their studies. Indeed, it is a building of great cultural and historical interest.

An old medieval fortress dating from the 11th century, which to a large extent still stands today. It traversed and survived countless warlike events throughout England’s history. Most of the castle was destroyed in the English Civil War in the 1800s and the remaining structure was later used as the local Oxford prison. The building has undergone extensive reconstruction and remodelling over time. It retains its archaic essence and is currently used as a tourist centre where shops and restaurants can be found. It also includes a themed hotel whose luxury rooms are prison cells, undoubtedly an interesting place to spend a night. Oxford Castle is easy to find as it is located in the centre of the city. 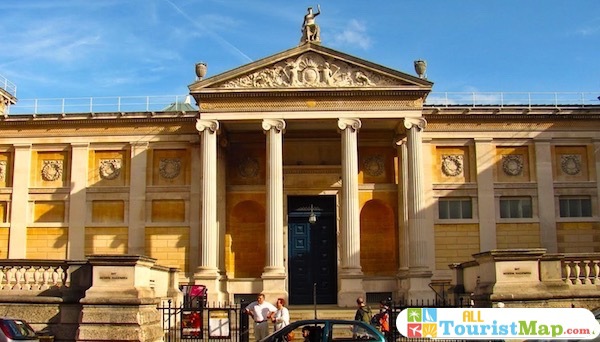 The Ashmolean Museum, opened in the late 17th century, is England’s oldest museum, the most notable of the city’s quartet of university museums. The building, with its neoclassical architecture, houses a wonderful exhibition of art and antiques. It also covers Greek sculpture, Middle Eastern art, Greco-Roman pottery, and a valuable exhibition of jewellery. The Ashmolean Gallery is extremely diverse, representing most of the world’s greatest civilizations. Its relics and objects date back to 500,000 BC. It also has the most important collection of Egyptian pre-dynastic ceramics and sculpture outside of Cairo, and the first collection of modern Chinese painting in the Western world. For visitors to the city of Oxford, this museum is located in the heart of the city and is free of charge. 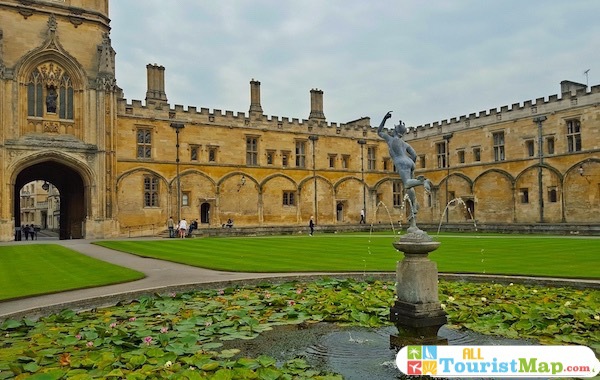 Christ Chruch College, or Christ’s House, is among the largest colleges in Oxford by size. It was created in the mid 16th century by the religious man Wolsey and refounded after its fall by King Henry VIII of England and Ireland. The main courtyard (Tom Quad), which includes a beautiful water fountain, is the largest in Oxford. The inner tower of the faculty leads to the foyer and the elegant dining room, scene of the Harry Potter movies; it is decorated by dozens of paintings by the most prominent members of the university, including Henry VIII and William Penn, founder of Pennsylvania. It is accessible by guided tour or free, admission prices vary depending on the month of the year.

Approximately 13 kilometres northwest of the city of Oxford is a site worth visiting. It is Blemheim Palace (at Woodstock). Home of the Dukes of Marlborough, the Spencer-Churchill family and birthplace of Winston Churchill himself. This majestic mansion was completed in 1724 by John Churchill, first Duke of Marlborough, with the financial support of Queen Anne, in gratitude for his victory against the French at the Battle of Blemhiem in 1704. This activity is currently commemorated on the roof of the Great Hall of the Palace. Besides touring the building, admiring its neoclassical architecture and feeling its historical connotation of relevance, you must also explore the adjacent rooms, gardens and main courtyard.

Abingdon on the Thames

On the banks of the River Thames, 10 kilometres south of Oxford, is the small town of Abingdon. There are a number of charming churches, houses and halls. The famous colonial hall, built in 1578, houses the Abingdon County Hall Museum. Worthy of mention is the splendid temple of St. Helena, with its imposing pointed tower, twin halls and laborious painted panel (from 1,390), as well as the Hospital of Christ, founded in 1,553. Some parts of the formerly influential St. Benedict’s Monastery can still be explored, including later modifications such as the Hall of Verifiers and the Great Gallery. An interesting time to visit Abingdon is in October, when the largest fair in Europe is held.

It was founded in the mid-15th century outside the city walls. Its charming “Torre Magdalena” was built in 1482, while the Torre Muniment is the entrance to the chapel where the famous university choir sings. There are apartment buildings with 1500s tapestry in the Founder’s Tower. Underneath, there is a passage that leads to the cloisters that contain grotesque figures called “hieroglyphics”. The Colegio Magdalena offers accommodation with breakfast in bed included when rooms are available. Beyond Magdalen College is a deer park named Grove and a bridge that leads over the Cherwell River to Water Walls. Opposite the college opening is the Oxford University Botanic Garden, founded in 1621 and one of the oldest in England.

There are good views throughout the city of Oxford, but the Bridge of Sighs, due to its characteristic design, makes it a worthwhile landmark. Although it is officially called Hertford Bridge, it is believed to bear the name “Bridge of Sighs” because of its similarity to a bridge of the same name in the town of Venice. It serves as a connection between the old and new Hertford College. Dozens of students have crossed it every day since it was founded in 1914 by the architect Thomas Graham Jackson. Today the structure is an ideal spot for photography. On the periphery of the bridge, you will find the University Church of the Holy Virgin Mary and the Sheldonian Theatre. 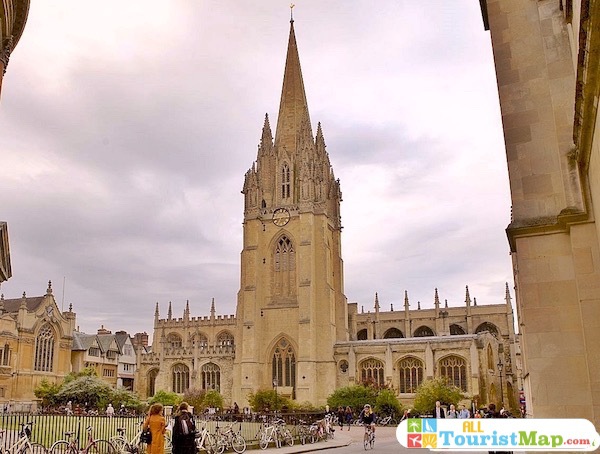 This church dates back to the 6th century and played an important role; it served as the cornerstone from which the city began to develop. St Mary’s University Church is the largest of the university churches in Oxford. It was here that the Trial of the Martyrs was held in 1555 and they were burned at the stake by heretics. From the outside you can see the ornate Baroque style pointed tower. Decorative gargoyles among other fearful statues adorn its facade. Similarly, the spectacular stained glass windows dating from 1400 must be inspected. One of the only two classic Metzler Orgelbau organs located inside the sanctuary. The temple is open every day from early morning until the evening for visitors after church services.

As a university town, its planning made its main sites a concentrate of beauty and charm in a small space. As a rule, those who visit it choose to stay in the city centre. Depending on the season, the availability of rooms must be consulted in advance. For this reason our map of hotels in Oxford reveals you which are the ideal places to rest, having as a starting point for a tour in each point of interest. Mercure Oxford Eastgate Hotel has the advantage of being close to the train station and the university campus. Its rooms have Wi-Fi service, television, minibar and coffee machine. Don’t miss the opportunity to vary your tastes with a touch of Italy in its curious restaurant.

Video of the most impressive tourist sites in Oxford