In this tourist map Sweden we invite you to catch all the splendor that emanates from this elegant city and striving for details. Famous among the Scandinavian nations for its greatness and its population density. It has managed to remain a peaceful country with a high quality of life. Sweden is a country of nuances in appearance and spirit. Here the new and the traditional have found a perfect balance, making it a famous style of dress and decoration. Immerse yourself in a world of fantastic monuments scattered throughout its major cities. Here the history and the way of life have been moulded among its natural landscapes. The winter activity in the winter season is a valuable attraction that you cannot miss. Its creative flavors with natural elements invite you to a journey of sensory stimuli.

When you travel to this country of Vikings you will find reasons to distinguish this culture from the rest of the European ones. Its collectivist spirit and high standard of living means that the bulk of its population is concentrated in its important cities. Part of its attraction is the welfare of its way of life and high education. It has a great extension distributed in 450,295 square kilometers and a population that hardly surpasses the 10 million people, but that is the one of greater population between the Scandinavian countries. A country with high human development could not ignore the conservationist and resource-maximizing spirit. Sweden is an excellent tourist attraction, but it is also a model to follow as a society; many people in the world are eager to visit it and see with their own eyes how life is lived in a country that is advanced in every aspect. 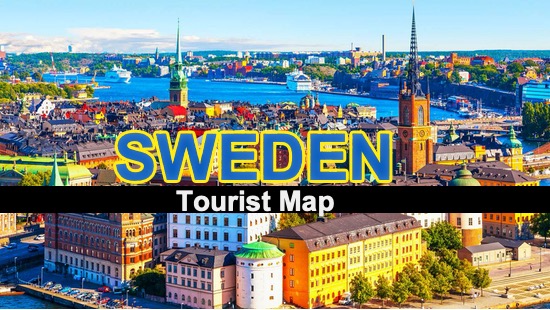 Beautiful natural landscapes, and medieval buildings are the dressing up of the Swedish image, in the face of a tourism of height. Sweden is famous for the celebration of Midsommar, a pagan ritual where mythological symbolism takes over the attention of the spectators through songs, dances, drinks and food. Sweden has magnificent cultural and natural reserves where its landscape and architecture take visitors to a world of stories. Of course, the winter season is a perfect excuse to visit Sweden.  The Northern Lights and its winter forests offer unique views and space for many activities. Hiking, snowmobiling and even ice-breaking are the options. For those who opt for the seascape there are islands such as Marstrand or Tjörn and of course all the options offered by the Baltic Sea coast.

It is the capital of Sweden of the most important among the Scandinavian countries, and one of the most important ports of the Baltic Sea. It is surrounded by numerous islands and bridges. Despite its small size, this city concentrates a large population and a variety of popular sites such as museums, streets and parks, where the options are at hand to be exploited by those who visit. Its historical shell is concentrated on a small island called Gamla Stan, which has piers and boats for pleasant strolls. Djurgården is another popular area, which houses museums of Nordic cultures and attractions such as beautiful parks or the Skansen Zoo. The City is the most cosmopolitan area of the capital. Here you will find beautiful architecture and a wide range of restaurants, clothes shops and souvenir shops. It is a beautiful place worth visiting.

It is another city of great importance in the Swedish tourism. Considered the second largest, located in the coastal area west of the country. It’s a university city, since in her they take place important cultural and tourist events that it has been gaining relevancy in the last decades. The fish market in Gothenburg offers an excellent quality of marine products from the Baltic Sea. This site designed on the basis of Gothic art, clean and attractive offers places where you can taste excellent typical marine dishes. The art museum of Gothenburg is one of the emblems of the city. The Nordic art takes it well with works of the height of Picasso, Van Gogh among others. A boat experience is a different option from the urban centers that the city offers. Walks between low altitude bridges are made fun thanks to the Paddan tour.

It is one of the tourist destinations open and serene, since ideal to give a tour are hard. Place of myths and legends Vikings, is adorned with beautiful gardens, museums and churches. Pilgrimage route, and well maintained museum farms, give you a different option full of country atmosphere in the best Swedish style. The Gamla Upssala is the old part of the city. A church dating from the 12th century is set among the many burial grounds of the Iron Age. Here we talk about the origins of the world where ancient Nordic gods have their dwelling in three main tombs. There are tours to the city where you can adapt the budget according to the type of tour you want to take. The tours available include visits to Uppsala Cathedral, museums such as the Gustavianum and the various gardens in the city.

We are located in the most northern part of Sweden. It is an invitation to the Arctictic hull where you can enjoy different walks with northern lights as the main dish of their tourism. Despite the limited communication given its difficult location has many options for winter activities. This city has many curiosities, such as the exaggerated arctic temperature. Also they emphasize its interminable nights in great part of the year. While in summer times the days usually have 24 hours of sunshine. In this city you can find the biggest ice hotel in the world. A little bit of extreme tourism to the letter. It is also known for having one of the largest open air mines on the planet.