The concept of green or sustainable tourism is the vocation of this eastern Canarian island. Lanzarote invites you to commune with nature, exotic and wild, whose aesthetics are interpreted in a visual experience that makes you fall in love. Here you can appreciate the majesty and greatness of the earth’s force. So much so that its very fauna and flora has had to adapt to the environment, making us understand how small we are before mother earth. A place where people meet to walk together in caves, volcanoes and valleys of strange beauty, must have an added information as we present in our tourist map of Lanzarote. It is ideal to share this information with your travel companions. Together they will understand what awaits them; an unprecedented conservation experience. Get to know the best of their villages and remote places throughout this post.

Lanzarote is an island that contains a little bit of everything and is often a magnet for those travelers and explorers. It has a considerable proximity to the African coast, only 140 kilometres away, and is an island located in the northeast of the Canary Islands. Its ecosystem is a stronghold of intense volcanic activity that had its golden age around 4,000 million years, this can be presumed to be one of the most remote landscapes on earth and the modification of the environment has given it a unique touch in the world. Its landscapes are true treasures made up of a surreal range of colors in which people and crops that seem impossible to produce fruit in such a characteristic terrain come to life. Its capital, Arrecife, together with its towns, makes it the third largest populated island in the Canary Archipelago. 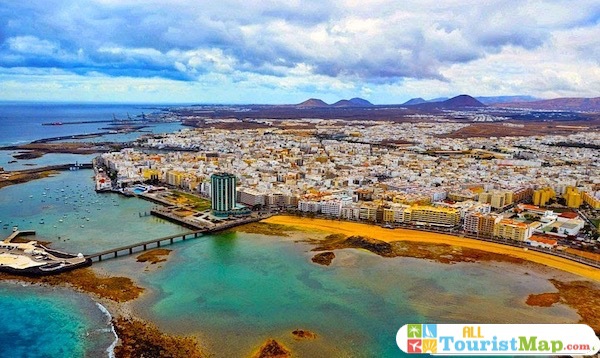 This island combines the best of nature with gastronomy and a recent hotel impulse that has made it turn towards sustainable tourism, under the sustenance code of Cesar Manrique, illustrious son of the island. In this island paradise a lot of places are waiting for you that enrich the view and love for nature. All of them are protected by international organizations such as Timanfaya National Park. The island is fortunate to have one of the largest networks of underground volcanic caves in the world, we talk about Jameos del Agua highlighting the Cave of the Greens among the longest and most interesting. Playa Blanca and Famara combining the best of the coast with picturesque villages, each with a unique style and landscape condition. We complement the list with natural reserves within the Chinijo archipelago and the La Corona volcano.

This island invites you to raise awareness of nature and how important it is to preserve it. Let its beautiful landscapes leave you a sobering example that time and wildlife are the main protectors of such wonderful environments. To know which are those natural and artificial sites that help to cultivate that conservationist spirit, we invite you to read this tourist guide of Lanzarote. We have chosen the best places to visit with all the information you need to consider what you are going to face in your next adventure, this time in this remote island. Note that when we refer to the nature reserves you can use our routes to easily find the adjacent villages in which you will make a stop before or in between to enjoy the rich cuisine and excellent atmosphere prepared by its inhabitants.

What to see in Lanzarote 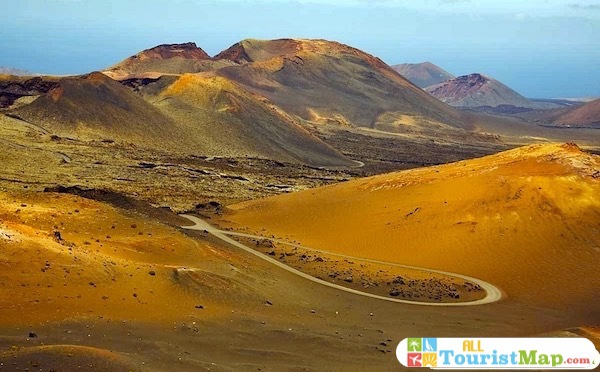 Declared a National Park in the 1970s. It is composed of a surreal landscape forged by the intense volcanic activity registered in the 18th century and which caused the destruction of nearby villages. The colors of this land correspond to an inhospitable environment dominated by lava and the little influence of man. It represents one of the most interesting views of the island. It is a site that can be accessed by paying entrance fees and exploring certain places, since the environment is protected. Although its volcanic activity has not been visible until the 19th century, the heat that emanates from the ground will make you feel like you are on top of a natural time bomb. If you are passionate about science and rare landscapes then this is your chance to come and take good pictures. 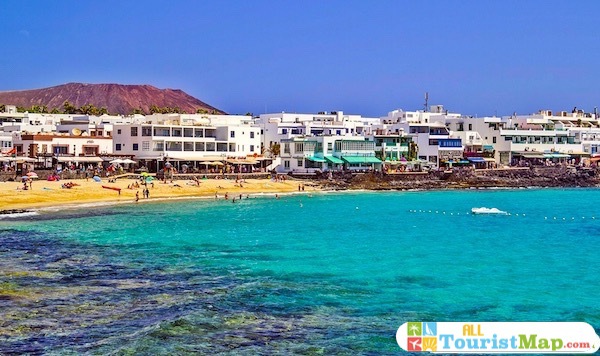 Its high temperatures are responsible for monopolizing tourism in the winter season. This population is one of the hottest places on the island. Its tourist offer has been expanding to compensate for the burden received by its beautiful beaches such as Playa Dorada and Playa Flamingo. Over the years, the hotel industry has been increasing considerably and has managed to position an excellent range of leisure activities. Its nightclubs have different styles adapted to any type of visit. History can also be glimpsed in its central area, which in turn is connected to its promenade. As it is one of the most preferred tourist centres in all the Canary Islands, the effort of its inhabitants to turn its streets and premises into places full of fun is justified. You will have a picturesque village close to the most emblematic places of the island. 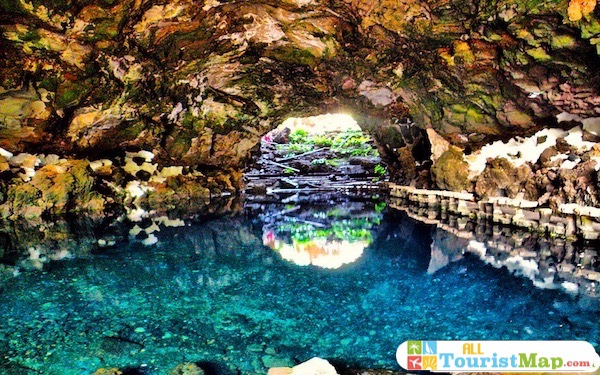 Underground volcanic action has left one of the largest caves in the world in the north of Lanzarote. Just imagine the vast amount of lava that shaped this place. Due to its proximity to the sea, its rocks have managed to filter the water, so that inside the caves a kind of underground lakes are formed which justify the name it bears. The Jameos are the product of the collapse of the tunnels leaving a network of tubes exposed. It is known that they are not the only ones present on the island, however they are the most popular and suitable for an interesting tourist walk. Inside, a particular underground fauna awaits you, as well as places equipped with a cafeteria and an auditorium. The entrance fee is 9 euros and the night visit is usually more interesting due to the colour tone it acquires with the lighting. 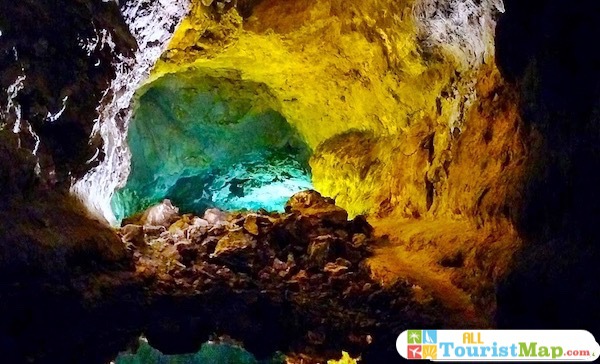 Corona Volcano has been responsible for many wonderful geological accidents. With an antiquity of 4,000 million years it impregnates the look with majestic shades and reliefs. It is practically part of the Jameos de Agua, however it stands out for its 6 kilometers long. It is impressive only to visit a place that has been carved in the oldest ages of the planet. The complex geological activity is perfectly interpreted by the guides; the tour is seasoned with history and anecdotes from the region related to the site. This cave served as a refuge for the inhabitants from slave and pirate raids. The mineral composition together with the hallucinating forms left by the lava flow and the erosion have made its main attraction, the spectacle of colors, the most precious and inspiring in scenery and photography. 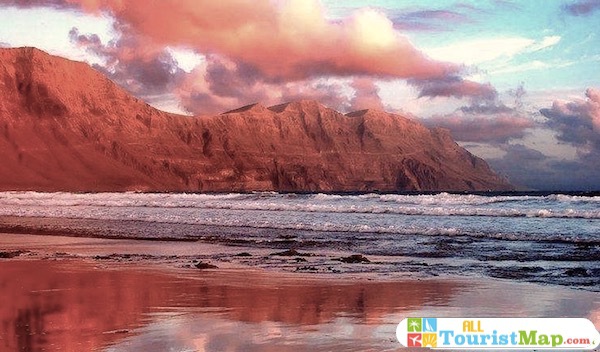 This beach, with a huge cliff in the background, is the highest point on the island. It represents one of the most impressive visual shows that you can see in Lanzarote. This site has ideal winds for sports like windsurfing and kitesurfing. Many people come to this beach to experience the adrenaline, we are talking about people of all ages. Its coast of about 6 kilometers of flat sand, allows it to be the ideal space for different sports activities. The sunsets and sunrises bathe its blond sand, giving a romantic landscape ideal for couples. The adjacent village is called Caleta de Famara and awaits you with a wide range of marine cuisine; a sober and serene atmosphere. The harmonious natural scenery is easily accessible before or after a break in its comfortable terraces.

There are more than 9,000 hectares of nature reserve. This archipelago is located in the north of the island of Lanzarote. The group of islands is composed by the islands of Montaña clara, La Graciosa, and Alegranza mainly. It is a huge marine reserve that is camouflaged in its own name; Chunijo means “small” according to the local language. The geology of the area itself is complemented by the biodiversity with shapes and colors that build a landscape that gives the impression of traveling to some remote planet. Fortunately the animal life is in an optimal state of conservation and many endemic species in the site are being studied. It also serves as an archaeological site for the scientific community. It would be a mistake not to include this place in your list, which adds immense value to your ecological experience. 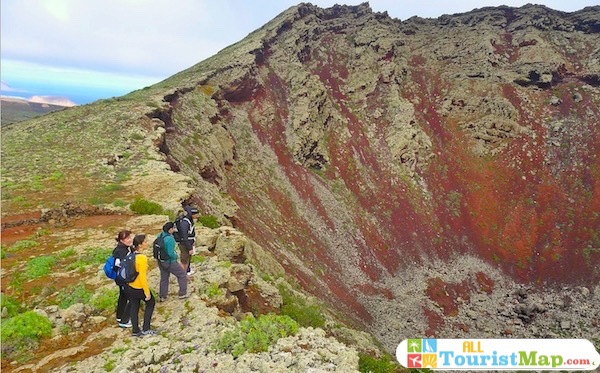 The valley surrounding the Corona volcano has an unusual shape, due to casts from ancient eruptions. The flora that was later formed there seems to have been brought from another planet. This natural monument, which can be reached with previous preparation, is the most important place for excursions on the island. The nearby town of Yé denotes an almost ghostly landscape for the quietness that inspires the distance. To access the Crown Mount you have to take a path of approximately 40 minutes from the village. Already in the ascent it begins to feel the elevation of laque we can take advantage of to take some beautiful panoramic of the firmament. It is worth mentioning that you can add the Cueva de los Verdes next to the excursion; although the normal thing is that due to its magnitude we dedicate a special route to it. 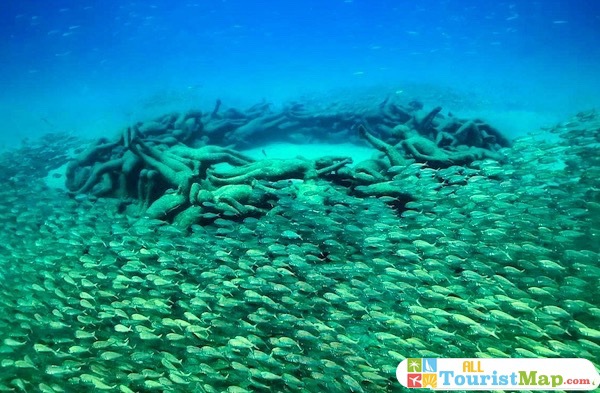 The concept of a water museum is taking off inviting the curious to venture into the depths of the sea while contemplating art. Lanzarote has managed with its natural conditions to add this kind of attraction. The Altlántico museum is the work of Jason deCaires, a precursor of this concept. Divers and freedivers will have the opportunity to take advantage of the warm currents, around 300 sculptures that serve as artificial reefs. Impregnated with an ecological message to those who observe it, the aim is to promote the protection of the seas and oceans. Artistic works based on human forms inspire the link that man should have with nature. It forces reflection in a moment of intimate contact while making the underwater walk. 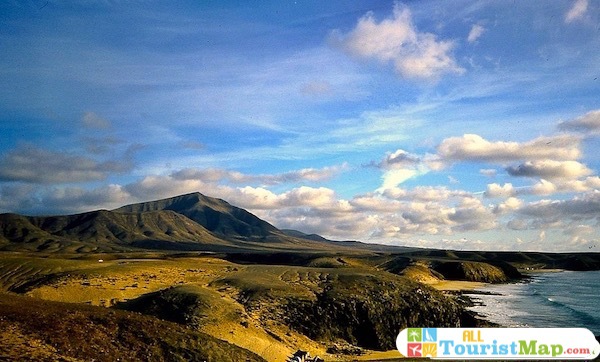 This natural monument forms one of the most remote landscapes of the island with great importance for scientific research. A huge massif of about 3,000 hectares adorns the south of the island with interesting exotic flora and fauna. A little bit of prehistory is immortalized in its engravings and vestiges of the passage of man; you will see incredible fossils from the Pleistocene period. The landscape is composed of high formations molded by the action of nature; we can highlight Las Hachas, La Aceituna with a view and access to beaches molded by the volcanic environment. Also you will be able to cross a set of ways that the man used in the antiquity. This place is also a bird conservation territory from which you can take advantage of thanks to the sighting of migratory and local species.

Map of hotels in Lanzarote

According to the places you are going to visit and who is going with you, you better take into account which place and what kind of accommodation is going to be convenient for you. Lanzarote has a lot to do; as an emerging tourist site it has been filling those suggested hotel gaps in its main places. That’s why in our map of hotels in Lanzarote we link you to those hotels in different places so you can compare and plan your adventure well. Suites Lanzarote Gardens like most hotels outside the capital has no problem when it comes to distance thanks to its transport service. Its fun and elegant atmosphere, motivates to recommend it to you, apart from being one of the best valued on the island.

Video of the most impressive places of Lanzarote