Minorca is an island that can be visited all year round, the beaches, the archaeological sites, all the culture of the different civilizations that have left their mark, about all the people who have gone to conquer and visit the island. In this tourist map Menorca will show you why it is the best destination to spend a good summer holiday. Along with its famous coves, it has a variety of tourist sites to visit and enjoy your stay. It saw the passage of Phoenicians, Carthaginians, Romans and Saracens until Alfonso III made it a Christian land. It endured looting and was the object of secret pacts and barter, not to mention the English occupation during almost the entire 18th century, forming a unique culture that mixed with the best of nature will make your visit an unforgettable experience.

This island is the first Spanish land where the sun rises. Menorca is the easternmost of the Balearic archipelago as well as the northernmost.  Its population is 91,601 inhabitants. Its surface area is just over 700 square kilometres and the longest distance inland is 48 kilometres. The island in the north has the oldest soils formed by silica rocks and slate, and in the south the soils are calcareous and the beaches are white sand. In its capital, the land opens up in two halves, and there are still more than seven kilometres of sea that go into the island, it is a unique shelter arranged on an exceptional orography.  Nature helps to maintain Menorca’s reputation as a rugged, indomitable and magical land. The island is a biosphere reserve that holds small, almost virgin paradises. 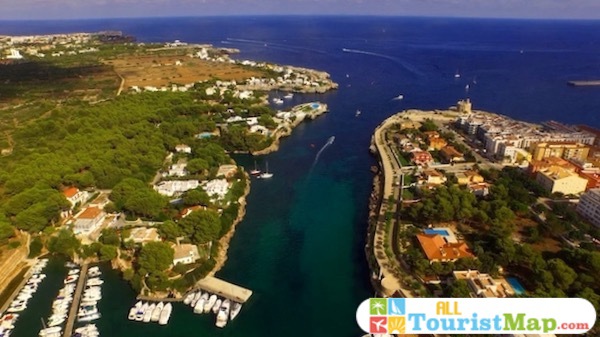 The interior is an abrupt territory where meadows and hills moistened by the Mediterranean shine. Archaeological sites alternate and are even confused with the historical centre of Menorca and its coast. It is a destination par excellence of beaches and coves that in turn are home to modest estates and picturesque villages. The Menorca Tourist Office has been at the forefront of innovative projects, expanding into adventure and archaeological tourism, integrating a variety of tourist sites in Menorca. Dare to enjoy the turquoise blue characteristic of Galdana or Macarella, walk around Mahó and get lost among streets full of beautiful houses, palaces and churches, in towns such as Fornells, Binibeca, Ciudadela, Mercadal or Alayior. Immerse yourself in the remote past by visiting the Talayots of the pioneer villages. A route that borders the island through Camí de Cavalls will make you experience the island in a peculiar way.

This cultural and natural heritage is unique, a magnificent open-air museum, which must be accompanied by our Menorca tourist guide. It has many archaeological remains, where it can be presumed that it even has up to three hundred remains spread throughout the island. There is a lot to see here and the options are abundant, both for the many known sites, as well as those yet to be discovered. The island is a box of surprises both on land and at sea. A walk through the historic center, try the ointment, take a picture in a small fishing village, cycling or hiking, go on a bender at night. This makes it essential to leave you in this Minorca tourist guide, some good routes that we have taken great care to draw up and put at your service.

What to visit in Menorca 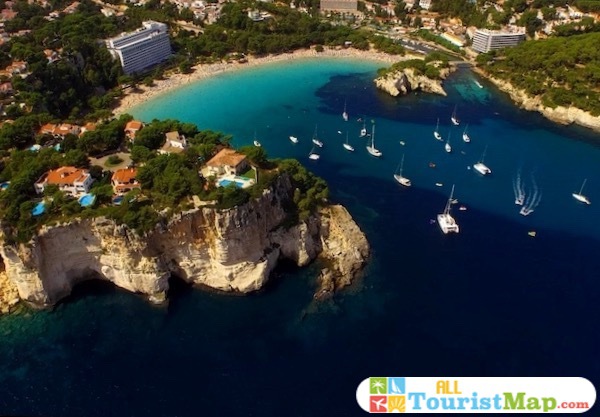 It is a beautiful beach that belongs to the municipality of Ferreries. It is one of the most frequented places by tourists. It has a wide coastline and has a promenade where you can go on foot, or by bike. There is a central street with access to services such as hotels, restaurants, bars, bus stops. In its port there are moorings for those who wish to arrive in their own boat. Many people go there in high season and the place is full of activity.  It is normal to see sailing boats standing in the middle of the cove. You will be delighted with the view from the vantage point. The cove is a connection point with the main coves in the south of Menorca, such as Macarella and Macarelleta, or Cala Mitjana and Mitjaneta, which can be reached on foot. For all these reasons, include it in your plans, as we are talking about one of the most spectacular places on the island. 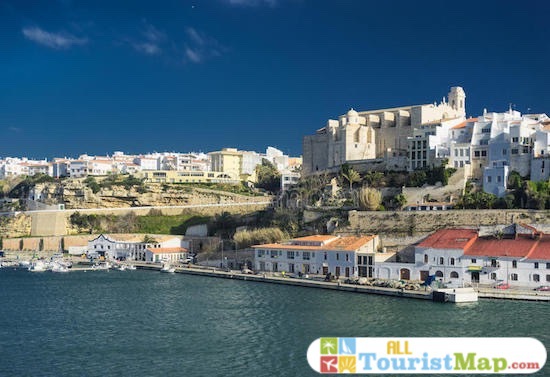 Those who know recommend reaching the capital by sea, the reward is superb. The merchant and sports port stands out, a port admired by Barba Roja. It is the great meeting point reserved for fun, especially when it is the moon that commands. From the mouth of the estuary, the houses of Mahon stand out against the cliff under the ruins of the castle of San Felipe and the imposing walls of the Fort Prison of La Mola. The fights to dominate it over the centuries have marked its history and profoundly transformed its personality. The English colonial imprint remains alive in a maze of streets that force you to get lost. Its fortified route leads you to share in the remains of the medieval wall, also being able to see the Church of Carmen. 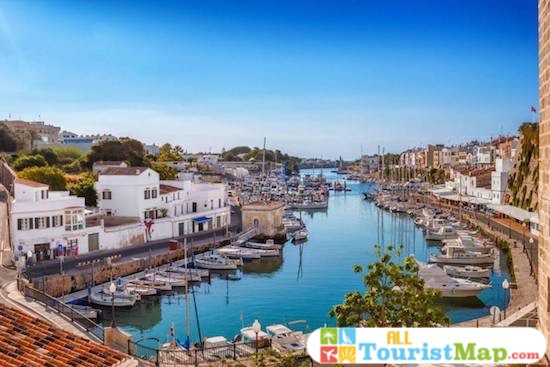 It is a very important point for the tourist, the cultural center on the island. It is one of the great cities of the island, an unquestionable visit. Everyone who comes to visit Minorca comes to Ciutadella. Basically because of the atmosphere that can be perceived, it will shine the Muslim origin, who were the ones who brought the capital in the island, the roads and then the architecture that the city has. It has many beautiful buildings loaded with history in stone. The town hall was the old palace of the Almojarife of Menorca. Then there is the cathedral, which is the main one on the island, apart from the many palaces of the noble families. Walking through the Ciutadella is like taking a walk through the history of Menorca and finding a route through all this and the exhibition rooms. 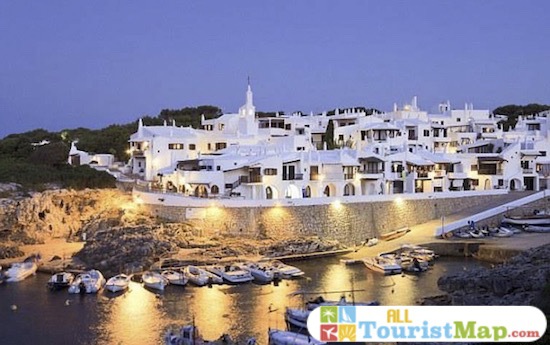 It’s a town located in the southwest that you have to know. At the height of summer it is one of the busiest areas and without doubt of the highest level. From the entrance you can see a lot of places like restaurants and taverns to visit. It is a quiet village, typical of fishermen that was built in 1970. Its design evokes the typical Mediterranean fishing village. Something peculiar in this village are the houses painted exclusively in white, so take sunglasses. The area of the small fishing port has the most typical views with all the little houses next to the sea, making a nuance with boats. It has a very original old town with very lively streets. The seaport, is without a doubt the most attractive place, it has little depth and crystalline waters ideal for fishing, which gives it a placid atmosphere compared to other ports of intense activity. 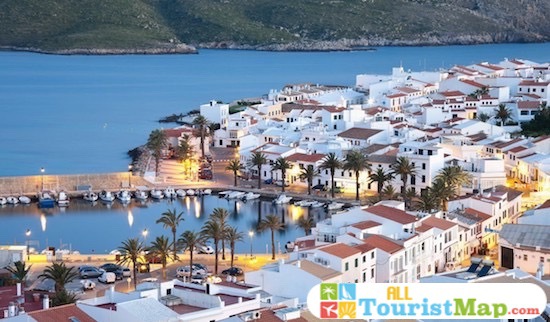 It is part of the municipality of Mercadal. Its surroundings are very beautiful, its beaches, its cliffs and at the bottom, the crystalline water. The Camí de Cavalls passes through here, an old defensive path that is now a real hiking route. It has a large port, which registers a great activity in the summer months. It is ideal for walks along its quays and a large bay of three kilometres lined with small houses, with the typical aesthetics of a seafaring town that breathes tranquillity. Visit the 19th century church of San Antoni Abat, the 17th century Castle of San Antoni. The town’s major festivals are very popular during the festive calendar. You can also go up the tower of Fornells. It is a four-level coastal defensive tower, the highest in all of Minorca, with a panoramic view of the bay and the town. 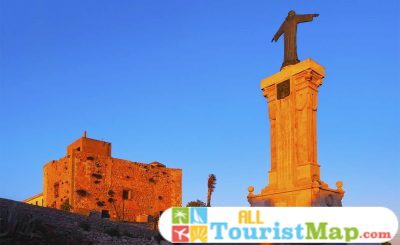 Given its privileged location, it can be seen in practically every municipality in Menorca. It is situated next to the town of Mercadal, where you can enjoy the best views of the island. It is the highest hill on the island, and its elevation is 358 metres above sea level.  On a clear day you can see the whole island, you will like the spectacular view it offers of the bay of Fornells. At the top, you will find the remains of an old fortress, a Christ with an enormous pedestal and the sanctuary of the Virgin of the Bull whose origins date back to the 17th century. Inside the sanctuary you can see the image of the virgin carved in wood, and its legend. It is the spiritual centre of the island, deeply rooted in the memory of the Menorcan people.  If you want to see an amazing sunset come here. 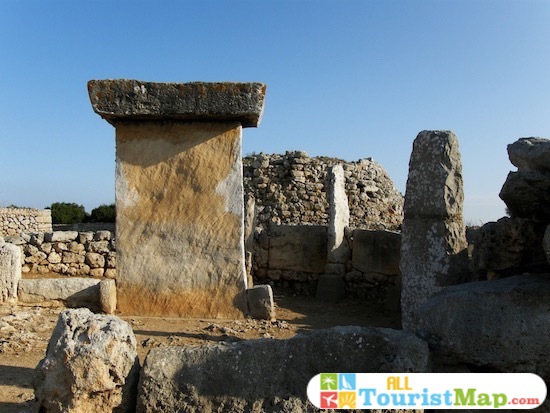 They are apparently simple constructions, which have resisted the passage of time and have lasted until today, intact and omnipresent in any corner of the island. The jump in space is short in time to reach the nearby Talayot de Trepuco, where a Taula almost five meters high stands out. Its name derives from Atalaya. It seems that it was the sacred place of the Talayotic settlements. In just seven hundred square kilometres of surface area, Menorca is home to more than one thousand five hundred Talayotic monuments, two for every square kilometre. The monuments are as unique as the density in which they are found. The Talayot de Trepuco is the island’s prehistoric monument par excellence, unique and singular. Unknown in other latitudes, and so simple that it consists of only two large carved slabs placed in the shape of a T. 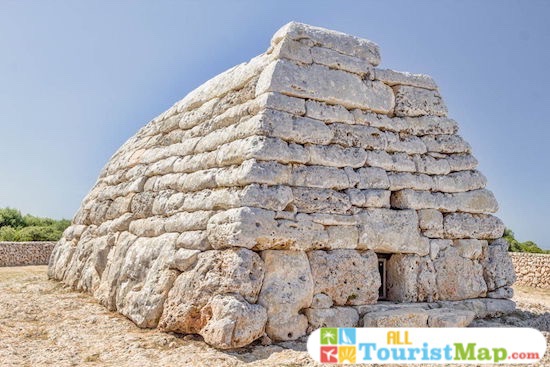 It is one of the archaeological sites of the island, which is considered the oldest and best preserved funeral building in Europe. It dates back to 700-400 BC, at the height of the Bronze Age. The first inhabitants arrived on the island from the Iberian Peninsula and they used it to bury their dead, they were buried together. It consists of two floors. The upper floor was where the bodies were prepared for the journey that would later begin when they were brought down to the lower floor. It is a jewel of the ancient world belonging to the Talayotic civilization. It has managed to remain standing after so many centuries, thanks to the fact that for many years it was covered by vegetation. Thanks to the excavations and subsequent declaration of cultural interest by UNESCO in 1931, we can enjoy this architectural wonder today. 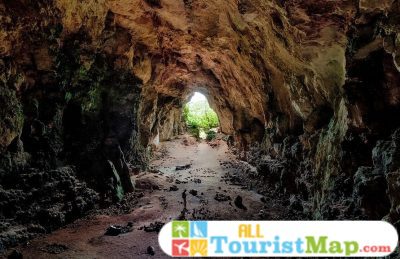 Some prehistoric caves, either natural or excavated by the early islanders, are the site of legends. This natural cave of colossal dimensions, located in the Binigaus ravine is recommended for adventure lovers. To get there you have to take a path of approximately one kilometre from the village Es Migjorn Gran on foot, finding yourself on the way with vegetation becoming much more natural on your way. An ideal excursion to go in groups on days when you don’t feel like going to the beach so much. Once there, look at its immense size, twenty-four metres high, one hundred and ten metres long and fifteen metres wide. Inside there are mosses and lichens which give it a mysterious appearance.  The experts assure that for the ancient inhabitants this cave represented the fertility of the maternal uterus, and also represented the trip to the beyond.

Map of Hotels in Menorca

A potentially tourist island is overflowing with hotel options. Each one is adjusted to particular needs and offers a variety of environments for you to choose the best place to go with you. On this map of hotels Menorca we have marked the most important and picturesque hotels on the island so that you can explore the scenery you will choose for your rest. If you like the sea view, flat and simple, we recommend the modest hotel Playa Azul. It is located in Cala Porter in Alayor. It has all the services of a 3 star hotel, modest and beautiful.

Video of Menorca, the most impressive tourist destinations