If you are looking for a destination with incredible beaches, imposing mountains, exquisite green areas, and a beautiful variety of historical, artistic and emblematic buildings, then we would like to invite you to get to know one of the most wonderful tourist destinations in Spain. This is the island of Tenerife, in the Canary Islands, Spain. In this destination that attracts millions and millions of tourists every year, you can find a real adventure, a party every day, as well as areas of relaxation and rest, of discovery and charm, and of magnificent views and landscapes that you will love. Below, we would like to invite you to check our Tourist Map of Tenerife and plan your next holiday in this beautiful city.

Tenerife, a paradise island located in the Atlantic Ocean and belonging to the Autonomous Community of the Canary Islands in Spain, has an area of 2,043.38 km² and a small population of just 894,643 inhabitants. This island has as its capital the city of Santa Cruz de Tenerife, and turns out to be one of the most famous tourist destinations in the region, receiving more than 5 million tourists every year. Tenerife is also known as the Island of Eternal Spring, mainly because of its warm climate with gentle trade winds and mild temperatures that during the summer reach an average of 25°C and during the winter the temperature reaches 18°C. 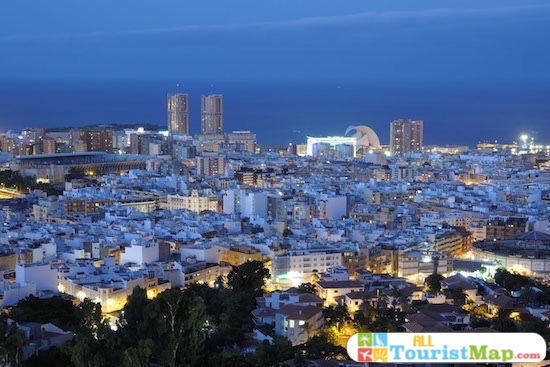 60% of Tenerife’s GDP comes from tourism, therefore, the island strives not only to generate excellent infrastructure and services for its inhabitants, but also to attract new visitors year after year, although it should be noted that the natural attributes of Tenerife, in itself, are already a great attraction for tourists from anywhere in the world. Among its tourist places, we can highlight the Teide National Park, catalogued as a World Heritage Site, we can also find the Anga Massif, its spas such as Playa Jardin, Punta de Teno, Playa de las Americas, Playa el Medano, and many other exquisite views. We can also find some architectural structures of historical and artistic importance, such as the Plaza de España, the Market of Our Lady of Africa, the beautiful Casa de los Balcones, the Plaza Europa, and its emblematic Black Castle of San Miguel, among many others, which will make anyone who visits the island, fall in love and excited with its natural beauty and lush landscape.

If what we told you before is of interest to you, we invite you to make yourself comfortable and even call your family or friends and share this information, because we are sure that both you and they will love the island of Tenerife, to the point of planning their next vacation in this incredible tourist destination. And just to increase your interest, we want to show you a tourist route that will take you through the most extraordinary landscapes of Tenerife, if you want an adventure, say no more! Join us in this tourist guide of Tenerife, and get ready to be impressed.

What to visit in Tenerife

National Park of the Cañadas del Teide of Tenerife 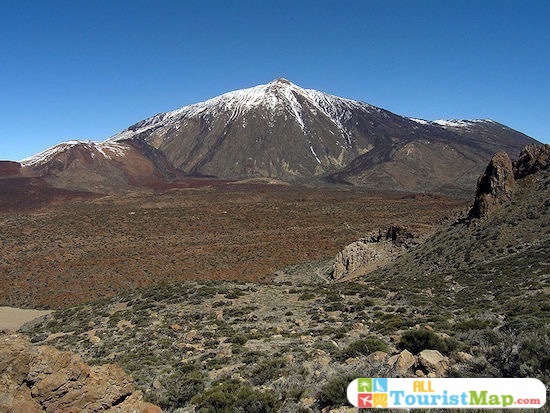 The National Park of Las Cañadas del Teide is located in the highest area of the island of Tenerife and the rest of Spain, being declared a national park in 1954, as well as a World Heritage Site by UNESCO, and Treasure of Spain since 2007. In the park is the renowned Teide Volcano, which is considered one of the highest peaks in the world for its 3718 meters. The dimensions of the volcano, surrounded by the clouds that form on its slopes, and the landscape around its route of ascent, are a majestic landscape of colors such as red, green and black of its volcanic stones, and as you go up you can see the volcanic activity of the past, as well as the pressure by altitude is increasing, and it is for this last, that this is a magnificent tourist point, but ideal for those prepared and with skills in hiking.

The Plaza de España, considered the oldest and most important in the city of Santa Cruz de Tenerife, built in 1929 and located between Avenida Marítima and Plaza la Candelaria. This popular tourist destination has a fountain designed by Genoa in marble material, as well as a large extension of green areas, ideal for leisure, reunion, quiet walks, as well as other musical, artistic, children, and social events, where they invite to participate and enjoy a pleasant moment to all types of visitors. And if you decide to go now, you will find its latest remodeling, a pool circulates in shallow water where you can also find several booths with tourist information. 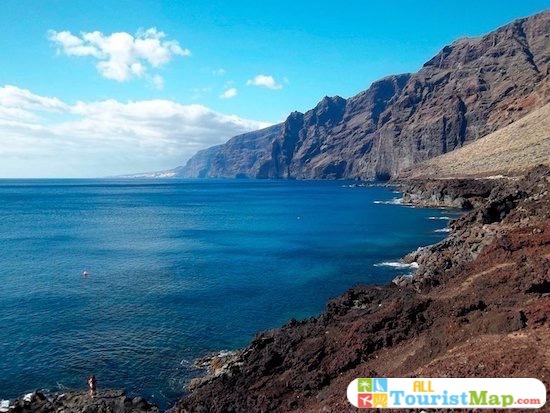 In addition to the mountains, squares, parks, castles and historical infrastructure, Tenerife also has a series of spectacular beaches, each different from the other, where the fun, sun, sand and sea invite you to experience one of the most heavenly moments of your trip. This Punta de Teno beach located in the north of the island, with black sand and crystalline sea, is one of the most virgin you will find, that is, although there are no booths, restaurants, or showers for the visitor, this place is still wonderful, quite busy and from the Punta de Teno Lighthouse, west of the beach, you can see its magnitude, beauty and nature, ideal to relax and rest any day of the week. 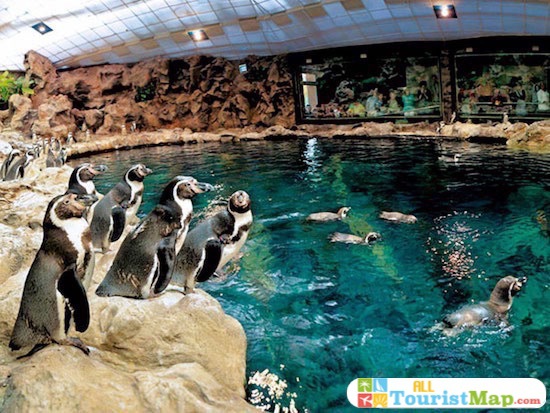 One of the points of enjoyment for the family is the incredible Loro Parque de Tenerife, a theme park with a surprising variety of animals from all over the world, now an international reference in terms of zoos. This obligatory point for every tourist is recognized for creating and taking care of excellent habitats for its different species. Among the most interesting enclosures is the aquarium, its penguin rooms and, of course, its colorful parrot show. And if you do not wish to leave without a souvenir, you can always find small souvenir shops and restaurants where you can taste delicious food, rest and talk about the wonders of this park.

Market of Our Lady of Africa of Tenerife

There is nothing more pleasant at the time of travel, than to taste the local dishes of the city where we are going, therefore, the Market of Our Lady of Africa is a mandatory stop on this tourist route. This market, also known as La Recova, is a building in Santa Cruz de Tenerife inaugurated in 1944, known as the municipal market of the city, and whose name is given in commemoration of the Virgin of Africa, the patron saint of Ceuta. This commercial complex consists of three floors where you can get more than 200 shops of food, ingredients, spices and other fresh local and international products, enjoy the cuisine offered by its restaurants or simply admire its structure of neoclassical colonial style and touches of modernity. 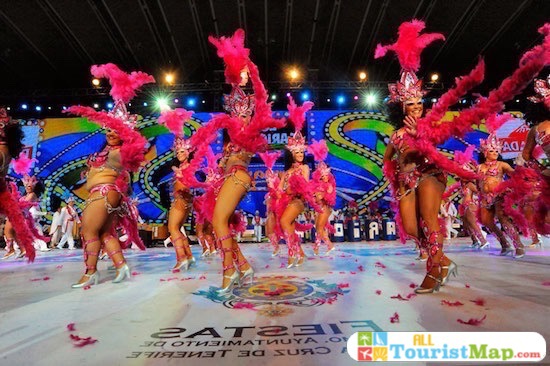 One of the most important and famous carnivals in the world, after Rio de Janeiro’s Carnival, is Santa Cruz de Tenerife’s Carnival; a popular party where hundreds of people take to the streets for more than a week, to be part of the long-awaited celebration, together with incredible, colorful and very happy comparsas, costume groups, and musical groups. A curious fact about this party is that in 1987, the famous Cuban singer Celia Cruz, along with the orchestra Billo’s Caracas Boys attended the carnival, making a square to concentrate more than 250,000 people and achieving a Guinness Record for the large congregation. 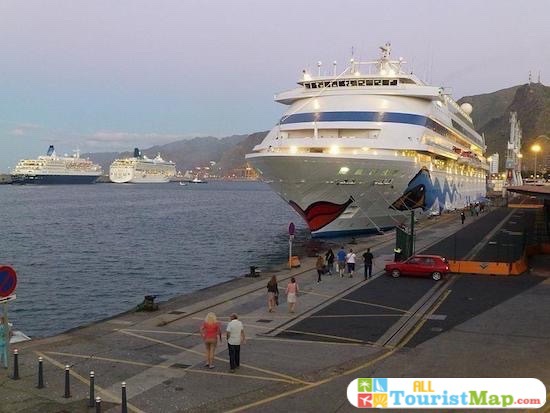 The famous and emblematic Puerto de la Cruz de Tenerife, also known as the Farola del Mar, is one of the most important points of the island because from here the maritime and land traffic of goods within Tenerife is controlled. Although the passage to this trade control center is limited, around it you can find a coastal town that is part of the historic center or city, and invites tourists to stroll through its streets, its entertainment centers, leisure, recreation, shops and restaurants where the tourist adventure of many just begins, plus it has an incredible hotel infrastructure that can please all kinds of people. 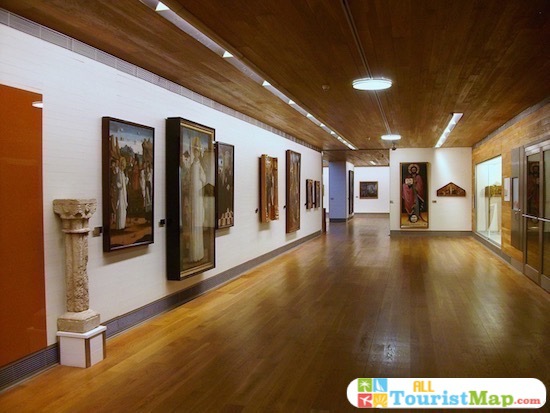 The Municipal Museum of Fine Arts of Tenerife, located in José Murphy Street in Santa Cruz de Tenerife, was built in 1929 by Eladio Laredo. Its facade is decorated with ten busts of different celebrities and illustrious figures of the history of Tenerife as Antonio de Viana, Angel Guimerà, Teobaldo Power, Agustin de Betancourt and others. In this art enclosure you can opt for a guided tour where you will learn about artistic and historical details of the city and the works on display here, or participate in some events such as conferences, musical auditions, book presentations, and so on. 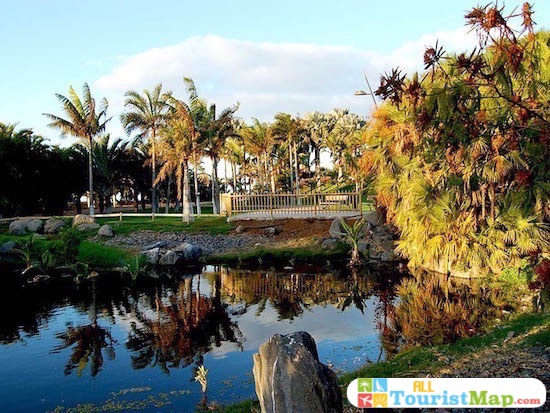 The famous Palmetum of Santa Cruz de Tenerife turns out to be a botanical garden of more than 10 hectares of extension, where we can find one of the major collections of palms, which they invite his visitors to estimate so incredible variety, accompanied of other structures as cascades, lakes, and creeks, as well as also it is possible to enjoy an incredible sight to the sea. The green areas of the botanical garden are divided according to the biogeographical characteristics of each palm specimen, collecting approximately 600 types. In spite of this, other types of trees, shrubs and other plants of different families or specimens are also cultivated. It is worth mentioning that this area where the Palmetum is located was previously a waste dump, but from 1995 a restoration project was started, thus achieving one of the most beautiful and emblematic natural spaces in the city. 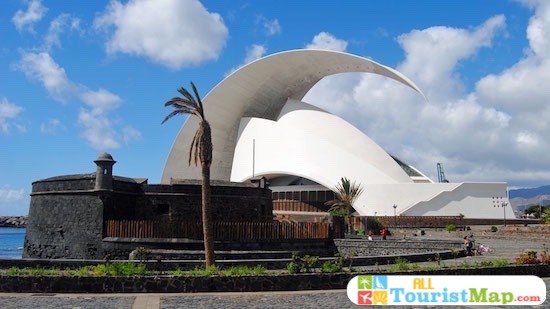 The Coastal Defensive Tower of San Juan Bautista, also known as the Castle of San Juan or Black Castle, was one of the most important fortresses of defense existing in the city of Santa Cruz de Tenerife, and is located in the historical center since 1643. Currently this castle does not maintain its initial appearance, because after years of operation, it began to crumble despite the many attempts of the city, to keep standing and restore that defense. This Castle is a circular tower, created with black volcanic ashlars, with an open esplanade and sites for various pieces of artillery. Although it is no longer used as a defence for the city of Tenerife against terrible foreign invasions as in the past, today it is an attractive point for visitors who are curious about its history.

Map of Hotels in Tenerife

An important detail to deal with is the type of accommodation you want for you and your companions during this holiday in beautiful Tenerife. Therefore, we want to give you one last suggestion that will allow you to enjoy this destination and that will not be far from the recommended points of interest in this tourist route of Tenerife. Therefore, check this Hotel Map of Tenerife and start packing your bags. The perfect accommodation would be the Riu Buena Vista Club Hotel, located in Horno Street, 35, in the Playa Paraiso Urbanization, Adeje, in Tenerife; with a range of 4 stars, it offers multiple areas of enjoyment such as spa, indoor and outdoor swimming pool, gourmet restaurants, bar, tennis court, free children’s club, and direct access to Ajabo Beach. It is located just 24 minutes from the Tenerife South Airport. This option is interesting, comfortable and ideal for many, who after enjoying a full day walking the streets of Tenerife, can get here, enjoy a while in your restaurant, rest and enjoy the view of the city at nightfall.

Video of Tenerife, the most impressive tourist destinations