Fuerteventura is a paradise island located in Spain full of beaches, architectural works that date from the first century, where the visitor can travel through time and be in the same place that were the first settlers in the area since the time of the conquest, within the tourist map of the city there are many options to know, a place full of natural areas important for the conservation of flora and fauna of the island, as well as you can connect with the culture of its population in its streets and art

This island is part of the archipelago of the Canary Islands, is located in the Atlantic Ocean, is part of the province of Las Palmas, located 97km off the northwest coast of Africa. Its capital is Puerto del Rosario, there is the Cabildo Insular, government of the island. It has an extension of 1659.74km2. This island has an arid climate, throughout the year the temperatures remain constant approximately at 21,1˚c. The island was conquered in 1402 by the command of Jean de Bethencourt and Gadifer de la Salle, from there began the gradual growth of the island today, tourism stands out as its main source of economy throughout the island, secondly the income comes from the fishing sector, livestock, and agriculture.

On the island of Fuerteventura there are very few inhabitants, the vast majority are employees of tourism networks in the town, this city provides a great place of recreation, one of the most visited sites of this town is the Reserva de los Lobos, which has a set of very strange plants, in the historic center of the city are architectural buildings of interest as the Villa de Gustav Winter. In the central area, apart from museums and cultural centers, there is the Sculpture Park. The natural spaces of this island are protected, assuring the well-being of the biodiversity of the zone, between the protected parks are National Park of the Islote de Lobos, Natural Park of Corralejo and Natural Park of Jandía.

The beautiful landscape that offers the island Fuerteventura is full of paradisiacal beaches, in its capital Puerto del Rosario, there are different centers of culture, and museums that house exclusive works of the town as the Sculpture Park that preserves the pieces of several authors of the municipality and other entities of the country. Fuerteventura is a site full of archaeological works that date from its conquest, becoming historical treasures for the island. The natural areas are the most striking of the island, not only for having majestic beaches but also for having mountains as is the Mountain of Tindaya.

What to visit in Fuerteventura 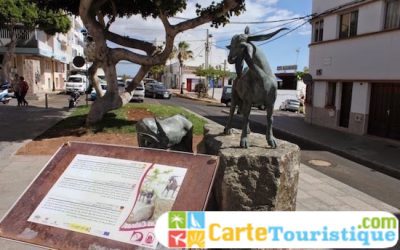 This famous park is located in the capital of the island Fuerteventura, in Puerto del Rosario, for it is called the City of Sculptures. It’s a large park where there are more than a hundred sculptures scattered among small squares, squares and roundabouts within its facilities. Among the most outstanding sculptures is the one located in the Esplanade, a round fountain made of cement and bronze that is shaped into allegorical figures of the main characters in the development of Puerto del Rosario, another attractive sculpture is Fisherman of Old by Juan Miguel Cubas in 2003, Offering to the Sea created in 2004 by Demeterio Martin, in granite and the Homage to the Moon by Reinaldo Paluzzi, a steel piece.

House of the Colonels 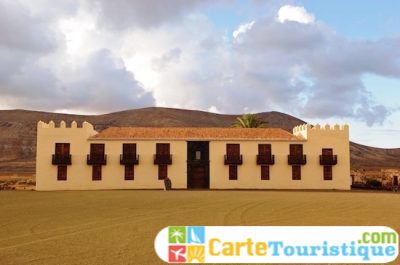 This building is a mansion that is located in the municipality of La Oliva on the island of Fuerteventura, was built in the late seventeenth century with the aim of serving as the official residence of the colonelate. Its architecture is military, has two towers on the main facade, as well as eight wooden balconies that reach a single full balcony on the side of the mansion, the traditional Canary style. This building contains several spaces around it that communicate with each other, starting with the parade ground in front of the main facade, the stables with stone walls, the colonel’s rose, an agricultural space, an esplanade of acts, and two small houses attached to the mansion.

It is one of the most important towns that is within the street map of Fuerteventura, forming part of the ancient settlements of the island, the Mahos were the first to occupy it in the first century Gadifer de la Salle, from Lanzarote was one of the first conquerors of the island, first arrived in 1402, the Playa del Pozo in Corralejo. Among the tourist sites of this place are the Caserones de los Moriscos, extending along the Playa los Pozos to Playa del Moro, dry stone structures, with a circular plant, are used some by residents and others by tourists. There is also the Osario, an archaeological site located at the entrance of Corralejo, formed by three accumulations of archaeological material of bones and aboriginal ceramics. 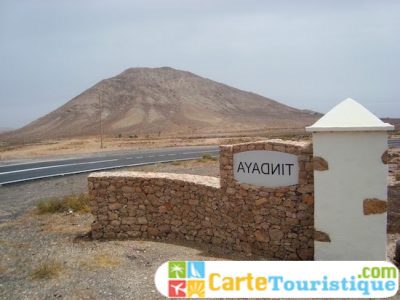 This mountain is part of the places to visit in Fuerteventura, is located in the municipality of La Oliva, considered the most symbolic natural monument of this island.  This spectacular place originated as a result of intense erosive processes, is characterized by the quality of the stone that constitutes it, it is a light gray-brown trachyte with a peculiar grain. This mountain presents a special historical and archaeological interest, due to the engravings that it houses, since it was the sacred place of the majos, aboriginal population of Fuerteventura, in this area there are also passages with African influence. It was declared a Site of Cultural Interest, a Natural Monument and a Point of Geological Interest because of its cultural and historical value. 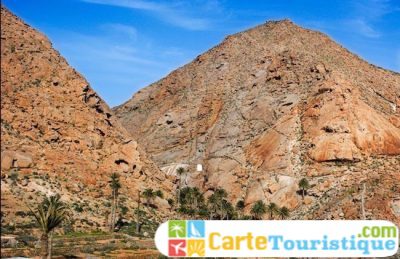 This splendid natural space is located on the island of Fuerteventura in the municipality of Betancuria. It was created in 1987, becoming a protected area due to its ethnographic and geomorphological values, there are important areas such as the Natural Monument of Ajuy and other protected areas. The tourist attraction of this place is due to the natural spaces and their biodiversity, finding deposits of ancient materials, fossils of marine animals already extinct and oceanic sediments. This park has a characteristic landscape given by the unique chromatism between soft-looking backs with large U-shaped ravines. This space also serves as a habitat for a large number of species. In this place scientific activities, conservation and free walking or in small groups are carried out.

This beautiful place is located to the northeast of the island of Fuerteventura, the origin of its name is that in the past on this island inhabited monk seals or sea lions, unfortunately, were eliminated by the same fishermen. This islet is part of the National Park of the Dunes of Corralejo, where more than 130 species of plants such as hawthorn, matamoros, gorse and a unique species of the island, the Everlasting Sea Lions, are found. The attractive sites of the island are the beaches, natural pools, salt marshes, coves, old lava rivers and picón slopes.

Mills and Mills of Fuerteventura 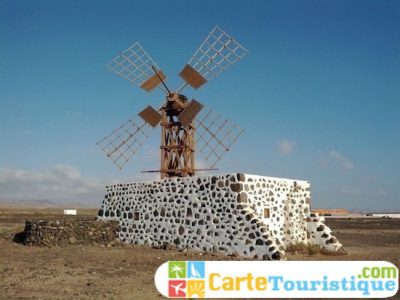 Due to the conquest of Fuerteventura they were forced to look for other alternatives to obtain resources, this led to the use of windmills from the late eighteenth and early nineteenth centuries, at this time prospered the cultivation of alfalfa, tomato, barley and wheat. The introduction of these cultivation tools was facilitated by the presence of the trade winds, their great source of energy, being the traditional windmill the first to arrive at the island of Fuerteventura. In July 1994, the mills and windmills of Fuerteventura were declared an Asset of Cultural Interest in the category of monument, existing in several municipalities of Fuerteventura, La Oliva, Puerto del Rosario, Antigua and Tuineje. 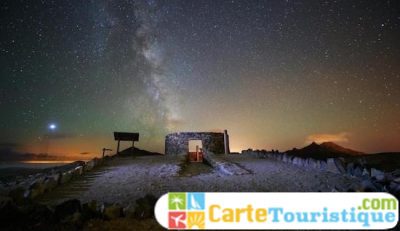 This curious viewpoint is located in Pájara where there is very little light pollution which allows you to enjoy a wonderful starry sky. In this viewpoint you will find interactive elements, a scale model of the solar system, a skyline, and supports so that visitors can place their own telescopes and photographic equipment. This is an ideal place to get to know and observe the universe, also the beautiful landscape it offers towards the Montana Hendida, the Montana Cardón Natural Monument and the Degollada del Viento. Every April 20th the island of Fuerteventura celebrates the World Night of the Stars where visitors come to the viewpoint to enjoy the starry sky. 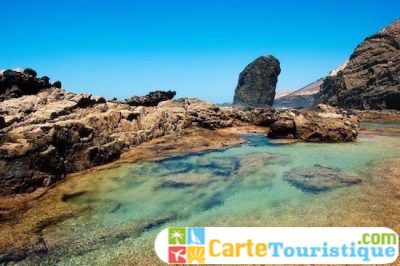 It’s located on the peninsula of Jandia, at the southern tip of the island of Fuerteventura, is considered a national park since 1987. It constitutes an almost intact and imposing landscape, full of natural elements of great value, to such an extent that it represents one of the most valuable and peculiar samples of Canarian nature. . Its flora and fauna have abundant spaces, endangered species and protected species, have in this place well preserved habitats and others very threatened by man, being also the habitat of some exclusive species. For birds, it represents an area of vital importance, with species protected by international regulations. Among the animal species, there are 28 birds, 3 reptiles and 12 mammals. 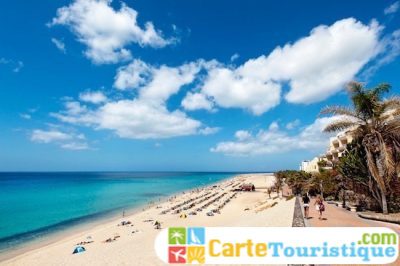 This majestic scientific and natural jewel is located in the municipality of Pájara in the town of El Morro. It is a beach of very fine sand, with clean waters of a turquoise color, some water sports are allowed such as windsurfing, and scuba diving. This space is catalogued as Protected Natural Space since 1994, with a total surface of 115.6 hectares, the objective of this declaration was to preserve its great coastal ecosystem, known as the Saladar de Jandía, a plant community, where the great difficulty that these plants have is the absorption of a large amount of salt water, so these plants have chosen to store a large amount of water in its thick leaves decreasing the percentage of salt.

Map of Hotels in Fuerteventura

The great tourist development that has the island of Fuerteventura has produced a lot of options for the accommodation of visitors, these sites can be found on the map of hotels in the city, where you can get hotels in different areas of the island, among the recommended are Dunas Club Apartments located in Corralejo Beach, but the center just 2 km from the central area is the Mirador de Fuerteventura.

Video of Fuerteventura, the most impressive tourist destinations