Tourist map Alicante will put on the menu a city full of light and with the smell of the sea, definitely the best destination for summer days. Good weather and long sunny days make it an attractive place. This Mediterranean corner is highly valued by its people, who are used to receiving foreign visitors openly in their land. Its beautiful beaches are waiting for you, and there, besides enjoying the sea, all its possibilities of leisure and water sports. The city offers its local festivals, gastronomy and leisure activities all year round. An incredible climate, and a beautiful port are the ingredients that establish a unique brand, a meeting point for everyone. Come and stroll around its historical sites, experience its latent commerce, ready to meet the appetizing demand of those who visit it. If you are looking for a cultural vacation, besides sun and rest alicante is the perfect place.

Alicante is a magnificent city, fortunately open to the Mediterranean, as can be seen from the Puerta del Mar square or by walking along the Postiguet beach promenade. Escorted by Monte Benacantil, the same place where the Castle of Santa Barbara is located, you can see an excellent panoramic view of the city. With a very pleasant climate, mild winters and warm summers defines its Mediterranean temperature with an average of 18 degrees centigrade. The city of 329,988 inhabitants make this city-municipality, one of the most populated of the Valencian community. During a walk through the historical centre of Alicante, you can visit the Basilica of Santa Maria, the oldest one. Near the town hall you can taste a paella in one of the restaurants, between the old and the new city, to be able to see closely the Concathedral of San Nicolás de Bari, built in the 17th century. 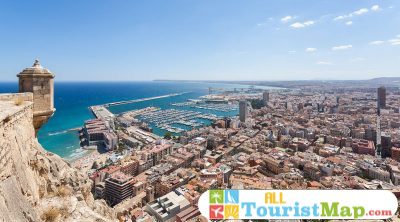 Of the places to visit in Alicante, as reference you have the picturesque streets of the Barrio Santa Cruz. If you prefer a bath in the beach you have one of the favorites and with greater coast, the one of San Juan. The fun can’t stop and as next destination we recommend you the prestigious Provincial Archaeological Museum, with its collection of Iberian and Roman remains. Another interesting place you cannot miss is the Bonfire Museum, dedicated to the San Juan festivities, declared of national tourist interest. After a break after lunch, our street map of Alicante will guide us as to where to spend the afternoon. You can go to the Central Market in Alicante, which is easily accessible by metro. The day ends in the city falling into the sea thinking already in the dinner in the Levante’s Quay where we will find the best night amusement.

This Alicante tourist guide is useful to familiarize yourself with the places to visit, as well as the access to them. Parallel to this tool, it complements your plan by locating the Alicante tourist office, where you will be able to provide detailed guidance, such as a street map and guided tours to various places of interest. It should be noted that several tourist information points are distributed in this city. The city invites you to get lost in its palm-lined promenades and its squares, which are surrounded by lush vegetation. It is a way of breaking the ice for newcomers, so it is the perfect excuse for you to locate this point in the Esplanade of Spain. Visit the craftsmen’s stalls that display their curious goods all year round along this wide promenade.

What to visit in Alicante 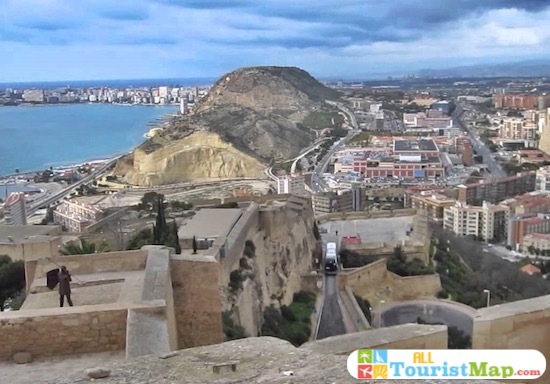 On the heights of Mount Benacantil, 200 meters above sea level, a beautiful panoramic view of the Mediterranean awaits you. This castle is located in the centre of Alicante. It is a bastion of the Muslim Wars. It owes its name to the name of the day when Alfonso of Castile took it from the Muslims, at the end of the 9th century. In 1961 it was declared a National Historic and Artistic Monument. In its guided tour, you can discover the various legends that are contained in these ruins. The people of Alicante say that in the early morning you can hear noises and shouts that are apparently difficult to explain. To access it, you can go up on foot, in your car or in a tourist bus; although the best option is a walk to enjoy the walls and the peripheries of the castle. 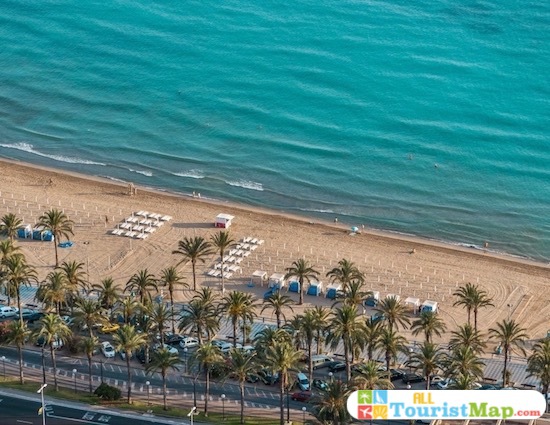 If your preference is sun and sand, this wonderful beach located in the city center, right in front of the Santa Barbara Castle, is your best option, if it is a spa. Its serene waters are adorned with palm trees and a beautiful coastline of fine sand. A beautiful beach that includes a promenade, very popular in postcards and named in several popular songs of the area. It is an ideal environment to enjoy with the children since it has numerous facilities for their fun and distraction. For the enjoyment of the older ones, there is exercise equipment available, and specific areas for beach sports. Safety is guaranteed here, thanks to the lifeguards who constantly monitor it, and it also has the excellent services of the Red Cross at all times, should any problem arise. 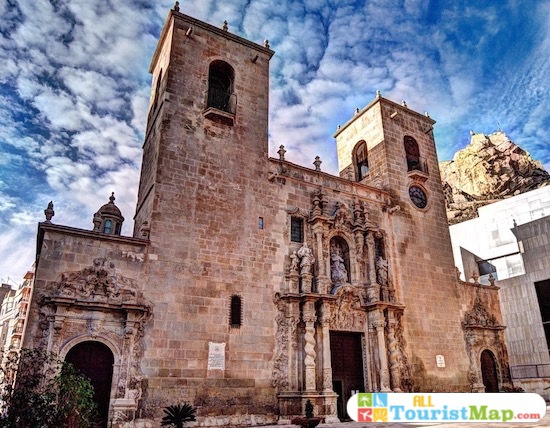 This Gothic work was made of highly porous sandstone from the quarries of the San Julián mountain range. It is located in the old town of Alicante. Its origin dates from the mid-fifteenth century, but over time they added Renaissance and Baroque elements. Its facade shines in a splendid main portico, having the honor of being sculpted by Don Juan Bautista Borja. In the year 2.001, this ancient jewel of Alicante was proclaimed patrimony of the humanity. It has a single nave, surrounded by two towers on its façade. Inside, the High Altar stands out with a Gothic style in its maximum expression. On its walls, you can appreciate a variety of artistic pieces. Outstanding example of this is a 15th century Gothic piece that allegorises Santa Maria and a golden sculpture of the Santos Juanes, made by Rodrigo de Osona. 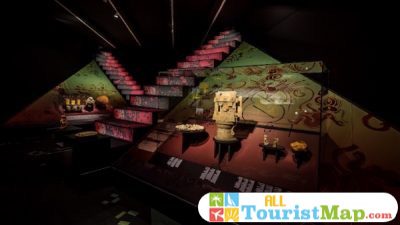 This museum is a place to immerse yourself and dream, and we can find it in the Dr. Gómez Ulla square in Alicante. At the beginning of this building was the old Hospital San Juan de Dios. Its inauguration was in the year 2.000. Throughout the visit, in this archaeological center you will be able to discover from the first stone malleable by the man of the cavernicolous time, to the archaeological rest and that were defining their later evolution. It is considered the best Spanish museum and is one of the European references in the field of archaeology. For its interpretations, the most avant-garde and specialized technology is used, a state-of-the-art museum. It shows the public the objects and vestiges in a didactic way, revealing to the observers what and how they happened. Its more than 81,000 pieces are displayed in 5 permanent exhibition rooms. 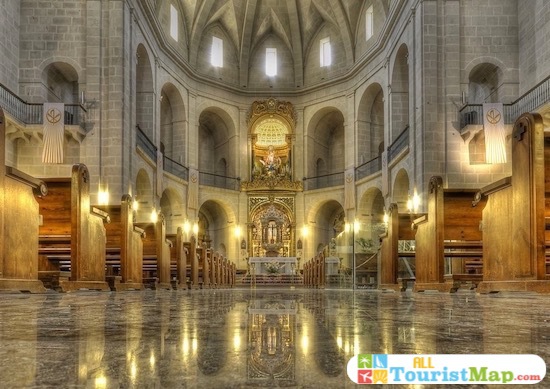 In Abad Penalva square, you can find the co-cathedral of San Nicolás de Bari. This building full of history, is founded on the ruins of what was a temple with a Herrerian Renaissance form, whose construction was carried out between the years 1616 and 1662. It has an old cloister from the 15th century, originally built in Gothic art. This building welcomes you with the exterior sobriety that characterizes it. Inside you will find a slender design by the architect Miguel del Real, whose Roman-style castles adorn this jewel. Along the way you will find an ostentatious artistic variety, including a 16th-century organ, the oldest in Valencia and one of the oldest in Spain. 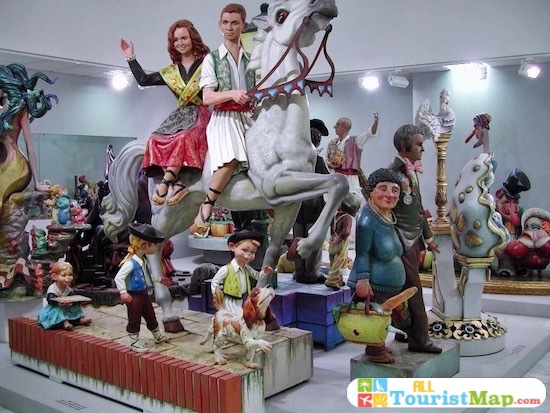 The Fogueres Museum, as it is said in Valencian, is a space where the different evolutionary stages of the San Juan Bonfire Festival are shown, and this translates into the official celebration of Alicante from the 19th to the 24th of June. With the ideas of its founder José Maria Py, the association Alicante Atracción, organizes the “first Hogueras de San Juan” with the authorization of the City Council. Since then, they have been very popular, until they were declared of International Tourist Interest in 1983 and of Intangible Cultural Interest in 2013. The museum seeks to make the visitor contemplate the importance of these festivities and the elements that make them so striking. In its four rooms are preserved graphic gallery, posters, pardoned children, descriptive mosaics and clothing of the festivities. In its audiovisual room you can enjoy the filming of the famous festivities. 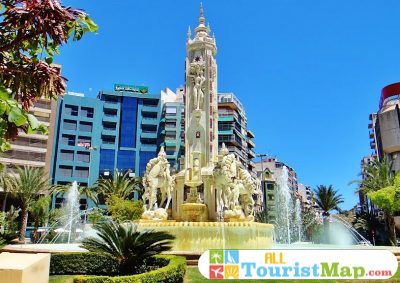 A very lively meeting place at any time of year, it turns out to be one of the most emblematic places in Alicante. It has a monumental fountain, full of surprises and symbolism. Daniel Bañuls Martínez was commissioned to sculpt this marvel in 1930. The stars that give it its name are heavenly bodies distributed around the fountain under multiple figures. They can be seen above the elves, as well as representations of red eight-pointed stars meaning the hesperides. It was once called Plaza de la Independencia and then Plaza Cataluña until 1939, due to a verse of the hymn “cara al sol”, it was later designated as Plaza de los Luceros. In this square, the parade of the Three Kings and the Bonfires parade pass through its adjacencies. Sharing a pleasant sunset with your family and taking pictures of the moment is undoubtedly an excellent option. 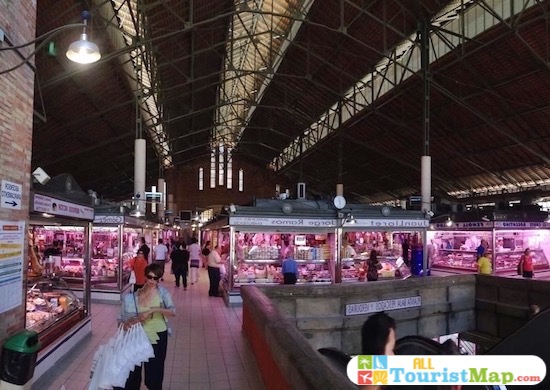 If there is something that is behind Alicante’s gastronomic success, it is the quality of its products from the land and the sea. In its market you will find a wide variety of local fish and seafood products. The local sellers, with their cordial treatment and stories transmitted by generations, will captivate you. After several decades of deterioration, by the beginning of the 1960s, consolidation work began. Today you can enjoy its eclectic style architecture, with decorations of Valencian modernism. The enclosure extends over 11,100 square metres, offering some 229 stalls. You can reach this great market through the underground line or the city bus station. A combination of flavors, textures and colors gives you day by day the central market of the city of Alicante. 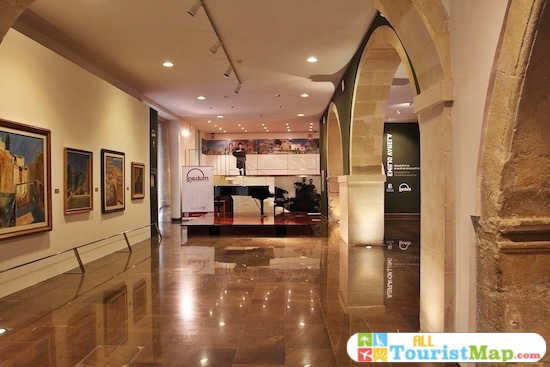 The idea of materializing this museum became a reality in 2001, with the recovery of a splendid 18th century building, the Lumiares Palace. To have in this artistic collection some conditions of conservation adapted to its nature, was fundamental in a project entrusted to the team of architects of the council. The chronological order of the museum allows the visitor to follow the progress of Alicante’s plastic arts from the 16th to the 20th century. The political, cultural and social events and the religious habits of Alicante are taken into account throughout this exhibition. Among the samples, a very valuable painting stands out, The Crucifixion, by Rodrigo Dio Zona. From Nicolás Borrás we can contemplate two paintings to the temple on board, of San Vicente Martir and San Lorenzo. From Cristóbal Llorens, another remarkable painter from Alicante, a beautiful work is kept: San Juan with San José with the child.

Map of hotels in Alicante

In alicante, the colours of the geraniums and the staggered paths of their beautiful houses in the neighbourhood of Santa Cruz merge. Right in the historical center, it turns out to be an excellent place to remain a while to contemplate them. Apart from the rich atmosphere there, numerous historical baroque buildings are waiting to be discovered by you. In our Alicante hotel map we have a lot of recommendations to choose from. But if you are convinced by the idea of staying in the historical centre, we recommend the Les Monges Palace hostel. And don’t be fooled by its size, it is highly rated by those who have enjoyed its excellent services. It is very striking for its rustic elements, and you can find it in Calle Monjas with San Agustín in the middle of the central area.

Video of the most impressive tourist sites in Alicante