The red of its bricks in most of its buildings more than compensates for the absence of architectural monuments that any French city would boast. It is a visual spectacle and home to a vast population, practically young, since Toulouse is a university town. Of course its streets and avenues are full of that coolness, and the joviality of its nights. Home to pilots and the headquarters of aeronautical companies, the university, technology, renaissance and religious festivities set the tone. This city is the birthplace of Carlos Gardel and it presents several environments to choose from and let oneself be carried away by the tourist trend that fills its bars, restaurants and cafés year after year. Apart from the above, we invite you to witness beautiful sunsets on the banks of the Garonne River; it will be a pleasure to accompany you on this tour through this tourist map of Toulouse. It is definitely a city to get lost in with good company.

This important university city is home to nearly 100,000 students, representing a significant number for a city where more than 400 thousand people live. It has a warm climate, marked by oceanic winds that make its summers the ideal time to thaw out the northern cold; even its spring and autumn mark mild temperatures. Toulouse does not forget its past; in its museums you can find traces of those Roman conquests that took place in 120 B.C. History is not limited to this, the Visigoths, Franks and the independence scenes did their part in this city. Today, aeronautical development and technological innovation mark the development of a young city that ranks third as a university community in all of France. Its heritage is made up of groups of buildings that are preserved in the inner boulevard, the old part of the city. 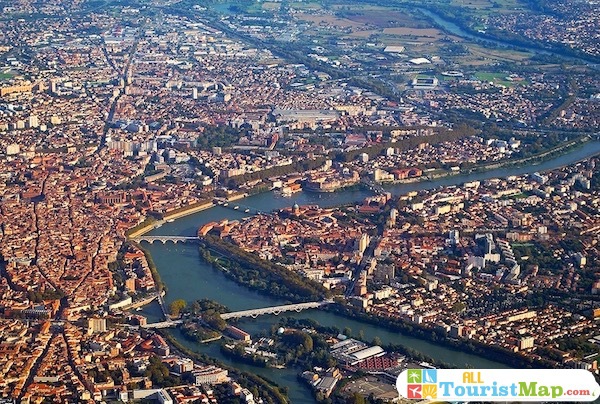 In this order we can mention beautiful squares, garden areas and a large number of Renaissance buildings. On the other hand, the modern part of the city has the greatest variety of places for leisure, rest and gastronomic tasting with modern theatres, galleries, shops and restaurants that respond to new concepts. Among its current offerings is the Ciudad Espacial, the Augustinian Museum, which houses sculptures and canvases from the medieval era. Roman art expands with the splendour of its Basilica of San Sernín, the most important in its style. Toulouse is also renowned for its festivals, especially the Violet Festival, held at the beginning of the year. Various floral exhibitions together with thematic events fill the city for two days with tourists in search of the creative and colourful atmosphere that it represents.

The city lends itself to many festivals, the calendar of which you can obtain from the Toulouse tourist office. We are trying to say that with its permanent attraction and the one that is lived in its events you will have the happiness of choosing what time of the year to visit; and as we mentioned about its climate, the excuses are reduced. Walking, searching for its treasures, tasting and shopping is the day to day life that is breathed by its inhabitants and visitors. This Toulouse tourist guide puts you in tune with that dynamism through our routes, taking as points those essential places to stop and witness everything we review. If you like photography, here you will have the best backgrounds, especially at dawn or dusk. And if you want to go along the Canal del Garona we also show you what to do and how to get there.

What to visit in Toulouse 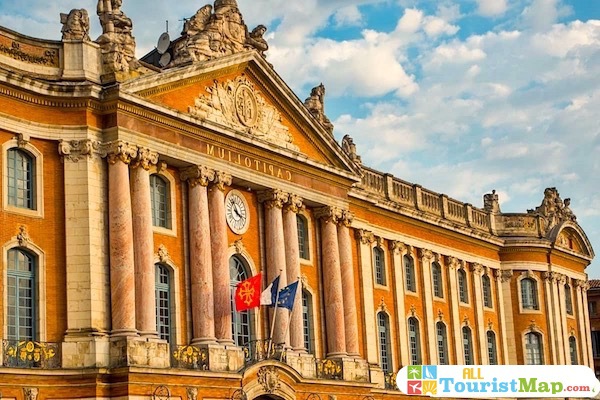 Its structure is composed by 8 main columns that symbolize the 8 rulers who took the reins of the city at that time, although its facade belongs to the eighteenth century, this architectural work marks a perfect harmony of elements from different periods and currently carries out the political activities of the city as it was conceived. Its interior is appealable and in its courtyard you can with a tour guide recall those important events of the seventeenth century as was the execution of the Duke of Monterrey or the martyrdom of Jean Calas in the eighteenth century. In a tour of its interior you will come across its Henri IV courtyard, which houses several busts and commemorative plaques. In addition, its different rooms are magnificent spaces that exhibit works of local artists of the nineteenth and twentieth centuries. It is currently home to the National Orchestra and Theatre. 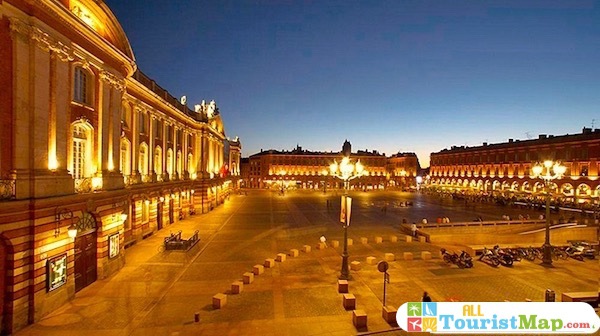 This square is located in a lively atmosphere, where you can walk around the stalls of a vibrant market, as well as rugby matches and wedding parties held at the Capitol. It covers an area of 12,000 square meters and is encrusted with the Cross of Occitania. The curiosity at this point in the heart of the city increases when you walk around and admire the facades of the surrounding buildings. The characteristic color of its bricks is a symbol of the city, for something they call it the ville rose, the capitol provides a visual spectacle in its walls with the rays of the rising sun, in its facade of izan three flags in tribute to the original culture of the region, being the flaming flags French, European and Occitan. This focal point directs visitors to walk through the centre to shopping streets filled with exclusive shops and warehouses.

This treasure forms part of the most extensive centres of Christianity in Western culture, and at the same time connects with the French route to Santiago de Compostela. Its external design as well as the details that are kept inside its main nave are catalogued as heritage by UNESCO. It is a tribute to San Sernín and its elements from different centuries are authentic relics of Romanesque art. Its crypt is open to the public and holds the remains of this Saint and the treasures that witnessed those glorious moments. Its large dimensions are designed for the pilgrimage of large numbers of believers and as a Christian temple its elements are enclosed in a cross plan, giving capacity to five naves that direct attention inside to a temple where the altar is made of fine wood and marble.

It is a thematic site to learn about the origins and phenomena that occur in outer space. Toulouse is known as an advanced aerospace city. And what better than to have an ideal site like this one in the outskirts, to appreciate closely the technology involved with the history of the conquest of man in space through the designs of modules and ships in their original sizes. The attractions of this place are varied, for example the Terradome; it is a recreation of the bigbang up to the formation of galaxies, through a 25 meters dome. Explore the space through shows in its giant screen planetarium with about 280 seats. This site is ideal for taking children and interacting with the cockpit simulators of popular space race ships and space stations.

Museum of the Augustinians 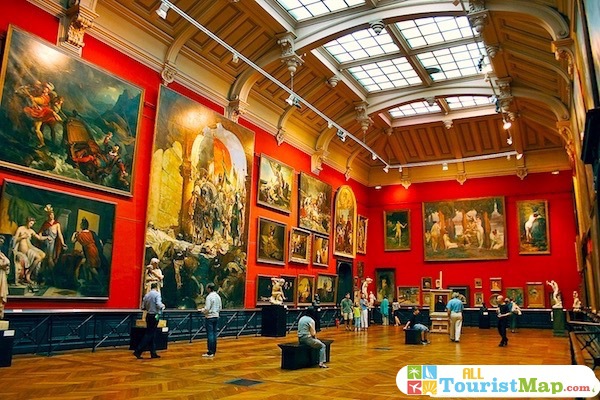 This museum includes a rich collection of Romanesque and medieval art, and artistic movements that have succeeded it up to the present day. Since the French Revolution all the contents of this museum were taken to the convent of the Augustinians. Here, important Gothic sculptures stand out, such as the capital of Nostre-Dame-de-grasse. The cloister of the monastery adds beauty thanks to the 14th century Gothic influence and the gargoyles that adorn it. Its exhibition is based on a collection of works of great importance throughout Europe. With around 4,000 pieces, it manages to cover the origins of the Middle Ages until the beginning of the 19th century. In the face of such architectural beauty, works by artists such as Corot, Champaigne, Delacroix and Nicolas Tournier are displayed.

Walks with a special company as well as escape to the urban are given in this exotic space. This place is ideal for meditation and rest; it is a faithful recreation of the exquisite gardens of Kyoto, recreating the scenes of Japan from the 14th to the 16th century. It combines elements of green, water and Japanese stone, synthesizing a different botanical scenario within the Compans Caffarelli Garden. One of the ideal places to see is the tea pavilion; various aromatic species and others breathe in the relaxing air of the land of the rising sun with their fragrance. Another element of appreciation is the Zen-style stone decoration, very peculiar in this type of garden. Visits to this garden are permitted every day from 7:75 a.m. to 6:00 p.m.

A place where the aeronautical theme is composed of merely interactive and playful elements makes Toulouse a respectable city in terms of its technological development in air transport. Its area of about 7000 square meters exhibits models of fuselages and airplanes that marked the aviation industry. Models like the Concorde, the Airbus A300B are one of the devices that can be explored from its interiors. If you are passionate about aviation there is the possibility to interact with aerodynamic elements and recreate a customized version of these devices.  The story taught here begins in the early days when man made his first attempts to fly through extensions and vehicles. All this wonderful world can be enjoyed through visual guides that help the viewer relate to these elements that impacted modern man. 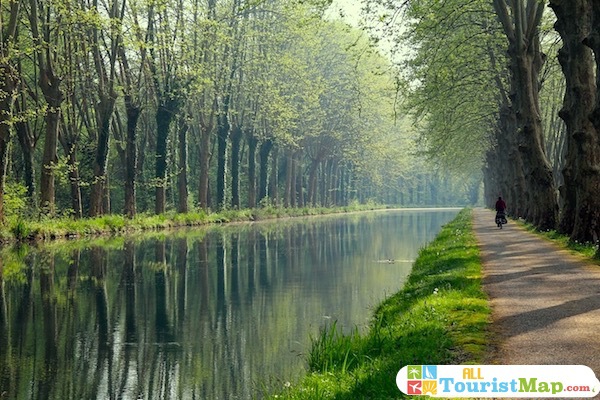 This channel is ideal for canoe trips. It connects Toulouse with the city of Sète and its tributary is part of the Canal du Midi. Together with the Canal de Garonne it is a UNESCO heritage site and a must see in the city. A variety of landscapes are the magnet for water-travel lovers. Throughout its route you can appreciate the unique slope of Montech, as well as the crossing through the Cacor bridge and the Saint-Jacces, both in Mossiac, where you can make an arrival in it and let yourself be carried away by the charm of its places. In addition, the view is complemented by the countryside where you can appreciate grape, peach and apple plantations. 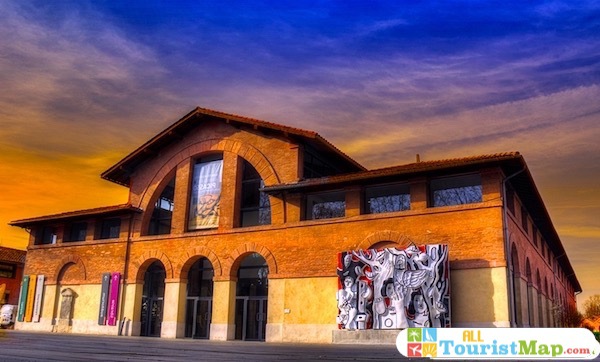 It is a museum that encompasses innovative art from the beginning of the 20th century to the present day. The European contemporary art is made space between its 1,600 square meters contained in more than 4,000 pieces of exhibition. What used to be the Toulouse slaughterhouse is now a charming museum open to the public. You can also enjoy concerts and artistic performances, as well as film forums that enliven the contemporary culture of the city. Inside this rustic building there are works by Pablo Picasso and Daniel Cordier. There is also a reading area where you can find information about the history of the city and collect catalogues of important temporary exhibitions that have given relevance to this place.

Map of hotels in Toulouse

The city has very good intercommunication routes, which facilitate access to its tourist sites. Although many people make the historical center the strategic place for accommodation because they prefer to have everything at hand. And it is true that this point is a very good starting point that simplifies even more any tourist circuit and route within the city, especially if you come with children to teach them the attractions in terms of aeronautics. That is why we recommend Hotel Mercure Toulouse Centre Wilson Capitole, where you will have the Capitol Square a few steps away, as well as the Basilica of San Sernín. But if you are one of those who want to have an evening with that special person in this captivating city, we leave this map of hotels in Toulouse for you to put all the possible options at your disposal.

Video of the most impressive tourist sites in Toulouse