A visit to Montpellier on this holiday leads to a wonderful urban complex comprising beautifully designed buildings interspersed with authentic heritage that speak of a city more than a millennium old. Visit each tourist destination with our Montpellier tourist map, which includes a large number of routes that will show you its medieval alleys. Its latent commercial activity with a variety of traditional merchandise under the protection of its own Arc de Triomphe. This city that has been emerging lately, has been scoring next to its historic center the best options, rooted in neighborhoods and centers for entertainment. Thanks to the river Lez this city invites to a relaxing canoe ride and enjoy the greenery of its protected areas, where the fauna and flora make the stay, a pleasant opportunity to live the simplicity and beauty that characterizes it.

In the south of France and close to the Mediterranean, Montpellier is consolidating itself as a tourist destination. With a large number of historical sites it is difficult to get bored walking around the city for a whole day, otherwise you would not enjoy a high influx of visitors. Its history originates in the first century, born as a response to constant attacks by corsairs on the ancient city of Magalona. It passed through different Spanish domains, as a stately land, to be sold to the French monarchy in the 13th century. By that same time, Montpellier had already shown rapid growth with the creation of its university in 289 and its cathedral in 1536. Today, Montpellier enjoys an accelerated pace, a product of its industrial culture that had its heyday in the middle of the 19th century. 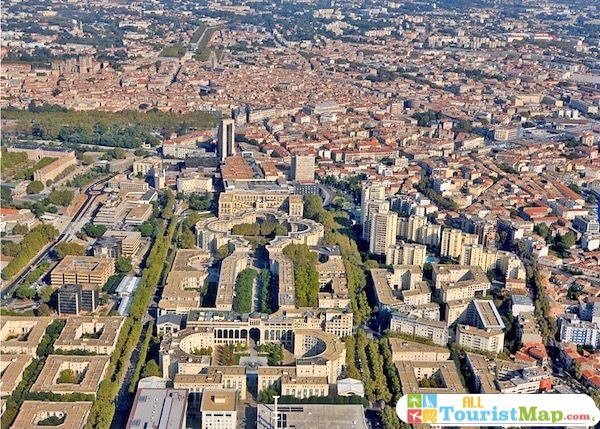 Thanks to immigration, it has become one of the most populated cities in France with 277,000 inhabitants, a high density for only 56,000 square kilometers. Thanks to the importance it acquired in the commercial sphere in the 10th century, its network of streets made of stone witnessed the rise of beautiful squares and, although it does not have a relevant monument, it is enough to take a look at its representative fountains and architectural jewels around them. Its museums, such as the Fabre, also bear witness to the city’s medieval past. Montpellier has its own triumphal arch whose façade illustrates important events of the French monarchy. The plant garden and the zoo of Montpellier are excellent options if you prefer to have contact with nature and vary among so many wonders of its beautiful urbanism.

Montpellier enjoys a lively street activity; especially because of the cultural network that has allowed it to develop important artistic events in the city. Beautiful choreographic sceneries that move year after year in each of its neighborhoods, giving the city a privileged place among the most essential tourist destinations to visit. We invite you to get away one of these summers to coincide with this magic, and to mark routes with this Montpellier tourist guide. With our help you will know in detail each point of the route without any loss. In addition to the routes that connect with each of its seats, so you can easily stumble on the charming sites that we have been talking about and that we will expand in our section of tourist sites.

What to see in Montpellier 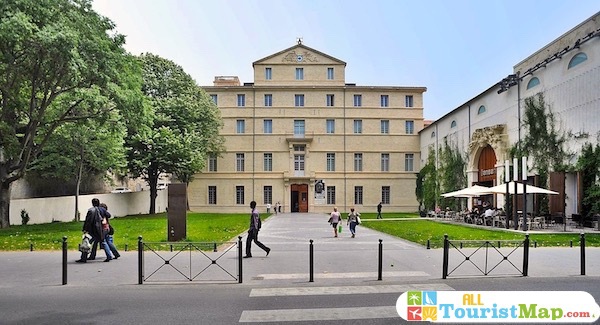 It is the ideal place, one of the most outstanding in the city, where you can see the conjunction of modernity and the Middle Ages. It is located in the heart of the historical centre, near the Palacio de la Comedia. It houses paintings of the finest artistic works from the medieval period, sculptures from various periods and modern conceptual art. It has an exhibition of almost 5000 pictorial, sculptural and miscellaneous elements, among which are works by Dlacroix, Pajou, Bazille, Soulages or Houdon. From medieval art to the industrial era, you will be able to appreciate the beauty represented by the traces of that bourgeois society through everyday objects made of precious metals, such as crockery, furniture and ceramic ornaments. The fine arts organized through the stages that marked the growth of this city make this museum one of the most important in Europe. 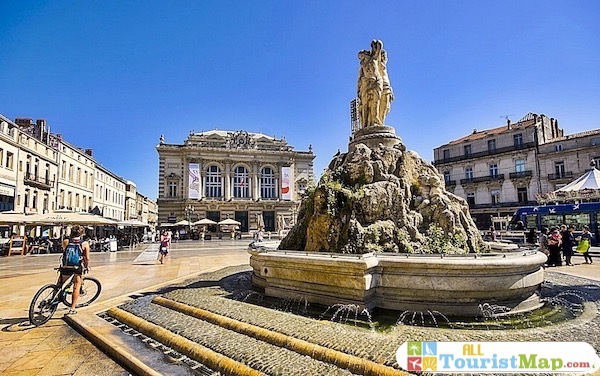 Because of its ovoid shape it has earned the nickname of the egg square. It is a favourite stage for urban artists who fill it with joy and expression through their talents. Its terraces and gastronomic establishments always have their stands full of visitors as the atmosphere and the sun give it a pleasant spot for leisure and sharing. There you can see the fountain of the Three Graces symbolizing these deities as icons of Montpellier. This square is the ideal place to start your tour of the city and to admire the finest stalls. For more than two centuries this square has been an emblematic point of the city. Its surroundings fortunately preserve facades of buildings dating from the 19th century. In the evenings the bistros and open points are an excellent option for socializing and having a good chat with a drink in hand. 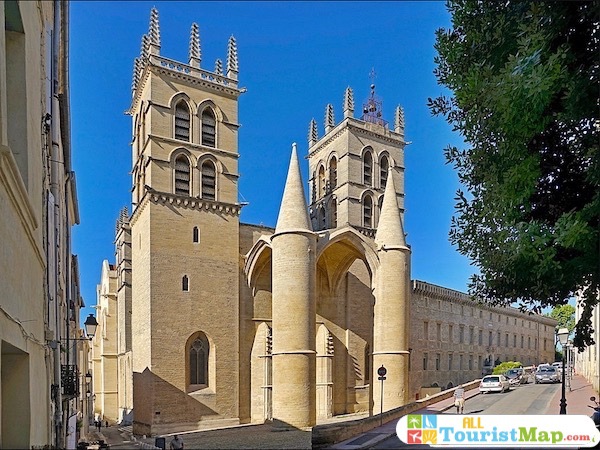 What used to be a monastery chapel dedicated to San Benito, today the southern gothic makes this cathedral an interesting work of the 14th century. It was founded in 1364 by His Holiness Urban V and was consecrated in 1933. Its strange front draws attention because of its two sturdy pillars that support the porch. As you enter you can see just to your right the choir made in the 19th century. Although the natural light does not help much in its interior, the pleasant details make it charming; this is if we mention that its main altar is made of onyx stone, or the unique sounds of its organs and the colors that sparkle in its stained glass windows representing the apostles and prophets. 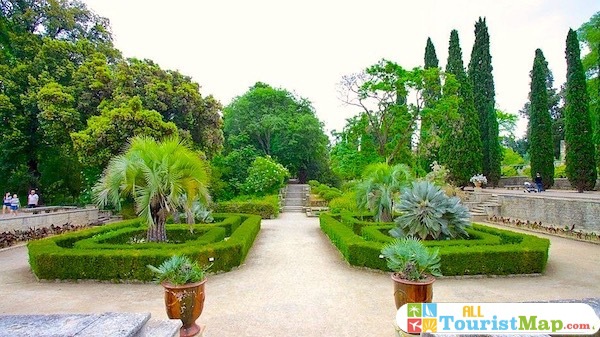 Equipped with greenhouses of different species from various latitudes and spread over more than 4 hectares, Montpellier boasts the oldest and one of the most important botanical gardens in the country. Its collections are a combination of plants from arid climates, especially from the Mediterranean and other tropical regions, as well as from the temperate zones of Northern Europe, Asia and America. It has an interpretation area, or rather, a study center that is responsible for systematizing and classifying around 3,000 types of plants. It is part of the University of Montpellier, Faculty of Medicine, and belongs to the category of the monuments of France. It is open every day except Mondays and is free of charge. You can take a walk dedicated to meditation in its bamboo forest and its lake.

Among the natural sites to visit, the Montpellier Zoo is the second largest in the country, and of course the largest natural area in the city. In fact, 11 kilometers is enough for the visit to take a good time with the children. There are numerous and varied species that make life in this enclosure; 400 specimens among birds, mammals and reptiles coming from all over the world spread in an area of 80 hectares. Entrance is free and visitors have the opportunity to see rhinos, bears, lemurs, lions, cheetahs, wild giraffe dogs, and many more. Likewise, the most exotic fauna and flora of the Amazon are among the most preferred spots.  Access is free, every day at 10 am; depending on the season it closes at 6 or 6 pm. 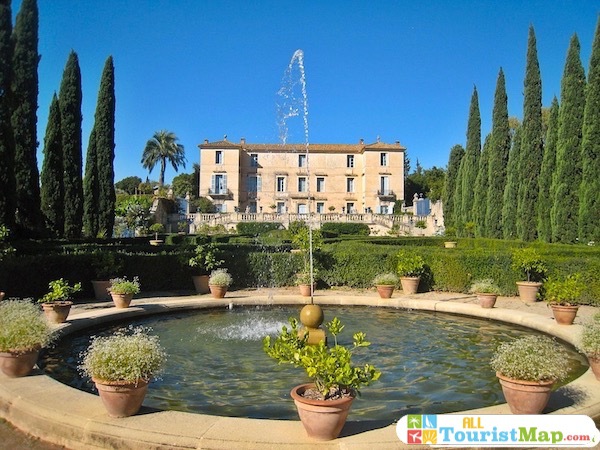 It is a beautiful 17th century castle that is still inhabited, but is accessible to the public. Inside, the visitor can appreciate a rich collection of ceramics, paintings, the decorations of its halls and corridors, as well as a library. The palace is provided with a garden that adds more importance to the site. Upon arrival you will have to pay 9 euros and you will have an internal guide for all its rooms. You can even access a winery with excellent local wine, or visit its vineyard and watch the harvesting process. But if you prefer, you can choose to discard the guide or simplify the visit in some interesting place, so the entrance will have a different price. This palace is open Monday to Friday from 9:30 am to 6:00 pm, and Saturdays it closes at 2:30 pm.

Museum and Conservatory of Anatomy 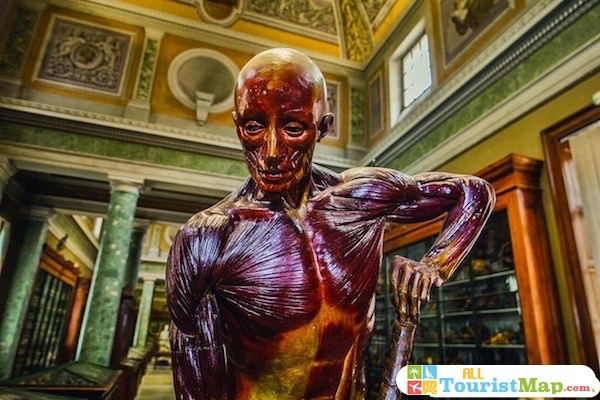 A place suitable for the curious, enthusiasts of medicine and the human body. Since the 12th century, this museum has been an important institute for the study of human anatomy and the exploration of medicine. You only have to look through its entrance the portraits of the many personalities who stepped on this center through the centuries, you will be clear about the prominence of this place and the contribution to science. All the information as well as what has been explained in detail is told by its guides, who as good hosts will make every corner make sense. Its instrumentation and body parts make curiosity the aim of this site. Characters like Nostradamus and Rabelais passed through this academy during their training. This site is many centuries of history that awakens emotions and amazement even to the most incredulous. 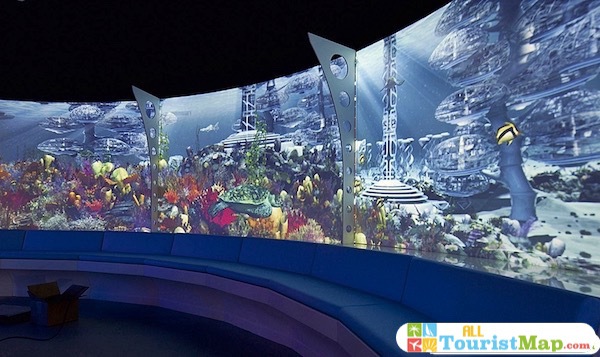 The underwater world is full of wonderful secrets, creatures, flora. Different ecosystems have always been man’s fascination with having almost direct contact. The Mare Nostrum is the aquarium that Montpellier has given the city more than just a tourist attraction; it is a place for meeting and learning about aquatic life. Nearly 3,000 specimens of 300 different species come to life in 24 pools that are conditioned to each climate and latitude. Exotic species of fish, fill with colors and forms the views of the visitors. The life forms are so varied that even penguins come to life in this place. With only 15 euros you can enter and enjoy all this. If you come with children the entrance fee varies to 10,5 euros, children under 5 years old do not pay. 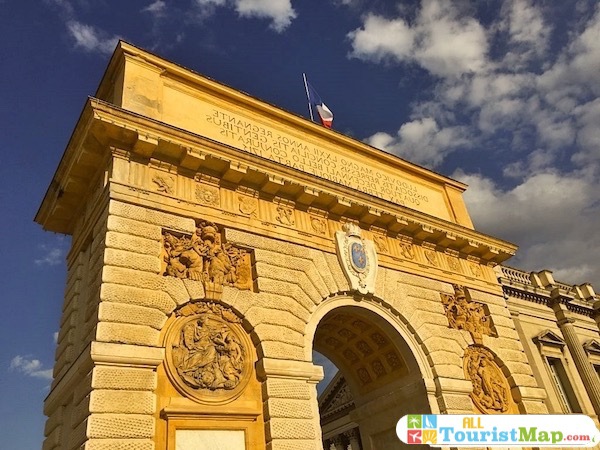 It’s just his own bow of triumph. A medieval city like Montpellier could not be without such a monument. This monument was built in 1693 and was part of one of the main entrances of the old walled city.  Because of its shape, it is presumed that the Arc de Triomphe had something to do with the stylistic inspiration of this arch. Located in the homonymous garden, it pays homage to the figure of Louis XIV and the most important moments of his government. The design of the arch tends towards the classical Doric, a characteristic style in the monuments of that period. Important buildings and places in the surrounding area are located under this arch, such as the Palace of Justice, the Peyrou Park, the Saint Pierre Cathedral and the San Clemente Aqueduct. So at this point you can program a route integrating these tourist charms.

Map of hotels in Montpellier

Montpellier is home to one of the oldest universities in France. Over the centuries the young population has set the tone, and especially in recent times this vibe has given the city a favourite place to visit and have a good time. Beyond its tourist charms, there are plenty of places to clear your head and kill time; there are plenty of excuses for staying here, which is why it’s not surprising that this city has a great range of hotels. It’s up to you to choose your favorite neighborhood or spot within the city to stay; to make things easier for you explore this map of hotels in Montpellier, you’re sure to find just what you’re looking for. Hotel Oceania Le Métropole Montpellier is just a few steps from the Place de la Comédie. In the heart of Rue du Clos René, it awaits you with comfortable rooms and free breakfast.

Video of the most impressive places in Montpellier