France’s firstborn city, almost 2,500 years old. It has been the gateway to Europe. With its port, which is currently the third most important one, it has one of the liveliest environments in the French scene, with the best entertainment offer, beautiful crystal-clear beaches, a wide cultural variety and the modernity that this growing city has allowed to be a favorite destination in European tourism. The tour of this city is a real enjoyment of the exotic, along with the stately architecture, all the colorful mixture on the banks of the Mediterranean that Marseille tourist map brings in this article. Besides, a sunny walk along its docks is worth waiting for the night to soak up the nightlife there. It would also be an excellent opportunity to taste the marine gastronomy having as a standard its famous dish, the bouillabaisse.

After Paris, this city has the largest population in France, with 1.6 million people. As a good French city its heritage reduces it in an extension of 240 square kilometers. Its port of relevance in the Mediterranean is equal to Rotterdam and Antwerp, and that represents the neuralgic center, where the naval activity and of hydrocarbons has marked a communication knot between Spain Italy and Switzerland. In the same way we can emphasize the cultural and historical legacy that so much calls the attention of the visitors, involving his port with the principal routes of the city that direct the attention towards beautiful squares, cafeterias and commercial places. At the top of the city stands the beautiful Cathedral of Marseille, a tourist site that symbolizes the most attractive of the town. 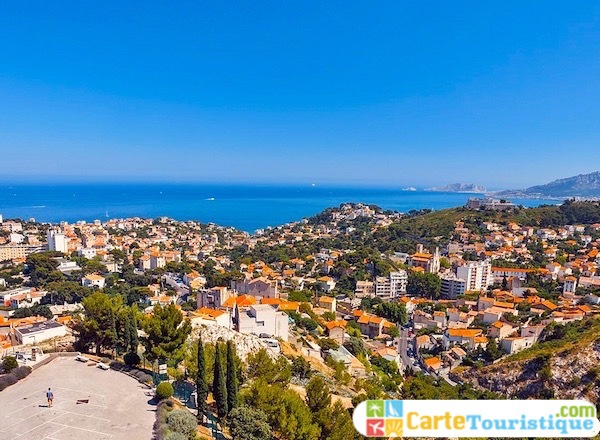 The visitor’s curiosity explodes when admiring the content of its buildings, the Museum of Fine Arts and the Museum of European and Mediterranean Civilizations, with an extensive exhibition of artistic and ethnographic signs that have marked the city since the beginning of man. Its monuments embellish the city with the characteristic medieval golden past, such as the Longchamp Palace and the Pharo Palace. If you want to take a walk through the fortified history, the Ir castles, Fort St. Jean and the Castle of Borely, in addition to their imposing structures, house museums that collect evidence of civil history from time immemorial. If you want something different you will always have nature as an ally for escape, do a little trekking in the Calanques National Park; you will have a lot to do with its rocky formations and beautiful coves as well as slopes for trekking.

In addition to the options on the mainland, this city has a beautiful archipelago with picturesque villages where you can live an experience on a smaller scale but which has a very lively tourist activity with its beautiful houses and shops, as well as beautiful natural scenery that brings together nautical events and excursions. All these attractions, as well as those of the city itself, can be seen in the tour we invite you to take with our Marseille tourist guide, where we point out each of these places to visit, as well as the points that connect them so that you have a route devised before you pack your bags and decide to spend as much time as you like in person.

What to see in Marseille 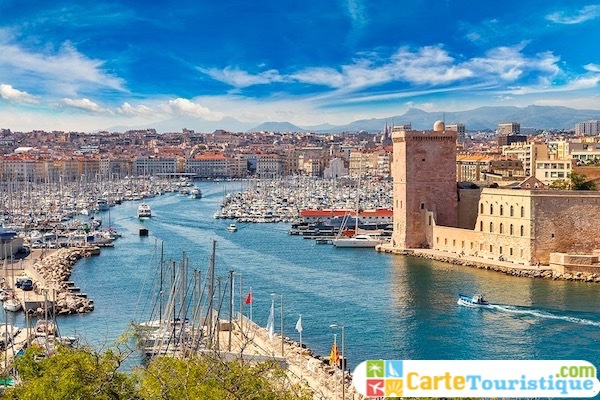 The port of Marseille is over 2,500 years old, but its expansion and predominance was marked by the centuries to come, giving the Mediterranean Sea a strategic point for trade and adding defensive constructions such as the Fort of Saint Nicholas and the Fort of Saint Jean. Due to its historical relevance and strategic location it continues to have commercial and communication importance. Nowadays it represents the main heritage of the city. The scenery that is lived there is composed by the beautiful marine color and great amount of ships that represent the daily life of this port city. The nightlife in this place is the liveliest in the city. The tour across the entire port due to its extension requires dedication and time so put on some light shoes and get ready to see several resting points, tasting points and street vendors through it. 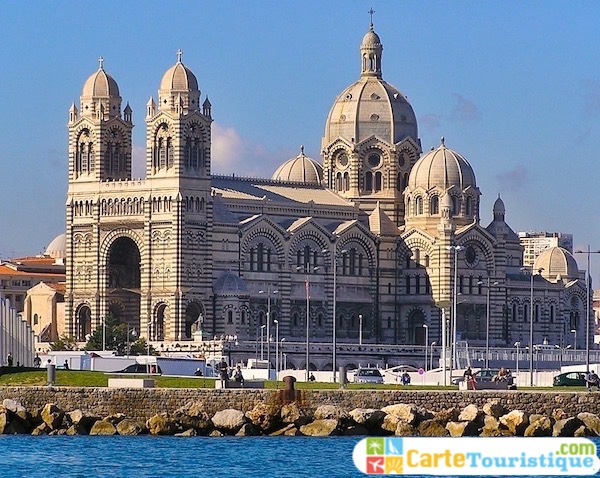 Between the old and the new port of the city, this cathedral is located as a monumental complex in the heart of the historical centre, near the San Jean Castle. This cathedral is located on the same site as old Paleochristian temples, among others of great importance as the original church Santa Maria la Mayor. Its construction in the 19th century was promoted by Napoleon Bonaparte who laid the foundation stone. Its totally original style is lost among the influence of the Byzantine with the eclectic art of sumptuous proportions. It has a cross-shaped floor plan and because of its dimensions is comparable to major works such as St. Peter’s Basilica in Rome, with the particular style that allows it to be a must-see monument for tourism in Marseille. Its façade is an artistic jewel that tells scenes of Jesus Christ and his apostles in an in its Romanesque details. 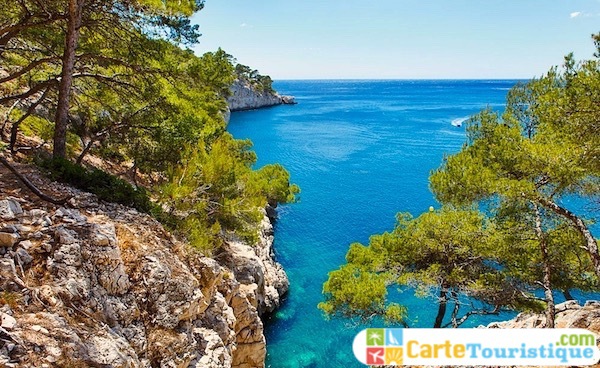 Its extension is such that it links Marseilles to Cassis. Only 8,500 of land and no less than 42,000 hectares of marine ecosystem to take a good look at its more than two hundred species of animals from both ecosystems that live together under the protection of the administration of this park. It is unique in its style in all of Europe since it involves semi-urbanized places both by sea and by land. The main attractions of the park are its coves; with an unparalleled blue colour, there are five of them that attract tourists, ideal for kayaking and contact with marine species. Also in this same scenario there is a considerable amount of islands and a submarine canyon. On land, hiking is possible in the calanques that delimit its rocky formations in the middle of the coast. Along the walk you can see the castle of If.

Although this archipelago is located in Port Frioul it belongs to the city of Marseille. The same archipelago that is composed of a group of 4 islands. It is bordered by small coves that can be reached on foot. There are also numerous beaches where tourists can enjoy a relaxing bath in its warm waters and enjoy the exotic flora that lives there. It is located only 4 kilometers from the city and has a total area of about 200 hectares. To access you can take a boat from the old port and takes just half an hour to the port of Ratonneau to choose between diving, or renting kayaks or motor barges. We recommend the beaches of the main island where the beaches are more beautiful. There you can find an aquaculture farm, another attraction of the area. 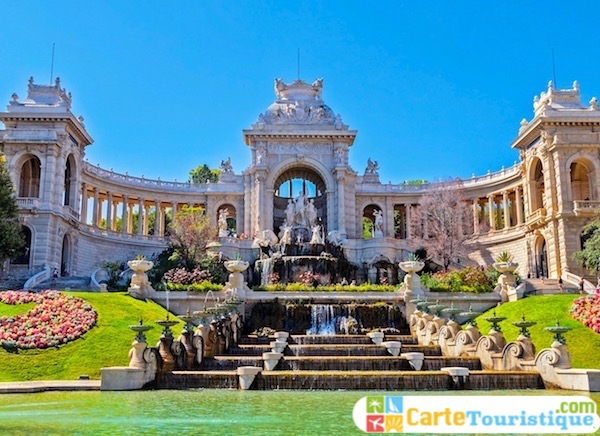 The need to supply the city with water was a very necessary idea of medieval France. But it was not until the 19th century that work began on it; when the lack of this service exceeded the tolerance limits of a France plagued by endemic diseases. An arduous work such as the 85-kilometre canal, supported by almost twenty bridges carrying water, made it worthy of a monument in his honour. This homage is represented in the details of its façade; the representation of tigers and lions was in charge of the chisel of the artist Jules Cavelier. The enclosure is an entire 19th-century palace and inside it is currently the Marseille Museum of Fine Arts, as well as the Museum of Natural History and a botanical garden. 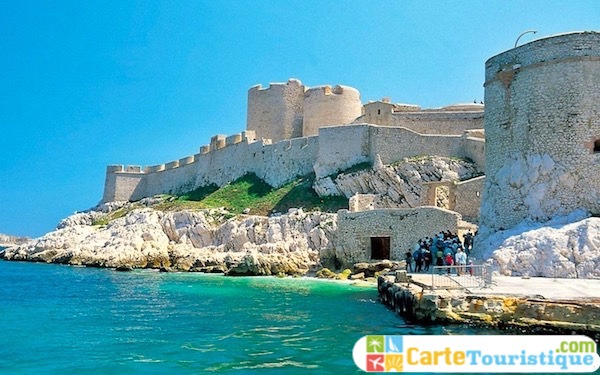 If you’ve read the Count of Monte Cristo’s novel, then this castle will be familiar to you. Located on one of the islands in the Frioul archipelago, it was built in the 16th century by Francis I. It is mentioned in the works of Alexander Dumas and has become one of the most popular tourist sites in France. It mainly served as a watchtower and defense thanks to its towers, but because of its location it ended up becoming a European gannet. Apart from the Count of Monte Cristo who represents the most relevant enigma, it can be stated about other important prisoners who ended up here for crimes of treason; together with them their history and legends.  From Puerto Viejo there are boats that take visitors on a 25-minute journey. The route is decorated with the fantastic natural landscape of marine life and the coasts. 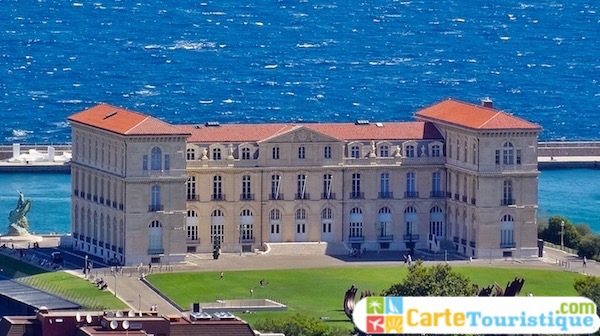 This site, which currently hosts important events and conferences, was planned by Napoleon III in the 19th century. At the time it arose as a need to respond to the growing development and modernization of society and the city. Today it is part of the monumental complex of Marseille shortly after it became a hospital for cholera and tuberculosis patients. Its structure, with two large spaces on the sides, as well as shell sculptures, resembles the shape of a spa, rather than a palace. The classical influence on its architecture is presented by the use of stone.  Its facade, as well as the interior elements were created by the artists Gilbert, Simon and Vittoz. Its garden known as Emile Duclaux occupies 7 hectares of the surrounding land. 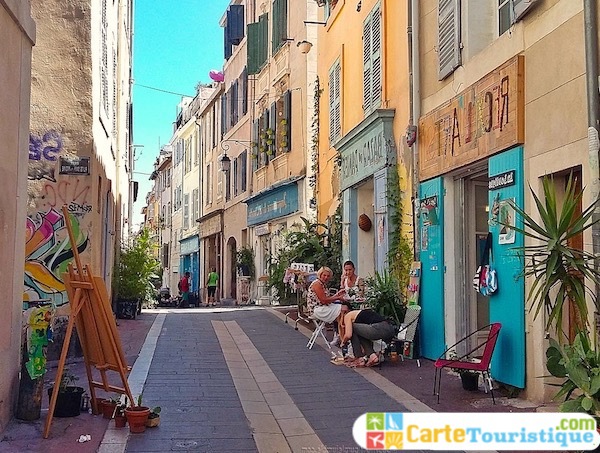 Diverse cultures and a lively life is what defines the oldest district of Marseille. Venture into the port and historical spirit of Marseille through its many streets. You can start your tour of the Old Port up a slight slope of the hill in which this neighborhood is located, until you reach its highest point; there where a Greek square from the 3rd century BC used to be. Its picturesque houses in antiquity were occupied by fishermen’s guilds. In some places you will find places like the Diamond House, the Hotêl Daviel or the Vieille Charité. Both day and night the activity of this neighborhood is in On mode. One of the places you can’t miss are the craft shops, bars, cafés, restaurants and terraces. 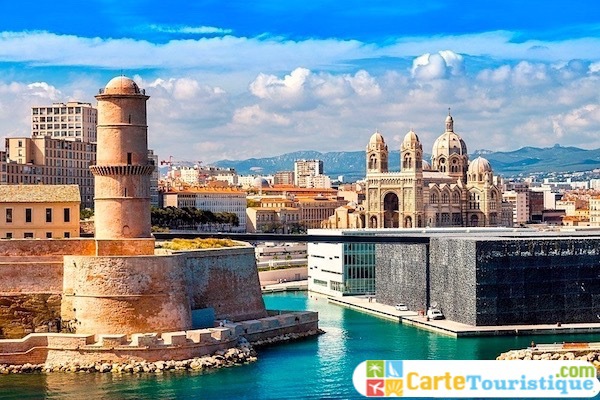 This fort has been the eye embedded in the opening of the city’s port, facing the Mediterranean. Faithful witness of the events that caused changes in the city throughout its history since the 12th century. Its towers were additions to reinforce the city from attacks by the Aragonese in the 15th century; one of them was due to the desire of the merchants to have a watchtower that could see the ships approaching from just 20 kilometres from the horizon. A moat that surrounds the castle is part of the defensive system in case it is isolated from the city. In addition to the intense activity it sustained during the medieval period in the centuries to come, it gave no rest; it served as a prison during the French Revolution and in the Second World War as an arsenal for the Wehrmacht.

Map of hotels in Marseille

In Marseille you will have plenty of options for accommodation. You can choose in the city from the Old Port, its historical centre to the liveliest neighbourhoods, it all depends on the atmosphere you prefer. Even on your journey through the Frioul Archipelago there are hotels and canes that provide you with a paradisiacal experience. For the more eccentric tastes the very same If Castle offers the opportunity to stay in a luxury hotel; all this can be seen on our map of hotels in Marseille, where the location and reviews of each hotel are just a click away. Use the Grand Tonic Hotel Marseille as a recommendation, where elegance is combined with the wonderful views of the Old Port. Close to the metro station. Its elegant rooms have WiFi service, satellite TV, minibar and offer a buffet breakfast on its terrace.

Video of the most impressive places in Marseille