If there is one wonderful distinction that Denmark has received it is that of being the happiest country in the world. Yet there are those who think that Denmark has little to offer beyond a predictable nature. However, reality belies those myths. Denmark is a fun, happy country with a wild and beautiful nature with incredible and majestic landscapes. A country filled with a vast historical legacy with a happy and satisfied population. In addition to this, it has exquisite architecture, delicious gastronomy and pleasant cities in which tradition and modernity are perfectly mixed.

Denmark occupies a peninsula in Scandinavia, northern Europe. Being a peninsula, which is called Jutland, the whole territory is surrounded by the waters of the North Sea and the Baltic Sea, except for the south which borders Germany, its only connection with the mainland, in fact, is one of the longest coasts in Europe. The country is home to some 1419 islands that lie around it, of which only 443 are named, as well as a number of islets. The three largest islands are Zealand, the North Island of Jutland and Fyn. Also belonging to Denmark are the Faroe Islands, an archipelago located in the north Atlantic near Norway, and Greenland, northeast of North America, very close to Canada. 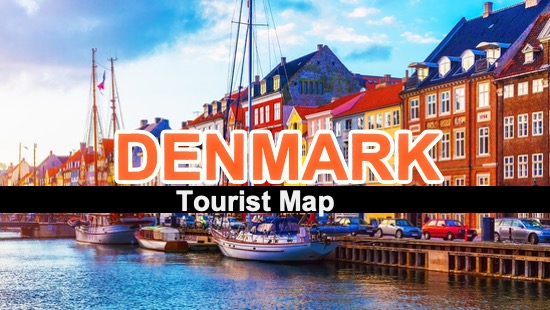 The main zone, that is, the peninsular country, has beautiful fertile and cultivable lands, sandy coasts of low altitude which allows it to have a temperate climate. This means that the winters are comparatively mild, the average is 0º C, and in summer it is around 16º C, that is, quite cool. Of course, there are regional differences, and even more if you add the Faroe Islands and Greenland, so the rainfall, the amount of annual sunshine and the temperatures vary as well. The capital city is Copenhagen, which has beautiful tourist sites and a number of interesting attractions for visitors. It is also easy to visit thanks to its efficient public transport system, which allows you to combine various means of transport such as buses, underground and trains with a single ticket. It is also “cicloamigable”, for those bicycle fans.

One of Denmark’s greatest natural curiosities is its biodiversity, especially in flora, which is rare in a small country. This is a country of pine forests and other trees that change with the seasons. In some places there are many small lakes. The landscape is generally flat with plains, cliffs and dunes. The landscape varies in different parts of the country: eastern Denmark has a varied terrain. For example, Bornholm has a special landscape with mountains of earth. The landscape of West Jutland consists of farmland, plantations and narrow meadows. North Jutland has sandy coasts with large fjords and flat areas.

The country has two natural areas in its territory, which are considered unique in the world and therefore are on the UNESCO World Heritage list. The first is the Stevns Cliff or Stevns Klint. This is located on the island of Zeeland and is a white limestone cliff 40 meters high and 17 kilometers long. Specialists calculate that it originated in the Cretaceous. As an interesting detail, above the cliff is the old medieval church of Højerup. This beautiful building dates back to 1200 AD.

The other natural area is the Wadden Sea, which Denmark shares with Germany and the Netherlands. Although the Dutch area is quite visited, the same is not true for the area that corresponds to the Danes. However, it is really worth including it in the travel itinerary, because of the diversity of its landscapes that include forests, dunes, areas gained from the sea, marshes and, of course, beaches. For people who are dedicated to bird watching, precisely the lack of mass tourism, allows the place to remain the refuge of some 12 million birds, in addition to the presence of other species such as crabs, mussels, fish, etc. Another interesting detail is to tour the site through the vadevandring, a Danish word that refers to the dry routes that remain when the tide is low and that make it possible to move from one island to another. However, it is important to have the guidance of an experienced person from the area, as it is important to know the movement of the tides very well in order to avoid being trapped in the middle of the sea at high tide.

Places of tourist interest in Denmark

But Denmark has other interesting attractions that make it a unique country. One of them is Lego House, a place every fan of this friendly game should visit. There you will be able to play with the pieces as much as your imagination and skill will allow. If you travel with children to Denmark, don’t stop visiting it and the hours will pass for everyone without realizing it. The store is located in the city of Billund and works from 10 am. The Moesgård Museum is another pleasant experience for visitors. Located in the Højbjerg district, the museum combines technology with archaeological displays, science and history, in a fascinating architecture. The opening hours are from 10 am to 5 pm.

If outdoor activities are your thing, then head to the Vendsyssel-Thy island. There you will find Grenen Point, the northernmost point of the country. It is a beautiful place to walk around, where you will find sandy beaches and magnificent views, combined with fresh air. Remember to visit it in a time of pleasant climate, to increase the possibility of a clear and sunny day. On the same island there is an abandoned lighthouse called Rubjerg Knude. The look of the place has changed significantly since the lighthouse was first lit in 1900 and turned off 68 years later. This is due to the effect of the permanent sand and wind on the landscape. A walk through the history of Denmark? Then visit the old town of Aarhus, the second largest city in Denmark. Very well preserved houses, exhibitions and elements from various historical periods of the city, but consider that to visit it as completely as possible you will need a whole day.