Copenhagen has gone from being a charming Viking town to a city where there are pleasant contradictions: a cosmopolitan and developed city with beautiful buildings, museums, galleries and palaces full of charm, but far from being one of those European cities immersed in the bustle and excitement of the big capitals and therefore it is pleasant to travel around it even on bicycles. In this tourist map we will unveil this city, which went from being an attractive Viking fishing village devastated by a voracious fire to become the capital of Denmark, the seat of institutional and political power, a major commercial port due to its location on the Baltic Sea, as well as cultural and artistic cradle of Scandinavia, which has the award of being the European green city.

Although its architecture does not speak much of its history as most of its historical heritage was devastated by fires and the scourge of plagues in the 18th century, the tourist city of Copenhagen had its origin in 800 AD when it became a Viking fishing village that five hundred years later had the status of city and capital of Denmark that it retains to this day. Its geographical location, between the Baltic Sea and Germany gave it an important commercial boost and turned it into an important port city. From the beginning of the 21st century, after a lethargy and an economic crisis, it took impulse and became seat of important transnational companies and the culture grew with it, becoming a reference point of the King’s theatre and of the opera in which twenty percent of the population of Denmark coexists. 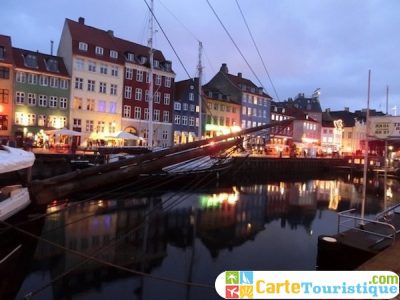 The tourist attractions of Copenhagen, located between the east coast of the Island of Zealand and Amager Island; are as varied as the area of the city in which the tour is focused, because it offers a range of attractions that go from palaces, monuments, galleries, green areas, beaches and also has the incentive of being an important metropolitan center that connects with Sweden through the toll and the Oresund Bridge. With a metropolitan population of almost two million people, its climate responds to well-defined seasons, with temperatures dropping considerably in winter, reaching minus 20 degrees and rising to 30 degrees in summer. The city has two airports, the largest with extensive international connections is Copenhagen Kastrup Airport on Amager Island and the second largest is Copenhagen Roskilde Airport in the Roskilde area. Within the city, residents and visitors can travel by using an integrated system of metro, trains and buses, which can be accessed through a single ticket office and with which you can change between different means of transport. However, its inhabitants prefer to travel around the city on bicycles, both to avoid traffic and because of the high cost of the transport system. This has also become a tourist attraction since there are good bicycle lane systems.

Copenhagen is a city turned into a metropolis, in which there are specific areas according to the interest of the tourist. Thus, there are locations such as the Nyhavn canals, where there is an abundance of cafes and restaurants that are internationally recognized and many of them qualify as the best in the world, with distinctions from the Michelin Guide for international tourism; although the fast food street stalls are attractive, where you can enjoy the best experience to taste sausages, hamburgers, pizzas, sushi and everything related to fast food; although the local government encourages the intake of organic food and is one of the cities where this type of food is bought and consumed more. It also has a lively nightlife focused on the areas of Vestebro and Norrebro, the part of the city where the largest number of bars and clubs are concentrated. It is a city to enjoy culture with the number of palaces, theatres, galleries, museums, statues and monuments in honour of Scandinavian royalty, beaches and artificial lakes.

What to visit in Copenhagen

One of the city’s major attractions is the Tivoli Gardens, a small area founded almost two hundred years ago where there is a variety of attractions ranging from theatres where a variety of shows are offered throughout the opening of the park, a number of restaurants and cafes, as well as traditional mechanical amusement parks with roller coasters from which the best views of the city can be seen. There are also natural attractions such as parks with walking trails and artificial lakes where you can enjoy evenings sitting on the shore. At nightfall it offers a very beautiful visual with the amount of lights. It is important to note that the Tivoli Gardens open in late spring, autumn and for a short time during Christmas. 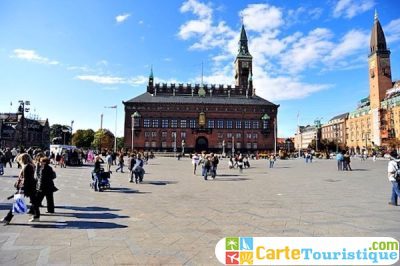 The Radhuspladsen or City Hall Square is the nerve centre of Copenhagen and is where most of the city’s life takes place. It is located in the central area, a short distance from the Tivoli Gardens. The city hall building is an eye-catcher and you can take internal tours and also appreciate the view of the city from its tower. This part of Copenhagen’s city centre is where most people live and where important institutional and commercial activities take place. It is a reference point through which most people who go to other areas of the city will pass. 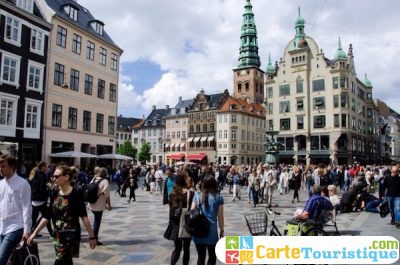 Also in the centre of Copenhagen is the Stroget, known as the street where most of the city’s commercial life takes place. It is two kilometres of entirely pedestrian streets where you will find the largest number of shops and businesses among exclusive, European department store chains, making it the centre of fashion and the ideal place to shop. There is also a variety of cafés and restaurants, discotheques, bars and nightclubs. All this variety of premises makes it one of the areas where the largest number of people are concentrated daily, so it also serves as a meeting point. 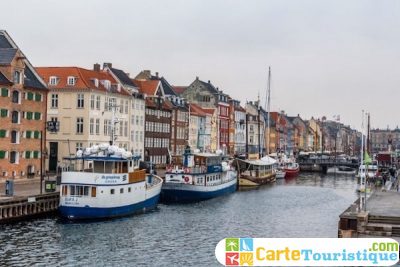 The Nyhavn or New Port is a structure is a port that covers about five hundred meters long and is used to sit on the edge to share chats and beers. One of its major attractions is the amount of multicolored buildings, also has a lot of cafes and restaurants type terraces, which have a nice view of the water channels. From there you can see one of the most beautiful postcards of the city, so it is the ideal place to take pictures and there is the option of getting on a tourist boat that travels through the channel to the island of Amager. 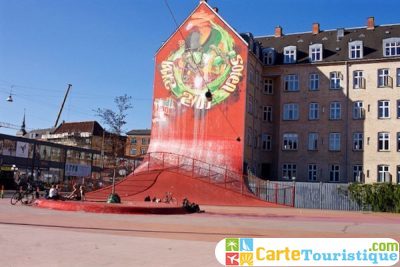 Norrebro is known as the alternative and multicultural area of Copenhagen. It is in the city centre and is a neighbourhood surrounded by lakes that stands out because it is a different atmosphere from anything else you can see in the city. In principle it is a residential area that hosts the largest number of immigrants in the city, especially from the Arab world. In this town there are a lot of shops where you can access to handicraft products made by immigrants, it is also the ideal place to buy international products and typical items from other countries, which are not found elsewhere in the city and stands out because it is a very picturesque area of extreme tolerance with different cultures. In Norrebro there is a diversity of restaurants, many of them catalogued with world-wide fame to offer the best of the gastronomy so it is the ideal place to enjoy the good table. 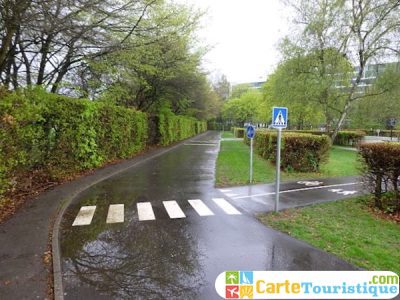 The FaelledParken is, perhaps, the most important park in the city, both for its size and for the beautiful green areas, well-wooded meadows, with a beautiful flora, lakes and paths that it has inside its facilities and that make people’s stay pleasant. Within this location, right in the centre of Copenhagen, you can do various sports activities as it has the infrastructure to do so. This has also been the scene of political and social demonstrations and is the meeting place for activities around issues of labor claims. 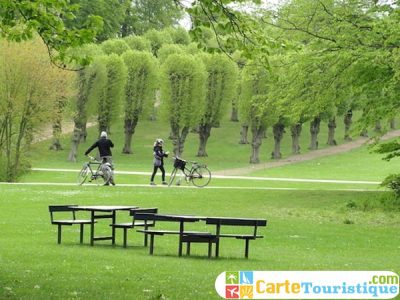 Frederiksberg is known for being practically a mini-city within Copenhagen. So much so that it has a political and territorial administration independent from that of the Danish capital, with its own authorities and institutional identity. Nevertheless, it remains in the general domain of Copenhagen. Within this mini-city hall is the city’s largest shopping centre, the Frederiksberg Centre, and it is characterised by being a beautiful, residential and quiet area, perfect for cycling, as it has a good cycle path infrastructure and is surrounded by lakes. 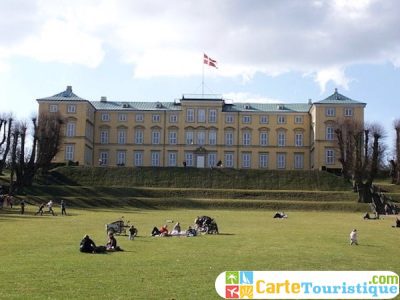 Frederiksborg Castle in Hillerod was built in the 17th century by King Christian IV and is now an important museum of Danish history. It was rebuilt in 1859 after a fire and its medieval infrastructure is notable for its red brick facade and green roof. To the interior it has a chapel that turns out to be one of his major attractions. The tour can be done through two important areas of the fortress. In the lower part, a large part of the original infrastructure is preserved and interesting objects and paintings of great Danish characters are displayed. In the upper part there is the historical museum where there is a collection of documents that tell the historical evolution until the modernity. 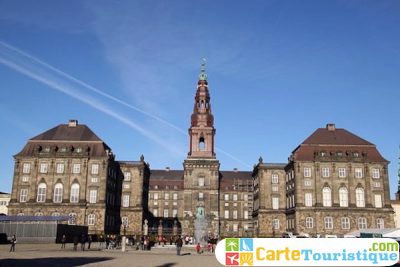 Amalienborg is the summer residence of the Danish royal family. There are four palaces built in the Rococo architectural style, which are located around a square in an octagonal shape whose center shows a statue of King Frederick V. Visitors can access two of the four palaces and enjoy the infrastructure and objects of interest as well as offices, dining room, cloakrooms with royal dress and rooms. Most of them have original furniture and infrastructure. At midday you can observe the change of the royal guard, this guard goes from Rosemborg Castle, built in the 17th century, to Amalienborg. 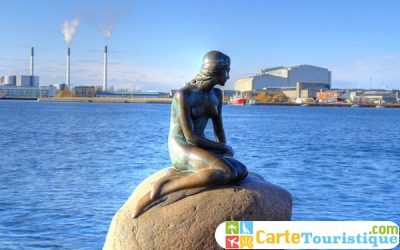 Although not a large statue or monument, the Little Mermaid is an icon representing Copenhagen and is located on the shores of the Baltic Sea. The sculpture was made in 1913 by EdvardEriksen who used his dancing wife as a model, it was a work commissioned by the beer entrepreneur Carl Jakobsen. Who gave him the monument to the city. It was inspired by Hans Christian Andersen’s tale of a mermaid who saved a prince, fell in love with him and had to give up her nature and replace her tail with legs in order to get married.

Accommodation in Copenhagen is expensive, as is the stay in the city, although you can find accommodation to suit a variety of budgets, always bearing in mind that the average cost of a room per day is 1390 euros. One of the recommendations is to stay in the city center, precisely because it is an area that connects with the tourist attractions and because it is where most of the life in the city takes place. Another option is the Vestebro area, which is cheaper and has good nightclubs and restaurants. One of the recommended hotels is the Ibsens Hotel, users indicate that it has good services including wifi, decoration, good attention and impeccable facilities with spacious rooms and bathrooms.

Video of Copenhagen’s most impressive sights