Let me recommend you in this opportunity, one of the most picturesque cities in Mexico, and that without a doubt, will mean for you; one of the best decisions regarding vacations, leisure trips, or self-discovery, whatever your intention is… the City of Veracruz, has it all, both in family entertainment, as if you just want to spend some time out of the daily reality…

Here I put at your disposal a tourist map of the city, in which I have taken the liberty of suggesting a route and tourist sites. Well, if you are like me, “I want to go, but I don’t know where to start”, it will be very helpful… your gratitude is the reason for these articles. There is a lot of majesty to share… and why not visit it, if it has one of the most pleasant tropical climates, belonging to the economic region of Sotavento, it is Mexico’s Gateway to the World, the largest and most joyful commercial entrance.

Veracruz, the largest and most important municipality in the State of Veracruz de Ignacio de la Llave, and is the one that has the largest and most important seaport for Mexico; responsible for its commercial life and names in such a special way; the urbanity “Zona Metropolitana de Veracruz”, the one that is about 400 km away from Mexico City, watered by the Medio, Grande and Tenoya streams, having beautiful beaches and islands like the one of Sacrificios and Verde. Also in the interior of the city you will be able to find great amount of lagoons like the one of Lagartos, La Ilusión, Malibrán, Real, Los Lagos, El Vergel… Its vegetation is of the low forest type, made up of trees that lose their leaves during the winter, with a great variety of wild animals, among which are mainly the heron, gull and rabbit. 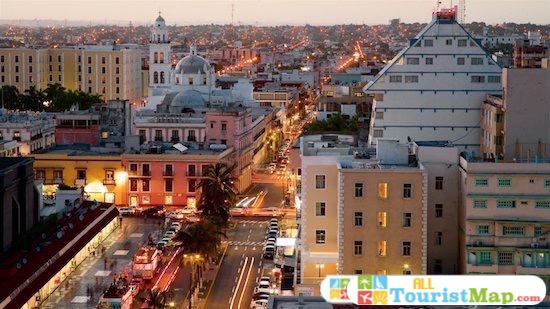 I recommend, as a lover of travel and adventure, that you take with you a tourist map of the city, both places in nature, as a map of the city center, this will facilitate your stay and give you guidance at all times, in addition to carrying a guide to the places to visit Veracruz, so we avoid setbacks and make the most of time … Always have a plan and support! When you arrive at your destination, always locate the nearest tourist office. This is an advice that will serve you well on any trip in your life.

The local fun and its rich heritage so authentic and endearing … is what founded the people and Veracruz, keeping the adrenaline charged, to close with a flourish … It is always good to support you and be well informed about the plans and services offered by your travel agents, as well as the tourist offices of your destination … Yes! I know I’ve mentioned this to you a lot, but they will be your allies, apart from the tourist guides, city maps and city centre plans, they will guarantee your fun and anticipate any eventuality. Also… obviously you’ll want places to eat, which will be suggested in all that tourist information I’m talking about, just take a street map. You won’t regret eating in Veracruz. Its dishes reflect the richness and depth of its roots, summing it up in the dazzling flavors of its characteristic marine ingredients which, in contrast to the European incorporation after colonization, are so richly mixed that they seduce even the most picky palates… Without a doubt, it’s a treasure worth celebrating.

Well, here is what I promised you, the best guide to get to the City of Veracruz, to tour it comfortably. Believe me, the road gets lighter; with a tourist guide of the city at hand, as I have advised you before and always locate the tourist office of the city, this formula will not fail. It was my experience, and I want to avoid bad times… It is important that when you arrive at Veracruz, through any of its doors, you locate in the Historic Center of the Port of Veracruz, since there you will be able to orient yourself more easily, efficiently in your surroundings, and you will have a wider notion of: “what to do, where to go, how to go and when” there are several delegations or tourism companies that offer tour services, covering a tour of the main sites of the city, that is one of the options you can take, as well as car rental, if you want. Or of the places you can visit in Veracruz, directly Boca de Rio, there you can get the Tram and Tourist Bus, Tourist Bus and Tribes Foráneo.

What to visit in Veracruz 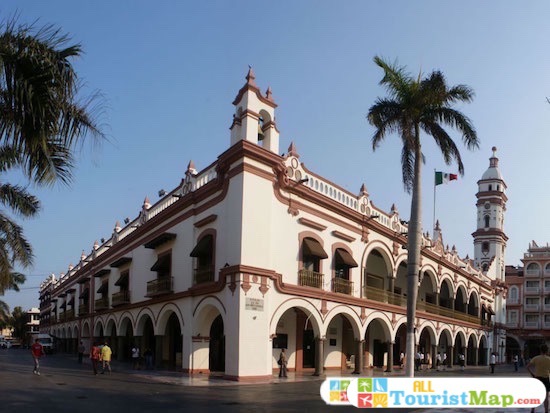 Declared a National Heritage Site by the National Institute of Anthropology and History, it is one of the city’s tourist sites that you will not want to miss. Here there are colonial buildings, among which the following stand out: the Parroquia de Nuestra Señora de la Asunción, the Iglesia del Cristo del Buen Viaje, among other important ones. There are even some buildings for educational purposes such as the Municipal Palace, the Customs House, and the Venustiano Carranza Lighthouse. It is located on the corner of Independencia Avenue and Lerdo, Veracruz – Veracruz. 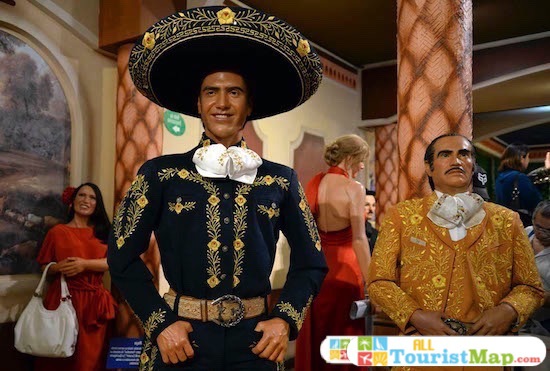 It is located in the Plaza Acuario on the Boulevard Manuel Avila Camacho, next to the aquarium. It is relatively contemporary and was inaugurated in November 2002 by the then Governor of Veracruz Miguel Alemán Velasco. This is a beautiful place that should not be missed, since it extols local art and culture, but also hosts modern arts. At present, it has 14 rooms and more than 120 wax figures, representing Sportsmen, singers, politicians, religious figures and actors. Among its main attractions, it has a maze of mirrors and the Trembling Tunnel.

Mouth of the River 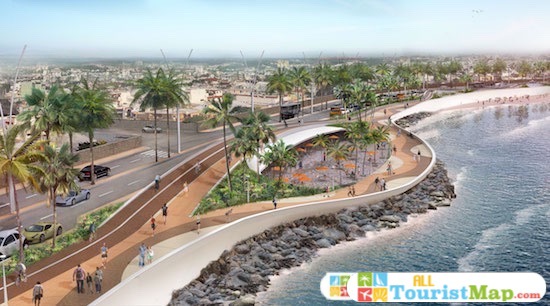 Veracruz Port, here is the Historic Center, so it is perfect to start your tour, is easy access to the coast and the different tourist sites that will be developed in this tourist guide. Here you will find: Paseo El Malecón, Plaza de las Artesanías, Catedral de Veracruz, Museo Naval, Asociación Mexicana de Hoteles y Moteles, Gran Café de la Parroquia, Teatro de la Reforma, Plaza Acuario, Museo Agustín Lara. Boca de Río is located on the coast of the Gulf of Mexico, at the mouth of the Jamapa River, south of Veracruz. 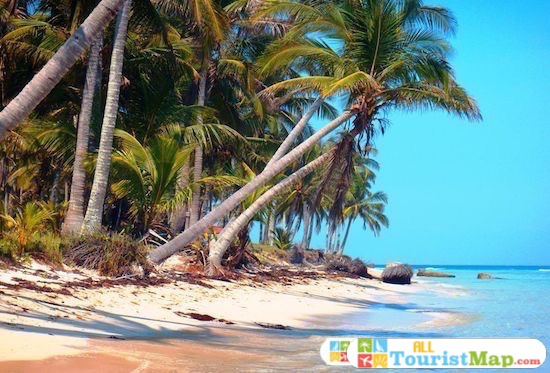 There are more than twenty kilometers of beaches that run from Nautla and Tlapacoyan to beyond La Guadalupe and Tecolutla. It is one of the main natural treasures of the state. Its green and crystalline waters are characteristic, which gives it its name. Its natural wealth and great extension, lends itself to the alternatives of natural relaxation and sport activity, in contact with nature.

The boom that has seen the Emerald Coast as one of the tourist sites of Veracruz, has led to the development of land access. It is possible to reach different parts of the Costa Smeralda through modern roads and constant transportation services; the main destinations are usually the cities of Nautla, Tlapacoyan or Tecolutla, however, the most popular is the one that goes along the coast of Veracruz and is known as “the circuit of the Gulf”. 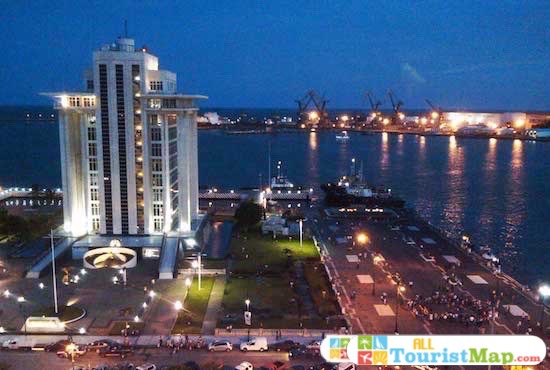 Its name means “place where the snake hides” due to an ancient legend. This beautiful city, is inviting; to a prolonged stay, with wonderful views of the port, perfect for night walks, tours by the malecon that put at your disposal shops, restaurants, cafes and bars to enjoy the sunset. And modern wonders such as the Jurassic Park with its huge dinosaurs, interactive entertainment for children.

It comprises almost 54 km of coastline, surrounded by wetlands, and is responsible for a large water body, which allows for the prosperity of aquatic life. It celebrates a very particular and modern festival (created in 2002) called “Fiesta del Coco”, with the aim of trading this fruit of its coasts, in any form in which the coconut, can be presented. The festival is held on the last weekend of February, and is based on making the largest possible coconut.

It forms the essence of the state’s metropolitan area and its capital. It is a town located on the slopes of the Macuiltépetl volcano, around it there are cloud forests with a great and vibrant climate. Its environment is a mystical place thanks to its trees and flowers covered by a delicate dew, plus the immense culture and art that the town has to offer. 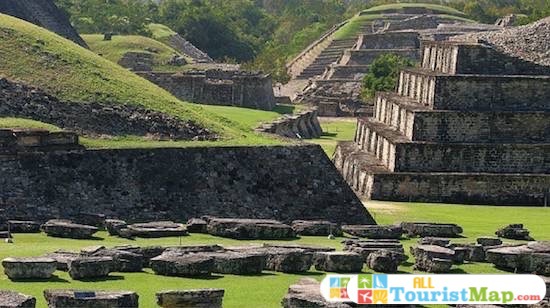 It’s a city that belongs to the north of Veracruz, which was founded by the ancient Totonata civilization, from them start their attractions that are of archaeological and historical wealth highlighting El Tajin, which is a pre-Columbian archaeological site, where he lives a pyramidal structure, waiting to share all its ancient wisdom and architectural beauty. 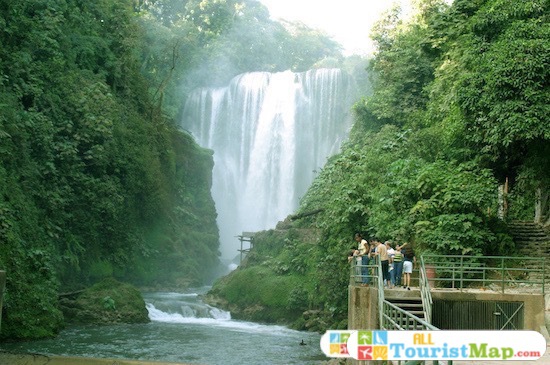 Its name means “rabbit or yellow birds”, among its attractions, is the fact that it is the region with the largest ecological reserve, recognized worldwide. It is located in the center of Veracruz City, and it is considered the “Treasure of Veracruz”. It is a paradise for ecotourism and is enormous in cultural richness, art and folklore.

This beautiful square is surrounded by the Cathedral of Our Lady of the Assumption and the Municipal Palace, this design was agreed in the ordinances of Philip II of Spain for the construction of those cities of Indians, to contemplate what he called a Plaza Mayor that had around it the main buildings that were the headquarters of the constituted powers and from which the layout of the streets. In this one there were carried out movements of troops, for this reason his name of Plaza de Armas. Nowadays, it is forested and has a radiant marble floor. Without a doubt, it is the heart of the tradition and culture of the city. It has a stage in the center where you can see artistic expressions typical of the city such as danzón and Jarocho folklore.

If you want, if you decided to undertake this fascinating adventure, with the help of our team, let me recommend that as a place of accommodation, board mainly, Boca de Rio, because it is the most friendly site with tourists, and adventurers like you and me … is quite accessible to its surroundings and various tourist sites in the city, with easy transportation. It is full of tourist information, offers many options for food, lodging and the best prices, with excellent services and amenities, even for the most demanding tastes. I give you an important piece of information for this adventure in this beautiful tourist destination… in front of the historical center, in Independencia Avenue, with Esquina Lerdo, is the Hotel Veracruz center, in front of the zocalo and the cathedral, recommended by its location and its excellent service.

Video of Veracruz, the most impressive tourist destinations