If you are looking for your next vacation destination or are interested in getting to know new places, Mexico City is the ideal place, thanks to its extraordinary tourist sites full of history. To facilitate your stay in this wonderful city we have prepared for you a tourist map of Mexico City, in which you can find those most interesting and outstanding places, those that you can not miss if you come to this impressive city. In addition, we have included a map of hotels that are perfectly adapted to your needs.

Mexico City is one of Mexico’s 32 states, as well as the capital of the United Mexican States. It is located in the Valley of Mexico, at an average altitude of 2,240 meters above sea level. It has an area of 1,495 km2, and is administratively divided into 16 delegations. Its population is approximately 8.9 million inhabitants. However, when the Valley of Mexico Metropolitan Area is also considered, it then has a total population of more than 21 million inhabitants, which places it in ninth place among the largest and most populated urban agglomerations in the world, and thus the largest in the American continent and the Spanish-speaking world. 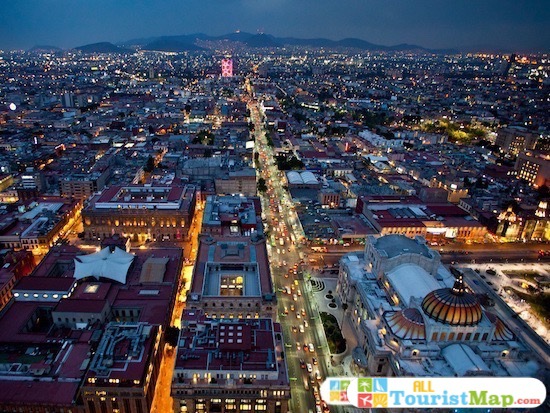 We can say that cdmx is the largest urban nucleus of the Mexican Republic and also its main social, political, academic, economic, business, artistic, tourist, cultural, communications, financial, entertainment and fashion center. It has been the scene of several of the most important historical and media events of that nation.

Four of Mexico City’s 34 World Heritage Sites are located in the city: the Historic Center, Xochimilco, the Central Campus of the University City of the National Autonomous University of Mexico (UNAM) and the House and Studio of Luis Barragán. In 1968, it was the first city in Latin America and the Spanish-speaking world to host the Olympic Games. The city has the second largest number of museums (151) in the world, after London. The dominant and official language in Mexico City is Spanish (as in the whole country). It is spoken by the majority of the inhabitants, however, Nahuatl and Otomi are also considered to be the native languages of the capital. The Nahuatl language is the most widely spoken native language in the capital city and the one that was spoken mostly in the period before the Spanish conquest.  The second original language that survived the conquest and the urbanization process was Otomi. This language is still spoken by some natives of the capital city in the territorial demarcation of Cuajimalpa.

In this article we bring you a tourist route to help you discover the tourist sites of Mexico City, and it is that whenever we go to a place we do not know, we have many doubts, such as, what places can we visit? where can we eat? if there is a tourist bus, even where can we stay? For this reason, our purpose is to help you with the answers. Its historical center is Zócalo, a UNESCO World Heritage Site and the heart of a living culture that exudes everything accumulated since the founding of Tenochtitlán. It is the largest and most emblematic in Latin America, considered one of the most important tourist centers in the world and the main destination for cultural tourism in the country. It is home to some of the nation’s most prized cultural treasures and true architectural gems, with nearly 1,500 buildings, including museums, temples, hotels, galleries, shops, theaters and cultural centers, many of them classified as historical or artistic monuments. In 668 blocks and a surface of 9.7 square kilometers, it is possible to admire the architecture that summarizes the history of the pre-Hispanic, colonial, independent and modern times of the country.

What to visit in Mexico City 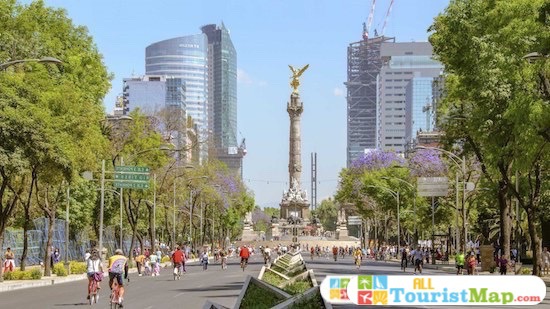 It is an avenue of approximately 15 kilometers long, which crosses a good stretch of the city between nature and fascinating cultural and historical attractions. One of the most important is the Angel of Independence (it has become an icon of Mexico City around the world). This imposing monument is little more than a century old and is located in a small square surrounded by the overwhelming traffic of Mexico. During the tour you will also find the National Museum of Anthropology, where an impressive collection recapitulates the ancestral history of the peoples of Mesoamerica accompanied by research projects that continue to surprise the region. Throughout the tour, which can be done by bicycle, you will find more squares, monuments and tourist sites that will lead you to know and appreciate even more the dynamics of the city and why not, also of the country. 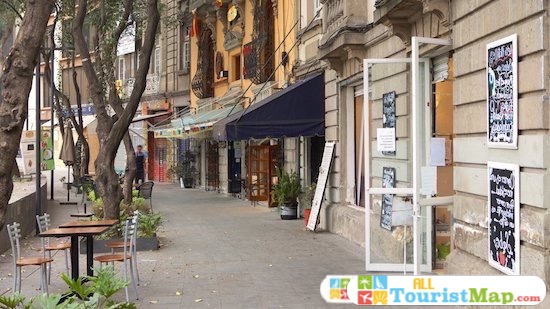 It is one of the urban spaces in which the dynamics of tourists and citizens are intermingled between colour and avant-garde.  After visiting historical buildings, parks and museums, and getting to know the history of Mexico and its admirable towns in depth, it is necessary to take a day off with a little more relaxed activities. This neighborhood is very close to the city center, and has become one of the most important areas of development, thanks to the fact that it covers a very wide range of services. Its architecture is undoubtedly one of its greatest attractions, since several personalities of the country have lived here and now it houses a young population, which has combined the existing with new ideas. In addition, you can visit its cafes, parks, libraries, restaurants, shopping malls, even discos, and watch the day go by while enjoying good food, a concert or a good play.

Museum of Memory and Tolerance

It was on October 18, 2010 when this wonderful museum opened its doors for the first time. Located in Mexico City, it seeks to transmit to each of its visitors very important values, such as respect and tolerance, based on historical memory through its impressive exhibitions of genocides and its magnificent multimedia presentations on the values that favor tolerance. It has a temporary exhibition hall located on the second floor, a room dedicated to children where they can carry out recreational activities that lead them to reflect on values such as respect, teamwork and tolerance, and also an educational centre where free monthly courses are held.  This valuable museum has been visited by very important figures, such as the Dalai Lama, Zanani Mandela, Frank La Rue, Adrián Guzmán, Richard Tiffany Gere and many others. 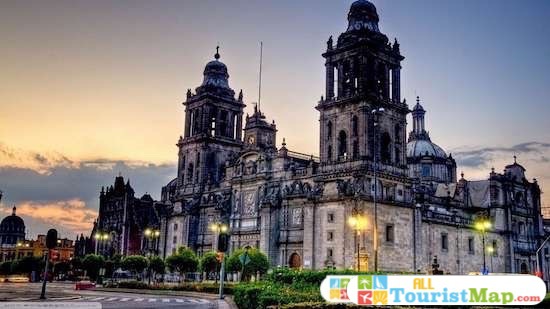 It is a majestic work built in gray quarry stone, and is named the Metropolitan Cathedral of the Assumption of the Blessed Virgin Mary, to whom it was dedicated. It is constituted as the main church of the primate archdiocese of Mexico.  Its construction took three centuries to be completed, which is why there is such a great diversity of architectural styles that you can enjoy. The metropolitan cathedral of Mexico City is majestic, in the capital’s pedestal as the largest cathedral in Latin America and is one of the most emblematic temples of Christianity in the world.

This wonderful museum was built to give Mexican design the place it deserves. The museum that houses the also called Mumedi, was built on the palace of the Spanish conqueror of Mexico, Hernan Cortes. Its current façade was designed at the end of the 18th century by one of the disciples of architect Manuel Tolsá. In this wonderful house you will find a showroom, a shop where you can find beautiful Mexican designs, bags, jewelry, handmade work and other ornaments, as well as a cafeteria where you can rest a little before continuing with your tourist route. 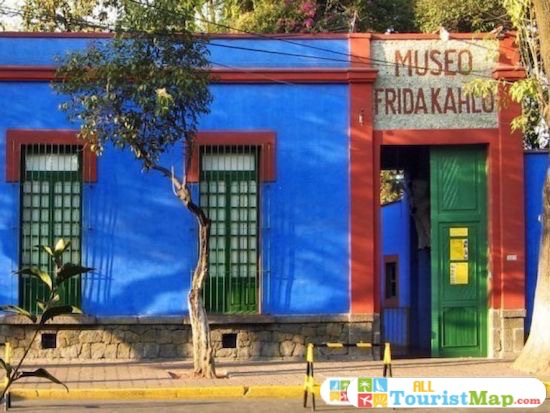 The so-called Casa Azul Museo de Frida Kahlo is, without a doubt, the place where personal objects reveal the majestic intimate universe of the most renowned Latin American artist in the world. Here you can find some of her important works, such as Portrait of my Father Wilhem Kahlo (1952), Long Live Life (1954), Frida and the Caesarean (1931), among others. This magnificent place is located in one of the most beautiful and ancient neighborhoods of Mexico City, was converted into a museum in 1958, four years after the death of the painter. Today it has become one of the most visited museums in the Mexican capital. 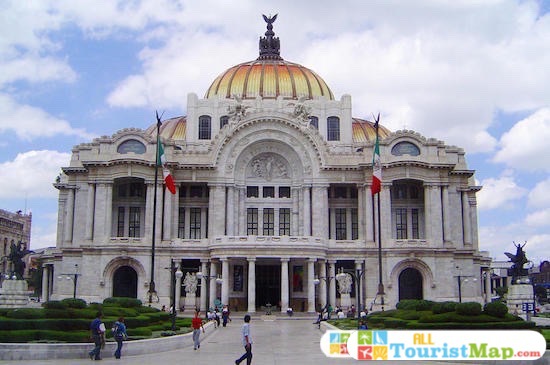 It was initially inaugurated in 1934 under the name of Museo de Artes Plásticas, being this the first art museum in Mexico. Its collection included pieces from the 16th century to murals from 1934 by artists Diego Rivera and José Clemente Orozco, as well as a Mexican print, a popular museum and a Mesoamerican sculpture room. Currently you can enjoy 17 murals executed between 1928 and 1963 that the Palace exhibits permanently, as well as temporary exhibitions and a great number of activities open to all audiences. 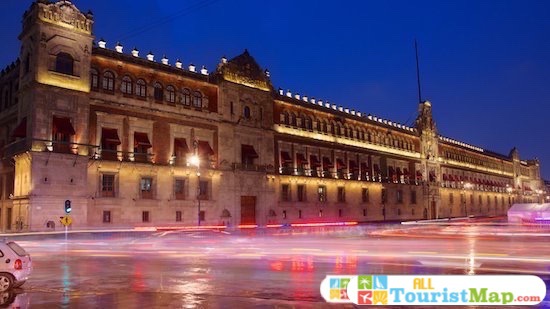 In the national palace you will find many places of interest within it, among these are the famous murals by Diego Rovira in the corridors of the central courtyard, in them he pleasantly tells the history of Mexico from pre-Hispanic times to the last century, without doubt it is a work full of color, symbolism and Mexican nationalism. Another place that might interest you is the enclosure made in homage to Juarez, where his belongings, furniture and even the documents of the aforementioned president are still found. You can also visit the Federation’s treasury room, a splendid place with art deco influence. Likewise, the Library of the Historical Fund of the Treasury and the Empress’ Garden, located in the eastern part of the Palace are places you cannot miss.

Currently, Mexico City offers hundreds of options in terms of accommodation. For your convenience we will provide you with a map of hotels in Mexico City. If you are looking for a luxury hotel in the Polanco district, you will find excellent attention and extraordinary services, such as continental breakfast, spa services, gyms, swimming pools, among other great activities and amenities. On the other hand, in the historical center you will find a great variety of hotels that, in general, offer more accessible rates in exchange for simple rooms, well located and with private bathroom, ideal for families or young people.

Video of Mexico City, the most impressive tourist destinations