Guadalajara is one of the most beautiful cities in Mexico, capital, political and economic center of the State of Jalisco, here you will find a tourist map of the city of Guadalajara, with its temperate or subtropical climate will immerse you in a comfortable and welcoming environment.

In this tourist map you will know the extensive variety of gastronomy that there is in the city, while you will enjoy historical centers like museums, zoos, parks, forests and an architecture influenced by French and Spanish currents, with monuments like “Los Arcos de Guadalajara” and “la Minerva”. The religious constructions have a great tourist attraction with a neoclassical, baroque and neo-gothic style; among the most beautiful are the temples of Guadalajara and Santa Monica, and the cathedral of Guadalajara. We definitely invite you to get to know the city of Guadalajara.

Guadalajara is located in the state of Jalisco, in the western part of Mexico, in the micro-region of the western Bajio, where you can find different areas for all tastes, to access through it to the various villages, trails, parks, attractions and even restaurants and of course hotels, by having this map you can enjoy a more comfortable and pleasant stay by knowing how to go in an easy and practical way to those beautiful and striking sites that are of interest.

It is also very important to have at hand a map of the hotels and inns of the city according to your preference, as well as another where you have not only a map of the historical and modern tourist sites, but also a list where you detail each place you want to visit, if possible in the same order in which you would like to visit them, without forgetting that in the city of Guadalajara you will find beautiful and majestic historical monuments, Cathedrals of the past, forests and subtropical passages that will make you want to get lost in them and their beauty, you will also be able to enjoy an exquisite gastronomy and wonderful amusement parks with attractions for the whole family, don’t forget to visit the zoos, in Guadalajara there is a great reserve for the care and reproduction of animals in danger of extinction, learn more about each detail below, we are waiting for you.

We will show you, without a doubt, the best guide to access the city of Guadalajara, in a comfortable and quiet way in case you have a tourist guide of the city. Of course, it will be a much more pleasant and tenuous arrival and stay, however, remember to have the location of the historical center of the city and its attractions, because you will have easier access to the rest of the city and you will be able to feed yourself with the richness of the city.

Knowing its culture, customs and traditions, its gastronomy, its most visited places and because, standing out from its monuments and older constructions to the most current and visited amusement parks of Guadalajara, without forgetting its ecological zones full of an extensive variety of fauna and flora. In the city they offer you different specialized tours according to your comfort in which the guides will not only show you the attractions of the city but also teach you about them. However, near the Guadalajara International Airport there is a car rental agency, if you choose this option you will have the freedom to tour the city at the time you want and in the order that suits you best.

What to visit in Guadalajara

The Cathedral of Guadalajara 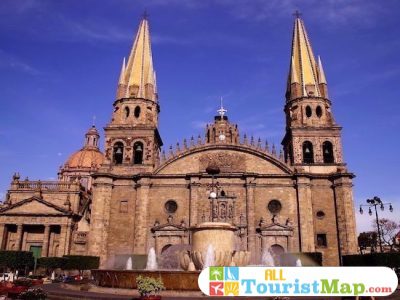 Also known as the Cathedral Basilica of the Assumption of the Holy Mary, is one of the most recognized buildings of the city, is characterized by its impressive towers with sharp neo-Gothic and have suffered transformations throughout history, as at first its roofs were straw, but over the years was reconstructed making it not only more resistant but also much more attractive and with a completely unique style and peculiarly beautiful, which generates in tourists a desire to visit. It is one of the oldest and most important buildings in the area, contains in its interior extraordinary works of art and various historical objects that are definitely worth going to see. 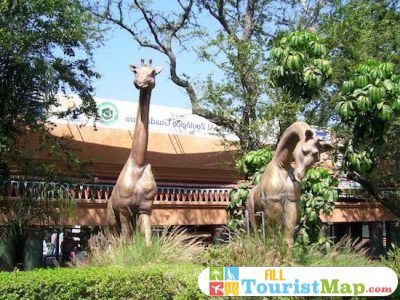 It is a perfect place to visit with your family, it is located to the east of the Guadalajara Metropolitan Zone, it is one of the most important and biggest in the country with a great number and variety of species. Inside the park you will know from snakes with lizards, turtles and snakes, aviaries with tropical birds, aquariums with more than 90 species of fish among which you will see sharks, jellyfish even stingrays, the safari Misai Mara is one of the most recent attractions, becoming the first zoo-safari in 2005 with animals from the African savannah such as giraffes and zebras, you will admire cheetah flamingos and white rhinos, the tour is done in a specialized vehicle while the guide gives information about the animals that live there and some of the customs of the area in which they live. 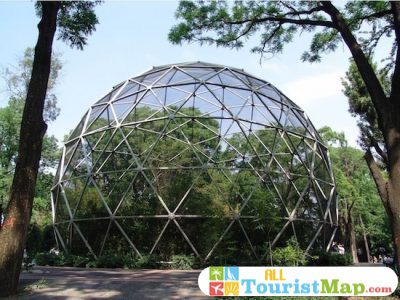 Public park of Guadalajara built between 1946 and 1952, it has an area of 168,500 square meters, with beautiful gardens and 1,465 trees of different species, at the beginning the park was used for walking, relaxing and social activities of common public interest and later it was transformed into a zoo.

Upon entering the park you can see a giant aluminum sphere which is a butterfly house called “the house of the butterflies”, besides having a reproduction clinic to combat the risk of animals in danger of extinction, and it is an honor to communicate that so far it has worked in a surprising and successful way. Also, you will see an orchidarium with exotic orchids from the region, they are in their own greenhouse, under a tropical-humid climate controlled all year round. 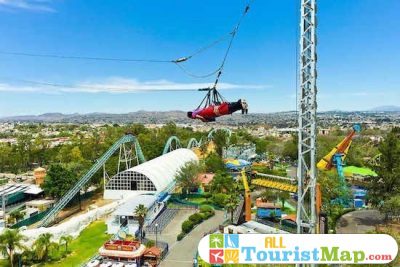 The extreme attraction “Titan” is a roller coaster that takes the place of the largest in the west of the country of Mexico, the minimum height is 1.10 meters, height from which you will see the aquarium, the lake and the Australian village, today the “Titan” is the most popular and sought after attraction in the park.

The Regional Museum of Guadalajara 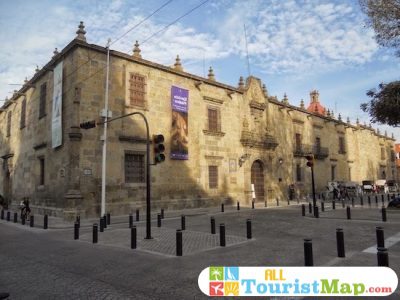 This museum was built in the XVIII century, originally it was a school-seminary, during the War it was a barracks for the insurgent troops and prison for Spaniards, but in 1918 it was inaugurated as a museum with the name of Museum of Fine Arts, Ethnology and instruction of Fine Arts and Artistic teaching of Guadalajara, nevertheless it was opened to the public in 1976 as a regional museum; which has 14 exhibition rooms among which archaeology, painting, history, ethnography and paleontology are shown.

These rooms are distributed in two floors, in the ground floor you will enjoy the prehistory, archaeological and paleontological facts, you will observe the solar system, information about the planets and the universe, besides prehistoric fossils like the one of a mammoth. On the upper floor you will find paintings from the colonial period, dating from the 17th to the 19th century, made by personalities such as Echave, Villalpando and Cabrera. 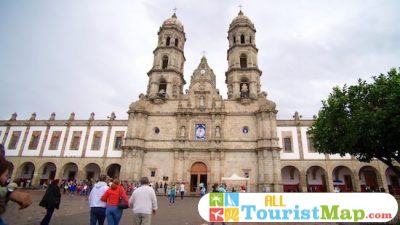 One of the most sublime sanctuaries of the Guadalajara Metropolitan Zone in Mexico, this one is located in the historical center of Zapopan, the same one is one of the places more visited frequently by the tourists and by the inhabitants of the zone, who constantly concur to reverence the most holy Virgin of Zapopan.

Every year a pilgrimage called “la romería” is carried out which is a festivity celebrated on October 12th, this tradition originated in the fourth decade of the 18th century. Later on, the image of the virgin was declared patron saint of the city against storms, lightning and epidemics, so it visits the whole metropolitan area in the rainy season, and then it returns to its sanctuary in Zapopan. 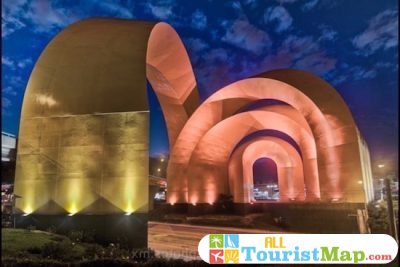 Also known as the Arches of the third millennium, are a sculptural work of the Mexican artist Enrique Carbajal Gonzalez, the millennium arches have a height of 52 meters, is made up of 6 splendid arches of a yellow color made of metal, these go in sequence from larger to smaller, being the second largest than the first, the third largest than the second and so on, having an approximate weight of more than 1,500 tons of steel and an area of 17,000 square meters.

This monument is one of the most important in the city, since when it was installed, it was the first monument of urban art made in the city for approximately 30 years, and although it took time to finish its construction, the result was undoubtedly better than expected; beyond improving the image of the city, it is worth admiring. 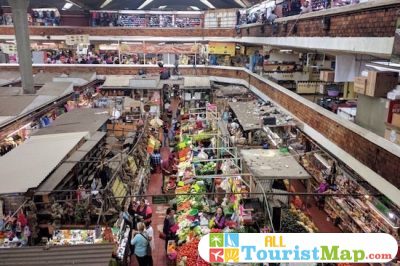 It is also known as the liberty market, but it is popularly called the San Juan de Dios market, it is divided into 3 different levels, and has 2 additional parking lots where you can leave your car, which you previously rented, for your convenience; on the first level of the market you can find a section of all kinds of typical local sweets and groceries, as well as the handicrafts area. The market’s inns and small restaurants can be found on the second level, where you can try exquisite dishes, and on the third level they display imported items, clothing, shoes, electronics, and films, among others. Don’t forget to visit it, in short, if you go to the city of Guadalajara, I recommend it.

Map of hotels in the city of Guadalajara

Guadalajara has a wide variety of hotels for all tastes and sizes, in this opportunity we will recommend you the most popular ones, in the 2 stars classification we have first of all the Holiday Inn Express Guadalajara Autonoma the prices are around 1700$. In the 3 star classification we have in first place La Mansión del Sol, with prices around 1200$. With 4 stars in first place is Hilton Guadalajara with prices around 1900$. In addition, all 3 have a swimming pool, bar/restaurant, gym and are close to various tourist sites such as museums, temples, monuments, forests. We are waiting for you!

Video of the city of Guadalajara, the most impressive tourist destinations