Frankfurt is known as the financial capital of Germany. It is one of the most important cities in the area of economy and business in the European Union. But, this distinction does not stand out above the beauty, culture and history that exist in one of the most international cities of that country. In this tourist map, elaborated for you, we allow ourselves to highlight not only the history that surrounds it, but the cultural legacy of the city, which is impressive. The number of museums, in different areas of knowledge and science, make it a spectacular place to cultivate the intellect and increase knowledge.

The tourist city of Frankfurt, known in the local language as Frankfurt am Main, since its foundation in the 12th century has been the European financial center par excellence and from there it has been a receptacle for investors and people eager to do business, coming from the Mediterranean and the countries around the Baltic Sea, since great commercial exchanges took place there. Nowadays, it has incredible tourist attractions such as a series of museums, religious architecture, impressive financial buildings, natural parks and streets in which its medieval past stands out and contrasts with modernity. Frankfurt, which is part of the Federal State of Hesse and is a relatively small city as it only occupies about 248.31 km², is located in a valley, surrounded by the Tannus Hills, in an area known as Rhine Main. It has a climate that can be enjoyed at any time of the year, since its winters are moderately cold, but its summers are warm and it is at this time of the year when it is recommended to travel and enjoy the city and its tourist sites. 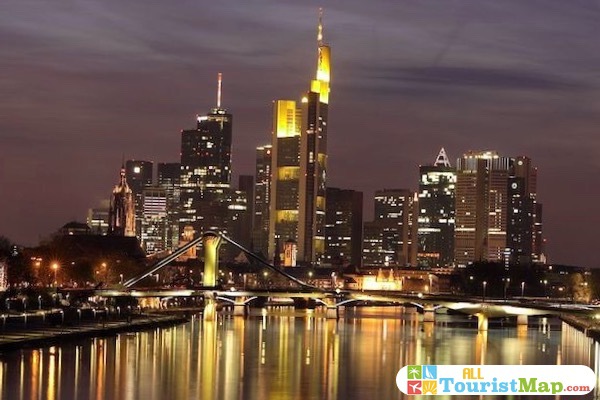 In this sense, it is worth mentioning the number of museums and their different themes, which range from history, natural sciences and communications, among others. There are also the shopping centers, which offer from outstanding and avant-garde brands to quality and economic merchandise, neighborhoods full of restaurants that offer the best of Frankfurt’s gastronomy, one of its main tourist attractions. Also, to highlight the visitor’s experience, throughout the year a series of international events and fairs take place in the city; as well as the existence of a large number of bars and nightclubs with live music. It is not difficult to move around to get to know this city, which has around 732 thousand inhabitants and is the fifth largest in Germany, after Berlin, Hamsburg, Munich and Cologne. Frankfurt has a solid transportation system with subways, trams and trains, which helps to lower costs for visitors, who can do without taking taxis.

Frankfurt is a city that is worth visiting inch by inch, as there is so much to see. The large number of museums are at the top of the list of tourist attractions. There are all kinds of them, in fact, there are a number of them that are located on the riverside. However, history is not only seen through them, but also through the birthplaces of famous people, who are not only part of German history but also belong to the world’s cultural heritage. Besides the cultural attraction, there are impressive botanical parks, samples of architecture and places to taste the gastronomy of the city, one of the best known in the country, as well as the cider houses and wine cellars, which are a great culinary attraction.

What to visit in Frankfurt

The Museumsufer is, in Spanish, “the bank of museums”. It is an area of Frankfurt dedicated entirely to the arts and knowledge with a large number of museums showing the best of different areas of knowledge. The area consists of about twelve exhibition halls located on the north bank of the Main River, in which the best of the city’s culture is exhibited and gives the tourist the opportunity to interact in a meaningful way with the most representative of German art. Although entrance to the museums has its cost, there are opportunities for visitors to access them for free. One such opportunity occurs once a year and is called the Night of the Museums, since the rooms are open until late at night. A similar opportunity occurs during the months of August each year, when the Museumsurfer festival is held. In these rooms there are exhibitions ranging from historical furniture, architecture, postal communications, modern and classical art, sculptures, paintings, contemporary artists, among others.

St. Bartholomew’s Cathedral, also known as the Cathedral of the Empire or Kaiserdom, was the scene of the coronation of German emperors between 1562 and 1792. Until the 1950s it was one of the tallest buildings in Frankfurt, measuring some 96 metres. It was built in the ninth century using red sandstone as a building material and was erected as one of the main symbols of the city, visiting St. Bartholomew’s Cathedral is not only an experience to get in touch with the most representative of religious architecture. In spite of the fact that it was partially rebuilt after World War II, it still preserves great traces of its original infrastructure and, due to its size, one of the most impressive views of the city may be observed from there. 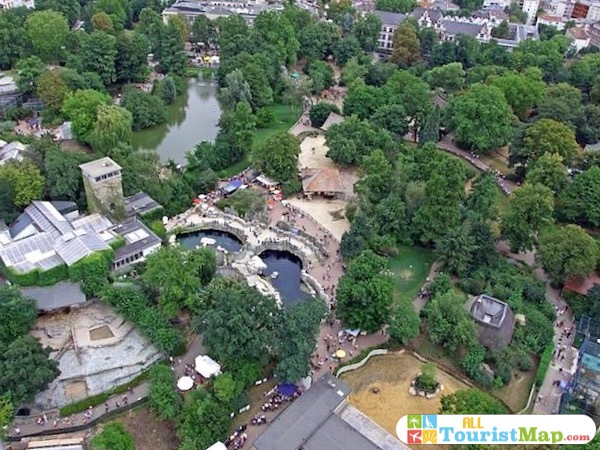 The Frankfurt am Maine Zoo is one of the most important and impressive zoos in Europe. This enclosure has an extensive history, since its first exhibition, the Exotarium, was inaugurated in 1877. Visiting it is ideal for tourists who travel with children and want to take them to a place where the experience and interaction will be rewarding. The zoo has fourteen hectares and thirteen areas with a great diversity of animals. This area is home to some 4,500 animals of 450 different species. One of the most remarkable aspects is that they exhibit many animals that are currently in danger of extinction and that come from all over the world. The Grzimek, or nighttime setting, also stands out, giving visitors the opportunity to appreciate the animals in their nocturnal habitat. The diversity of fauna and the ingenuity of their habitats explain why this zoo receives more than 800,000 visitors every year. 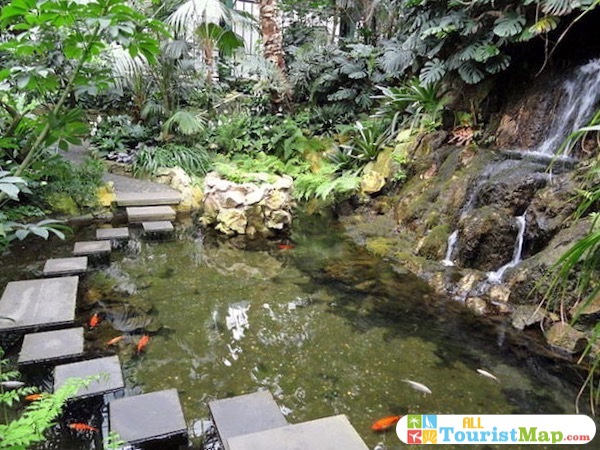 The “palmengarten” has existed for about one hundred and fifty years, the same neighbors built the Palm Garden, a botanical garden with tropical species brought from The Bahamas. Its importance not only extends to Germany, but it is one of the most visited gardens in all of Europe due to its diversity and exceptional beauty. 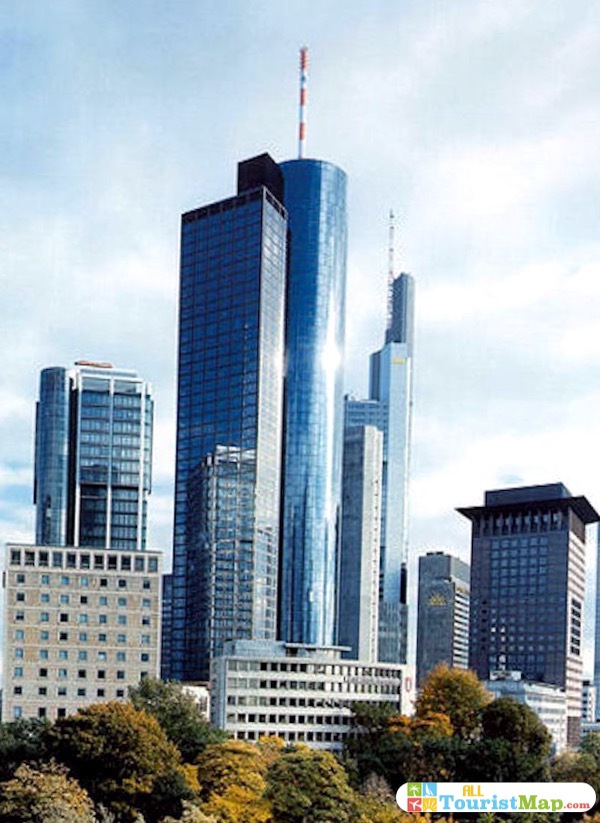 The Maintower is the only skyscraper in the city with an observatory. It is one of the tallest and most impressive, not only in Frankfurt, but in Europe. It is a building of two hundred meters and 56 floors.  Its design resembles a merger of towers and inside there is a conglomerate of companies ranging from banks and financial institutions, radio and television stations and offices of important business affairs. Its construction was completed in 1999, after three years of work. 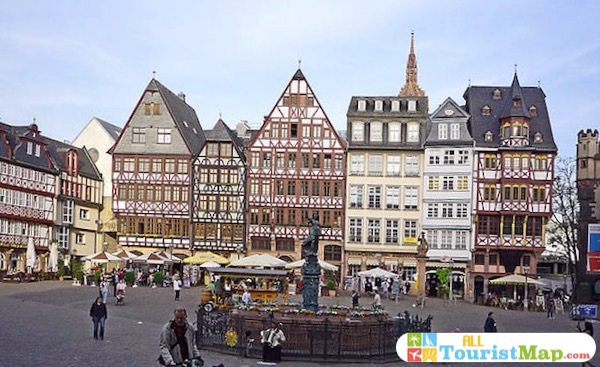 Romenberg is one of the most frequented districts of Frankfurt. It is a sector that represents the oldest part of the city since it exists since the 9th century, when the city was founded. Nowadays it is a place where there are traces of the medieval history that are amalgamated with the modernity. Tourists come there to learn about the history and enjoy the countless events that take place in its streets. Furthermore, throughout its existence it has hosted markets, fairs and also part of the dark history such as executions and all kinds of transactions. 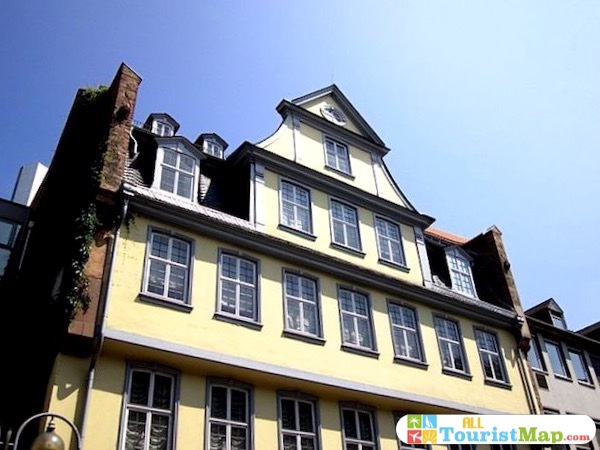 Johan Wolfgang von Goethe was born in Frankfurt in 1749. This writer is one of the world’s classics with his literary works Faust or The Sorrows of Young Werther, so if a visitor has the opportunity to go to the house where he was born, where he came into the world and spent much of his youth, he can do so in order to live a little of what the life of this artistic genius meant. Upon arrival at Goethe’s house, visitors can appreciate personal objects that offer details of everyday family life. 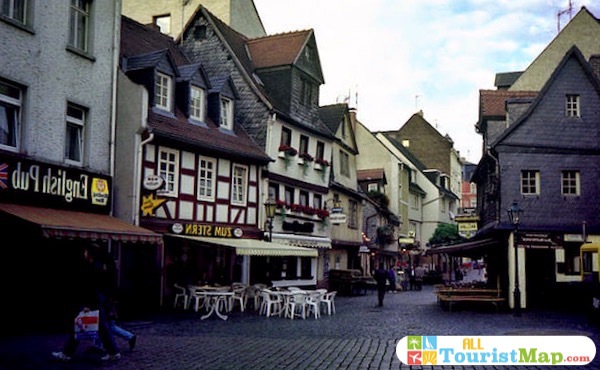 One of the things that visitors cannot do without is to visit the network of taberbas in the Sachsenhausen district. There they can drink one of the most typical German drinks, such as Apfelwein or apple wine, in many of these taverns they prepare them with homemade recipes that have been in their families for many generations in at least three centuries. But, in the neighborhood there is availability of any amount of types of cider elaborated in a handmade way.

The Senckenberg Museum in Frankfurt is one of the city’s most interesting tourist attractions. It is the largest and most important exhibition hall on natural history, not only in the city but in all of Germany. In its facilities, visitors can see thousands of fossil samples, ranging from animals of all kinds, including amphibians, to Egyptian mummies.  But, the museum’s most famous attraction is the exhibition of dinosaur skeletons. This exhibit is one of the most significant in Europe and contains valuable information for visitors interested in learning about the natural history and evolution of species. 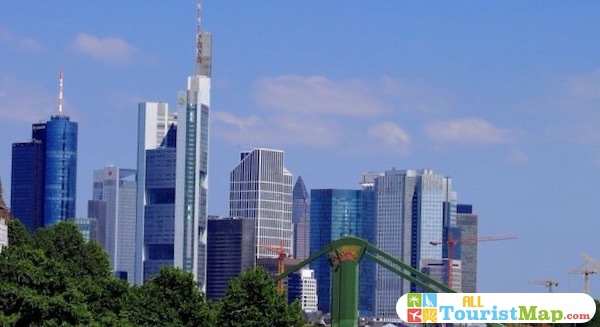 Mainhattan is one of the newest areas of Frankfurt and was named after Manhattan, an island belonging to the American city of New York. Manhattan in New York is considered the most important financial center in the world. That is why, like its American counterpart, the structure of Mainhattan is based mainly on the construction of imposing skyscrapers, which now number more than forty. But, not only that, there is also an exquisite contrast with the medieval city that began as the centre of Europe’s trade and economy. This explosion of contemporaneity is due to the fact that Frankfurt has the second largest airport in Europe, so many of its visitors are businessmen.

As a tourist city, Frankfurt offers a wide range of hotels and accommodation facilities. It is a place with a high rate of visitors, either as tourists or as people who will do business and economic affairs, so there is a wide range of hostels available to users, with a variety of forms and prices. The Best Western Hotel, located in Neu Isenburg, is a modern and spacious building, which, according to comments from users, offers good quality, both in service and in its facilities. It has a well-designed lobby and well-lit leather and wood furniture. It has a good atmosphere and its restaurant, in addition to good food, offers a splendid view of the city. It is classified as a four-star hotel. Its location makes it easy to get to the airport. The Welcome Hotel Frankfurt is one of the hotels that offers a spa, with a Finnish sauna, as well as wifi connection in all its facilities. Its rooms are comfortable, with flat screen TV and safe. It has beautiful views of the city and access via a direct tram. Visitors can taste local and international food in its restaurant. But, users also have options such as small hostels, rooms and guesthouses available in the more central areas of the city and in the traditional neighborhoods.