Berlin is always at the forefront. No wonder it is one of the most important cultural capitals in Europe. The number of museums it has, about 365 in total, gives a person to visit a different one for each day of the year. As if that were not enough, there are a number of events on the agenda in theatres, galleries, concert halls and libraries, which can delight a visitor who is eager for this kind of experience. In this tourist map we offer you details to tour and know the capital of Germany, a city that has the distinction of being the “district dedicated to art and antiques”, a title it holds since 1841.

There are almost eight hundred years of history in the 892 square kilometres of the tourist city of Berlin. Founded in 1237, the city was the capital of the kingdom of Prussia, the Weimar Republic and was later divided into two parts, one area belonged to the capital of the German Democratic Republic and the other to the Federal Republic of Germany, separated on both sides by the Berlin Wall. Currently it is the city with the highest population density in Europe, with three and a half million inhabitants. There is always something to do here, at any time of day and any day of the week. From cultural shows, visits to monuments and architectural jewels, walks through popular markets where there is also a wide range of cuisine, as well as walks to beautiful natural sites. This is the city where five rivers run, the Panke, Havel, Dahme, Esprea and Wuhle. 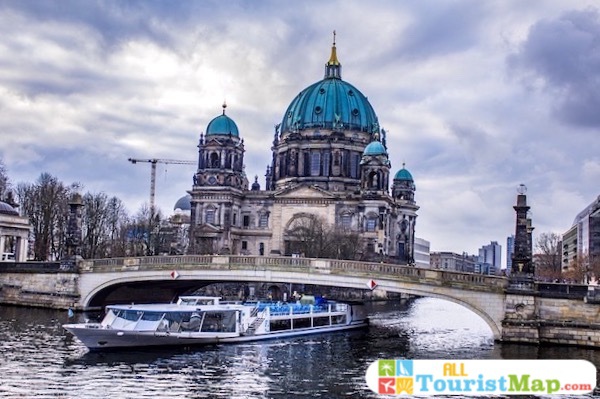 The tourist attractions of Berlin go beyond its network of museums, which are worth noting were declared as cultural heritage of humanity. Its winters are cold, with long nights and very little sun, low temperatures, which can fall to -7 º, are the norm because they are generated by the icy winds from Russia, which also causes heavy snowfall. But, the city compensates this with summers of pleasant and humid temperature. Walking around the city implies seeing an amalgam between modernity and the past, between the everyday and the extravagant. This is a metropolis that shines despite a past in which its inhabitants suffered the horrors of Nazism and World War II, as well as an anguishing separation that lasted twenty-eight years due to the foundations of a wall. But, Berlin went further and knew how to overcome, to shine with art, life, the best of beer and a gastronomy that privileges the best of Brandenburg and to take advantage of a dark history, to shine with own light in Europe.

An afternoon of relaxation in a beautiful, green nature park, of which there are many in Berlin, on the banks of one of the five rivers that run through the city, is not a utopian scenario but one of the many attractions of Berlin. A lot of art, a lot of culture, a lot of history to see and to tell, from putting your hands on the Berlin Wall, known by them as the wall of shame, to knowing imperial palaces that collect the history of kings, nobility, elite and power. Go to nightlife venues such as bars and clubs or dine in beautiful restaurants. From ancient monuments to tourist places that remind us of more recent events in the 20th century. Everything is possible in Berlin, in fact, visiting this tourist city can become one of the most enriching experiences.

What to visit in Berlin

There are still traces of the Berlin Wall. They remain to remind us of the history of a 155-kilometer, 3.6-meter-high infrastructure that, for twenty-eight years, not only separated people, but also diametrically opposed ideologies. In the vicinity of the wall you can also see Checkpoint Charlie, one of the access routes to the east of Berlin and which also served as an escape zone for inhabitants of the German Democratic Republic. In the place there is a museum that tells the history of the wall, which now only stands for one kilometer, as well as stories of those who tried to overcome the barrier and cross it. You can also see the murals that several artists from around the world made for what would later become the East Side Gallery.

If anything gives way to modernity or the new Berlin, it is the Brandenburg Gate, which is seen as the gateway to German reunification. It is located right next to the Berlin Wall and is ideal to visit in the middle of a sightseeing tour of the area. This monument is located in the so-called “no man’s land” that exists between the wall and the police boxes that watched over the enforcement of the isolation between the two parts of the city. This monument was built towards the end of the 18th century. The Quadriga, a characteristic element of the gate, was expatriated by Napoleon in the early 19th century when he took it to Paris. However, this element took its rightful place again in 1814. In 1956 it was rebuilt after the Second World War when it was severely damaged.

Kaiser-Wilhem-gedächtniskirche is the symbol of the devastation of World War II in Berlin. What was left of this beautiful religious building was preserved, without being restored, to remind both locals and visitors of the consequences of the war, which brought centuries of history, affection and knowledge to a halt. After the bombings, what was left of it was a tower, which remains intact and the authorities refused to restore it to take it as a symbol. At the top of this tower is the bell tower, also known in the country as the bell of freedom and visitors can access it daily, from nine o’clock in the morning.

Of all the squares in Berlin, one of the most important and significant is Alexanderplatz, located in the center of Berlin. When Germany was divided, the communists who ruled the GDR took it as a bastion and left their mark there. From there, you can now see the TV tower, built in the sixties of the twentieth century. There are viewpoints there that provide beautiful panoramic views of the city, as well as a number of restaurants. In the vicinity of the historic Alexanderplatz there are monuments, old buildings, shops where you can buy a lot of products, the city hall, the Berlin dome and the cathedral.

The 365 museums that Berlin has make up the most impressive cultural network in Europe. This earned it the declaration of World Cultural Heritage by UNESCO. All these buildings formed an island where there are exhibitions of all kinds, from history, art, music, theater, film, natural sciences, communications, ethnology. Also those dedicated to continents, the Cold War, the Holocaust, galleries with art exhibitions and all the artistic movements, gastronomy, technological advances, among others. All these options make a visit to them, in itself, a separate agenda in the German capital. Among these exhibitions are: the Old National Gallery of Berlin, with the largest collection of works of the nineteenth century; the Altes Museum, which is the oldest of all and displays various Prussian pieces; the Neues Museum, which, despite its name, exhibits prehistoric and Egyptian pieces.

The cathedral of Santa Eduvigis opened its doors for the first time in 1773 and from there it had uninterrupted activity until 1943, when the bombings of World War II devastated it and it was possible to achieve its reconstruction in 1963. This Catholic temple dates back to the 18th century and was commissioned by King Frederick II The Great, King of Prussia. It was built in honor of St. Hedwig of Andechs and the Silesian Catholic immigrants who came to the city at that time. The architectural style under which the cathedral was built is the neoclassical, as it tries to imitate the pantheon of Agrippa in Rome. This style is rare in the Berlin city.

Berlin’s cathedral is also known as the dome of the city and the style that dominates its architecture is the neo-baroque. It is an evangelical temple that measures 114 meters long and 116 high. In the beginning it was thought as a great Protestant temple, which could be of equal or greater influence than St. Peter’s Church located in the Vatican. But it remained as one of the most powerful structures of the city in terms of architecture and size. No doubt one of the places worth visiting in the German capital.

The Holocaust Tower and the Garden of Exile are part of the Jewish Museum in Berlin. The garden is a park that emulates the foundation of Jerusalem and consists of about forty-nine cement pillars. For its part, the Holocaust Museum displays documentation of the victims of the Nazi Holocaust and, in general, the Jewish Museum has galleries that show art and objects that tell first hand the history of Jews in Germany, not only during the Holocaust but comprises about two thousand years of history, including modern times.

The Tiergarten park is the main natural park in Berlin and one of the main parks in Germany. Its location makes it an ideal place to visit since it is located in the center of the city and, in itself, forms a district. Walking, doing sports activities, having a picnic or just reading a good book, are part of the activities that can be done in these natural facilities that make up one of the most beautiful and impressive vegetal lungs of the city. This, together with the zoo, constitutes two of the most comforting natural experiences in the city.

Berlin’s film and literature festivals are world famous. The International Film Festival is organized every February in the towers and palaces of Potsdamer Platz. A jury decides on the annual winners from among the best of the international film world. This is a good opportunity for visitors to be in a festive atmosphere full of expectation and splendor. Also, in the German capital, the International Literature Festival takes place, which attracts the most fervent admirers and followers of prose in the month of September each year. Authors, who come from all over the world, interact with the audience and introduce them to their books. It is also a good opportunity to surround yourself with the cultural city, share experiences, opinions, critics and obtain references of literary trends and what is in vogue in the world of letters.

No less than 860 hotels are available in Berlin. Such diversity also accounts for the variety of prices, which are in line with budgets. But it’s not just about staying in hotels. There are options such as rooms in pensions, apartments and small temporary rental housing, camping areas and youth hostels or family type hostels. Prices vary. There may be rooms that cost $9 a night and five-star hotels that cost $80 a night. But, the average is $30 per night, or at least this is the average rate for about 337 hotels in the city. The Park Inn of the Radisson chain is one of the best reputed, five-star hotels located in the vicinity of Alexanderplatz. There is also the option of staying in guesthouses, there are about 75 available between the center and the east of the city, the prices of this type of accommodation are between fifteen and twenty dollars per night.

Video of Berlin’s most impressive sights