Munich is one of the most beautiful cities with the best quality of life in Germany and all of Europe. This city, located around the Isar River, north of the Bavarian Alps. It is the capital of the state of Bavaria and the third largest city in Germany. In this tourist map we will show you how the history of the Teutonic country can be known through the emblematic places of Munich, as well as basic advices on how to enjoy the stay in a modern and cosmopolitan city, but that maintains an insurmountable connection with its roots and Bavarian customs, as much in its culture, architecture, as in its gastronomy.

Munich fits perfectly into the description of a tourist city, as it has all kinds of attractions for visitors. Art, history, culture, beautiful landscapes, gastronomy and architecture. Its name comes from the old German and means “place of the monks” and that qualifier comes from its foundation by the Benedictine monks, during the time of the Holy Roman Empire. Nowadays, it is a modern publishing and financial center, a cosmopolitan city, located among the first fifteen capitals with the greatest capacity for social and economic innovation, which has dozens of tourist attractions. After Berlin and Hamburg, it is the city with the highest growth and population in Germany, a city that rose almost entirely after being devastated in the Second World War. By the way, the last census showed that the population of Munich is 1,464,301. 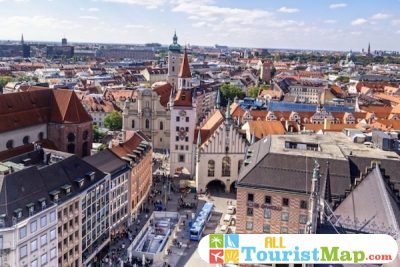 In this context, it also knew how to exploit its tourist attractions from the drama that represented its debacle during the war, so some of its tourist places are related to the history they lived during the world war. Munich is a city built in the surroundings of the Isar River, which crosses it inch by inch, but, inside its structure there are several lakes. Among the most remarkable are the StarnbergerSee and the Ammersee. Its climate is determined by the proximity of the Bavarian Alps, which is why low temperatures are frequent and reach -2° in January, the coldest month. In addition, rainfall comes unexpectedly, although it rarely occurs in winter. However, the summers are usually comforting and the climate reaches 24° in the hottest season. Walking around Munich by public transport is easy as there is a first-class service, although costs can be high. It is worthwhile that visitors, before visiting their favorite tourist places, check the prices for the use of trains, trams, subways and buses in order to choose their best option.

Munich is an unrivalled tourist destination. It managed to become a great destination for visitors after its powerful reconstruction at the end of World War II and it is precisely this stage of its history that boosted it as one of the most attractive and popular cities. It has places of interest where the past and the present converge. Places can range from the most popular such as breweries to places where royalty enjoyed prestige and opulence such as palaces. The beauty of its architecture is complemented by the natural landscapes and the Bavarian gastronomy, recognized worldwide for its excellence. The city has squares, monuments and places of interest that can be visited on foot and without rushing; to enjoy a splendid past with temples in the Gothic style, as well as the symbols that represent the booming economy enjoyed in modern times. To make the most of these interesting tourist attractions offered by the city of Munich we present the following tourist guide with its most emblematic places.

What to visit in Munich

It is not a place, but it is a tradition and, in fact, one of the best known worldwide. Going to Munich during Oktoberfest can be one of the most rewarding and fun experiences for a tourist. This festival is celebrated annually, between the months of September and October and is the most popular festival in Germany since 1810, in fact, each year they close with millions of tourists who are encouraged to enjoy this emblematic celebration. Visitors have the opportunity to taste the best samples of German beer, while they can observe and enjoy parades alluding to the town and its history, traditions and customs. Also of shows, concerts and German and Munich fairs. There is also traditional food including roast chicken, sausages, pigs, oxen and calves.

Marienplatz is located in the historical centre of Munich and has been the city’s main square since 1586. It is the heart of the city, and around it are the new and old buildings of the city hall, as well as the Munchner Residenz, the oldest palace in the city, which dates back to 1385 and has beautiful Renaissance and Baroque decoration. Its name, “Marienplatz” means “Mary’s Square” received it after the construction of the Mariensäule, a Marian column erected in its center in 1638 to celebrate the end of the Swedish occupation. Its streets have pastel-coloured houses and there are beautiful gardens. From there you can see the Bavarian Alps. Despite the cold winter, you can visit about three weeks before Christmas, to participate in the Christkindlmarkt, ie, Christmas market, where they sell Christmas products, food and drink traditions. 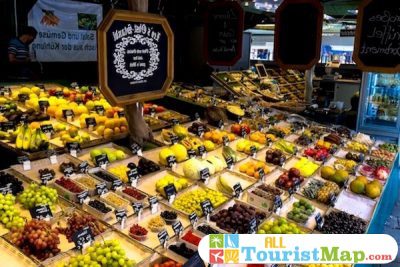 The Viktualienmarkt is an old vegetable and food market, which offers a wide variety of gastronomy and beers at affordable prices for tourists. Located near Marienplatz in the historical centre of Munich, it is now a tourist area par excellence, where there are around 140 small shops to eat and drink at leisure. There are also shops available for visitors to buy typical Bavarian products. For example, there you will find fish, sausages, meat and cheese, as well as local fruit, vegetables and spices. It was originally conceived as a place where vegetable and fruit growers could exhibit and market their harvested products, so it represents the most typical of the local culture. 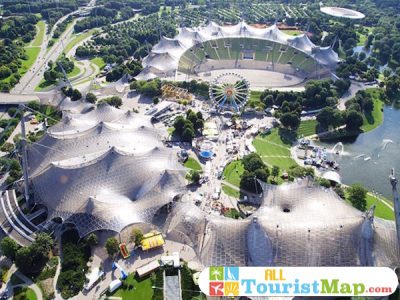 Munich’s Olympiapark is the sports park that was built for the Munich Olympic Games in 1972 and has almost 100 hectares of construction for healthy enjoyment and leisure. Today it is a large and versatile recreational center where visitors, especially those who go on family trips, can perform different activities, from cycling, running, skating, both ice and traditional and swimming. But recreation is not purely sporting, because there are also restaurants available and the locals offer concerts and live shows. All this at affordable prices. Whether you want to enjoy some time at your leisure, as well as guided tours of venues such as the Olympic stadium, the Olympiapark is one of Munich’s tourist attractions that is worth visiting.

Nymphenburg Palace is one of the most representative architectural buildings in the history of Munich. Built in 1664, it served for many years as the residence of the Bavarian royal family, the Wittelsbach family. The word “Nymphenburg” has a beautiful translation: “the castle of the nymphs”. In fact, the Festival or Stone Hall, inside the Palace, contains a beautiful fresco by Joseph Baptist Zimmermann, which shows a circle of nymphs surrounding the goddess Flora. The castle was extended and remodeled over several centuries, so you can see different architectural and decorative styles. It is accessible by public transport and once there, visitors can enjoy the incomparable baroque style decoration and a building with much of the gothic style, as well as impressive gardens. In fact, the beautiful palace attracts some 300,000 people annually.

The Dachau Concentration Camp is one of the symbols of the Munich that emerged after the destruction of the city during World War II. The place was left as a museum to show the world the horrors that the Germans experienced during the tragedy caused by Nazism. Originally, it was not opened to house Jewish prisoners, who arrived later, but German citizens who were enemies of the regime. Visiting this place is a good opportunity to know part of the contemporary history, through excursions and tours that tell the story of what the Third Reich meant and how it was rebuilt from its ashes, to emerge in a modern and prosperous city.

The BMW Welt is the museum that pays homage to the iconic BMW car brand. One of the characteristics of the BMW Welt is the modernity of its lines and styles. It was built in 2007 and is currently one of the busiest places in Munich. Visitors can enjoy the history and evolution of one of the most emblematic companies in the country, enjoy seeing samples of their most important vehicles as well as new presentations and market launches of new cars. One of the most significant things is that access to the museum is free and if the visitor is passionate about cars, he can enter the BMW factory for a cost of eight euros.

The Frauenkirche in Munich

The Frauenkirche or Cathedral of Our Lady of Munich is one of the most important churches in the city. Because of its rapid construction, barely 20 years, the church is characterized by the uniformity of its architectural style. The church has an impressive Gothic structure and is located in the central area of the tourist city of Munich. It became one of the most popular places for visitors, along with St. Peter’s Church, one of the oldest in the town, so old that it predates the founding of Munich. Today, it houses the Archdiocese of Munich and Freising and is the seat of the archbishopric.

If there is one thing that characterises Germany, apart from its historical sites, it is its brewing. The Hofbräuhaus Brewery in Munich is known for producing one of the world’s most famous drinks, and is so old that it dates back to 1589. In addition to the product, of artisan manufacture, one of its main attractions in the premises are the wooden tables, so old that you can read dates and comments of people who were seated there centuries ago. In fact, this brewery witnessed several shocking political events in this region of the world in the 20th century. For example, it was there that the 25 defining lines of the nascent National Socialist Party were presented and it was also there that the Bavarian Soviet Republic was declared in 1919.

Art lovers should not miss the three art galleries in Munich. The Old, New and Modern Art Galleries are among the most emblematic of European art. They display works from the Middle Ages to the modernity of the 20th century.

In Munich there is a variety of hotels, ranging from the most luxurious to the simplest. Tourists have at their disposal about 350 hostels, with different prices, locations and characteristics; everything according to the budget they have and the type of comfort they are looking for during their stay. Prices range from 12 USD per night (two-star hotels) to 87 USD per night, which is the price in a five-star hotel. The Hotel EuropaischerHof is a four-star hotel with comfortable, acclimatized rooms and good service, but only adults are allowed. One of the best known is the Rubi Lilly Hotel Munich. It has four stars and a high reservation rate, so it is convenient to call and ask for room availability.