You want to go on a trip and you haven’t decided where yet? This Tourist Map of Mina Clavero will make you decide once and for all, from the important historical facts, to the most relevant and fun tourist sites, which you will love to visit and which you will undoubtedly want to return to, all recommended by our experts. Pointing out the hotels or cabins that will be according to what you are looking for, of course, always thinking about you, we are sure that we collect the best of this town, taking into account aspects such as: Economy, accessibility and of course quality. Immerse yourself in this trip that we will make you go through containing the best tourist information.

Founded in 1573, shortly after the foundation of Cordoba, according to testimonies and documents collected, as there is no precise data on the foundation of Mina Clavero. The climate in this town is sunny days and cool nights, and thanks to the high concentrations of ozone, one can breathe pure air. There are two hypotheses about the name. On the one hand, it is said that it comes from the name of the Comechingón cacique, and on the other hand, that it derives from an important mine that belonged to the Clavero family, a common surname in the area. Mina Clavero is located at 915 meters above sea level, in the Traslasierra valley, between the Pocho and Achala mountain ranges. It is said that among the Spaniards who arrived there were the Comechingones, the Spaniards began to settle there. From the 20th century onwards, the Italians, French and Germans became established. On May 4, 2005, Mina Clavero was declared the National Capital of the Rally. 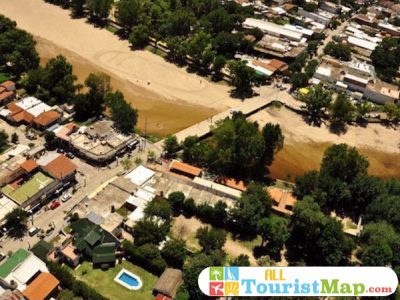 It has 8.087 inhabitants, forming an urban set next to the city of Villa Cura Brochero, a total of 17.553 inhabitants is counted between the two localities. Mina Clavero, is characterized mainly by 14 kilometers of beach, cultural options, extreme sports, waterfalls, spas, fishing and its night life. In the Quebrada del Condorito National Park, you can see bird sightings. Its tourist infrastructure is important, it has one, two, three stars hotels, cabins, rental houses, camping. There are several options for entertainment, bingos, casinos, theater, among others. In the Historical Center of Mina Clavero, you can find San Martín Square, with regional article stores, street shows, among others. The topography of the terrain makes it suitable for activities such as hiking, horseback riding, 4×4 ride. In summer it is suitable for kayaking in the main rivers of the area.

In this guide you will find the best tourist sites of the town, the places to visit in the city, from spas, rivers, beaches to squares and for the lovers of the excursionism, of the motor, we have activities in the town to overflow of adrenaline, we have diversity, for your tranquility this the spa the Residence, that counts on little depth, ideal for the family as well as the San Martin Square. If you are looking for adventure, there is the Nido de Águila Spa, exceptional for divers. Of course, for the ordinary citizen, it is great for diving from up to ten meters, and for those who love fishing, we have an excellent place.

What to visit in Mina Clavero 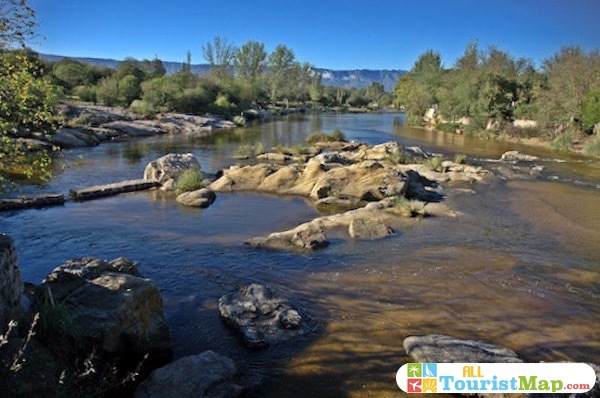 From several streams that flow down from the Pampa de Achala, among which should be mentioned those of Potrero de los blancos, La Cornetita and Cerrito Blanco, which converge, where the river is formed, the site called La Bolsa. With cold and clean waters, it has healing properties. It runs from east to west, saving the fluttering of the mountain range by waterfalls and steep slopes, among which the waterfall that marks the birth of the river is remarkable. It is called Nacimiento del Río Mina Clavero (Birth of the River Mina Clavero), which is visible from far away.  The lower part of the valley when arriving, passes Mina Clavero the city, then it inclines towards the north to join with the Panaholma river that concurs there, next to the Sauces river to which it gives birth. The riverbed of Mina Clavero begins among the rocks of the mountains and only when arriving at the city it forms beaches of golden sands. Along the way, there are important bathing resorts such as the Municipal de Mina Clavero, Nido de Águila and La Toma. 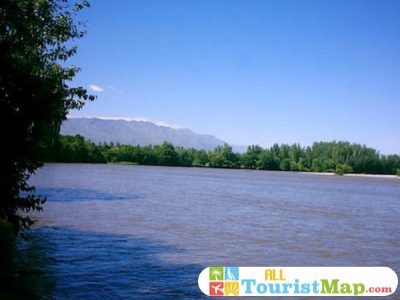 The rivers, the Panaholma and the Clavero, give life to an endless number of spas, downstream, where they cross, give birth to the river of the willows, of wide beaches of fine sand that follow one another along its entire course, until it flows into the La Viña dam. Parking is charged in season, it is possible to find sellers of cakes, ice cream. It is accessed from Villa Cura Brochero and Mina Clavero. It has a length of 9 kilometers, recommended for families. 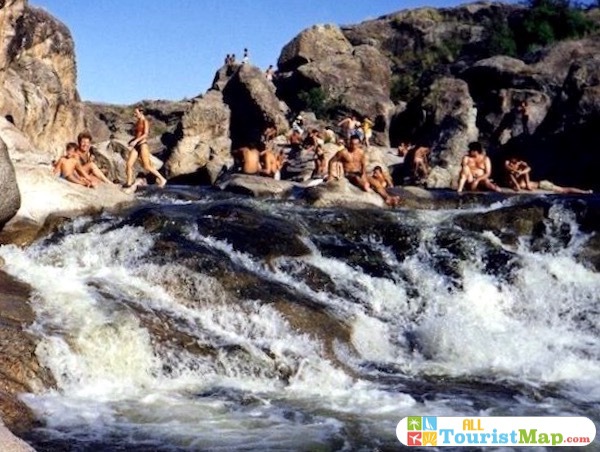 Located only 1500 meters from Mina Clavero, mainly it is a place for adventures, is easily accessible you can access the parking lot or simply leave the car outside, to access when you arrive, you have to walk about ten meters, at the base there is a parador where to eat and clean bathrooms, With natural pool a stone diving board of more than ten meters high, crystalline waters, it is not of more saying that it is beautiful, in this place the river Mina Clavero is boxed between walls of granite modeled by the erosion of the water and air, giving origin to a natural pool that in some sectors surpasses the 6 meters of depth. For divers the site is ideal. Parking is charged at the Parador. 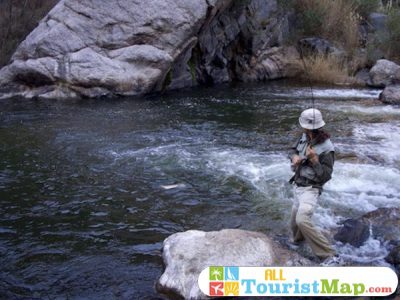 They emphasize their services in a personalized attention and with a varied menu of options, in unique environments for you to have the best time, taking an unforgettable memory of your visit. They are fishermen with a soul and fierce defenders of the environment. They have the delicate patience to make your fishing day unforgettable. They offer tailor-made excursions. In this type of program, they offer the possibility of visiting places outside the traditional fishing circuits. You will visit incredible places that very few people go to, and fish in crystalline waters with great numbers of trout. You will wade the streams in search of the pools with rainbow trout, enjoying a landscape that will be there just for you without experiencing the impressive intensity of the trout. These will be days of full fishing, from early to very late, the time of majority activity, without worrying about meeting other fishermen and enjoying a unique exclusivity in the river and using all possible techniques. The fishing days can be several days with nights in, accommodation, mountain house, breakfast, meals, fishing guides, horses. 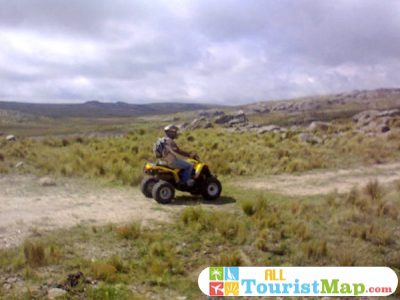 The Cajones and the Elephants 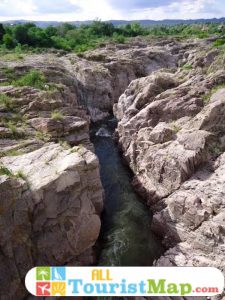 Los Cajones and Los Elefantes are geographically located in the valley of Traslasierra in the town of Mina Clavero, 144 kilometers from the city of Córdoba, in the department of San Alberto. That initially is highway to Villa Carlos Paz, crossing the sublime Camino de las Altas Cumbres. There are the so-called Cajones, on the river of the willows, formed by rocks with vertical walls, whose closed water basin forms pots and rapids of different depths. In the caissons at the end, where the Los Sauces River basin opens up, rocky formations appear on both sides that resemble the figure of two elephants, through which he forms a small waterfall, the water flows thus forming where it continues its journey, and then form long beaches of golden sand. Every season, Los Cajones and Los Elefantes summon thousands of tourists who come to the City of Mina Clavero and the Traslasierra Valley to enjoy their beautiful sceneries and their peaceful river. The waters of the Mina Clavero River are known for their mineral properties and, according to the testimony of the dwellers of this town, for their virtuous healing. This goes back to about 100 years ago, when the water of this river was carried on the back of a mule to the City of Córdoba, as medicine to cure the sick, since it was said that it had therapeutic properties that are still attributed to them today. 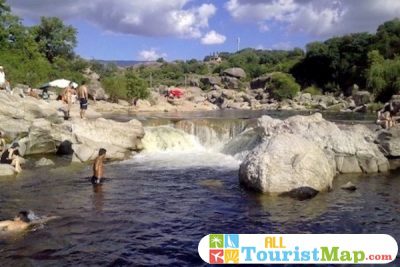 900 meters from the Central Bridge of Mina Clavero, the Hotel Residencia Serrana is located at the foot. The river is shallow and has long beaches, ideal for children and family. There are always street vendors, as well as many people since it is a very busy resort, access is easy, parking is priced, contrary to the eagle’s nest, which is more adventurous than for the family. This one is suitable for any age. 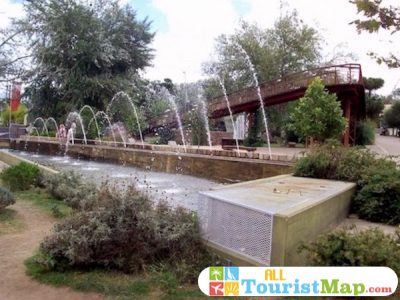 Ideal to walk the dogs, people who visit this busy square comment that it is one of the main activities to do, besides, there are street shows where you can see the best of Mina Clavero’s talent, there are also shops with local articles, the square has a monument to General San Martin. 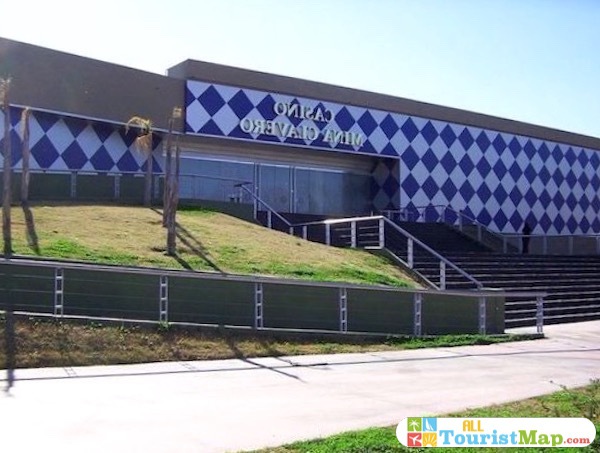 Excellent attention, comfortable to play, splendid service of the bar, this is how the casino of Mina Clavero is described, that now has a terrace more accommodated according to the clientele. With a stunning entrance this casino has the best betting machines, the best drinks. The best example of saying or making believe that you are in Las Vegas, if you pass by Mina Clavero and you are a betting lover, without a doubt we tell you to visit this casino.

Map of Hotels in Mina Clavero

The map of hotels in the town of Mina Clavero is very diverse, those that we will point out are the Hotel de la Cañada, is a three star hotel that has nothing to envy to any other, particularly has; Buffet breakfast, Wi-Fi throughout the hotel, rooms equipped with a fridge bar and safety boxes, 32′ LCD TVs, air conditioning, landscaped garden, laundry service, tennis court, games for children in the park, parking, spa service, dry sauna, Jacuzzi and treatments, without doubt is one of the best hotels in the town, located on San Martin Avenue. Another hotel is the Casablanca; it is similar to the one in La Cañada, it has luminous rooms and some of them have a mini bar.

Video of Mina Clavero, the most impressive tourist destinations