If you decide to spend a few days in this city considered the main beach resort in Argentina, which has 10 miles of beaches that run from La Perla in the north, the following tourist map of the city of Mar de Plata offers excellent tourist information of this place that is ideal for families, where you should prepare to see many people regardless of the beach, particularly during the summer. A city that was once an enclave for a very select group, now attracts countless local, foreign and all kinds of visitors.

It is located in the southeast of the province of Buenos Aires (Argentina), on the coast of the Argentine sea. It’s a port of the utmost importance and in summer time its population can increase by 311%, this city was founded with its current name on February 10, 1874. Its climate is temperate oceanic, with abundant rainfall throughout the year. 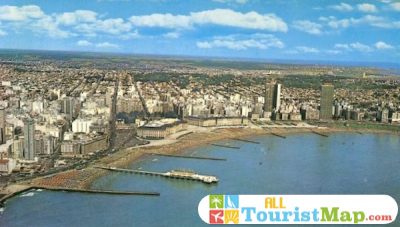 The main economic activities of this city are fishing, tourism and the textile industry. The oil and cereal ships complement the main activity of the port, which is fishing. The city also has a naval base for submarines. Among the great variety of industries, those derived from construction, mechanics, horticulture, and metallurgy also stand out. It is also an important center of education, it also has open television channels and cable television, three AM radios and a varied offer of more than fifty FM stations.  The city of Mar del Plata, is the head of the district of General Pueyrredón.

In the following article we have designed for you an excellent tourist route to help you discover the tourist sites of the City of Mar de Plata, “La Rambla”, “Las Recovas”, “Plaza seca” and “Plaza Colón” are a National Architectural Urban Complex and are part of the National Historical Heritage of Mar de Plata, here we will share options about what to do and what to see in such city, which is the main town located within the coastal tourist corridor of the Province of Buenos Aires, on the Argentine Sea. When we visit a place for the first time, many questions come to our mind, such as  Which places can we visit? Where can we eat? If there is a tourist bus, even where can we stay? these are just some of the many questions that need a good answer, which is why we have designed this wonderful route.

What to visit in Mar de Plata

View of the Torreón del Monje 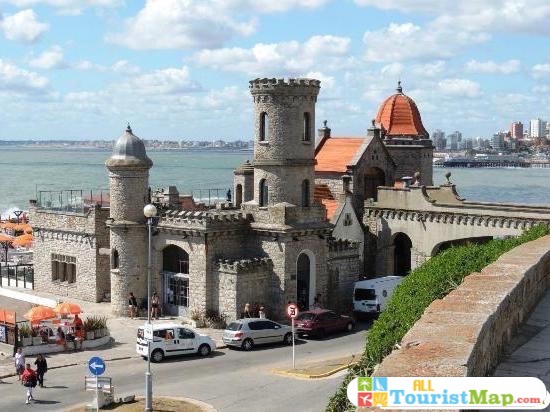 It was inaugurated in 1904 and is one of the obligatory references of the Mar del Plata coast. It was remodeled in 1929. It is located in Paseo Galindez, on the Punta Piedras ravine. Inside this building there are exhibition rooms, spa facilities, cafeterias and a viewpoint, and inside there is a cafeteria and a restaurant, which makes it a must for tourists. At its entrance you will be greeted by a semi-covered porch with three arches and a stone column. Above this space, an octagonal tower with its curved spire of Norman tiles. Among the materials it is built with are stone, rustic plaster and brick. The Tower of the Monk is a National Historical Heritage site and was declared of Heritage Interest. 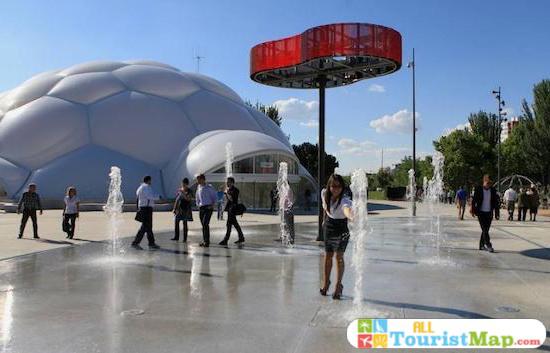 This square is located in front of the Casino, on the Boulevard Marítimo of the city of Mar del Plata. The obtained main one at the moment of this construction, was to offer a complete vision of the Casino and Provincial Hotel to the city. Its construction had prolonged managements thanks to the fact that in that space was located previously what was called the “115 block”, which had to be demolished for the construction of the same one.

In the center of the square is a large fountain of 40 meters in diameter with dancing waters programmed to accompany six songs by the Argentine musician and composer Litto Vitale, each one was composed especially for this permanent show. The names of these songs as well as their composition are closely linked to the city fort: “Fuente al mar, Mar tranquilo, Mar picado, Movimiento, Mar abierto y Mar en Tres”. In Plaza del Milenio many historic palm trees were located, 15 to be exact donated by city residents, which are from the Playa Chica Hotel, the municipal camp of the Lobería stream, and from Gaboto Street planted in 1935 by Alfredo Diminutto.

Cathedral of Saints Peter and Cecilia 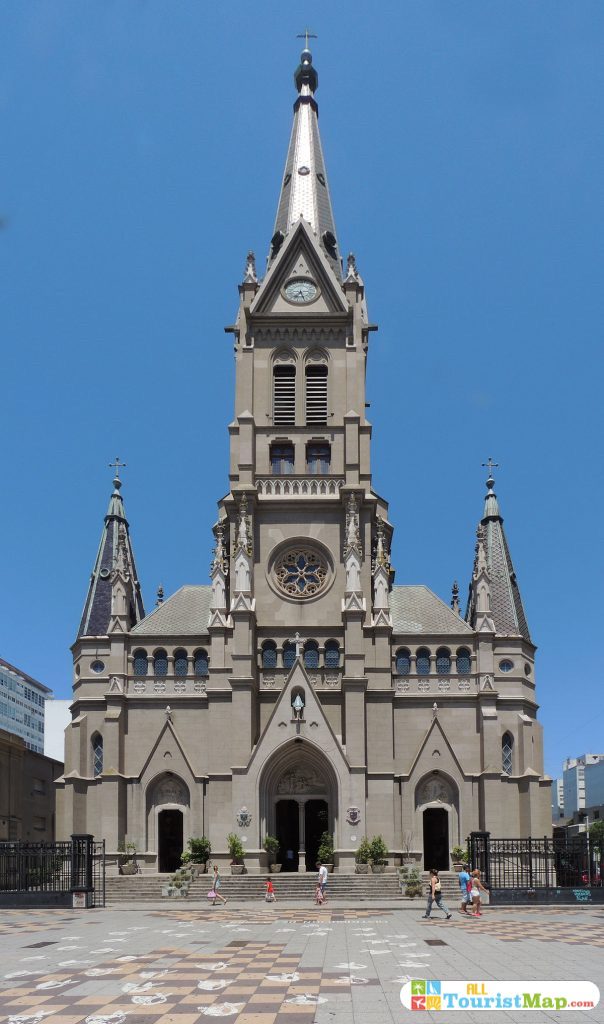 It’s the main Catholic church of Mar del Plata, declared National Historical Patrimony, which was inaugurated on February 12, 1905. With the aim of building a temple, the work was directed by the engineer Pedro Benoit, maintaining a particular style. It was declared of patrimonial interest. All the stained glass windows of the cathedral are from France and donated by families from Mar del Plata. The central chandelier was brought from the Bristol Hotel in the city. Its floor is made of English mosaic and the ceiling is made of glazed tiles of different colors, all European. Its organ is of Italian origin and was built the same year the Cathedral was founded, with three manual keyboards with a total of 36 registers and 2500 pipes. In the high altar you can find not only the relics, but also a piece of the Cross of Christ, the remains of Holy Martyrs and the remains of Monsignor Enrique Rau, the first bishop of Mar del Plata. Inside the Temple, there is a replica of La Piedad. It is the third largest cathedral in the province of Buenos Aires after the Cathedral of La Plata and the Basilica of Luján. 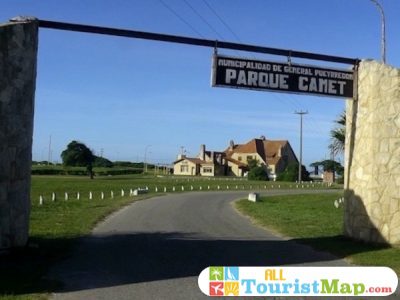 It is a large municipal park that has 140 hectares, with eucalyptus trees and a lake where the famous stream “La Tapera” flows into, it is wooded with fireplaces, games, horse rental and rolling hills, among others. It is located to the north of the city. It is also a recreation area, although bathing is not allowed. It also has courts to practice different sports. 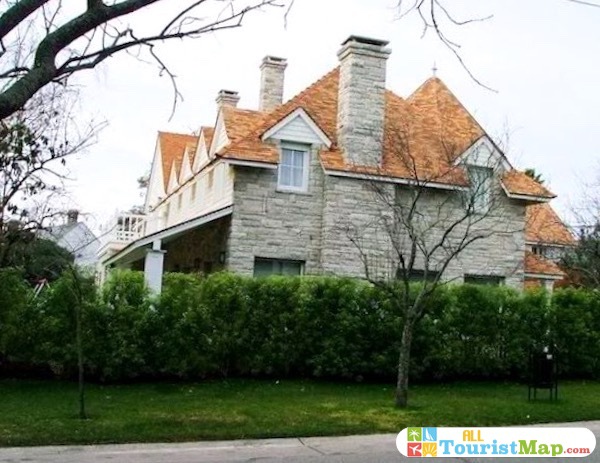 It is a very important neighborhood in Mar del Plata, and that is the main residential neighborhood, its name is a tribute to a wealthy Salteño who had a villa built with trunks of quebracho and lapacho in 1938. Later on, large houses of similar characteristics were built around it, giving it an aristocratic air. 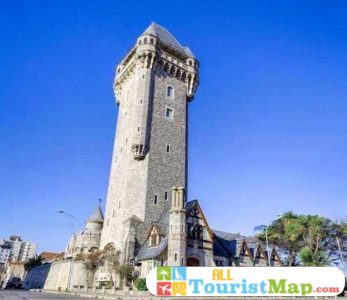 It belongs to Obras Sanitarias Sociedad de Estado, built in 1943 by the architect Cornelio Lange (an employee of OSN, whose project was chosen through a competition in 1939) in the Tudor style. The building has a height of 88,387 meters. Inside there is a 500m³ tank, a house and a viewpoint. Inside, there is a large interior staircase with 194 steps and an elevator that, when it reaches the viewpoint, is located at the top. The tower is located on the highest hill in the city (Stella Maris). The tower has many machines, which are in operation since 1943. 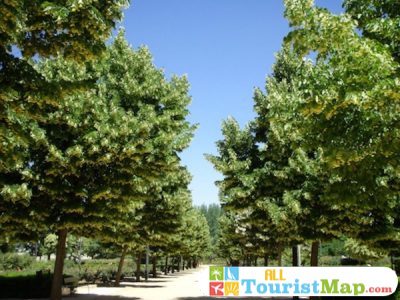 Also known as the Diagonal Pueyrredón, which is a short central walk that leaves from the Plaza San Martín, with two paths separated by large stonemasons in which linden trees are planted. In the seventies it inspired the song called Avenida de los tilos, which was sung by Luciana, to the music of Marco Montoya, on a poem by the poet María Wérnicke. The song became the first to be sold in the country and is considered by some critics as one of the most beautiful in the history of Argentine pop music. 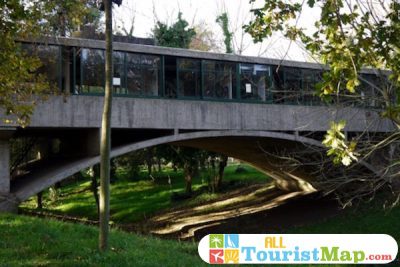 Also known as “Casa sobre el Arroyo”, it is located between Matheu, Quintana, Funes and Guido streets. It was built for the musician Alberto Williams, in 1943 by the architect Amancio Williams and his partner and wife Delfina Gálvez, together with the collaboration of the engineer Carlos Teglia, with the only objective of demonstrating that the ground can be left free, so that the construction can be seen not only from its sides but also from below. On the other hand, the atmosphere chosen by the architect is totally natural and is divided by the hollow of a stream.

No stucco, plaster, plaster or paint was used for its construction, which could mask the quality of the work itself, and its construction was made difficult by the scarcity of materials due to the Second World War. It is important to mention that its addressee, Alberto Williams, never occupied the house, which housed a commercial radio station for many years. In 2012, it was also acquired by the Municipality of General Pueyrredon, with funds provided by the National and Municipal governments.

Interior of the Colon Theatre in Mar del Plata 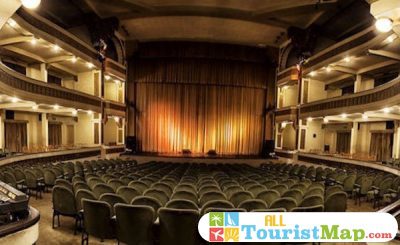 Formerly, this theater belonged to the Spanish Society of Mutual Aid and currently belongs to the Spanish Club, the Colon Theater in the city of Mar del Plata was built by Martin Marco, according to the project of Architect Angel Pascual, in 1924. At the beginning it was built with the aim of providing the city with a theater of greater importance than those that already existed. At present, the hall is managed by the Municipality of General Pueyrredon. It was declared of patrimonial interest by means of the ordinance 10075/95 of the deliberative council of General Pueyrredon. 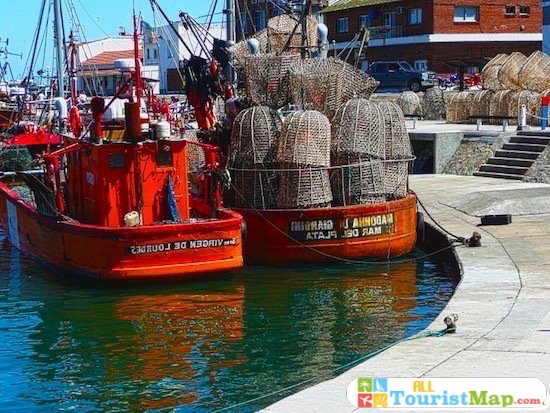 The Fisherman’s Bank was declared National Historical Heritage and is located in the Port of Mar del Plata. This is a typical place that houses dozens of fishing boats. These boats usually leave early in the morning to fish and return at sunset. In the afternoon there is a fish auction, and it is possible to buy them directly from the boats.

Map of hotels in the city of Mar de Plata

Mar de Plata has a total of 56.771 hotel accommodations of different characteristics for the reception, comfort and enjoyment of their tourists, today we offer a map of hotels in the city of Mar de Plata, to help you choose the one that best suits your tastes and needs, we recommend The PRINCE HOTEL, which offers the best service and comfort in the heart of the city, providing an ideal place to enjoy the city of Mar del Plata in their trips of rest or business meetings, their personalized attention ensures excellence and warmth of the stay of each tourist.

Video of Mar de Plata, the most impressive tourist destinations