Santa Marta is the oldest city in Colombia and the second oldest in Latin America. To visit it is to arrive at a site blessed by nature, with beautiful beaches, incredible mountains and an impeccable architectural heritage, since it was founded in 1524, on the shores of the Santa Marta Bay, on the slopes of the Sierra Nevada de Santa Marta. In this tourist map we unveil a Caribbean paradise, preferred by many travelers looking for beautiful landscapes, culture and a land full of heroic caste, not in vain was declared as a Tourist District, Cultural and Historical Colombia.

Santa Marta is essentially a tourist city. It is one of the most important cities on the Caribbean coast of Colombia and has a variety of landscapes to delight its visitors. In Santa Marta converge the most spectacular sites of that region of the country, a sea surrounded by mountains as beautiful flanks in which you can make ecotourism. In its historical center there is a beautiful Romanesque architecture expressed in religious temples and a colonial air that has been maintained despite the advance of time and the arrival of modernity. The city, in addition to its undeniable place as a Caribbean paradise, has a fundamental historical importance, it is the place of the Quinta San Pedro Alejandrino, where the Venezuelan hero with a world-wide legacy, Simón Bolívar, died in 1830. 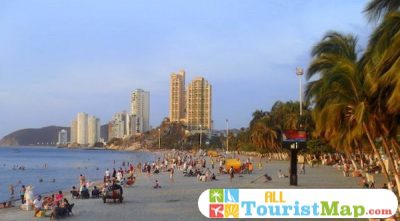 The tourist attractions of Santa Marta begin with a large number of beaches, most of them with white sand and clear, calm waters. Its geographical location, between the Sierra Nevada de Santa Marta and the Caribbean Sea, makes it the recipient of some mountains and peaks classified as the most beautiful in the country and one of them was classified as the highest in the world at sea level, with a variety of flora and fauna. Its geographical variety offers the tourist the most varied experiences, including beaches, rivers suitable for spas, national and anthropological parks. As a coastal city surrounded by mountains, its climate varies from humid to semi-arid with a wide biodiversity, with temperatures ranging between 28 and 23 degrees Celsius. The city, which is an important port in the country and one of the deepest in Latin America, receives a large number of commercial vessels that help to boost the local economy. By land, Santa Marta can be reached through the Troncal del Caribe highway, which connects it to Rioacha on one side and to Barranquillas on the other. It is also reached by air through the Simón Bolívar International Airport, sixteen kilometers from the city, and although the offer of flights abroad is very limited, it has the option of charter flights.

Beach, sun, sand, mountains, art, history, pre-Hispanic culture and architecture from the Republican era, all on the shores of a bay, that means choosing Santa Marta as a tourist destination. Visit the Cathedral Basilica of Santa Marta, where the remains of the Spanish conqueror and founder of the city Rodrigo de Bastidas lie, as well as the Quinta San Pedro Alejandrino, where the Liberator Simon Bolivar died on December 17, 1830. The stay can be accompanied by the enjoyment of a Samarian gastronomy based on seafood, tropical fruits, rice with coconut, cocadas, meats brought from nearby municipalities and the specialty of the place based on unripe bananas, known as guineo, with which the popular cayeye is prepared, or yucca which is used to make scones and is a basic ingredient of fish soups. The city and its spas are the ideal place to practice water sports and especially diving, since the sea offers a great diversity of marine life that is, at the very least, splendid and beautiful.

What to visit in Santa Marta 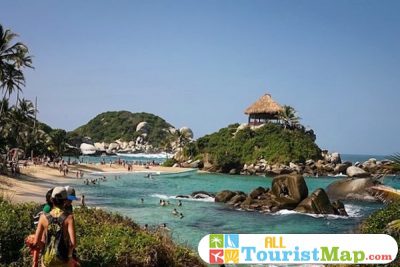 The Tayrona National Park is one of the largest natural parks in Colombia, located 34 kilometers from Santa Marta. Its beaches are its main attraction, since they offer an excellent option for rest, recreation and diving. But it also shows the biodiversity that lives in the Sierra Nevada, with tropical forests and an important archaeological heritage that shows the settlements of the Tayrona civilization, one of the most important in pre-Hispanic culture, which inhabited Colombia for thousands of years. In this park you can go for walks and explore the area with guided tours through tourist companies. 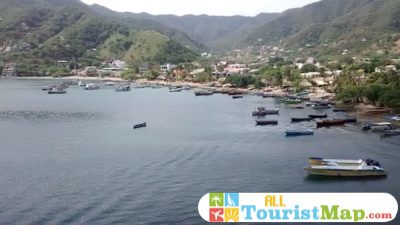 Playa Taganga, between Santa Marta and Tayrona National Park, is a fishing village whose waters are perfect for diving, no matter what level of knowledge you have about this discipline and even get certified in a simple way. It is surrounded by mountains, cetacean vegetation and small trees. From there, tourists can access Tayrona by sea through boats and, while making the trip, they can appreciate paradisiacal landscapes such as coves, islets, hills, points and all the maritime geography that is in the continental strip of Santa Marta.

The Basilica Cathedral of Santa Marta was the first built in Latin America in 1765 by engineer Juan Cayetano, during the mandate of governor Andrés Pérez. This constructed under the Renaissance style in a city that from 1543 and during approximately two hundred years was under the siege, the plundering and the assaults of English pirates. Inside its spaces not only the Catholic faith is revived, but it keeps the remains of the founder of the city, the Spanish conqueror Rodrigo de Bastidas, brought from the Dominican Republic in 1953; and it also contains a chest with the entrails and heart of the liberator Simón Bolívar, remains that were moved there in 1930.

The Parque de Los Novios is in the centre of Santa Marta, a short distance from the historical monuments. This site represents one of the most interesting places in the city, where you can walk as it has beautiful streets that were restored, has a variety of restaurants, cafes, bars and some night spots that can satisfy the most varied tastes. During the day, visitors can take the entire tour to admire the infrastructure and have a good time. At night, it is the ideal place to have dinner or share a drink in one of its pleasant venues. 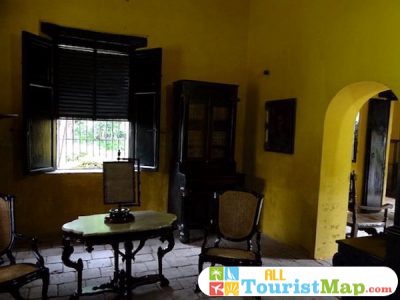 The Quinta San Pedro Alejandrino is a beautiful Republican-style building located in the Mamatoco neighborhood, which is famous not only for its architecture but for being the place where the Venezuelan hero Simón Bolívar lived his last days and died, known as the Liberator after his feat of independence of seven Latin American nations. It was a hacienda founded on February 2, 1608 by Francisco Godoy y Cortesía and today is considered a national sanctuary. Nowadays, this building is a museum that attracts visitors not only for its architectural and historical interest but also for its cultural one. The tour to this site became one of the main activities for visitors.

The Casa de Madame Agustine is a colonial architectural jewel that was built in 1745. It is located in the historical center of Santa Marta, on the corner of Calle 17 or Calle Real with Callejón Don Pedro Salas. Inside these facilities lived for a long time a French woman, known as Madame Agustine. The story goes that this woman was romantically related to the doctor Alejandro Prospero Reverand, who attended the Liberator Simón Bolívar during his last days. At present, this is the site where the Santa Marta Promotional Tourist Company operates. 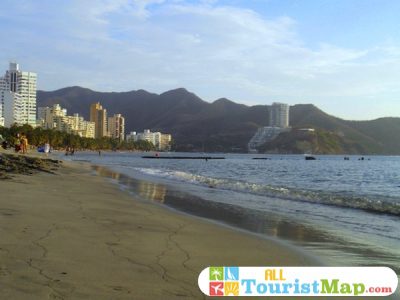 El Rodadero is one of the most visited resorts in Santa Marta, it is among the first places of preference for tourists. The beach is located five kilometers from the center of Santa Marta, in the Bay of Gaira. El Rodadero is considered a symbol of nature and tourism in the city and has a reputation for being a high quality resort on the Colombian coast. Here it is also a place of meeting and recreation because it has many restaurants and at night it is the place where the party, the joy and the rumba are concentrated in the coastal city, since it has many bars with live music and places where the best parties of Santa Marta are held.

Aquarium and Museum of the Sea 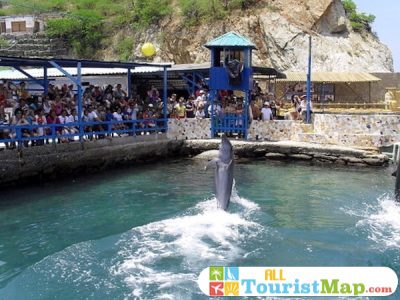 In the Aquarium and Museum of the Sea you can learn more about the Tajrona culture as one of the main pre-Columbian cultures that stood out for being great navigators and left a historical legacy in the Caribbean. In the part of the Museum dedicated to them you can access to archaeological pieces with a lot of symbolism such as bones, vessels, carvings, necklaces and stones like jades. There are also sections that display pieces of different marine species, fish of different sizes, nautical elements and a special area dedicated to the Titanic boat, which highlights replicas of the dishes they used, publications and pieces of the boat. 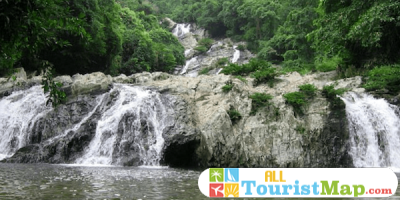 The Quebrada Valencia is one of the most beautiful rivers in the vicinity of the Tayrona Natural Park and is considered an important natural reserve where you can spend the night, make ecotourism and also do bird watching, as well as appreciate its wide variety of flora and fauna, among which are trees with heights above twenty-five meters. This tributary, which serves as a spa for tourists, consists of a series of waterfalls that are very high and in the winter season the water is abundant, in whose descent are formed some natural pools or wells in which a dip is really rewarding for how refreshing it is. This ravine has its mouth in the sea.

House of the Customs

The Casa de la Aduana is the only historical site in Santa Marta that had the privilege of having the Liberator Simín Bolívar both when he was alive and in a burning chapel after his death. This architectural structure is the first made by the Spaniards in America and is located in the historical center of Santa Marta, where this city was founded. Over time it has withstood the onslaughts of history, from fires to pillage by pirates and corsairs who invaded the Samarian coasts for more than two hundred years; and it has also performed various functions over time. It served as Government House, then as a customs consulate and as a Chamber of Commerce. Currently, the Tayrona Gold Museum operates in this space, which displays a collection of gold work and other objects of historical value, made by these pre-Columbian Indians who inhabited the Sierra Nevada.

Santa Marta is a tourist city and many of its areas, which are of interest to visitors, have good accommodation options that cater for a variety of budgets. However, the recommendations point out that Rodadero is the best area to stay, both because of the offer of hotels and inns and because of the characteristics of the place, since it offers several services that are necessary. It is an impeccable place that provides public safety, with the ease of obtaining pharmacies, restaurants, shopping centers, sale of handicrafts and souvenirs, as well as being a place of tourist interest where there is direct access to beautiful beaches and nightlife. The hotels provide good services, with comfortable rooms, basic services and a swimming pool. In terms of hotel establishments, one of the most recommended and sought-after by users is the Hotel Porto Bahía, a three-star hotel whose average cost of rooms per day is sixty dollars. There are also options such as guest houses, pensions and temporary rental apartments.

Video of the most impressive tourist sites in Santa Marta