Cartagena de Indias lives for tourism and that is why it is Colombia’s letter of introduction to the world and is one of the most important destinations in Latin America. In this tourist map you will be able to know about a city that vibrates to the rhythm of the sun and the mixture of ethnic groups, with unique landscapes and a history that not only marks Colombia but also Latin America. The city, which mixes the most representative of Spanish colonialism through its architecture and modernity to which it evolved as the South American country, is one of the wonder cities of Colombia.

Cartagena is, in essence, a tourist city. This is its main industry and economic source. For this reason, the city vibrates to the rhythm of the activities of recreation, leisure and culture with the realization of many festivals throughout the year. It also highlights the conservation of beautiful historical sites, from monuments, religious architecture and colonial streets, as well as highlighting the natural sites, especially the beaches that are one of the most important attractions. Its strategic location in the Caribbean Sea made it an important reference for trade, both national and international. In addition, the ever-growing construction industry boosted it with the construction of large, modern buildings, avant-garde shopping centers and good public services, which turned it into a town that offers the best of both worlds: modernity and history. Furthermore, it is a meeting place for important political meetings of the continent and is also a World Heritage Site under the protection of UNESCO. 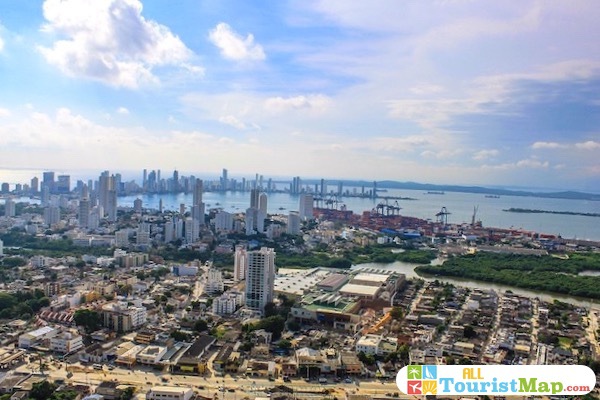 This city is the Caribbean, the sea, the sun, the landscapes and the places that are unmatched, and the people who are willing to serve visitors and show the best of themselves. The tourist attractions of Cartagena are evident as soon as you arrive in the city, founded in 1515 and capital of the Department of Bolivar, from which time it became one of the most important ports in Latin America and river port thanks to the Magdalena River, one of the main tributaries of Colombia. From its fortifications, architectural richness and pre-Hispanic culture, its streets and walls and the stories told in every square and corner, make the trip an enriching experience. Being at the seashore, the average temperature of 20 degrees Celsius in Cartagena makes the city warm, but with constant breezes, which makes it a pleasant climate. It is important to emphasize that visitors should protect themselves from the sun to avoid burns, especially in the months of May and August.

As a tourist destination Cartagena, a bay surrounded by small islands, is versatile and offers many options, from entertainment and leisure to cultural. Historical tourism is one of the main ones, with tours to fortifications, churches, colonial streets that represent the city center, especially the famous Walled City, which offers the best of colonial history and art. But it is also a place to do ecotourism in the beaches, marshes and volcano landscapes, like the Totumo Volcano. Nightlife is also an option in the city, with the large number of bars, discos where it is common to dance until dawn to the sound of Caribbean rhythms and the diversity of liquors with a Latin flavor. Gastronomy cannot be missing and here there is an extraordinary fusion of flavors in which the seasoning of Spanish cuisine, with African and aboriginal, is mixed with dishes based on fish, seafood and tropical fruits that worship the Caribbean.

What to visit in Cartagena de Indias 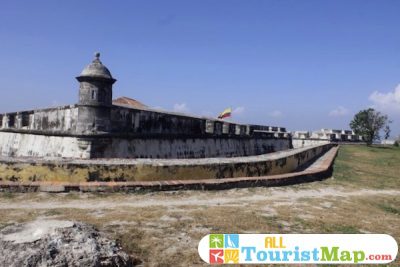 The Walled City, also known as the Old City, is what best represents the Spanish architecture in Cartagena. Located in the historic center, its construction began in 1600 and culminated a century later. It is surrounded by polygonal-shaped bastions, which resemble walls but are not very high and were built to protect the city from possible foreign invasions in order to safeguard its wealth. It is surrounded by many neighborhoods, including Barrio La Manga, which concentrates the largest number of colonial houses. Pie de Popa, site that housed the mansions and large houses of the most opulent and wealthy families in the city and Getsemaní, one of the most representative neighborhoods since it was there that the cry for independence of the city was made in 1811. 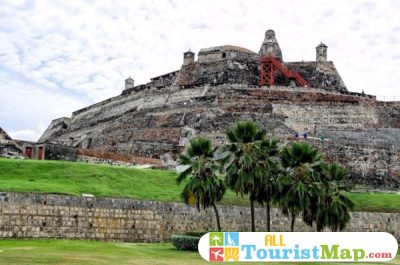 The San Felipe de Barajas Castle is one of the largest military fortifications ever built, not only in Colombia but in Latin America. Its construction began in 1536 on the Hill of San Lazaro and therefore was initially called Castle of San Lazaro. Because of its strategic location at a height that allowed a holistic view of the city, the Spanish could control any attempt to invade Cartagena, whether the corsairs tried to reach by sea, through the bay or by land. Today it is one of the most emblematic sites that is part of the cultural heritage of the region and is a must for tourists who are eager to learn about colonial history.

The San Pedro Claver Convent is a remodelling of a church erected in honour of the saint who gave his life to protect the slaves brought from Africa who arrived in Cartagena, although in antiquity it had two other advocations: that of San Juan de Dios and that of San Ignacio de Loyola. This structure, built in 1580, had a period of decline since it was abandoned for a while. Fortunately for the following generations, it was rebuilt in the following centuries and now has an altar built with marble brought from Italy and a dome designed and built by the French architect Gaston Lelarge. The main altar still has the remains of St. Peter Claver. The facade, carved in stone, is in a style known as “Jesuitical”. 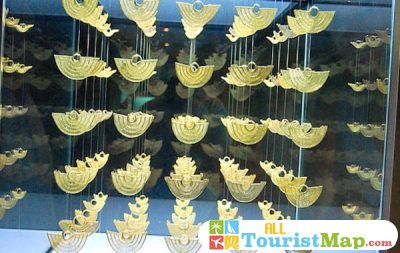 The Zenú Gold Museum is located adjacent to the Plaza Bolívar in Cartagena. There, tourists can appreciate pre-Columbian art in gold, pottery and some bone samples. There you can get to know the Zenú culture, an ethnic group that inhabited Colombia for some four thousand years and that stood out for its constructions and advances in the field of drainage. In the museum you can get to know them through the jewelry and ceramic collections. Visitors can also learn about the Muisca ethnic group, famous for being associated with the legends surrounding El Dorado. There are also important exhibits that tell the story of the Tayrona and Calima cultures. 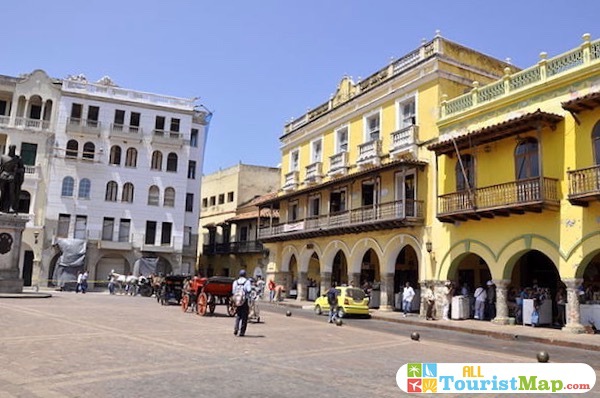 The Plaza de Los Coches received this name because it is one of the main parking areas for horse-drawn carriages. It was built at the end of the twentieth century and its main attraction is the horse-drawn carriages, which are available for tourist rides. This square is surrounded by old houses and mansions built in the sixteenth century, which highlights its wooden balconies and arched doorways. In the center of the square there is a statue of the founder of the city, Pedro de Heredia. On one side of the square is the Portal de los Dulces, a corridor in which there is a variety of shops that offer the best of the sweet gastronomy of the Caribbean coast. 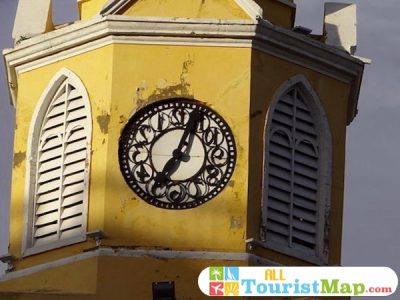 The Clock Tower and Mouth of the Bridge, is the entrance to the Walled City of Cartagena and has been catalogued as one of the most beautiful ClockTowers in the world. Built with a baroque architecture based on stone and with an imposing clock, it was built at the beginning of the seventeenth century as a gateway to the city and then it was rebuilt in 1704, the year in which the baroque gate and some columns in the Tuscan style were placed. The Clock Tower was added many years later, in 1888, to complement this architectural work in the most important and diverse historical area of the Colombian city.

Palace of the Inquisition

The Palace of the Inquisition was built in the eighteenth century and is currently located adjacent to the Plaza Bolivar in Cartagena. It is an emblematic building of the city, and was the seat of the Tribunal of the Holy Office of the Inquisition, the entity in which the trials against the alleged heretics were carried out. It also represents one of the biggest bastions of the civil architecture of Cartagena, it has an impeccable colonial style that impregnates it with great beauty, especially for its stone facade and its wooden constructions, which represent the baroque art. Within this infrastructure, tourists can find a historical museum where the devices used to interrogate and torture those accused of heresy are displayed.

The Cuartel de las Bóvedas is a military construction built in 1798 that consists of forty-seven arches and 23 bombproof vaults. It was erected to protect the royalist troops of Spain and to store ammunition that would serve to protect and defend the walls. Today, a beautiful handicrafts market operates within these facilities, so you can find many souvenirs alluding to the city, jewelry and clothing typical of the Colombian coast, made with materials obtained from the sea. You can also acquire the famous vueltiao hat, typical of the area.

In the Baru Peninsula you can find the most beautiful and visited beaches south of Cartagena, especially Playa Blanca, which is considered one of the most beautiful in all of Colombia. You can get there by boat and when you arrive, you will find beautiful beaches, almost virgin, with white sands and transparent waters. In the area there are also mangroves and coral reefs can be seen. In this peninsula there are small villages, which resemble rather rudimentary villages with simple and very picturesque infrastructures that are home to a small population, reaching at most about ten thousand people 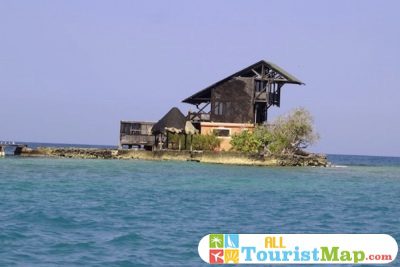 Forty five minutes sailing from Cartagena are The Rosario Islands are a group of 27 islands, which make up the Coral Natural Park, facing the Baru Peninsula. It is one of the most famous coastal areas of the city and its fame lies in the paradisiacal beaches, classified as “dreamy”. The visitors can live together with mangroves, wetlands, reefs and know an extensive marine biodiversity. This area is one of the favorites for practicing ecotourism and having fun with water sports. One of the most visited islands is La Grande, where the three most representative ecosystems of the area converge: mangroves, tropical dry forests and lagoons.

One of the most recommended places to stay in Cartagena de Indias is in the Walled City, since it has the greatest access to the historical tourist areas of the city. But, also, outside these walls the city grew and became modern and, being the epicenter of tourism developed a hotel zone that is located more to the center and away from the historical center, and whose intermediate is the street Getsemaní, which has tourist attraction for its history and infrastructure. But it is also important to note that in the adjacencies of the central zone, in the eastern part, there are slums that are poor and can represent a danger for tourists, so it is recommended not to approach these places. In the coastal area there are many hotels, especially in the Boquilla and Crespo neighborhoods. There are also temporary rental apartments available there, where tourists have the opportunity to stay and have access to food preparation. In the city there is also the possibility of staying in pensions or private houses that offer rooms. Visitors should be aware that accommodation is not cheap and that prices are high compared to other destinations in Colombia.

Video of the most impressive tourist sites in Cartagena de Indias