This village is one of the most beautiful places in Portugal, due to its high landscape content, and guardian of a beautiful heritage where Arab and Roman culture has left important traces on the Iberian Peninsula. Its intervention within this territory has left a unique identity that takes advantage of the city to be an icon of tourism. In addition to that described our tourist map of Sintra will show you those natural places that complement the offer that this locality presumes and so much likes the thousands of visitors that in different seasons dare to visit. These places of which Sintra is proud combine nature with the opulence of constructions loaded with history and whose magnitudes are sustained by the opulence of details. All this magic gives beauty to its coasts and forests, something that will be incredible to witness and know the history behind it.

Sintra is a village and forms part of the municipality of the same name with 33,000 inhabitants in its nucleus and 377,000 in the whole area. Although people usually associate the Moorish and Roman past with Sintra, it is also true that several settlements were established before and after, taking into account that there are indications that this land was occupied during the Neolithic period. The city of Olissipo, as it was named by the Romans, became part of the dependencies of the Capital. During the Moorish and Christian occupations, its historic centre was enriched by defensive and religious institutional buildings, which later underwent restructuring as a result of the ravages of time. By the nineteenth century for its beauty the city was highly prized by high society, making its center in one of the most popular accommodations for; officially Sintra becomes a tourist attraction. 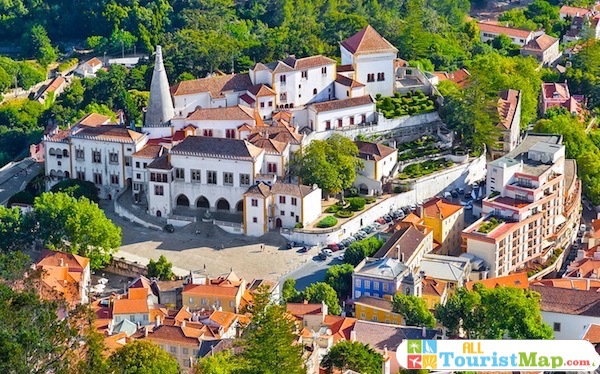 In the twentieth century due to the expansion of urban projects the historic center of Sintra was threatened, and thanks to institutions dedicated to the preservation of its heritage has achieved conservation. Throughout the area there are important sites to visit to learn about its history and admire its architecture, intertwined with natural landscapes are the Castle of the Moors, the Da Pena National Palace and the Palace of Monserrate, if you wish you can combine tourist routes between these sites and complement with a tour of its gardens and surroundings. You can also programme a walk around the surrounding towns such as Azenhas do Mar Playa de Adraga. In the historical centre of Sintra you can see the Sintra Palace or Da Vila Palace with its beautiful interior and façade that marks the epicentre next to Quinta da Regaleira and Dos Capuchos Convent.

Sintra has to choose from, from the historic center as an entrée. Their villages are crossed with the routes of the palaces and beaches. Beautiful views of the horizon are ready to be seen from its cliffs. In order to have a clear idea of what to visit, this Sintra Tourist Guide provides the most detailed information on the most recommended sites. If you plan to visit sites together you can use a route that integrates several sites where you can travel by tourist bus, such information can be obtained at the tourist office of Sintra. We also place the distant routes between sites so you can have orientation and plan an excellent weekend getaway with the family.

What to see in Sintra

Undoubtedly, the Castle of the Moors must be in the route of any traveler for its architectural, historical and archaeological value. At the time of the Christian conquest in Portugal, the fort was depopulated. The castle suffered a fire and the scourge of nature through an earthquake in the eighteenth century that left it almost uninhabitable. Much of it was restored by King Ferdinand II, with the aim of preserving some of its most original sectors. Around the castle is a very interesting archaeological research site, which studies a medieval Islamic quarter. Another attraction of the castle is its Historical Interpretation Centre. The guided tour contains several exhibits of the excavations in the nearby grounds. 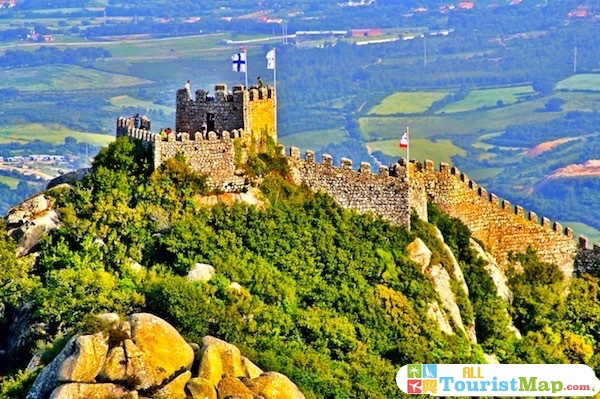 The Palace of Monserrate is one of the most spectacular historical centres and mansions that travellers cannot overlook. It is one of the most iconic buildings in Sintra. It perfectly combines Arab and Gothic architectural forms surrounded by beautiful gardens. The palace was built with the aim of being the summer house of Viscount Francis Cook de Monserrate in 1860. Although not very large, it is essential to visit the interior spaces. Of the outstanding sites is the Music Hall, is currently used to develop cultural events and whose acoustics is impressive. Arriving at the Palace of Monserrate is a wonderful experience as well as visiting it. It is only 6 kilometres from Sintra, on foot or by car. It is exciting on the way to enjoy the incredible natural panoramas and other historic buildings. 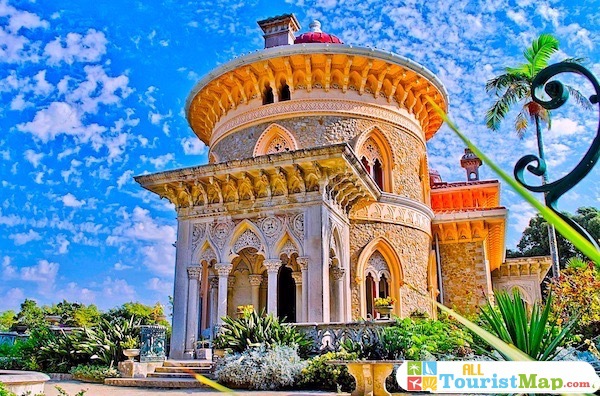 O convent of San Antonio, is one of the most exotic places the city of Sintra has to offer. Located deep in the forests of Monserrate Park. Its small dimensions were no accident, the design of the structure was thought to have narrow doors and small spaces. The way the monastery is built makes visitors believe they have entered a magical world of tiny beings. This abbey used to provide the monks who lived there with a thoughtful and peaceful atmosphere surrounded by nature. Despite being little known to tourists, it is one of the best historical monuments in the region to tour. The monastery is located a few kilometers from Sintra for which it is advisable to go by car or bicycle. 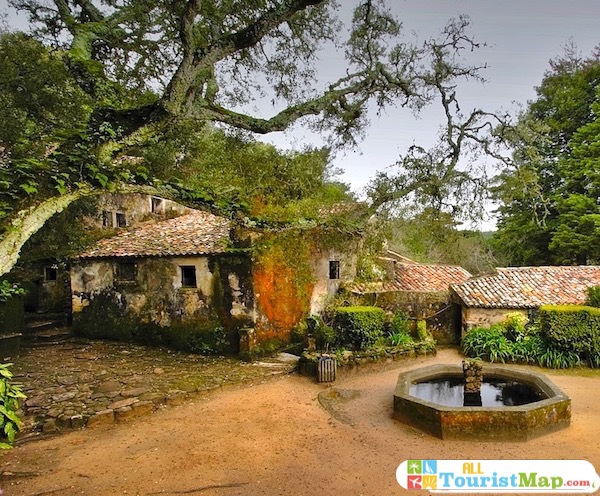 Also known as the palace of Sintra. It is located in the centre of the historic centre of the city. It was one of the palaces occupied by the Portuguese royalty. Although it is not known who created this beautiful work, it is known that the construction dates from the fifteenth century. As soon as you enter the mansion, you will feel a thousand-year-old atmosphere. Walking through the Palace of Sintra is walking through spaces that in time immemorial was the residence of the Portuguese monarchy of the Middle Ages. Inside you can admire the Hall Coat of Arms. It also houses the world’s most important exhibition of Mudejar tiles. Also, it contemplates the impressive architecture and the great chimneys of more than 30 meters of height of century XIV, to keep the old kitchens free of smoke. 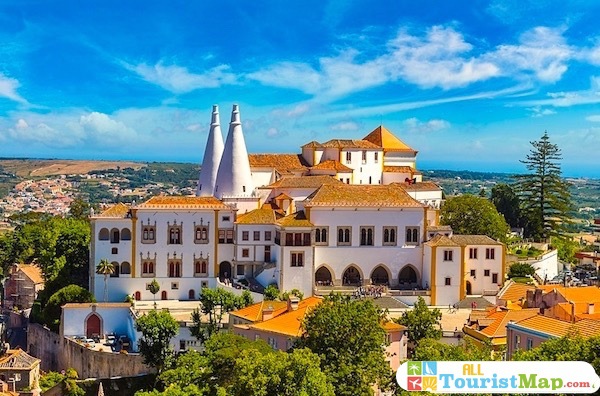 Cabo da Roca is a cliff more than 100 metres high. It is located in the westernmost part of the European continent. It offers incredible views and trails along the escarpment to explore. Despite the large influx of tourists, mainly on weekends, there is always room for new visitors. You can’t go to Cabo Da Roca without having your picture taken at the Crucifix monument, the westernmost point in Europe, where you can read the quote “where the ocean begins and the land ends”. Incredible panoramas of the sea at the top of the cliff; the blue waters of the Atlantic extend endlessly on the horizon, the end of the ancient world. Cabo da Roca is less than 3 kilometers from Sintra, which can be reached in about 30 minutes. 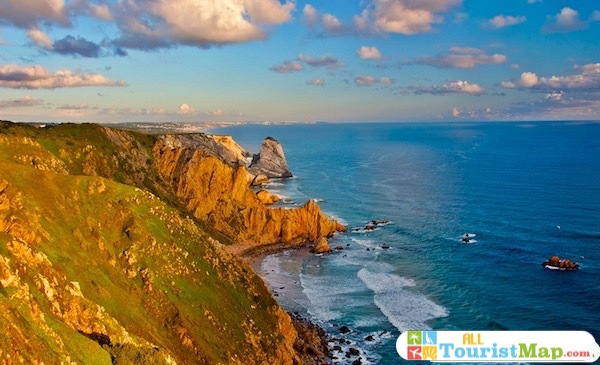 At the top of a hill in Sintra is the National Palace of Pena, a national symbol. It was built by King Ferdinand II, who in the nineteenth century imposed his opulent at the time of its design. It is an imposing mansion that from the outside seems to please the tastes of the kings. The façade is shown in various colors, a violet part, a red tower, a yellow minaret, and so on. Today the building is one of the best representations of romantic architecture. Being located at the top of the path, the palace can be seen from a great distance. 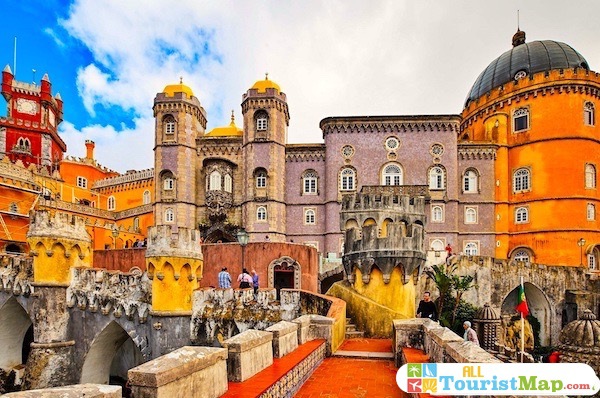 There are countless beautiful places to go in the city of Sintra, one of them is the Quinta da Regaleira. The place, which attracts by its strange nature, was the inspiration of Carvalho Monteiro.  Carvalho ordered architect Luigi Manini to create spaces that reflected his passion for alchemy and occultism in his architecture. The palace is mythical with many Gothic features, has underground caves and a covered park. In the gardens, there is a creepy well more than 27 metres deep with stairs leading down to lower levels and connected to tunnels leading to various parts of the garden. The visit to Quinta da Regaleira is one of the most accessible in terms of location and price. 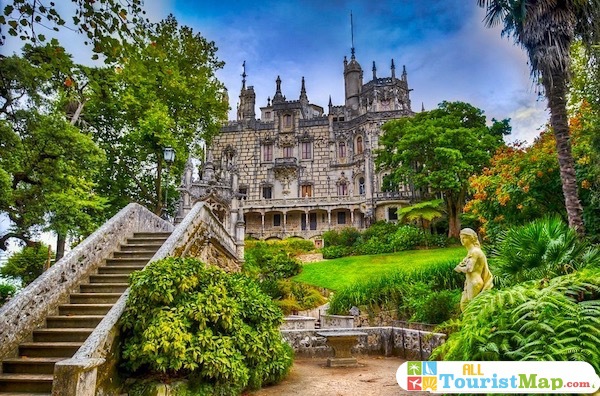 The Palace of Queluz was built in the 17th century as the home of King Peter II. It was later enlarged and transformed into an elegant palace. It was the royal residence during the reign of Maria I. The interior of the mansion shines with the grandiose and elegant Throne Room; splendid scenes and banquets took place. It is decorated with mirrors, crystal lamps and golden statues. There is also the Music Hall, where the Queen’s orchestra performed operas and concerts. The kitchen was transformed and is now a restaurant, preserving its old fireplace and vaulted ceiling. It is not difficult to access the Palace of Queluz, since it is connected to the main tram of the region. 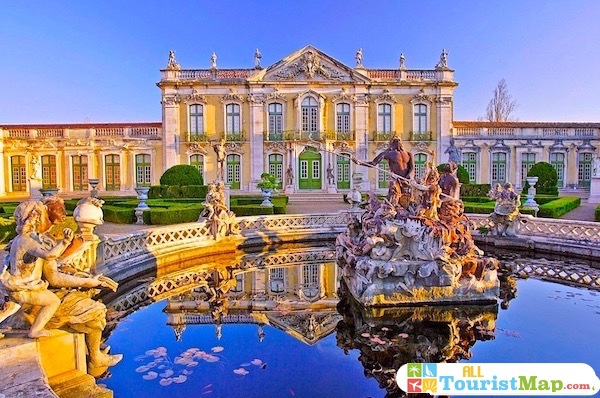 Azenhas do Mar is a tiny village within the Sintra region located along the coast. It surprises by its houses scattered on a cliff with a transcendental view. The staggered houses give the appearance of being unstable, staggering on the slope of the cliff. There you can appreciate marvelous views of the blue waters of the Atlantic. The sea shore that exists in Azenhas do Mar includes a natural pond, bordered by a rocky limit totally of sea water. To visit Azenhas do Mar is a phenomenal past and to stay a few days would be good to know it in depth and to get all the juice out of it. In the tour you will take into account a variety of restaurants and bars in good quantity and varied styles. Getting here is very easy, there are only 20 minutes left of Sintra. 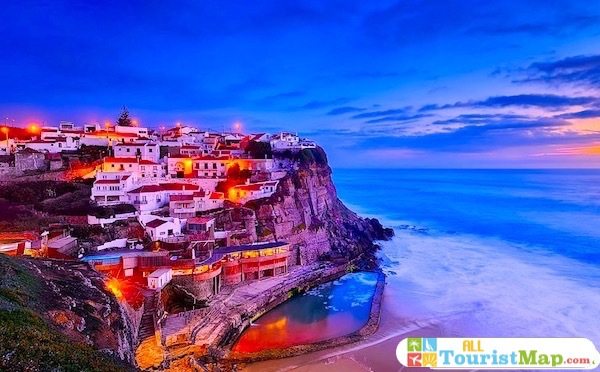 In Adraga Beach you can see how the sparkling waters of the Atlantic hit the golden sand of the coast. It is one of the westernmost beaches in Europe and is often among the best bays in Portugal. Due to its rustic waves, it is famous among surfers. Local bathers and tourists also find their place here. In the place you can see cliffs bordering the beach and rock formations sculpted with the force of the tides. Since the coast is facing west, it is an excellent area to take pictures and admire the sunsets, seeing how the sun is hidden in the horizon. Adraga has restrooms and food outlets near the sand, as well as a restaurant embedded in the cliff where dishes are served with seafood ingredients.

Map of Hotels in Sintra

Because of its proximity to Lisbon, some use it as an escape or complement to their route through the capital. The truth is that Sintra will leave you so delighted that you’ll want to spend more than a whole day; even more so if you plan, you’ll find that you’ll need excellent accommodation. That’s why our Sintra hotel map is ready to show you all the types of accommodation the area has to offer. Depending on the location and quality of hotels you can access our interactive map and click on the hotel that suits you best. Villa Mira Longa B&B is a peculiar option that consists of apartments ideal for the whole family and is located a few steps from Quinta da Regaleira and Palacio da Vila, it is an option that offers a total of 6 rooms, all well equipped and with a country design.

Video of the most impressive tourist sites in Sintra