The fortune of visiting a European city is definitely something you have to do right now. A city typical of the old continent, and unique in history is what this Lisbon tourist map has prepared for you. You will enjoy in this virtual trip a city that mixes flavors, colorful streets full of contemporary spirit with the traditional, in short a beautiful city and close to the Atlantic coastal area. Of course you will want to repeat, and the reasons will put you in this tourist guide with the best recommendations to visit and stay. You will see why many Spaniards prefer to come for tourism, beyond its easy access. Lisbon has always been and always will be available for tourism, its beauty is characteristic of the city and modernism as an emblem makes its people keep it together with its rich history impeccable for their visits.

You will find it curious to come across people from different parts of the world, as if a handful of cultures were trapped after sifting them into a mesh; this is Lisbon, like a mother who faithfully keeps her own traditions, but adopts everything and even brings together the historically relevant aspects of different civilisations and who left an indelible mark on her memory. With places that denote the importance it had, it shelters under its mantle more than half a million people in just 100 square kilometers. There are different versions of its origins, some of them bordering on mythology. It involves the Phoenicians, Romans, Celts, Iberians, Arabs and all those that occurred throughout the Iberian Peninsula, even the origin of its name remains within the mythological speculation of Greece. So for history and culture you will have a lot of things to see. 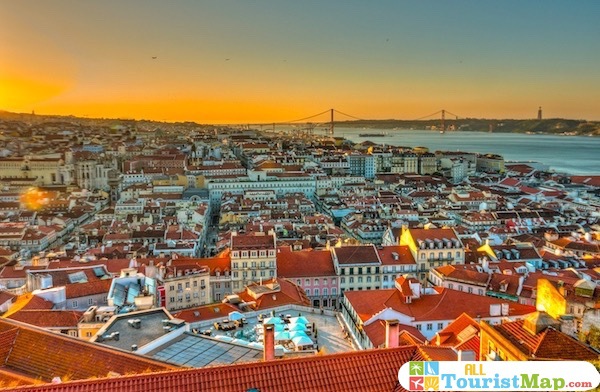 A chain of natural and man-made events has allowed him since the Middle Ages to establish notorious constructions that today endure despite the constant rhythm of a cosmopolitan city. The Tower of Belém or the monastery of the Jerónimos have defined that Baxia Pombalina since the 18th century. The Monument to Discoveries is a place that recently reminds visitors that this city influenced the expansion of western society towards the new world. Beyond the typical monumental circuits, the invitation is to delve into its way of life and be seduced by the melody of the Portuguese language in Lisbon’s Barrió Alto, where the young spirit has taken over this important social centre, or the Rossio Square as the ground zero to undertake other aminos within this magnificent city.

As we have been saying, Portugal has an enviable climate throughout the year, so its capital will have to devote a good time to savor as much as possible the most resonant corners, that’s why in our Lisbon tourist guide we place those that in addition to having the best valuation, can serve next to our Lisbon street map the tool you need to stumble with all the variety offered by the city between each point. Let’s say that a procession through its streets makes it tempting to try among the infinite options for entertainment, shopping and tasting, so we bring an excellent map of hotels that will help you choose the perfect place to rest and share with the company that prefers all the experiences that Lisbon has saved for you.

What to see in Lisbon 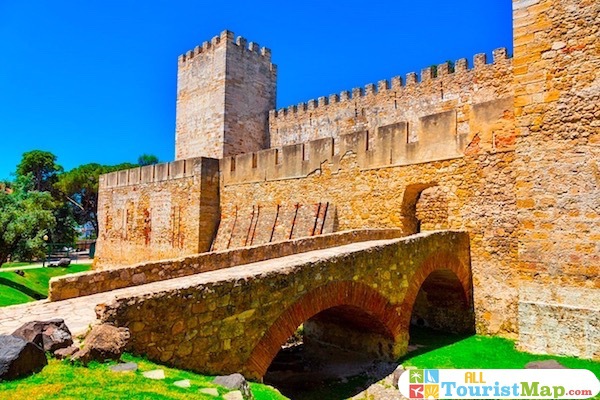 This site, which originally served as a fortress for the Arab invaders, was called Dos Mouros Castle. When the monarch Alfonso Enriquez takes over the city, it passes to his domains, and adopts the name of Castillo de San Jorge in tribute to the order of crusaders, devotees of this saint, and campaigners. From then on, it became a castle of royalty, the main dwelling within the capital of Portugal. A visit to this site will undoubtedly leave you with a good taste to admire from high inside the view offered by the river Yew and still feel the melodies of those street artists who brighten up the atmosphere. Definitely the 360º view is given by the tower of Ulysses, not to mention its beautiful gardens, a colorful place adorned by majestic peacocks, ideal for photography. 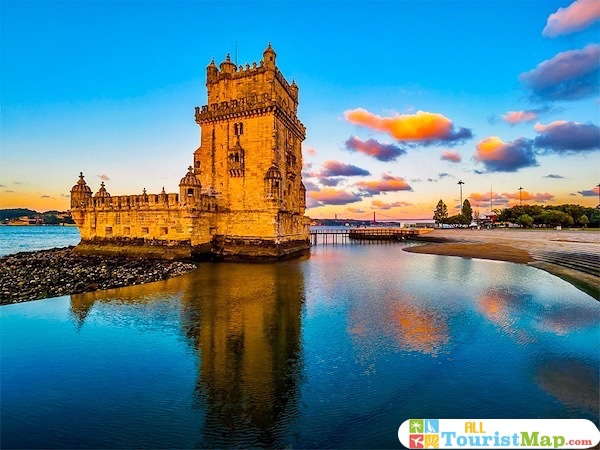 This 5-level tower is predominant in the surrounding landscape. It is a wonder belonging to the sixteenth century thanks to the patronage of King Manuel I. It was originally used as a watchtower and defence against the harassment of enemies that stalked the coast. Once it fulfilled its function within this tumultuous period, it became a prison, a lighthouse and even a tax collection centre. Due to its dimensions, together with its architectural mixture of Arab tendencies with Gothic in the best Manueline style, it has been acquiring an important place among the most important historical buildings of the capital and the whole country. Let us also take into account that the age of this construction is also related to that where the discoveries to the new world took place. Come and admire the artistic details of its facade in person, close to the monument to the discoveries.

Monument of the Discoveries 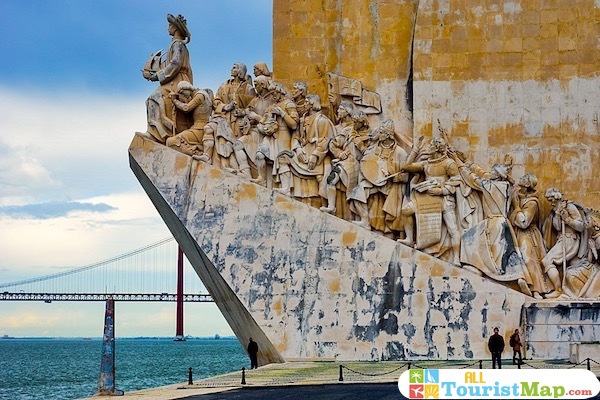 This monument is nothing more than a carved account of those historical events during the discoveries of important figures of navigation. To be more meritorious the monument its creation is an honorable mention to Enrique the Navigator, who in the 60’s of the 20th century celebrated 500 years of his death. Nothing better than a caravel to illustrate this monument. It houses carvings of important people as well as sailors and institutions of the time, all in the 52 meters high that corresponds to this tourist wonder. Inside, a hall for temporary exhibitions gives life to one of the busiest cultural centers in the city; its content is not precisely related to the subject matter. You would have to come to observe with details all the history contained in its engravings and take advantage of its height to get some excellent views.

Lisbon has a peculiar fame in its gastronomy. Confectionery is not lagging behind in terms of attractiveness, especially because of the traditional nature of its confectionery. This delicacy is an almost accidental creation of the monks belonging to the Jerónimos monastery. These were the guarantors of the secret recipe of the cakes. At the same time the remnants of the egg whites served to starch the fabrics and extend their useful life. This recipe was sold to a businessman named Domingo Alves, during the closing of the monastery in full Liberal revolution. That businessman depositary of such a magnificent secret raised what we know today as the Casa de los Pasteles de Belém. In almost 2 centuries he has managed to preserve the tradition of such a well known dessert, whose demand exceeds 20 thousand units a day on average.

Within the tour in the district of Belém, the monastery of the Jerónimos could not be missing from our itinerary. This monastery, whose order belongs to Saint Jerome, is one of the popular buildings that preserve the characteristic Manueline style.  It represents next to the tower of Belem one of the buildings that illustrate the era of discoveries. Its construction was thought to give joy to Vasco de Gama. Its interior is a mine of history and art impregnated in its walls and ceiling. This attraction houses the National Museum of Archaeology in an annexed room erected in the second half of the 19th century, as well as the Marinha Museum. Before stopping the monastery function served as a church. Traditionally sailors used it as a vigil site just before leaving for expeditions.

We decided to integrate this set of attractions, beyond its proximity, by the attractiveness that both integrate. The arch serves as an entrance door in the best style of a triumphal arch. Made in the sixteenth century and restored in the nineteenth century gives a decorative touch to the square. It is the main center of the city; epicenter in which the inhabitants and tourists come to enjoy cultural, musical and New Year’s festivals.  Emblematic site of modern and contemporary history. The arch has a viewpoint that was reopened in 2.013 to the public. Nowadays, it gives its visitors beautiful views of the city, as well as the river tajo and the square. The square has some important sculptural works, the chisel of Vítor Bastos and personify historical characters who made life in the capital.

In addition to historical and monumental walks Lisbon integrates the young spirit as any notable European city. The nightlife becomes a reality within the limits of the upper quarter; it is not the only place but one of the most popular and vibrant that you should not miss. If you like rock, and indie music then you will find here varied places where you can satisfy these tastes. Its commercial premises give an original touch to its streets with its unique decorations. Their bars and restaurants have an excellent attention and quality in their products. In addition to them there are options such as discos where you can go dancing, because of course there is room for all tastes. The upper neighborhood is composed mainly of three streets: do Norte, do Diario de Noticias and da Atalaia.

This square is another important point to concentrate, in fact you will always see it plagued with tourists and Lisbon sharing. The Rossio square is the nerve center and includes one of the ends of the Rúa Augusta. By this connection the access to shops from this square makes it as a kind of place to rest after a pleasant commercial walk and the tasting of typical and international dishes. In the same way this point can be a place to undertake a route inside and outside the city; the Rossio train station is nearby. Also nearby is the Teatro Nacional Doña María II. There are other attractions within the square such as the Café Nicola, well known by visitors, especially for its modernist style, as well as statues that adorn the surroundings. 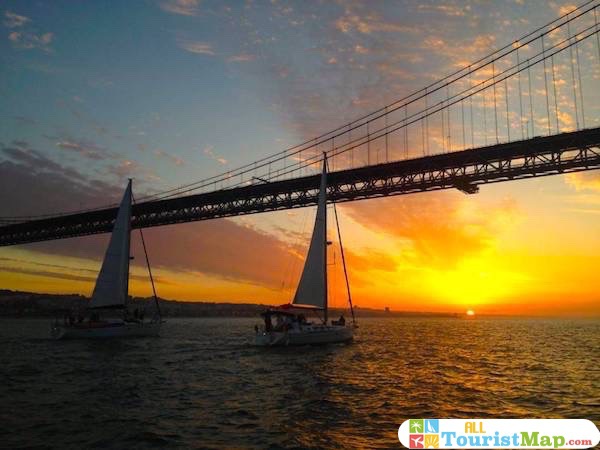 So impossible to cover the sun with a finger, and impossible to pass by and not see this majestic flow of fresh water. Not for nothing is the longest river in the entire Iberian Peninsula and its mouth is right here. It has been the protagonist of Lisbon. Throughout history it has been immortalized in the pen and song of local and international artists. It always was and will be the main attraction of visitors. Its views are the subject of photographs, especially those taken at dusk. At the end of his tour in this geographical location, he is responsible for forming the sea of straw that gives the coasts clean water. A preferred activity for tourists is to take a ferry. From the perspective of the river you can see the buildings that border it as well as the entire city.

Map of hotels in Lisbon

Seeking refuge in the capital is not difficult, there is a lot of information to filter the site of your preference. Nowadays the growing tourism has made that the hotel branch has a sustained expansion, adding many modalities in the main neighborhoods and different types of services. Generally the most popular are usually reviewed in our map of hotels in Lisbon, so you will have a useful and interactive guide to position the best option within the map. Brown’s Downtown Hotel is an option that we locate and recommend, it is located in one of the areas of greater hotel concentration of the city and near the Arco da Rúa Augusta as well as the Rossio Square. Their bedrooms look elegant and well decorated and have a kitchen and fridge, some with balconies to enjoy the night views of the city.

Video of the most impressive tourist sites in Lisbon