You have to come to Oporto if you want to be in direct contact with the common, the experience of that vintage Portugal, where fado is lived in the old façades, and the melodies that rumble in its streets. This city that clings to the feeling and the heritage usually leaves a good taste to those who visit it, and we are not exactly talking about its excellent wine, or even its spectacular gastronomy, it is the pleasure to see time pass to the rhythm of this nostalgic port city that in turn gives us history and culture, through monuments and temples. Enjoy a varied tourist offer that our tourist map Oporto takes advantage of to show in detail. Let the Douro and its people help you understand what words can not explain, so learn a little about this city with our reviews and routes.

A mythical city, in terms of origins. The Celts were the original settlers, but later the Greek Cale established the foundational base and the use of this city as a port enclave. Later the Romans were the ones who defined the spirit of the city, finishing with the name of Cale and Port, which consequently derives the name of Portugal. Due to its patrimonial importance taken by Unesco, population of 3 million inhabitants and submission to the dynamics of modern European cities, Oporto is considered the second most relevant city in the country. On occasions more than one dares to say that this city is destined to lead as capital, hence the rivalry with Lisbon. It is extremely small, we are talking about 41.6 square kilometers of surface and the whole city is connected by a large number of bridges of various ages and styles. 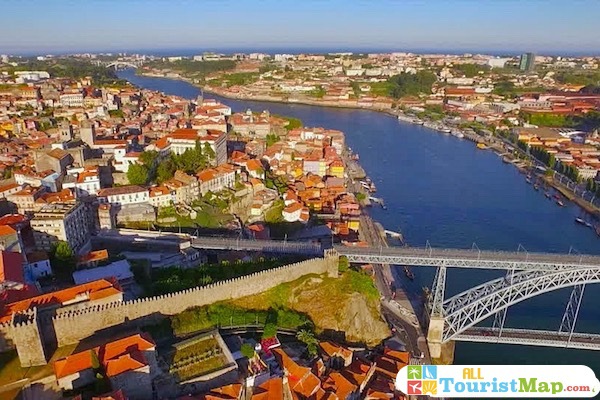 The Historical Center is the main attraction, from there you can appreciate an important quantity of buildings that mix the Romanesque style with the Renaissance, Baroque and Gothic having as main architectural reference the Cathedral of Oporto. Another important place where you can find these elements is the Ribeira, perhaps the most famous place in the city, from above awaits you with its terraces and curious corners that you can appreciate as you walk down its stairs. While the Church of San Francisco captivates the attention with its golden details in the interior we can plan to give a tour by the Palace of the Stock Exchange and the Tower of the Clerics. As a city adorned with beautiful bridges are you can stop passing through the bridge Don Luis I and admire the beauty of this work of the nineteenth century, but if you want to experience something different you can go to the World Of Discoveries Museum.

Oporto is a concentrate of monuments and magical places that require more than one day to visit. There’s no hurry with it, let us give you reviews about its most important places and the best routes to take with this tourist guide to Oporto. From here we can program a personalized itinerary thanks to our recommendations and of course our usual hotel review. Porto is destined to be modernized, and the conglomerate of tourist sites is becoming more and more easily accessible, due to its transportation system. However, the narrowness of its streets inhibits walking in a car; there is no problem with it, going on foot is the most frequent activity of tourists, this is how you live Oporto, this is how you can stumble over its wines, its street artists, its gastronomy, its people. Continue with us to find out what to visit in the first place.

What to see in Oporto 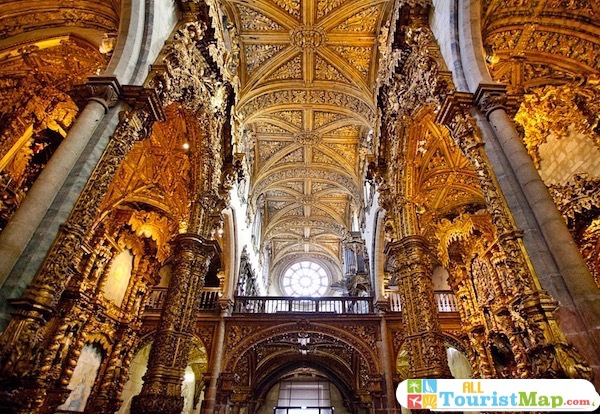 The church of San Francisco is one of the most captivating works of religious architecture in Porto. Beyond serving as a place of worship, this church is for the city of Porto, a decorative heritage, valuable from the perspective of its aesthetic attractions. It was built at the end of the 14th and beginning of the 15th century, representing Gothic and Baroque elements. Without a doubt, it is one of the most luxuriously decorated buildings in Porto. Most of the ornamentations have their origin between the 17th and 18th centuries meaning their baroque style: cherubs, floral motifs, frenetic animals, arches and marble columns, all in gold. It is impressive that the gold decorations used add up to more than 40 tens of kilograms. On the other hand, this temple has some tenebrous catacombs; essential for the most daring visitors.

It is considered the third most beautiful library in the world. It is remarkable for its fabulous neo-gothic exterior. In it you can see paintings by Jose Bielman which represent science, art and whose beauty is only surpassed by its wonderful interior designed by engineer Xavier Esteves. It was inaugurated at a gala party attended by public figures, both Portuguese and Brazilian. The writer JK Rowling found inspiration inside the library to write her books, in the time she lived in Portugal. Although no payment is necessary to enter, it is advisable to buy a book and a postcard inside, since the library has a strict policy that prohibits taking photographs inside.

It’s the Cathedral of Oporto and began its construction in the course of the twelfth century. It was rebuilt and renovated many times over the centuries. All these revitalizations result in the cathedral its various architectural styles. The church is mainly baroque, but has Romanesque exteriors and chapels of Gothic design. This temple, accompanied by its mysterious monastery is considered among the most popular tourist destinations in Oporto. The abbey of the cathedral is perfectly decorated with painted tiles which depict biblical scenes. The internal spaces are in the shape of a square with a main column in the middle, where the city’s criminals were hung. In order to find this building, one only has to enter the historic centre of Oporto and it will be easily recognisable.

It was in 1896 when the first train arrived at this station, but the building, work of French Renaissance style, is officially inaugurated in 1916. This train station is the most central of the town of Oporto, being near the monumental Avenida dos Aliados. Almost 20 thousand beautiful tiles decorate the station and many are allusive to the history of transport in Portugal. The most relevant images show King Joao I and Queen Philippa of Lancaster. Others reflect Prince Henry the Navigator conquering Morocco and the rest to the battle of Arcos de Valdevez. To get to and from Portugal’s northern cities, trains can be taken at this station. Undoubtedly going to Sao Bento Station is an extraordinary experience that transcends the use of this service. 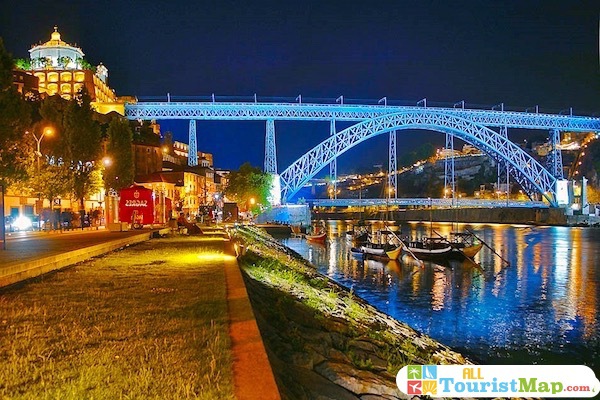 One of the icons of the city of Porto is the Don Luis I bridge. It links the sides of the Duero River, connecting Vila Nova de Gaia with the bustling centre of Ribeira. It was built at the end of the 19th century to replace another bridge that was replaced and still exists. It is structured on the basis of enormous metal profiles in the shape of an arch, which supports the transit route. It is important to mention that the previous bridge was designed and built by Gustave Eiffel, the author of the most famous tower in Paris. Currently, the Don Luis I bridge transports the trains of the Oporto subway and has a pedestrian footbridge. From the bridge you can get superb views of the city over the river.

Tower of the Clerics

Dated from 1763, the Tower of the Clergy is one of the most sought-after tourist destinations in Oporto. It is a reference point of the metropolis. Given its height, it is above most buildings and enjoys great visibility. With its almost 80 meters, was used as a reference mechanism for ships that used to transit the Douro River. The Tower of the Clerics is a charming attraction in any tourist route of the city of Oporto. At the top of the tower you can have the best views of the city. It is open every day, although timetables vary from season to season.

La Ribeira is the oldest town in Porto. It is a series of narrow alleys where you can find old buildings that border the banks of the Duero River. This is an area of high tourist attraction in the city for its many shops. Its craft shops, restaurants and bars have a view of the river and the Don Luis I bridge. The nightlife in La Ribeira is very active, with a good atmosphere. Its narrow streets are frequented by tourists, Portuguese and foreigners who eat, drink and have a good time. Also, here is the Casa do Infante where Prince Henry the Navigator was born in the late fourteenth century. Over time, it became a repository of documents and manuscripts related to the history of Oporto. 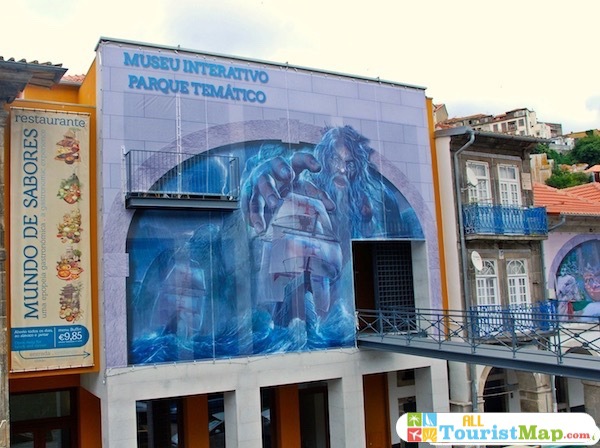 The World Of Discoveries Museum is a special destination for families and those interested in the shipping history of the Iberian Peninsula. The theme park makes a mixture of history, discovery, fantasy together with elements that manage to simulate the adventures of the ancestors. Inside the museum you can experience the perception of the world of the Portuguese in the period from the 13th century to the 19th century. It is equipped with 4D tools for even smelling spices and displays of replicas of ships of the time. In the same way, the most renowned sailors on the planet such as Christopher Columbus, Ferdinand Magellan, Bartolomeo Dias, have their space inside the museum. It is not difficult to get to the World Of Discoveries; just walk along the river in La Ribeira and find the building with a giant facade boat.

Map of Hotels in Oporto

A city like this does well to concentrate its hotel offer alongside the bulk of historical attractions. There are a lot of options, which you can easily find in our map of hotels in Oporto. It all depends on how you want to spend it in Porto. We recommend the service offered by the hotels that are scattered in its historic center. Mercure Porto Centro Hotel is located in a strategic point of Porto, just a few minutes from the Luis I Bridge and close to the main tourist points within the city. Something you will like about this hotel, in addition to its attention and elegant rooms is its proximity to shopping areas and the metro station. Its bar gives the theatrical illusion and its balconies give you beautiful views of the city.

Video of the most impressive tourist sites in Oporto