Tacna is a city catalogued as charming and undoubtedly a heroic region, Tacna or Aymara is part of the Republic of Peru, is located in the south of the country, has 16,076 kilometers. Since its foundation in 1875 offers visitors and natives a wide variety of historical and cultural attractions, in our tourist map of the city of Tacna you can undertake a great journey into the past, you will have the opportunity to know the great desert and its rivers, fertile valleys and enjoy the warm weather every morning, you can also relax in the hot springs and quiet beaches or simply enjoy the person who accompanies you with a glass of wine, while you delight in contemplating the sunsets of this incomparable place.

In this department its tourist sites reflect patriotism and history. Between the coast, the mountains and the blue sky there are smiles of enchanted tourists with the tourist center of the city of Tacna. Place that was protagonist of great important scenes, among them the war of the Pacific. Between the relaxing sound of the waves and the generosity of the inhabitants are the large vineyards, ready to receive wine lovers and their pleasant smells. An exemplary place that by God’s decision shares its borders with Chile, has volcanic zones, also has its attractive desert or mountain ranges.

It is a place designed for those passionate about water sports, also for those who like long walks and for those who seek to contemplate a natural life in the midst of tranquility. Tacna’s climate varies as it depends on sea level.  It has regular flights departing from Lima and also land access by the Pan-American Highway South, the latter being a tourist bus with excellent conditions for travelers. It has great variety as for the gastronomy, it is possible to be tasted of the delicious corn with cheese, the humitas, the spicy to the tacneña, the inigualable chicharrón of pig with toasted corn, the adobo of chancho or the chactado guinea pig. Among the tourist information we can mention that the visitors prefer some dates to go to the city; between February and March the international carnival is celebrated where several delegations of the bordering countries and different regions of the country become protagonists. Also in May they make a parade to pay tribute to the defenders of the historical monumental complex of the Alto de la Alianza, in June the winter solstice, the Tacna international fair, the feast of Señor de Locumba and many more.

Tacna is a tourist city in Peru that has different charming places to visit. In the historic center of Tacna you will find the Cathedral, the Ornamental Fountain, the Civic Walk, the house of Zela or the Municipal Theater. It has excellent transportation that offers several options for the traveler and that adapts to the budget of the same one. Whether you decide to visit the coast, the mountains or simply the jungle you can stay in the best hotels and enjoy the country’s cuisine in the best restaurants.

What to visit in Tacna

There are many places you should not miss, this is an event that has no comparison and will be remembered forever. It’s time to pack up and let your imagination run wild at every stop in Tacna: 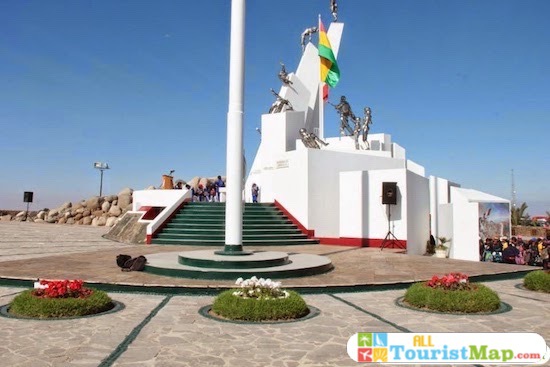 This is a construction that was made in memory of the heroes of the Pacific War, a battle that took place in May 1880, on the pampas of Cerro Intiorko. In this complex there is currently a holy field, a monument and a museum. Tourists are fascinated by the spectacular view of the Andes, as well as the imposing Tacora and Chupiquiña volcanoes. For those who like vintage photography, the heavy artillery found in the area can be used as a backdrop. Inside the museum you can see the models that allude to the battle, there are also bone remains, weapons of those times and uniforms of the soldiers who gave their lives at that time. This is an architectural work by Jorge Espinoza Cáceres and Julio Enrique Vargas Giles, as well as approximately 8 sculptures created by the famous sculptor Holger Carpio Dextre. The month where many tourists can be observed is the anniversary of the Battle that is celebrated every 26th of May. The monument can be reached on foot, with a tour or private car.

It is a set of geysers that are in the middle of a volcanic landscape and are used as thermal baths, these springs are the most sought by visitors for their benefits and their hot waters and through them manage to comfort their spirit or to have natural attenuants and thus tonify the body, many other people who suffer from rheumatism and arthritis also become special patients of these sources for their healing gifts. These large columns of steam welcome a community that wants to delight in these geysers that have different shapes and sizes, where nature and its vegetation are dressed in gala, are distinguished and protected, since they are in danger of extinction, among them are the Tola and the Yareta. The Valley of the Geysers and its exuberant waterfalls with different shades have a great impact on the landscape. 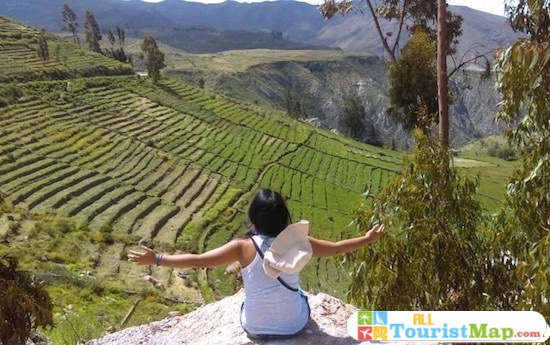 It is located to the northeast of Tacna, only 88 kilometers by road, and is located to the southeast of Peru. It has a beautiful pre-Hispanic history, surrounded by the inter-Andean valleys, the Barroso mountain range and the Puna. The climate is desert and ideal for walking to see each site, this province is the most sought after by tourists who like research and adventure. It has many places to visit such as the Mirador de la Achapeta, a privileged place where you can see the Cordillera del Barroso, it is located in the town called Ticao. For the more religious there are the temples or the church of Tarucachi, built in the middle of 1741, where San Benito de Abad is worshipped. There are also the thermal baths, better known as the natural pools, just 13 kilometers from the city. Tarata has different archeological sites, one of the most visited sites is the road named Tarata – Ticaco, an Inca trail where you can find terraces made by the Incas, in addition to lush vegetation that goes hand in hand with the beautiful yellow flowers. What has most impacted the different visitors is that there are high rocks that have similarity to people, are rocks full of legend and that shock both natives and tourists. You can also see the ruins of Santa Maria, is an ancient site that is next to the network of roads called Qhapac Ñan or Camino Real, on top of a magnificent hill. This province undoubtedly fills each visitor with new expectations. 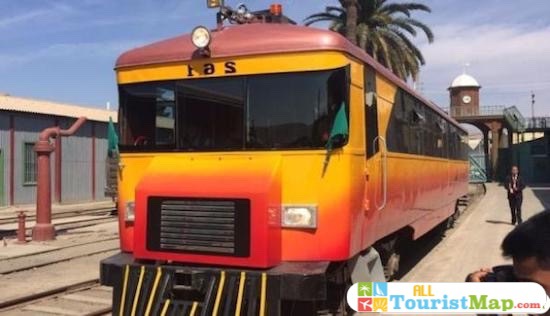 It’s one of the oldest trains in history, witnessing great episodes. According to historians, the tramway sheltered Francisco Bolognesi in the battle with Chile. It is striking that despite being 163 years old since its founding, it is still in operation; this train connects Tacna with a Chilean city, after a 62-kilometer journey. During the weekends you can see many Chilean visitors tasting the gastronomy and using the old train, they like these wagons since they are comfortable and very clean, in addition that allows the tourists to appreciate the landscapes, a natural spectacle without equal. You can also enjoy the museum where you can see several photographs, archaic trains and the towns of Arica and Tacna in the middle of 1929. 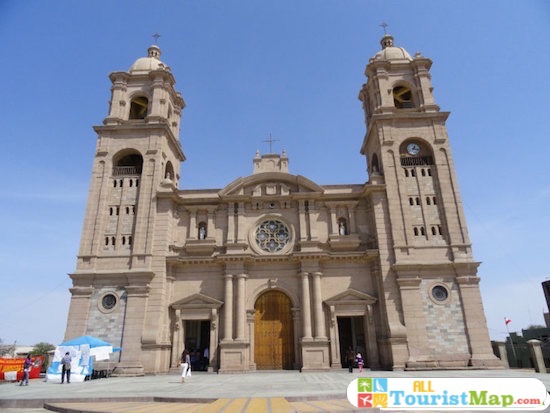 The cathedral was inaugurated in 1954 and is located on the Paseo Cívico, what is most impressive is that it was subsidized by the engineer Gustave Eiffel, the creator of the famous Eiffel Tower located in France. It comes to light that the limestone was the material used to give the neo-renaissance touch, the same was extracted from the hills Arunta and Intiorko . The image of the Virgin of the Rosary rests in the main altar being seen that it is the patron saint of the province Tacna. The cathedral was declared an Artistic and Historical Monument. The cathedral undoubtedly has walls full of history yet to be confirmed, however it is an imposing place with excellent lighting that at sunset manages to highlight the details of their respective construction. The temple is open Monday through Sunday from 8 am to 12 m and at 3 pm, this is a place designed to move parishioners to remote times while immersing them in the spiritual realm. 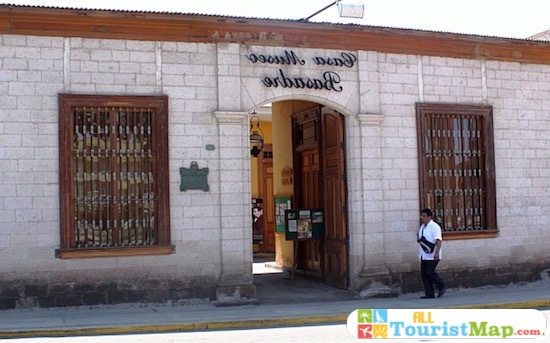 Also known as the House Museum, is located in front of the Plaza de Armas. This was the residence of Jorge Basadre Grohmann, a historian from Tacna who was born in 1903. The house has a structure with a singular republican style that in turn is accompanied by stones of stonework, it has a room and its walls are of adobe, columns of wood and quincha. It has two patios, one with an immense vestibule, a main hall that served to attend the crowded visits and many rooms, likewise it has two doors that allow the access to the dwelling. The place was declared Artistic and Historical Patrimony in mid 1978. Inside the facilities you can see the archive, the library which is accompanied by a large number of books, theses, pamphlets, magazines and some original manuscripts by the same historian.  Although it has been restored on several occasions, it has become an important cultural centre.

Map of hotels in Tacna

There are many options that tourists currently have, however we will show you a few hotels that will make each visitor feel like family, providing welfare and comfort while they are enjoying the city.

The Victtoria Apart Hotel is located in the urbanization Santa Teresa, has innovative services, comfortable rooms that give comfort and rest to the traveler. It has 7 apartments which are equipped to meet the needs of visitors, has mini Bar, internet access, TV, bathroom with hot water, equipped kitchen, cafeteria, also have beautiful living rooms, dining room, laundry and much more.

Camino Real Hotel, has a favorite location in the city of Puno, around it has cinemas, restaurants, theaters and shopping centers since it is located in the tourist center. It offers 20 rooms with excellent decor, equipped with the essentials to feel at home to every tourist. It has a cafeteria, room service, laundry service, internet connection, concierge, among others.

The Park Inn by Radisson Tacna, this hotel invites its guests to relax in the best contemporary style. It is only 15 minutes from the airport Coronel FAP Carlos Ciriani Santa Rosa and the best thing is that it is very close to the city. The restaurant offers delicious gourmet food for breakfasts, lunches and dinners. It has 75 rooms and Suites that have beautiful decorations, elegant and very modern. It also has laundry service, parking and room service 24 hours a day. The best thing is that the historical attractions of the city are very close.

The Takora Inn makes you feel at home, has cozy and very comfortable rooms, with modern and avant-garde decor, has restobar, tourist information services, hot water, garage, TV with Led technology, laundry, custody of values, plus a restaurant that offers regional cuisine in their breakfasts, lunches or dinners that will transport the diner to magical places.