Time passes in the world but it seems that it does not reach Trinidad, the capital of the province of Sancti Spíritus, in central Cuba. When arriving there, visitors will find a city that preserves not only a colonial air but a whole, its cobblestone streets, its wide balconies, its infrastructure with architecture based on cobblestone streets, wide balconies and wooden balusters, as well as carriages or carriages with horses. In this tourist map we will visit a locality whose greatest attraction, besides its beaches of Antillean waters is its spirit of past, museums and architectural structures, not in vain is known as the colonial jewel of the island and is one of the most beautiful colonial cities in Latin America.

The tourist city of Trinidad was founded in 1514. From then until the 19th century it was an economic powerhouse of the Antillean island due to sugar production, coffee cultivation and tobacco processing. Nowadays it lives of and for the tourism and proof of it is the impeccable conservation of the locality, especially of its historical helmet. In 1988 it was declared Cultural Patrimony of Humanity under the protection of Unesco and until now it is one of the cities that conserves in an integral way its colonial architecture, that was reestablished by experts, with the help of the inhabitants of the place that demonstrate a love for their land, perhaps like in no other place of Cuba. But Trinidad is not only its streets in which time seems not to pass, but a beautiful geography full of incredible natural sites, most of them transplanted, that go beyond beaches with fine white sands and transparent waters. The city is also a compendium of autochthonous festivities in which all its inhabitants are involved, because they have a deep-rooted sense of idiosyncrasy and celebrate this with the various traditional celebrations. 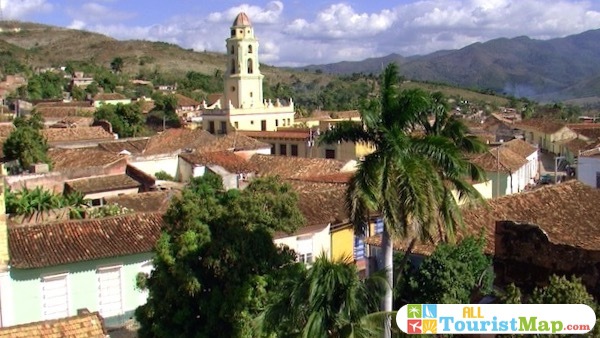 There are tourist attractions in Trinidad along the 1,115 square kilometers of its geography, which is home to an average of fifty-one thousand inhabitants. In addition to its cobbled streets, traditional churches with colonial architecture, a number of museums and galleries and a vibrant nature with mountainous areas inhabited by eucalyptus, cuajani and male pine, also has a fauna that can be enjoyed as the city belongs to the ecological district of central Cuba, which shares territory with the Cienfuegos Coast. Therefore, in addition to fish and mollusks, there are beautiful and picturesque mammals and amphibians.  Trinidad has a tropical Caribbean climate typical of this type of geography, in which the temperature remains stable between 22 and 26 degrees Celsius. This Caribbean jewel can be reached by air through nearby airports, as it does not have its own air terminal. Users can reach Cienfuegos airport, seventy kilometers from the city. Another option is the Santa Clara air terminal, which is 110 kilometers from Trinidad. It can also be accessed by land through the Santa Clara Mountains, whose route covers eighty kilometers passing through the towns of Topes de Collantes and Manicaragua. The internal tour can be done without vehicles, but, if necessary for visitors, you can use internal taxi services and tourist buses that are easily found in the city.

Walking, feeling, getting lost and finding yourself in the old streets is part of the main attraction of Trinidad, in the Cuban province of Sancti Spíritus, also known as the city museum. To enjoy the Cuban son or the trova, while you savor a typical drink of the Antillean island, perhaps a mojito or a drink of rum, is also included within the charm of visiting a destination that although it is true that it is small, can be enjoyed as a locality of passage towards other destinations in the country. Enjoy the beaches or the Valle de Los Ingenios, a natural tourist heritage, which is very green and attractive because you can know the history of the sugar cane plantations that boosted the local economy.

What to visit in Trinidad

Playa Ancon is the main and most visited beach in Trinidad. There are four kilometers of bay, with white sands and crystalline waters typical of the Caribbean Sea. It is located twelve kilometres from the city and there is a series of beach bars where you can enjoy the coastal gastronomy. There are also a variety of street vendors who sell other foods less typical of beach places but that are attractive to the palate. Playa Boca is closer to the town, its attraction includes the proximity of the river Cañas, which flows into the spa. There you can take advantage of the scenery to practice water sports and you can see a barrier of dead corals that is a visual spectacle.

The Valle de Los Ingenios was one of the sugarcane regions between the 18th and 19th centuries, as it turned out to be a fertile land with unbeatable conditions for the planting of sugar cane. Today it is a mixture of urbanism and nature, it is an ecological system in an extensive plain, formed by the valleys of Santa Rosa and Agabama Meyer, also by the coastal plain on the south side. To get there visitors can make a trip of about two and a half hours, but the journey is idyllic as they can travel on a train, a steam engine, dating from the nineteenth century and can take it in Trinidad. 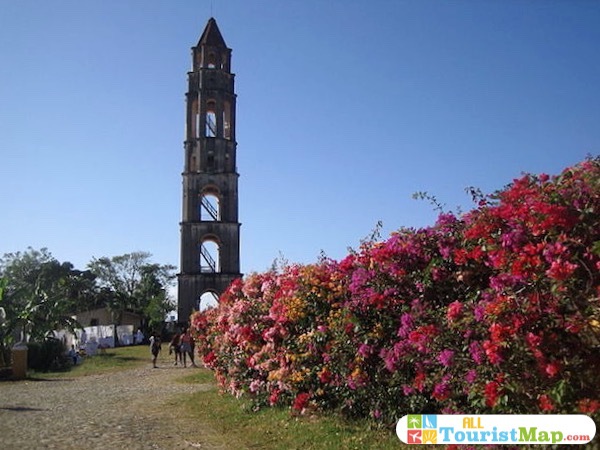 In the heart of the wonderful city of Trinidad, Cuba, is the attractive church of the Holy Trinity. Despite the scars of the passing of time and the absence of maintenance, this temple continues to be beautiful. Of neoclassical style, it dates from 1.817 to 1.892 and its construction was located in the place that occupied another basilica destroyed by a hurricane. The most important divine representation of the church is a statue of Christ called El Señor de la Vera Cruz, made in the eighteenth century. Although originally sent to Veracruz, Mexico, for three times the ships that tried to transport them returned to Trinidad due to bad weather. For this reason, it is a temple much visited by tourists and by the Cuban faithful of Trinidad.

The Serafín Sánchez Park in the province of Sancti Spíritus is a relevant site in the adjacencies of Trinidad. Its origin goes back to the XVII century, since the Ermita de la Veracruz, which accompanied the convent of San Francisco in that same century, was built in this same place. Nowadays it is a recreational and cultural development park, also there is developed part of the commercial life of the area and, in terms of architecture, is a site that pleases the eye since there are a number of buildings, including houses and other places of interest, dating from the nineteenth century and were remodeled and enjoy great color.

House of the Trova

The genres of Cuban music stand out for their unique and attractive taste, which incite dance and joy. At the Casa de la Trova, which opened in 1974, visitors can enjoy the best of Cuban music and see the local work being done to promote music and culture. This place, in Trinidad, is a museum displaying exhibits of great heritage value. In addition, it is a kind of meeting place not only for musicians but for the general population, so it is a place where culture is generated and lived to the fullest. In addition to listening to Cuban sounds, visitors can enjoy accompanying the day with drinks typical of the locality, among which the Cuban mojitos stand out, which are essential. 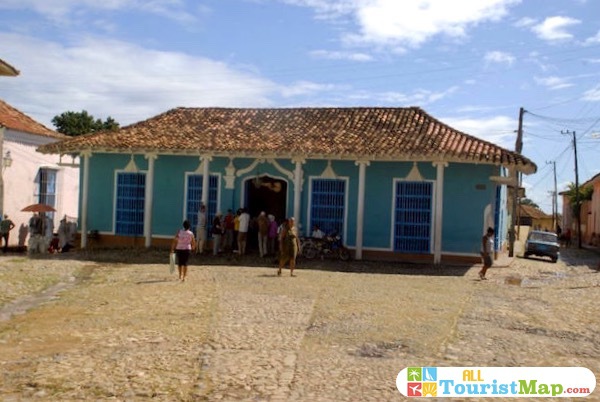 In Trinidad’s Plaza Mayor, visitors can find the Museum of Trinitarian Architecture, also popularly known as the Blue House. Its architecture consists of two buildings from the 18th century, which were merged into one and later served as the residence of wealthy families in the area. In the seventies of the twentieth century was inaugurated as a museum with eight exhibition rooms, which shows not only the local architectural value, but sculptures and crafts of national and local artists. The museum has trained guides to tell the story of the building and each of the objects in the samples.

The Plaza Mayor of Trinidad, in the centre of the town, was declared a UNESCO cultural heritage site in 1988. The most interesting thing about this place is the number of buildings that surround it, which belonged to Spanish settlers who inhabited the area during the time when there was great economic expansion by the cultivation of sugar cane and the exploitation of sugar mills. The buildings were owned by the landowners of the area, who also brought large numbers of slaves who performed the heavy work that became progress for the area. 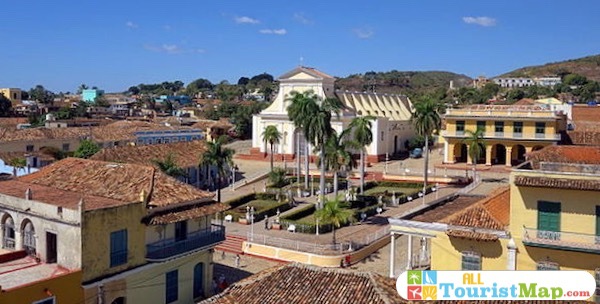 The Franciscan Monks founded and lived together in the Convent of St. Francis of Assisi between the 18th and 19th centuries in Trinidad. It also functioned as an auspice and a hostel. It had several functions throughout the years in which it was directly linked to the Franciscan order. The convent ceased to function at the end of the 19th century because the religious order ceased to function on the island and lost power. Nowadays the infrastructure can be visited and visited, as well as appreciate its architecture. There is also the National Museum of the Fight Against Bandits. 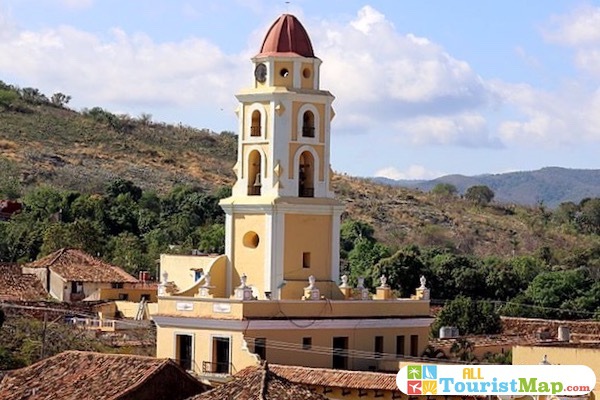 The Carbuní Falls is an ecological reservoir that is located in the Topes de Collantes Natural Park, near Trinidad, specifically fifteen kilometers from the city. This site displays beautiful natural beauties that begin to be evident after a walk along well-defined trails that gives even descending path. In the natural park you can observe the most beautiful and varied Cuban vegetation, including the country’s natural flower, known as La Mariposa. There is also a varied fauna, especially birds such as the parrot and the cartacuba.

The Romantic Museum, located adjacent to the Plaza Mayor, was the first museum inaugurated in Trinidad in 1973. It is also known as the Palace of Brunet, because it belonged to a count who had the same name. This was one of the most beautiful architectural buildings, not only in the province of Sancti Spíritus but in the whole of the Antillean island. Built in 1808, it stands out the mixture of architectural styles in which it stands out and neoclassical and with a characteristic Andalusian patio. Tourists and locals can enjoy fourteen exhibition halls displaying objects that represent a bulwark in decorative art.

Map of Hotels in Trinidad

As a town designed for tourism, Trinidad has a variety of places where you can stay comfortably. But in addition to hotels with good service and pensions, one of the options preferred by visitors is accommodation in private homes and there are more than six hundred that offer this type of service and can be contacted online. One of the best classified lodgings is the BR& La Casita de Nora, which has scores of nine out of ten in terms of care and services in relation to price. The Sofia house is another of the best reputed options in the locality, due to the fact that it also has a restaurant that offers good gastronomic options. Its rooms have private bathroom and additional services of lingerie and personal toiletries that are included in the fee-paying service.

Video of the most impressive tourist places in Trinidad