Bordered by the waters of the Caribbean Sea is Havana, a city that formally exists since 1592 and is now stopped in time, vibrating to the sound of Caribbean music, tobacco and historic buildings such as churches, government headquarters, museums and a well-defined Latino culture that made it a tourist destination that attracts no less than one million tourists a year. In this tourist map we will investigate a little more about the capital of Cuba, a city in which its two and a half million inhabitants fight for the subsistence of creative ways not to yield to the passage of time and the vicissitudes in the middle of a scenario that is debated between history and ruins, but that does not cease to be a powerful attraction for visitors, who can enjoy a land loaded with history and heritage, joy and Latin mischief in what was called The Key to the New World.

Being in the tourist city of Havana is a compendium of emotions ranging from joy to nostalgia. It covers 721 square kilometers and is located in the west of the country, is the most populated city in Cuba and the third with the largest number of inhabitants in the Caribbean and walking through its streets and monuments is entering a site whose architecture is a reflection of the mixtures between Indians, Africans and Spaniards, such as the blood of those who live there daily. The city is a kind of trip to the past, with buildings dating from the fifties and sixties of the twentieth century, many of them yielding to the onslaught of time and becoming admirable ruins after the passage of the Cuban Revolution. Its historic center, declared a World Heritage Site under the protection of UNESCO in 1982, is one of its main attractions as it is the best preserved in all of Latin America. 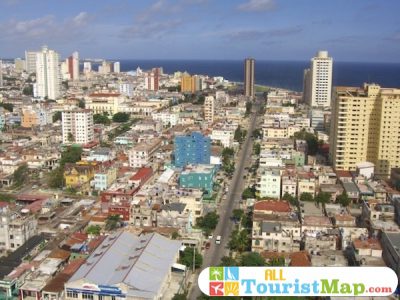 The tourist attractions of Havana are undeniable, the nature and beaches, the architectural legacy, the places outdoors, the places where to live the party and that air of history that exists in all the city are the best incentives and it is something that the Government knew how to exploit, since it is the main source of income in foreign currencies that the island has. The tropical climate and the winds of the ocean currents make it pleasant throughout the year, with temperatures ranging between 22 and 26 degrees Celsius. Rainfall is constant, but is emphasized in the month of October, December is the favorite month for many tourists to travel there, especially because of the benevolent climate of the temperature. To reach Havana, the main gateway is the José Martí International Airport, an air terminal located in the south of the Cuban capital, 20 kilometers from the downtown area. This infrastructure has links with the European continent, with North America and Latin America, as well as with local destinations. To move internally, the most traditional public transport are the buses known as guaguas, the city also has bus routes and if the visitor prefers, private buses. However, there are also many taxi services, whose fares can be expensive for tourists.

The diurnal life of Havana is an attraction in itself, to see its inhabitants run between the daily life stopped in time, between historical buildings and architectural jewels placed on the shores of the waters of the Caribbean Sea, as well as a night life, full of Latin music and flavor that emulates the best cabarets, is part of the offer offered by this tourist destination. This is the city of open-air concerts, of children playing in the streets and men trying to drive around the city in cars so old that they no longer circulate in other parts of the world. This is the city where most tours can be done on foot and visit El Capitolio or Plaza de las Armas, enter the mythical Bodeguita del Medio that Ernest Heminway immortalized or visit the Havana Club Rum Museum.

What to visit in Havana

Havana’s Malecon is a seaside infrastructure from which you can appreciate the best of the city’s 20th century architecture, whose construction began in the early 20th century and culminated in the 1950s. It is crossed by a wall approximately one meter wide, covering about twelve kilometers from the bay to the Almendares River. It is an idyllic place, the main meeting point between the Habaneros and a must for tourists. It has been the scene of long conversations, falling in love and funny and romantic moments. It is one of the recreational sites in the city, where you can go from fishing to refreshing walks on foot.

The Colón Cemetery in Havana is one of the most beautiful and solemn infrastructures in the city. It has an impressive architecture in rectangular form, with funereal monuments erected in marble and granite, streets and sidewalks well distributed in which it is easy to walk and make the journey. The place became a center of tourist attraction since it has almost a century and a half of existence and inside rest the remains of notable Cubans both in political and cultural matters around which there are a series of legends, so there is availability of guides to know the place, although it can also be done without the presence of them.

José Martí Square, in the sector known as El Vedado, was erected in honor of the hero of Cuban independence. It is an infrastructure that became a political and social icon of Havana since it was the scene of many demonstrations and summit moments in the recent history of the city. In this square there are two important and interesting places for visitors, the first is El Memorial, a place of worship to the memory of the historical hero. The other is known as El Mirador de la Raspadura and is a monument 109 meters high, from where you can appreciate one of the best views of the city.

Quinta Avenida, in the municipality of Miramar in Havana, is one of the most cosmopolitan places in the city, since it is a neighborhood in which the most beautiful residences are located, surrounded by a beautiful coastline. In recent years it has become an emerging place, business center, commercial and hotel of the city, also has tourist attractions in terms of urbanism, luxury accommodations and the best restaurants of high category in which exquisite dishes are served based on marine gastronomy. It also has an attractive nightlife due to the number of bars and dance clubs where you can taste delicious alcohol-based beverages. 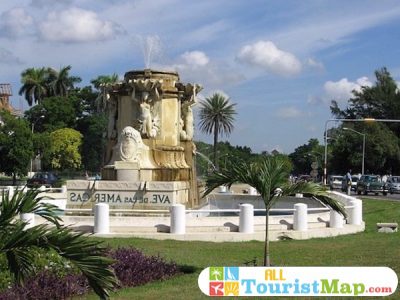 The Hemingway Marina is an impressive place named in honor of American writer Ernest Hemingway, whose stay in Havana left valuable cultural footprints. This structure, which is the scene of international regattas and fishing tournaments, is on the seashore on Fifth Avenue, has four canals five meters deep and can dock up to forty boats, from the simplest to large yachts. In the surroundings there are a series of luxurious hotels, bungalows and restaurants, there are also beautiful houses and bars where you can enjoy good moments of enjoyment and even dance to the Caribbean rhythm.

The Plaza Vieja is a structure designed under the architectural styles of art-deco and baroque, which is undoubtedly one of the most visited places and symbol of Havana. In the first half of the 20th century, during Fulgencio Batista’s mandate, it was an underground car park that was demolished in 1996 during a renovation that was done in its structure, then in the place were carried out from parades to military exercises. Today it is one of the most eclectic and dedicated to tourism. It is surrounded by a series of bars, restaurants and buildings dating back to the 17th, 18th and 19th centuries. 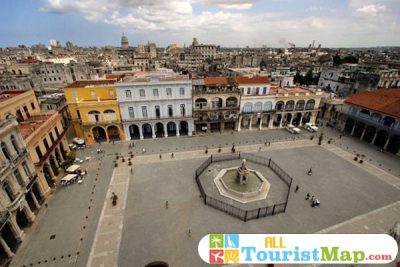 In Havana’s San Cristóbal Cathedral rested, for more than a hundred years, the mortal remains of Christopher Columbus, the navigator who went down in history for discovering the American continent. This religious temple is one of the oldest in America, built in 1787, after forty years of construction. It is located near the Cathedral Square, in Old Havana and around it are a number of buildings of baroque style, such as the temple that to pass from its towers are asymmetrical or unequal, the structure in general is attractive and of a beauty that falls in love.

La Bodeguita del Medio is the most famous bar in Cuba and perhaps in the Caribbean. Its fame came from the presence of the American writer and Nobel Prize for Literature, Ernest Hemingway, who used to drink the famous mojitos in this place and turned it into a place of worship and pilgrimage. Placed in the adjacencies of the Cathedral Square, it is a place of forced visit for the tourists, as much by the drinks as by the history that surrounds it, since its walls are full of names and writings of the people who passed through there, some of them characters with world-wide fame. 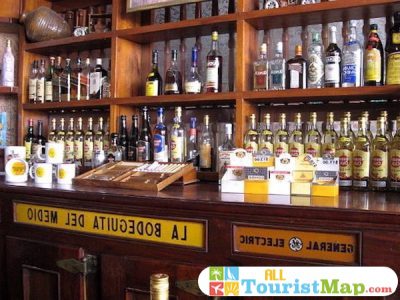 Another place whose fame and importance is due to the presence of Hemingway and became a place of worship and pilgrimage is the Hotel Ambos Mundos, near the Plaza de Armas, in downtown Havana. Room 511 of the hotel was the first dwelling in which Hemingway lived during his time in Cuba. Proof of this can be seen in the walls of the reception, where a large number of photographs of him are displayed. Between 1932 and 1939, the American writer wrote works such as Tener y no tener and Las Verdes Colinas de África, among others. He also concluded Death in the Afternoon. 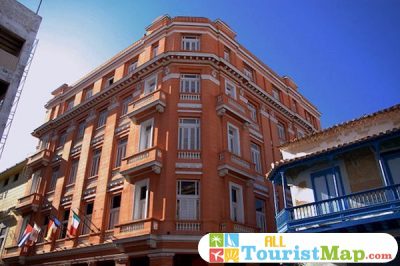 The Christ of Havana is an immense sculpture whose weight of 320 tons is proportional to its twenty meters high, erected in honor of the Sacred Heart of Jesus under the hands of Jilma Madera, a Cuban sculptor. It is located on the other side of the bay, and from there you can see beautiful views of the area known as Old Havana. It is located right next to the Casa del Ché, other places of worship in the city in honor of the revolutionary character Ernesto Ché Guevara. 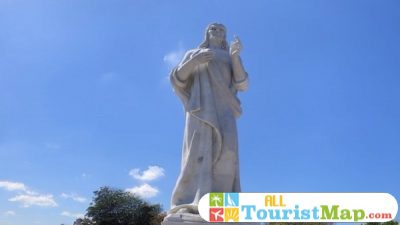 As a city dedicated especially to tourism as the main source of income, the hotel offer is very wide and there is a diversity of accommodations, from those that are luxurious to the simplest that provide for a variety of budgets. But those who specialize in lodging indicate that the best lodging experience, with which you can learn more about the culture and way of life of Havana, is to stay in the lodging houses, which are rooms in the homes of Cuban families that have signs as a foreign currency lessor, are authorized to provide this type of services and is a cheaper and more versatile option. These lodgings are authorized by the Government and have a service license, even though they are ordinary houses. The rooms generally have bathroom and comforts in the city, such as lingerie and toiletries, the cost is about twenty euros per night, although agreements can be reached with the owners. Some of them offer breakfast or lunch service.

Video of the most impressive tourist places in Havana