When you think of a truly multicultural city and an active cosmopolitan urban widow, the description fits perfectly with Toronto, the economic capital of Canada and capital of the province of Ontario. Its proximity to the mythical Niagara Falls increases its attractions, which we will detail in this tourist map. On the shores of Lake Ontario, this is one of the most cosmopolitan cities in Canada and a metropolis that leads the trends in finance, business services and telecommunications, not only in the country but in the world. It is an important centre of migration, since almost half of the population is not native to there and it offers its inhabitants and visitors, some four million a year on average, one of the highest quality of life indices.

The tourist city of Toronto was formed by the merger of more than eighty nationals who emigrated to the metropolis during the last two hundred years. This means that among its attractions are the countless neighborhoods that are representative of the people from other countries who chose Canada to live in. In fact, it was named by the Canadian government as one of the cultural capitals and its quality of life index, one of the highest in America, made it one of the best cities in the world to live in. Toronto was initially colonized by the French in 1750, but they left the city nine years later, until during the U.S. War of Independence, British settlers loyal to the British Empire arrived in the city in 1787 seeking refuge and turned it into a British naval base. Today, it is the financial center of Canada and the second most important city in the country. 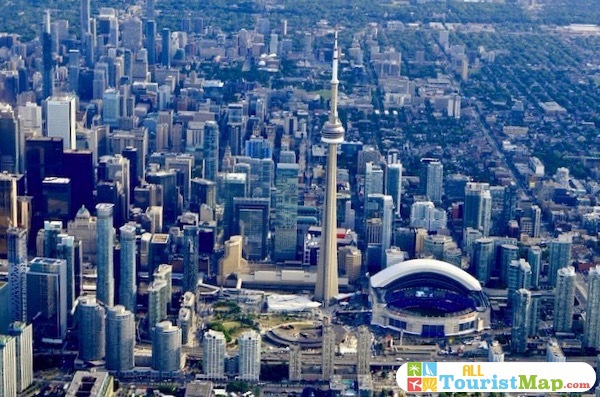 The tourist attractions of Toronto are countless, because although it has few historical buildings it compensates with the cultural aspect, since it is the capital with the largest number of theaters, about 44 in total, as well as the birthplace of the Royal Ontario Museum, the most important museum in the country. It also has natural wonders that begin with the proximity to the mythical Niagara Falls, an hour from the city, as well as the possibility of excursions to Lake Ontario and a walk along the pier that offers local beautiful Canadian crafts. Toronto also stands out for its cuisine, based mainly on venison, caviar and salmon. The city can be enjoyed at any time of the year, since it has a mild climate in relation to other parts of Canada. Its winters are cold although not as cold as Montreal’s and its summers are hot and humid. The days in Toronto begin very cold and the four seasons of the climate are felt to their fullest.

Toronto is a formidable tourist destination, full of modernity with the presence of imposing skyscrapers and a structure in the best style of North American cities, but at the same time with many old buildings that tell the colonial history of the city. Visiting it is the opportunity to enjoy natural parks and open air sites such as zoos and amusement fairs, theater and concert halls, as well as a great variety of culture. One of the favorite places of the visitors (and of the own ones) is the YongeStar Street, with great amount of restaurants and very little traffic, reason why it is one of the favorite ones to walk and to cross. Gastronomic tourism is also important, since it has some 3,000 restaurants, including gourmet, luxury and more simple ones, with food representative of the colonies that live in Toronto. To get there, you can access it through the two airports it has: the Toronto Pearson International Airport in the neighboring city of Mississagua and the Toronto City Centre Airport, in the Toronto Islands.

What to see in Toronto 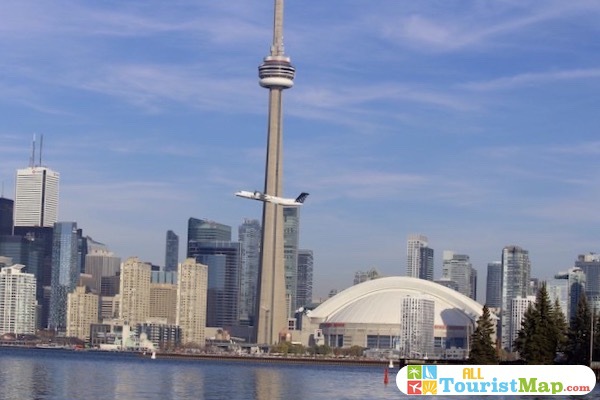 The CN Tower is Toronto’s landmark building and is located in the city centre near the waterfront. It was built on the land of a former railway company called Canadian National (hence the acronym of its name). Opened in 1976, it is the fourth tallest building in the world, with a total height of 533 meters. One of its greatest attractions is the Skyline, but in its early days it was the most important communications tower on the planet and the tallest in the world. This is one of the most important structures in America and therefore attracts hundreds of tourists a day. From there you can appreciate one of the best views of the city. 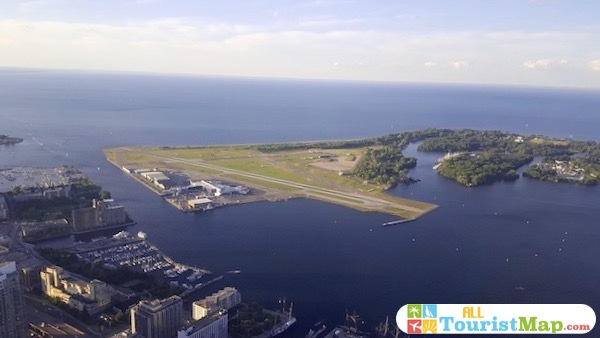 The Toronto Islands are one of the main attractions of the city, located in front of Lake Ontario. They are one of the main natural parks since they are two hundred hectares of green areas that can only be accessed by boats. Visitors can do activities such as barbecues or enjoy a day at the beach. In this place there are areas where you can dispense with the use of swimsuits if the influx of visitors is low. From these islands there is also a nice view of the metropolis of Toronto and its buildings located in the Downtown.

Niagara Falls is not exactly within the city of Toronto, but its proximity means that it’s definitely one of the city’s tourist attractions. This natural wonder is an hour and a half away from the city if you travel by bus. To access this beautiful and impressive natural landscape from the side of Canada that offers the best perspective (since it also has a view from the United States), Toronto offers tourist packages and exclusive bus lines for transportation. There you can see two main waterfalls, the Horsesho eFall which is the highest and the American Fall, which is smaller. 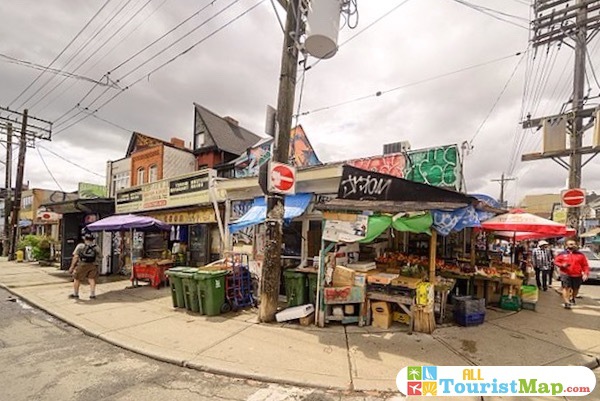 Kensington Town is the young, fresh, multicultural and alternative part of the city. It’s a small place in downtown Toronto. It is also known as a hippie area where you can find bohemian cafes, second-hand clothing stores, light food and vegetarian restaurants. The atmosphere is adorned with many psychedelic-style murals that emphasize color and harmony, as well as a quiet atmosphere away from the hustle and bustle. It is so important that in 2006 it was designated as a National Historic Site of Canada. When visiting it, it is advisable to go to Fire Station Number 8, Tom’s Place, Bellevue Square Park with a statue of the actor Al Waxman and St. Stephen’s Community House. 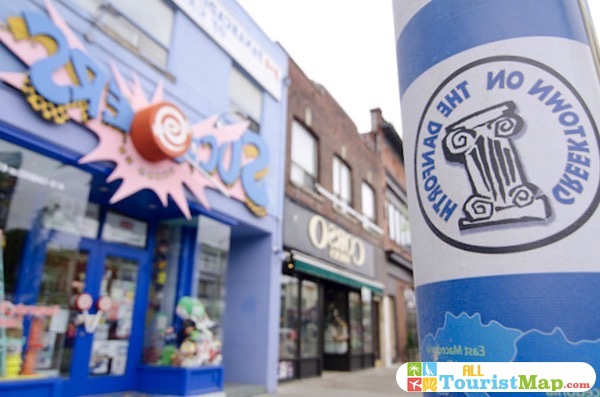 If there’s one thing that stands out in Toronto, it’s multiculturalism. This is evidenced by one statistic: about fifty percent of its population comes from migration. And it is also evident in the number of slums where the way of life of the most important ethnic groups is exposed and from where you can appreciate the culture and gastronomy. In this sense, the Chinatown in the centre of the city stands out, the Little Italy and Little Portugal in the west, the Greektown in the east, together with the settled communities of Pakistan and India, among so many colonies of countries that chose Canada as a migratory destination. 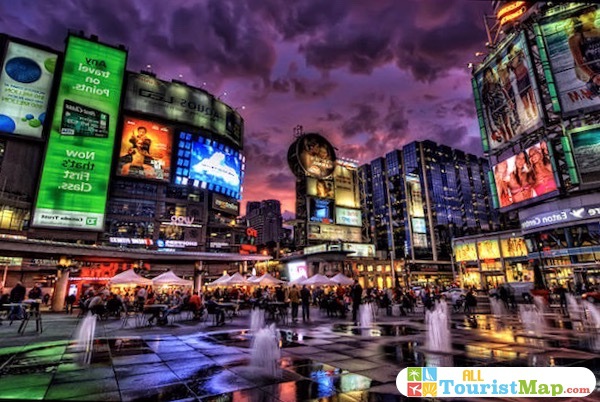 Dundas Square is in the heart of downtown Toronto and is easy to find. At some point, everyone will have to walk there because it’s close to the Yonge, another of the metropolis’ landmarks. Dundas Square hosts a number of cultural and entertainment events throughout the year, so it’s a good place to experience the metropolis in a fun and relaxing way. It is notable for the large number of illuminated signs and avant-garde buildings. In addition, another of its attractions is that within this area is the Eaton Center, a shopping center of the most beautiful, with transparent glass roof and became a meeting point in the city. 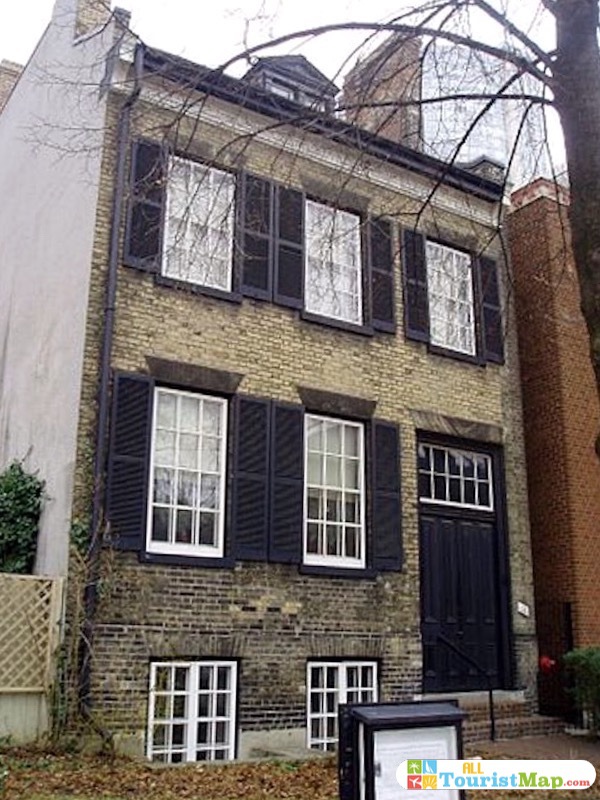 The Mackenzie House is a museum that was initially the home of the first mayor of Toronto and built in 1830. Today it is the ideal place to learn about the history of the city. In this museum, designed in the style of Georgian architecture, you’ll not only be able to see old artifacts, but it also has the peculiarity that you can taste typical dishes, made with old recipes. As an additional tour, it is also recommended to go to the Art Gallery Ontario, one of the most important museums in North America where you can appreciate some 24 thousand works that range from the Middle Ages to modern times. You can also see a collection of textiles and shoes. 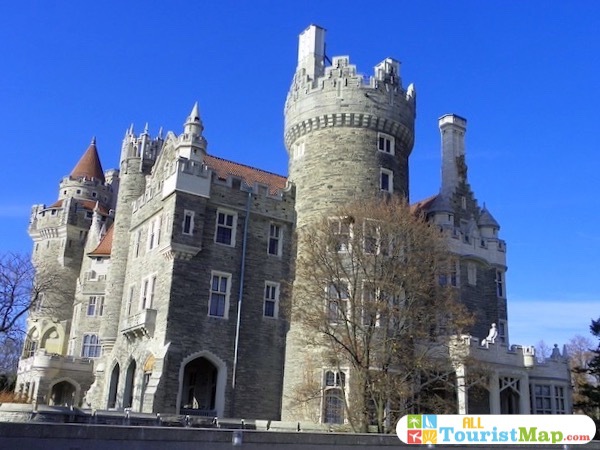 Casa Loma is a castle built in 1914 by an eccentric and successful millionaire named Henry Pilatt. It was initially intended as a residence but is now an attraction due to its medieval fortress structure. Its two floors occupy some 6,011 m² with service quarters. At the beginning it cost about 3.5 million dollars. Inside this building is one of the busiest restaurants in the city and the facade of the castle is frequently filmed for movies and television programs such as X-Men, Chicago, The Tuxedo, Harry Potter and the Deathly Hallows, among others. The unfinished third floor is also home to the Regimental Museum for the Queen’s Own of Canada Rifles. 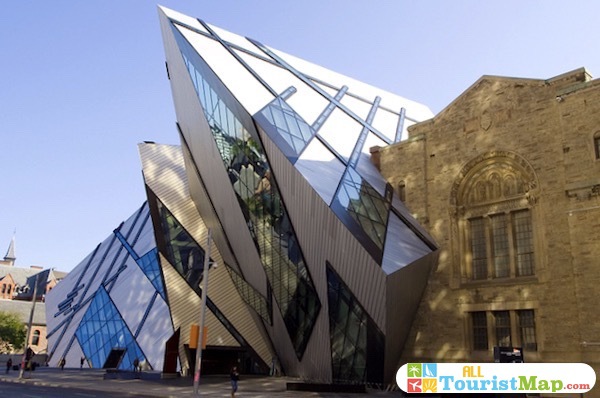 The Royal Ontario Museum is the cultural emblem of the city. Its exhibitions deal with nature and culture, not only of Canada but of the world. During its more than 100 years, it opened for the first time in 1914, this room has exhibited in its 40 galleries, six million articles among which are archaeological discoveries from all over the world and prehistoric animals, as well as art shops. But not only does it tell the story of life through natural history, it also has an art gallery that has about 68 thousand works by world-renowned artists of historical importance such as Edgar Degas, Pedro Pablo Rubens, Vincent Van Gogh, among others.

Canada’s Wonderland is one of the most impressive theme parks in Toronto. It is ideal for family outings that include children, as they can enjoy 130 hectares of land divided into ten different themed areas. There are more than two hundred attractions and rides available for both children and adults and the site offers maximum safety to its visitors. A similar tour and option is to visit the Toronto Zoo, founded in 1974, which offers six areas with animals of all kinds, ideal for family enjoyment. It has been the most visited seasonal amusement park in North America for several consecutive years. You can visit it at any time and enjoy its special events, such as the one that opens in October to celebrate Halloween. It also has 16 roller coasters and a water park called Splash Works.

Toronto’s status as a financial and technological reference city means that there are many accommodation options in the metropolis that can be adjusted to suit all budgets. Users point out that the best area to stay is the EntertainmentDistrict, since it is the place where the greatest number of restaurants, theatres and bars in the city are concentrated. In this area, hotels have an average price of one hundred euros per room, per night. If the budget is a bit lower, the recommendation is Chinatown or Barrio Chino, which besides being cheap (the cost of rooms per day ranges between 50 and 60 euros), is also a safe area. A good option, although not centrally located, since it’s in the north of the city, it offers security and good prices, as well as the largest hotel offer in the city, with modern accommodations. The site is accessible by train and tram.