The Egyptians think that Cairo is the mother of all cities, and perhaps they are right. But what is certain is that it is a city with more than sixteen million inhabitants in its metropolitan area alone, making it the eleventh most populous city in the world. In this tourist map we invite you to get to know a mythical city that has an extension of 553 square kilometers. Located on the banks of the biblical Nile River, this city, which has existed since ancient times, lives on the border between the historical and the modern, where large buildings may be pyramids or modern constructions.

Walking through the tourist city of Cairo is to encounter an environment that can be dichotomous, since in the midst of modernity, the city is full of narrow streets, of Islamic buildings so old that they give the feeling of walking in the middle of the medieval era and coexist in harmony with modern buildings. In other words, there may be a luxury building next to one that may be hundreds of years old and which is marked by austerity. The city can be divided into two, according to what is found on the river Nile. On the east side are the great pyramids, which are like monuments and most of the population in this area is Islam. On the west side, also known as Old Cairo, are the great religious buildings, concentrated within a Roman fortress of Babylon called Coptic Cairo. The city lives in a constant process of expansion, growing continuously towards the east, especially in the area where the airport is located, where there are also the residential neighborhoods where most of the wealthy families live. 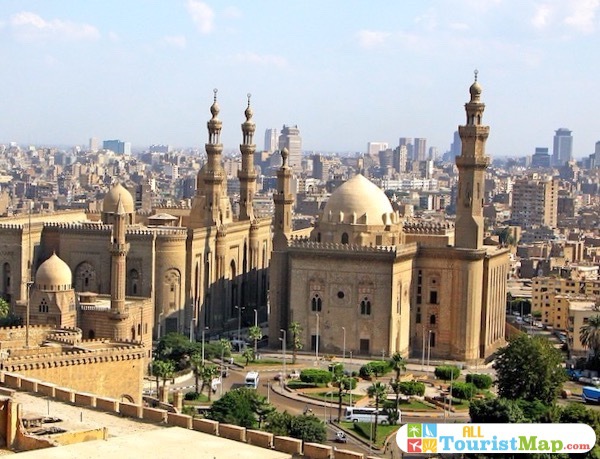 Cairo has tourist attractions that will not be found anywhere else in the world and therefore is the tourist destination chosen by thousands of visitors a year. Travelers arrive to marvel at the pyramids, the streets that are small, rather narrow, and feel as if they are guarding an endless number of mysteries. Tourists also seek the experience of visiting Coptic churches, mosques, living the experience of shopping in the old bazaars that contrast with the large buildings in which there is a real expansion in the area of finance and trade. Cairo is that city where some inhabitants can go in expensive modern cars and others can go in horse-drawn carts, transporting food, and none of that is strange but part of everyday life. Visiting it can lead to a love-hate relationship. There are those who find a fascination among the marked contrasts of the millenary city that gave way to modernity in the capital of Egypt, but without giving it all the concessions. And, although it is common to find a lot of begging, this is a prosperous and modern city in which religiosity is reflected with the great number of temples and mosques.

South of the Delta, between the valley of the Nile River and near the necropolis of Memphis is the capital of Egypt, Cairo, whose desert climate is complemented by the humidity of the valley and the sand storms of the Sahara that come to this metropolis during the months of March and April each year and although brief, can last for several days. The temperatures in the capital of Egypt are marked, making emphasis in that in summer it reaches the forty degrees and in winter it can arrive at five degrees. This is the city in which the nights are cold, but the day can exhaust those who are not used to high temperatures. In Cairo it is difficult to rain because a dry climate predominates, but when it does, the rains usually cause damage. It does not snow either, only once was reported the presence of hail in the city, but what happens is that the winters are cold and that the rains come at this time of year. The capital of Egypt is the only city in Africa that has an underground transport system, the Cairo Metro, which was created in 1987 and has two main stations. About twenty-two kilometers from the northwest area of the city is located its airport, Cairo International Airport, which operates domestic and international flights constantly and for those who do not want to fly to destinations within the country, have the possibility of doing so through rail.

What to visit in Cairo

The pyramids of the Giza necropolis are the most representative iconography of Cairo. Three of them stand out for their historical and cultural value. The one of Cheops is the highest and oldest, it measures 145 meters and it was built 4,500 years ago and it has the most complex internal system, it is followed by the pyramid of Kefrén that measures 143 meters and a half and it has a simpler structure, and finally the one of Miscerino, that is accompanied by three minor pyramids. But, in this citadel there is a series of minor pyramids, temples, graves and the sphinx, a monument of twenty-two meters high, with a human face and a lion’s body that was carved in limestone. All this makes it an extensive funerary complex that delights visitors with its mysteries surrounding death cults and the possible concealment of pharaonic treasures. 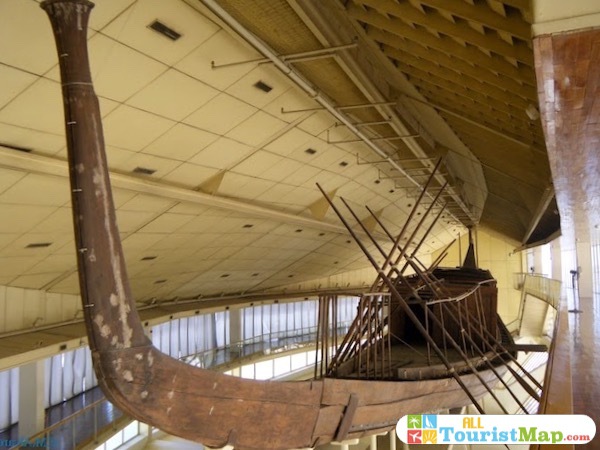 Located in the Giza Necropolis, a burial complex with a series of pyramids that are the most culturally representative in Cairo, is the Solar Boat Museum and it is there that you can learn a little more about the advances in navigation that existed in ancient Egypt. The main attraction is a reconstructed boat with the remains of one that was found near the pyramid of Cheops, built with cedar from Lebanon, and which is 43 meters long and a meter and a half deep. From this boat it was possible to know details about the Egyptian methods of navigation. 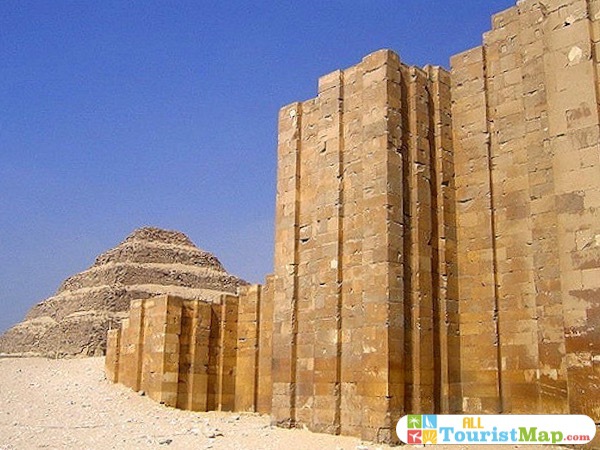 Twenty-five kilometres from Cairo is Memphis, which was once the capital of Egypt in the year three thousand BC and of which there are now ruins that look like a large open-air museum. Three kilometres from it is Saqqara, which was the necropolis where the pharaohs were buried at that time. Memphis and Saqqara are worth visiting because of the beautiful monuments such as pyramids and sphinxes that remain standing. One of them is the step pyramid, whose construction was requested by the Pharaoh Dyoser, who wanted to go up to the sky to talk to the dead gods and pharaohs. In Saqqara there is also the Serapeum, which is the underground necropolis where the sacred Apis bulls lie. 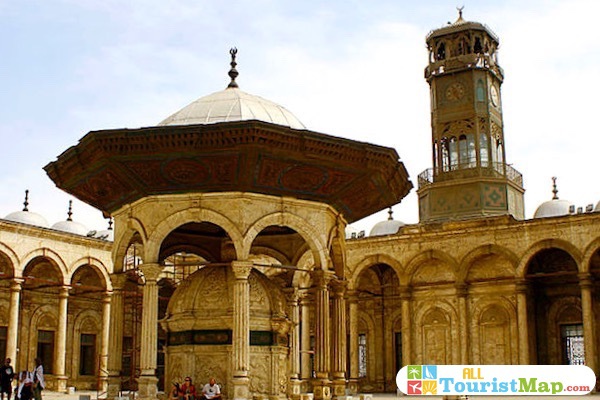 The Citadel of Saladin is a fortified citadel, located in the hills of Cairo. It was constructed in the year 1.171 by orders of Salaheddin Al-Ayoubi, it was the one who established in the same year the Islam as religion in Cairo. And although at present only ruins of the citadel created to protect the great city remain, historical vestiges of the Palace of Saladin, place that was a royal residence, as well as of the many mosques that there are in the site. Among them is the Alabaster Mosque, built with this type of material in its crystalline form in which stand out the dome that measures 52 meters high and 21 in diameter. 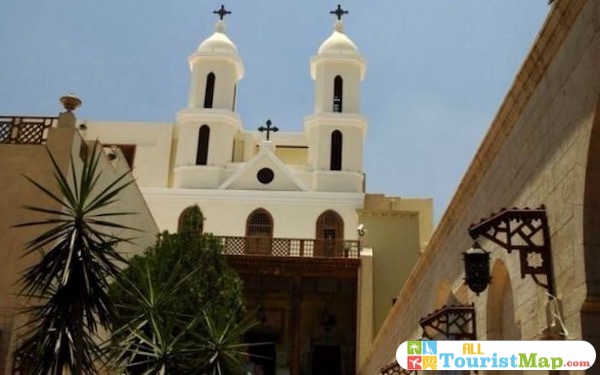 The Hanging Church in Cairo, now known as Kenisa Al Moallaqa, is one of the must-see monuments in Cairo. It is said to be hanging because it is located right at the top of a Roman door, over the remains of a Babylonian fortress, and to enter it you must use a staircase that is literally hanging. Inside there are relics representing life and death, an altar covered with mosaics and made of marble, as well as seven other altars made of ebony and cedar wood. 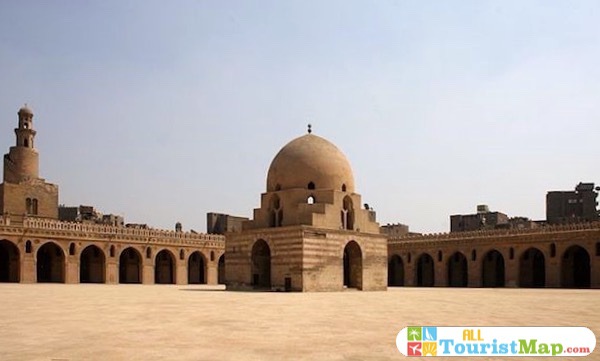 The IbmTulon Mosque is one of the oldest, but it is also by far the best preserved among those in Cairo. It is one of the first to be built in the metropolis, in fact its date of construction indicates that it was built in the year 871 of the Christian era. This mosque, although it has a simple structure, is also one of the largest and calls attention to the materials that were used to build it, based on wood and clay bricks. Its decoration is also one of the simplest, they do not have many ornaments but it is a faithful representative of the Islamic architecture of the medieval era.

The construction of the Sultan Hassan’s Mosque started in 1356 and the works were prolonged for four years. At present it is an emblematic building of the Islamic world in Cairo and the rest of the country for having an extraordinary beauty and its large size, as it is one of the largest in the world and whose structure has four ships with ample space, in which they practice the so-called four cults. It has a mausoleum made of marble, in which there are a number of inscriptions from the Koran. Also its patio is wide and very sober. 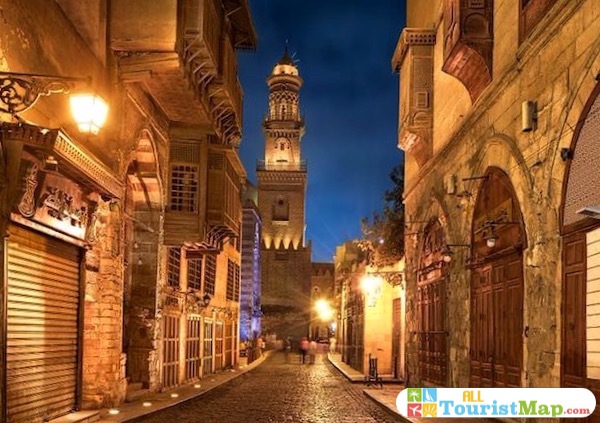 Bayn al-Qasryn is a tourist complex located in Cairo, which stands out for its exuberant and complex beauty, capable of stirring up emotions in its visitors. This structure, which was initially a public square in the Egyptian capital in medieval times, is now one of the most visited tourist sites, as visitors are attracted by three Mamluk palaces that have vital religious and architectural importance: the Mausoleum and Madrasa of Qalaun, the oldest structure there because it was built in 1279, the Mausoleum of An-Nasir Muhammad, founded in 1304 and the Madrasa of Sultan Barquq, in the year 1386. 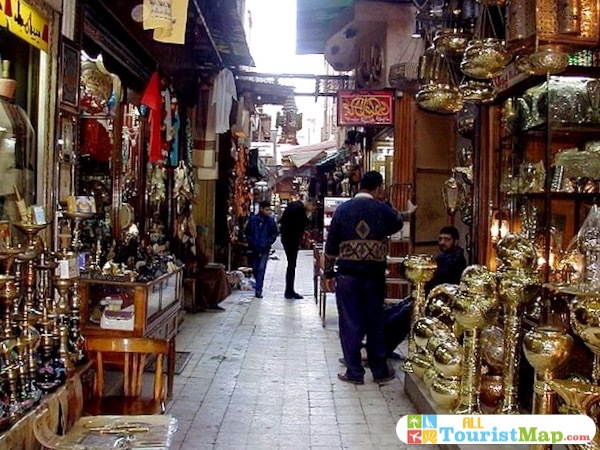 Khan El Khalili is also known as the Kaleidoscope of Cairo. It is a huge open-air market where you can buy all kinds of crafts and antiques, although not original but imitations, you can also buy clothes, handmade shoes, lamps, vases and all kinds of ornaments and decorations. Like any popular market, it is full of sellers who almost “jump” over the users to draw attention. Although the things or products that are purchased are of great beauty, one of the most important aspects is to be willing to negotiate prices, since they can be very high. 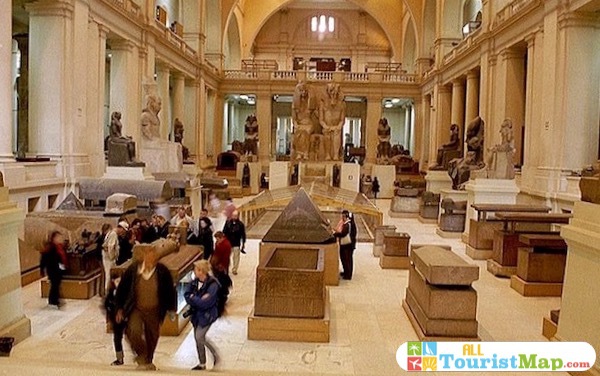 In downtown Cairo, on Tahrir Square, is the Egyptian Museum, one of the city’s must-see sites. The main antiques of the Egyptian world are in this place, a very big structure, almost gigantic, in which there are a series of exhibitions that give the impression of being placed in a random or disordered way. But, it’s right there where people can meet the famous treasure of Tutankhamun or see the real mummies up close.

Cairo lives from and for tourism, so the so-called industry without a chimney is its main source of income and that means that it has a wide range of hotels, which includes all types of accommodation, from the most luxurious to the most economical, although it should be noted that the capital of Egypt is not usually an expensive city. For visitors the first choice of accommodation is the historical center and the adjacencies to the El Tahrir Square, because it gives greater access to tourist sites of interest such as mosques, churches and traditional markets. But it is a place that accumulates a lot of people and activities, so it will not be a quiet place to stay. The less convulsed area with the luxury hotels is twenty kilometers from Cairo and is called Giza. There is closer access to the pyramids and the necropolis. Throughout the city you can find hotels with costs ranging from forty to sixty euros and offer breakfast services. Other more ostentatious ones cost up to 120 euros per day, but they are luxury hotels.