In the middle of the world and surrounded by four volcanoes and snow-capped mountains is Quito, the capital of Ecuador. A city of extreme beauty and cultural capital that falls in love with its natural beauties, idyllic infrastructure and mythical legends of a heroic indigenous past in an indomitable setting full of hills and ravines. We elaborated this tourist map to reveal the secrets of a historical city, anthological and full of culture and indigenous power, long before the arrival of the Spanish conquerors. Quito, in the south of America, is the city in the heights in which the modern and the autochthonous of its original population converge, a tourist center par excellence, not only of Ecuador but of Latin America. It was the first city in the world to be declared a World Heritage Site under the protection of UNESCO, in 1978, so it has the best preserved colonial historic center in the entire continent.

At 2,800 meters above sea level is the tourist city of Quito in Ecuador, a city that exists since the twelfth century and which coexisted indigenous castes that were in dispute when the city was discovered by Spanish settlers in the sixteenth century. With more than two million inhabitants throughout its metropolitan area and formally known as Santiago de Quito, was founded in 1534 and although it is a modern town, which grew exponentially in the seventies of the twentieth century thanks to the oil boom, still retains that indigenous charm that makes it equally accessible, for example, buy in trendy stores as access to craft markets made by indigenous people. It is currently the second most populated city in this Latin American country and concentrates within its geography buildings in which politics, the financial and institutional center are developed and in which all the transnational companies and international organizations operating in Ecuador coexist. Quito is the mixture between a modern and flourishing city in the middle of an indomitable nature, in which it is common to see volcanoes such as Pichincha, Cotopaxi, Cayambe and Antisana and to be, literally, in the middle of the world. 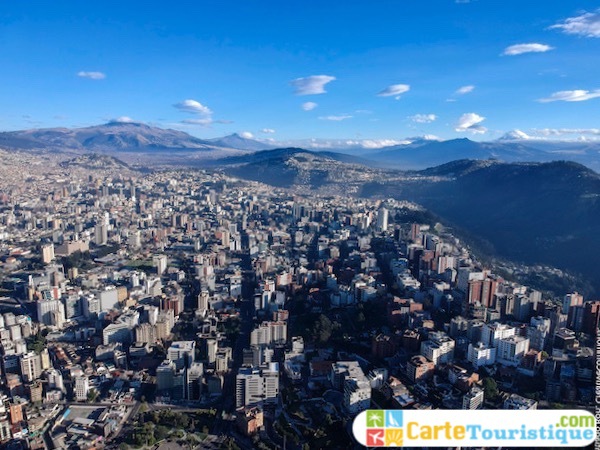 Quito’s tourist attractions begin with beautiful panoramas of a historic center in which a millenary culture emerges, which boasts of being within a nature uncommon in the rest of the South American cities. This is how from the highest city and half of the world you can observe volcanoes and the mountains that surround the city, walk through a historic center that recalls the life of the sixteenth century and then, in the same place to reach the sites that bring you back to the twenty-first century, with restaurants, bars, discos and shops where you can buy from the simplest to the most luxurious. Its oceanic climate makes it a place with low temperatures at night and a heat that oscillates between 25 and 26 degrees Celsius during the day, and it is important to be physically prepared to deal with the so-called altitude sickness, to get there by air or more common is to use the Mariscal Sucre International Airport located in the middle of the city, named after the Grand Marshal of Ayacucho Antonio José de Sucre, Venezuelan hero known as the Abel of America, who was the hero who conceived Ecuador’s independence. The historic center can be traveled on foot, but users can travel the rest of the city using public transportation through the Integrated Transport System, which includes subway, metrobus and a bus network.

Quito is the city in which diverse ethnic races coexist in which mestizaje predominates. Its historical and multicultural value made it worthy of being elected as the American Capital of Culture in 2011 and during the journey you can visit the Seven Wonders of Quito, selected on the basis of its geographical, cultural and historical legacy. Thus, visitors can walk through steep streets and climb steep hills through the cable car from where you can enjoy the ecosystem of the Andean moor, you can also literally step on the equator that divides the world into two hemispheres. This is a city from which you can get to know and discover South America.

What to visit in Quito

The Historical Center of Quito, located to the south center of the city, is not very big but it is the best conserved of America and in addition it is Cultural Patrimony of the Humanity. It is a tour of 320 hectares, five thousand buildings of heritage and about 130 buildings in which you can see a range of pictorial art in which religion is predominant. They are houses, squares and churches in excellent state of preservation that makes the visitor make a trip to the past that in addition to tourism is educational and even the police are educated to provide information to the visitor. One of the attractions is to travel at night, in which you can make trips in horse-drawn carriages, as it was in colonial times.

Middle of the World City 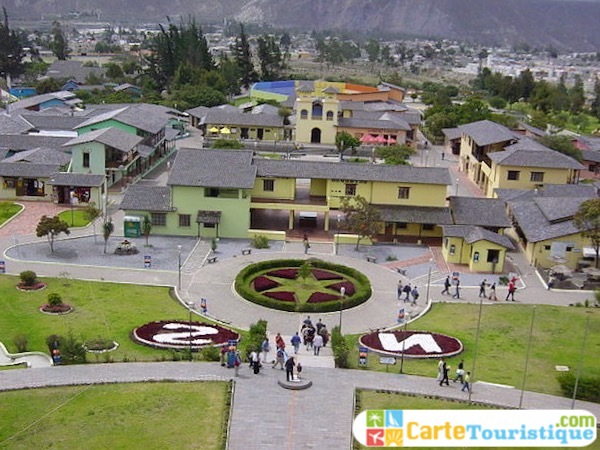 In Ciudad Mitad del Mundo visitors can learn a lot about the ancestral culture of Quito and Ecuador through the gastronomic offer and the exhibition of traditional rites of the main ethnic groups that inhabit the country, so it is one of the stops when you go for a tourist visit. In the Middle City of the World there is an ethnographic museum, planetarium, a special pavilion with a monument of more than thirty meters high in honor of the French geodesic mission that made special contributions in the locality in the eighteenth century and physically represents the half that divides the world into two hemispheres. In the park there are areas where musical events and other artistic expressions take place. 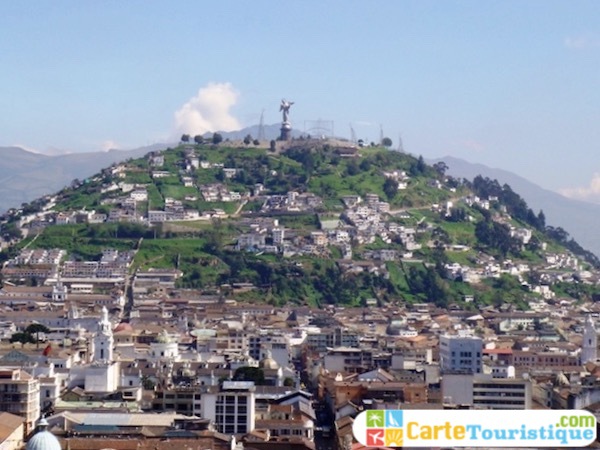 Three thousand meters above sea level is El Panecillo, a natural elevation in the center of the city that became the tourist vantage point par excellence in Quito. From there you can see an urban panorama starting from its historical center and unfolding towards the north and south of the city. In addition, in this same place it is also possible to visit the Virgin of Quito, a sculpture elaborated in aluminum with seven thousand different pieces by the hands of the Spanish sculptor Agustín de la Herrán Matorras and that represents an icon sculpture of the denominated School Quiteña Colonial. 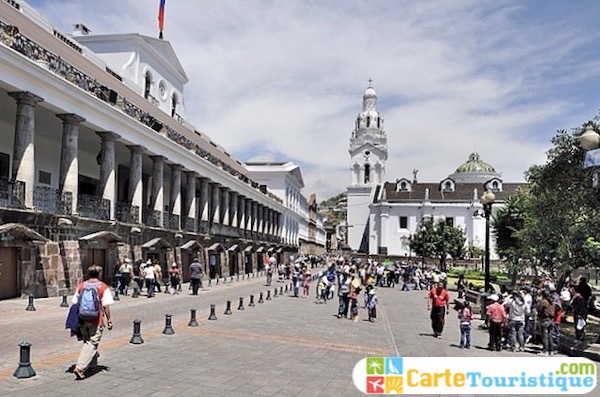 The Plaza de la Independencia, also known as Plaza Grande, is in the historic center of Quito and is the main reference point and meeting point in the city, a place where you can also observe the dynamics of a quiet city. It is the place where older people gather to talk in the surroundings and where there are a variety of restaurants and cafes to spend a pleasant time and enjoy good food and traditional dishes, there is also a range of shops that sell handicrafts. From there you can easily access other places of tourist interest, especially the PalacioCarondelet which is the seat of the Ecuadorian presidency, and the Municipal and Archbishop’s palaces.

Half an hour’s drive from Quito you can access Ilaló, an inactive volcano whose volcanic activity is expressed through hot springs. This natural condition turned it into a center where hydrotherapy can be performed and natural recreational sites such as the spas of Cununyacú and El Tingo, among others, can be accessed. In theIlaló you can do ecotourism, there are guided tours with experts, and this consists of walks from the area of Tumbaco to La Cruz and do activities ranging from cycling, camping and bird watching.

Church of the Society of Jesus

The Church of the Society of Jesus in Quito is a colonial architectural jewel, built under the Ibero-American baroque style and with a special touch since it was founded on gray stone of volcanic origin. This building is a faithful representation of the so called Colonial School of Quito, as well as the works of art of pictorial style that are shown inside the temple, many of Bernado de Legerda’s style. It was built in 1605 with the arrival of the Jesuit order to the Ecuadorian capital, formerly known as Audiencia de Quito. Its construction lasted 160 years and was inspired by the Church of Gesú in Rome, Italy.

Basilica of the National Vote

The Basilica of the National Vow, in the center of Quito and next to the convent of the Oblate Fathers, is one of the most representative religious temples of the American continent because it is one of the largest after the discovery of the new continent. It is the highest building of the city because it is 115 meters high and 24 internal chapels that represent the provinces of Ecuador. It is also a standard of Neo-Gothic architecture in the nation and was built in honor of the consecration of the country to the Sacred Heart of Jesus in 1873. One of its significant features is that the traditional gargoyles were replaced by animals typical of Ecuadorian fauna. 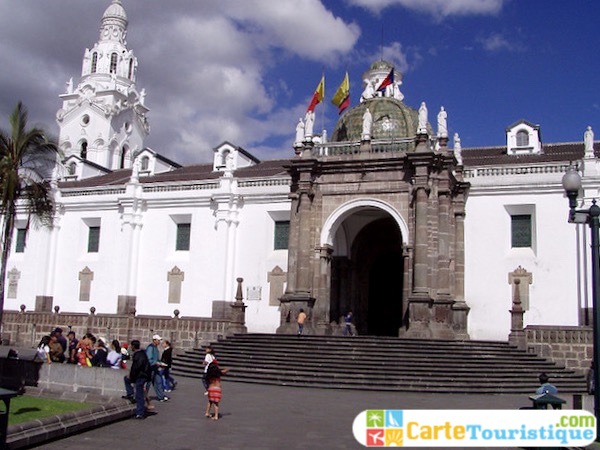 The Metropolitan Cathedral is the religious building of greatest spiritual value for the Ecuadorian Catholic people. Its construction began in 1562 and took almost three hundred years, since it was completed in 1806. In this enclosure rest the remains of the Venezuelan hero Antonio José de Sucre, known as the Grand Marshal of Ayacucho and who gestured Ecuadorian independence, there are also the mortal remains of former presidents, bishops and priests who had great significance for the country. It was also the scene of the homicide of Ignacio Checa y Barba, the bishop of Quito in 1877, who was murdered with poison in consecrated wine. 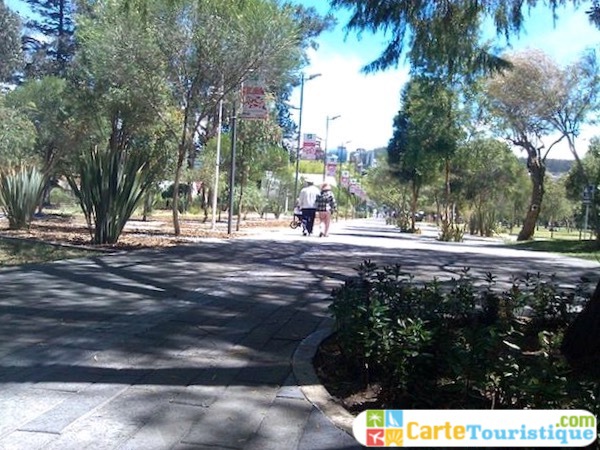 La Carolina Park is 67 hectares of land located in the center of Quito, in the sector Iñaquito, became one of the most important urban parks in the city and South America inclusive. In this space there is a diversity of sports fields, which cover disciplines such as soccer, basketball, bicycles, tennis, among other sports, so daily receives large numbers of visitors, including locals and foreigners and the figure rises to fifty thousand people on weekends. There are also a number of restaurants, exhibition halls and sites for the development of artistic and cultural events. 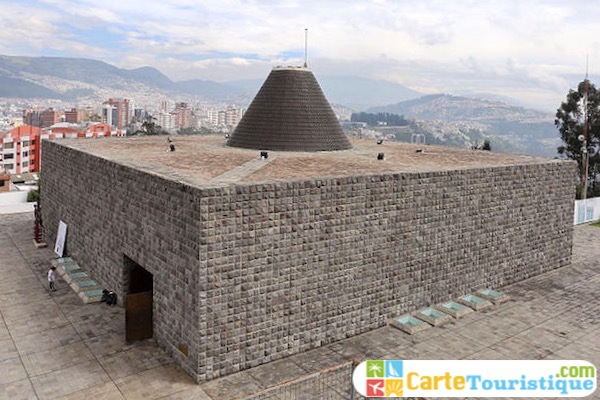 The Capilla del Hombre Museum is in the sector known as Bellavista. It is a museum that offers samples on pre-Columbian archaeological pieces, colonial objects and a wide sample of the Ecuadorian plastic artist Oswaldo Guayasamín, whose work shines completely in this place, inaugurated in 2002. Guayasamin’s works shown in the museum are classified by different themes in which human emotions such as pain, anger, discomfort, among others, are evident.

Map of Hotels in Quito

In Quito there is a variety of hotels and lodgings to please tastes and adjust to the most varied budgets. This is how in the Ecuadorian capital you can find everything from luxury hotels, boarding houses with a rustic structure, to ideal lodgings for backpackers, since most of the visitors are young North Americans and Europeans. The best area to stay is in the center of the city, for the most expeditious access to areas of tourist interest, but there most of the accommodations are in structures of rustic houses type pensions in which a room is rented. The most luxurious and modern hotels are in the north and south of the city. One of the most recommended places is a Quiteño neighborhood in the center north, known as La Zona, in which there is a great hotel offer. Prices range from 160 USD as maximum price per day to 37 USD as the cheapest.