976 kilometers from the coast of Ecuador is the Galapagos Archipelago, a natural paradise whose history is as fascinating as its untamed nature, its extensive endemic fauna and vegetation. In this tourist map we will travel to Galapagos, whose official name is Archipelago of Colón, which is constituted in a province that includes thirteen islands of great size with surfaces that surpass the ten square kilometers, six islands that measure between one and ten square kilometers, besides 215 islets and that acquired fame by its splendid beauty and by being the place in which Charles Darwin verified his theory of the evolution by natural selection. But it is not only geography, in each of these islands, declared World Heritage by UNESCO, an ecological tourism is developed in which species can coexist without fear of humans.

Galapagos is more than a tourist city and cannot be described as such. It is an ecosystem formed five million years ago in the Pacific Ocean and has the greatest volcanic activity on the planet today, which has repercussions on its formation process that is done constantly especially in the younger islands, known as Fernandina and Isabela and named after the kings of Spain who financed the expedition trips of Christopher Columbus. The Galapagos Archipelago, also known as the last home of Solitaire George, the last giant sea turtle of the Galapagos species, which became extinct in 2012, has an important collection of endemic fauna such as land and sea iguanas, sea lions, penguins, grey herons, mockingbirds, cormorants, among others. For this reason and because of its flora and beautiful territory, it is an ecological tourism destination designed to help preserve the species that inhabit it, and this is its greatest source of income since it can receive up to two hundred thousand visitors annually. 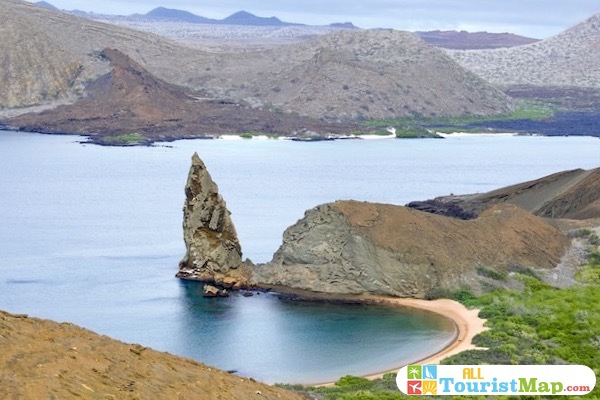 Galapagos has tourist attraction for those who are lovers of emotion and adventure, nature and biodiversity. To visit it is to come into contact with fascinating and indomitable landscapes in which there are not only beautiful beaches with crystalline waters and white sands but also a terrestrial and marine fauna that does not fear humans. To get to this archipelago many prefer the method of embarking on cruises, but island tours can be done (in some areas allowed) on their own. The archipelago has a Caribbean climate, with more constant rainfall between January and April. To reach Galapagos by air there are airlines that make this journey from Guayaquil or Quito, the main cities of Ecuador. The most frequent flights arrive to Baltra Island and from there there there are connections with the islands of San Cristóbal and Santa Cruz. From the airport there are buses that take you to the docks where you take boats that transit through the Itabaca channel to get to Santa Cruz. There are options of taxis and buses to take them to settlements or towns where there are lodgings, restaurants and other infrastructure. To move between the islands there are small boats available in the main ports: Ayora in Santa Cruz, Velasco Ibarra in Floreana, Baquerizo Moreno in San Cristóbal and Villasmil in Isabela and Fernandina. The rest of the Archipelago, which accounts for about ninety percent of the province’s territory, is a protected and uninhabited area.

Galapagos was discovered by chance in 1535 by Fray Tomás de Berlanga, who was originally headed to Peru. The history of the Archipelago is marked by the exploitation of its flora and fauna, especially whales, and by expeditions of scientists from Europe. Also because it was the favorite place for English pirates who since the end of the sixteenth century used it to hide gold and silver stolen from galleons in America. One of the greatest attractions of visiting this paradise that seems more like a scenario of prehistory is the closeness with which you can observe the species, since its wildlife is not afraid of humans because the absence of predators gave them an unusual confidence in the animal kingdom, although it is forbidden to disturb the species that live there and this is even penalized or sanctioned legally.  But, one of the possible scenarios is to enjoy a day of beach and sun with a sea lion in the vicinity or walk next to an iguana.

What to visit in Galapagos

Isabela Island is the largest island in Galapagos, with 4,588 square kilometers of territory and occupies more than half of the province’s land territory. It owes its name to Queen Elizabeth I, who sponsored Christopher Columbus’ trip to the New World. Its formation obeys to the fusion of five volcanoes and its pinnacle is the Wolf volcano. It is the third largest human settlement in the archipelago as it is home to about 2,200 people along with penguins, sea lions, iguanas, pelicans, cormorants and other endemic species such as giant hawks, pigeons and finches.

To the west of the archipelago is one of the youngest islands in its geological formation process, Fernandina Island. Its name was given in honor of King Ferdinand, who sponsored Columbus’ voyage to the lands of America and consists of a territory of 642 square kilometers and 1494 meters high. Because its formation process is constant, since it is one of the new islands, lava flows can be observed in this locality recently, in 2009 the volcano entered an eruptive stage and its organic waste of ash and water vapor reached the sea. Marine iguanas abound on this island, moving in large groups, fur seals and penguins. You can also see beautiful mangroves.

Santa Cruz Island has an altitude of 864 meters and an area of 986 square kilometers in which inhabits the largest human settlement of the archipelago. Its name was given in honor of the English ship Cruz de Cristo and in this territory operates the main office of the Galapagos National Park Service. On this island you can observe the most beautiful and exuberant vegetation of the archipelago, you can see mangroves that serve as mating grounds for sea turtles and small sharks. Visitors, in addition to enjoying the flora and fauna, can practice some water sports, including surfing and diving.

The 585 square meters that correspond to this island, called Santiago Island in honor of the Spanish patron saint, are the territory of a number of domestic animals that did not emerge from there but arrived along with the human population, but did not favor the flora and fauna endemic to the place, which includes mainly species such as Darwin’s finches and Galapagos hawks. There is also volcanic activity on this island, especially in the territory known as Sullivan Bay.

Floreana Island is also known as Santa Maria, they are 173 square kilometers in which one of the most beautiful places are observed with the nesting of pink flamingos and sea turtles. Endemic animals such as the Floreana mockingbird and the Galapagos penguin also play a major role in this territory. But not only its fauna is a spectacle but also its marine flora because it is the place where you can observe a submerged volcanic cone that became coral formations and is known as Devil’s Crown. In addition to the expeditions to observe its flora and fauna, in Floreana you can practice diving and other water sports.

San Cristóbal Island is the capital of the province of the Galapagos Archipelago, has a height of 780 meters and a territory covering 558 square kilometers. To the south of the island is the largest freshwater reservoir of the entire archipelago and you can observe a large number of birds. On this island you can observe sea turtle shelters, a colony of sea lions and another nesting colony for frigates near Puerto Baquerizo Moreno. From this place excursions are organized to go to diving sites.

Baltra Island is one of the most visited, in its twenty-seven square kilometers is the airport of the Galapagos Archipelago, which was built specifically for the U.S. Navy during World War II, with the intention of patrolling the Panama Canal. Those who caused damage and extinguished part of the fauna that was later replanted in the place. The island is dominated by cacti and is the ideal place for scuba diving, snorkeling and surfing, but permits are required from the Ecuadorian Navy. This is mainly the point of enclave with the other islands as it constantly receives flights from visitors arriving to the archipelago. 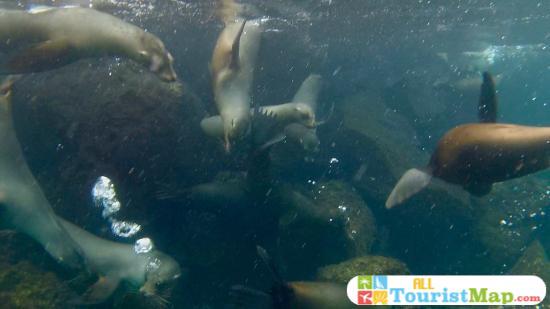 In the twenty-four square kilometers that correspond to the Island of Santa Fe are the largest forests of the archipelago, which are the forests of cactus opuntia. One of its most outstanding landscapes is the turquoise lagoons where there are sea lions that live with visitors who practice water sports such as snorkeling. This is the territory of the endemic land iguana species of Santa Fe, so there are many specimens that live there, along with other exotic animals of great beauty such as the swallow-tailed gull, which has its home in the coastal cliffs of the island.

Genovese Island, named after the Genoa in which Christopher Columbus was born, is small. It has a territory of fourteen square kilometers and is known as the Island of the Birds, for the large and varied number of bird colonies that coexist there, among which several species of gulls such as the forked tail petrels or lava. In its geography is surrounded by cliffs, Darwin Bay, which was formed as a result of the collapse of the wall of a volcanic caldera. But this is not only the most beautiful landscape, there is also Lake Arcturus, a crater lake whose salt water has been there for six thousand years.

Marchena Island, named after a friar named Antonio de Marchena, is an island territory of 130 square kilometers that became the ideal place to dive in its waters. Within it, although there are no places to visit, you can find a beautiful flora and fauna in which giant turtles, sea lions and flamingos predominate. On this island there is a volcanic caldera which is the largest of the geological structures of its kind, measuring seven kilometers long and six kilometers wide.

In the Galapagos Archipelago there are a variety of options for the accommodation of visitors. There are a variety of hotels and settlements to choose from according to the tastes and budgets of visitors. The main recommendation for the search of lodging is centered in the islands Isabela and Fernandina, which are those that count on greater population and have services like restaurants and transport, among others. There are options such as ecological campsites where there are well-equipped tents in the Galapagos National Park. There are also some 281 hotels that offer visitor services and some have additional offers such as organizing excursions. As for the cost of lodging per day, average prices range between 90 and 95 USD on the hotel search pages, but the price of the most luxurious can exceed 110 USD per day. The main recommendations are Coloma Galápagos Hostal and Hotel La Casa de Judy.

Video of the most impressive tourist places in Galapagos