Many Asian cities, known for their convulsive pace are in the sights of many adventurers. Hanoi does not escape this reality, but unlike the old Saigon, Ho Chi Minh captures the Vietnamese essence. With this tourist map of Hanoi you will have the opportunity to avoid the best places to get lost in the city, without it devouring you. There is a bit of French Indochina, from its communist past, but above all from imperial Vietnam, with a millenary old town that gives you the opportunity to get a good slice of its existing treasures in its alleys. In addition to shops, bars and handicrafts, it would be great if you could take a motorcycle ride in the city and move at its pace, and we have a few interesting places to show you. Here’s what you need to get to the city and magnetize yourself with the urban, historical and cultural magic of Vietnam.

To the north of Vietnam the resistance led by Hi Chi Minh forced the city to be the bastion of the communist axis that would place as an operational base the force that confronted a Cold War superpower such as the United States. This is how Hanoi almost turned Vietnam into a sort of divided country. The outcome was disastrous in terms of human lives but at the same time gratifying for those who fought on their own ground, later reunifying the nation and establishing this city as the capital of Vietnam. Going back a bit, the city shows its European influence product of the French Indochina colony, but at the same time it makes clear that the traditional is imposed, and you will see this in the architecture of the city and its surroundings, apart from its old residential complexes of old empires. 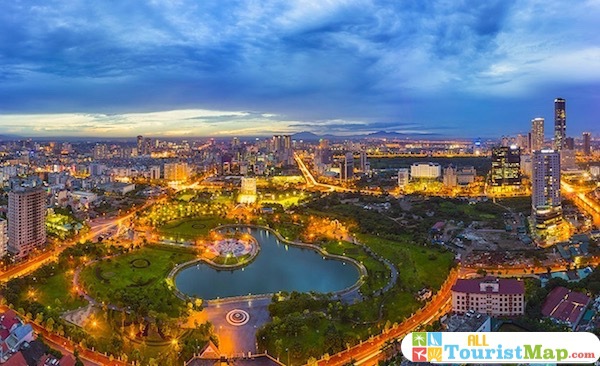 Along the Red River unfolds all the vibrant of the city that has its reward in different tourist sites, which are a parenthesis to so much congestion. Proof of this we see Lake Hoang Kiem as a gateway to tranquility in the city. It is clear that this type of place as well as the Pagoda of the One Pillar and the Temple of Literature transmit that same energy, and in particular with their artistic charms. When it comes to history we can find the traditional from the point of the ancient dynasties of the Imperial City of Thang Long. If you want to go shopping Dong Xuan Market gives you the right atmosphere, and exhausting at the same time, in the good sense of the word. Try going to the Thang Long Puppet Theatre to nourish yourself with Vietnamese performing arts in a different way.

Moving around Hanoi means having a clear understanding of the basics to cover the city, whether it’s walking or motorcycling. Take into account the availability of their tourist sites, as well as some advice to make the most of them. Learn how to move with our Hanoi tourist guide, which needs detailed information about its impeccable sites in any itinerary. In addition, our routes are designed to take you and cover everything worth seeing. As you will notice, the capital has many super interesting places, so you’d better have a few days to visit. And if it’s about kicking the street then you could use our advice on accommodation in Hanoi.

What to see in Hanoi 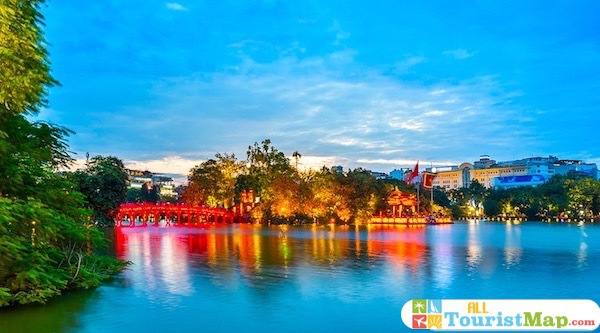 More than a lake, a capsule of tranquility before the noise of the city. This lake full of legends has a beautiful temple that you can visit, as well as proximity to the historic center of the city. You can picnic, exercise or interact with the inhabitants, watch them pass by, or try to beat them in a game of chess. The greenery of the trees adds simplicity and naturalness to an environment that struggles to survive despite environmental pollution. Some soft-shelled turtles can still be seen in the lake. Let some locals soak you in the myths and history behind this wonderful lake. Even on the shores of the lake there are several places to have lunch, and have a delicious coffee. The location of this lake makes it an excellent meeting point after going to the nearby markets or the French Quarter 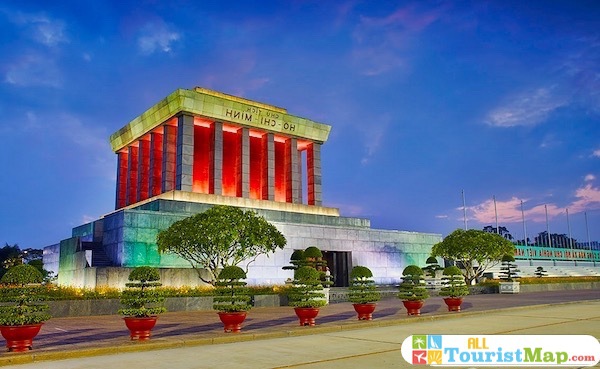 As usual in communist regimes the practice of embalming has become almost obligatory by the time their top leaders move to another plane. Such is the case with Ho Chi Minh, the Vietnamese leader, whose body has been lying in this mausoleum since the year of his death in 1969. Located in the square of the famous independence meeting presided over by the leader, you will see that a large audience lines up to take a look at the embalmed body. All aware of the security measures that must be complied with in order to give a visit under a climate of respect and moderation. If this character catches your eye, you could complement your search with the museum and the residence where he lived. There are two times in the year when the body is treated in Russia, so make sure it does not coincide with your visit. 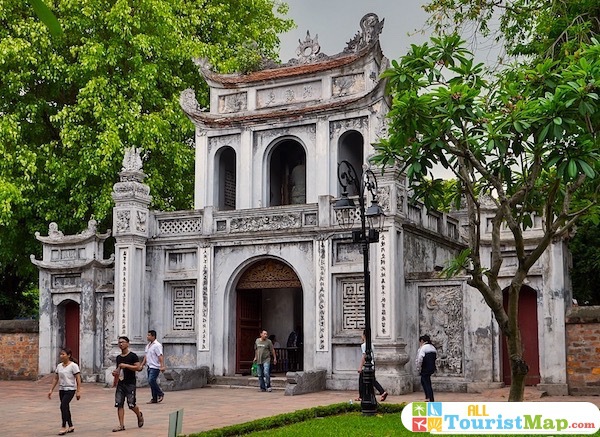 This temple of great importance to Vietnamese culture is a tribute to Confucius. Its antiquity adds an incalculable value, having as origin the year 1.070. The Vietnamese high society was formed in this temple that is considered the first institution of high studies. This enclosure of considerable dimensions provides a pure environment in tune with the natural environment; perhaps today’s universities have much to gain from this temple. Its prestige was due to the very difficult academic evaluations. In fact, those who achieved merit immortalized their names in stone. At the same time, the landscaped atmosphere provides an atmosphere of tranquility to today’s students. As it is linked to confusionism, the ornaments and paintings of the place acquire a color different from the typical Buddhist atmosphere.

Pagoda of the Unique Pillar 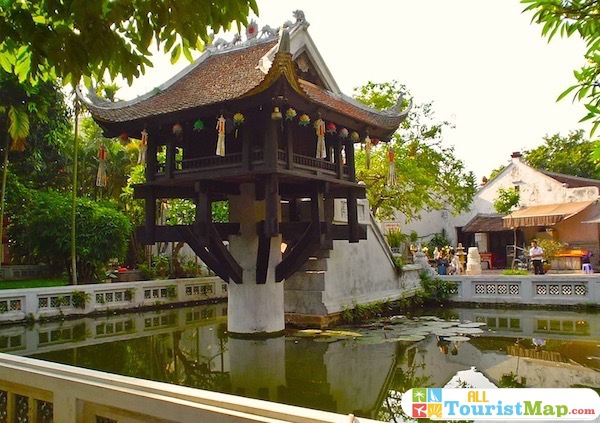 It is located between the monuments to Ho Chi Minh. The symbol of the lotus flower is embodied in the form of this temple which stands on a huge stone in the form of a pillar. There is the origin of the name of the temple that by its style and particular that turns it into a religious piece without equal in Vietnam. In its interior the image of Buddha acts as regent deity. Those who practice this religion come to give offerings in exchange for blessings. Very revered by couples who wish to conceive children in Vietnam. Around it is the lake which surrounds the small temple. The gardens give it a suitable background for beautiful photographs. Entrance is free so you have no excuse to come and fall in love with its history and positive energy.

Hanoi is an ancient city. Throughout its existence was residence and political seat for the various dynasties that reigned in the past. For this purpose, the Imperial City of Thang Long was made of palaces and green areas. It is believed that it dates from the year 1.010, as some clues found affirm. The fact is that this site was one of the most famous in Vietnam. Even in the war the high ranks discussed strategies, in addition to storing ammunition and other campaign equipment. Today it is still important, this time as a tourist attraction. Those young graduates have made a tradition of photography in this place. Its ornamental beauty, provided with gardens, statues and bonsais gives it an atmosphere that provokes to know it in all its corners. 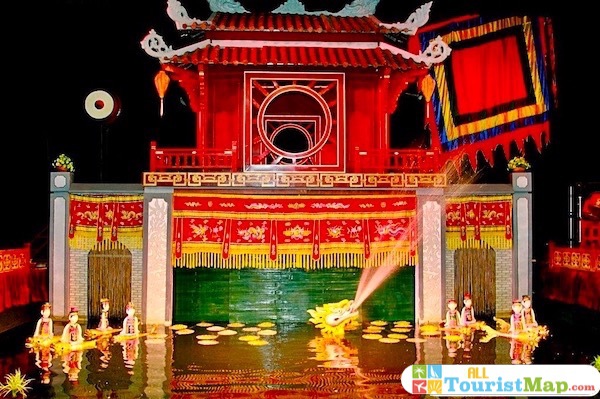 A fun way to get to know some local fables is to admire this spectacle of colorful puppets. The scenography, gestures and interpretations give a clear sense to the message, while impressing with a synchronized music. If you travel with the kids the best cultural window of Vietnam for them is in this show that the old neighborhood offers every day of the week in various functions. It is important to emphasize that you will have to be attentive to obtain tickets with time, since the theater enjoys so much fame that its functions are always full of curious people and lovers of this scenic art.  This theatre is one of the few of its kind that persists with elements used at the beginning of the 11th century. At the same time it has made tours around the world gaining even more followers. 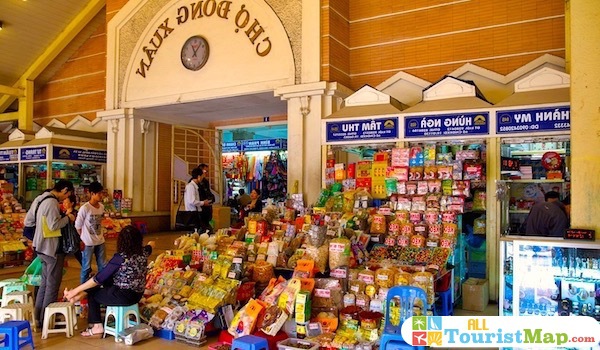 This market is well known for its large number of shops and narrow corridors that you will have to walk through with great attention. There is a great variety of articles and practically, you will find from clothes and footwear, to exotic ingredients to cook. Of course, traditional garments, as well as Vietnamese textiles and utensils can be purchased in this market. In fact, it is one of the market’s specialities to direct souvenirs and products to curio hunters. Bulla, smells and tastes are part of the commercial environment in this congested and thriving market. One of the places that has been occupying most of the tourist itineraries lately. The best time, however strange it may seem, is at night. The establishments aimed at foreigners offer souvenirs, drinks and good local food to give travelers a different taste of the city. 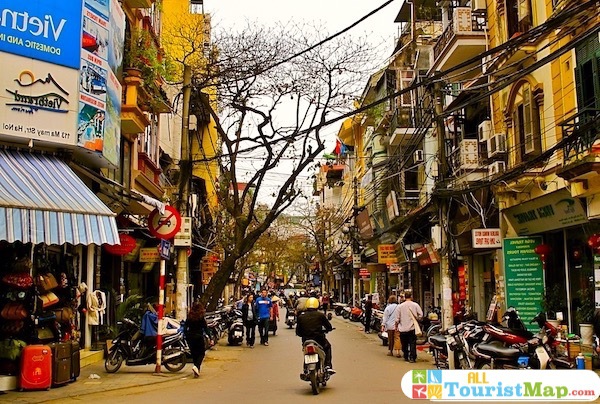 There’s no better way to get to know the city than to visit its old quarter. In reality it is not about being a spectator of stands, it is about diving into its bed of people circulating constantly and massively. The urban noises of a city give the impression of the existence of a communion with chaos; in reality everything flows in its particular order.  All its shops, restaurants, bars and lodgings are scattered in its diverse infrastructure that leaves a lot of data about its historical evolution. Since it is the main nucleus of the city, it is not for the least that it is crowded with people. So much so that the typical houses consist of overcrowded apartments located above the shops that occupy the ground floor of the buildings. 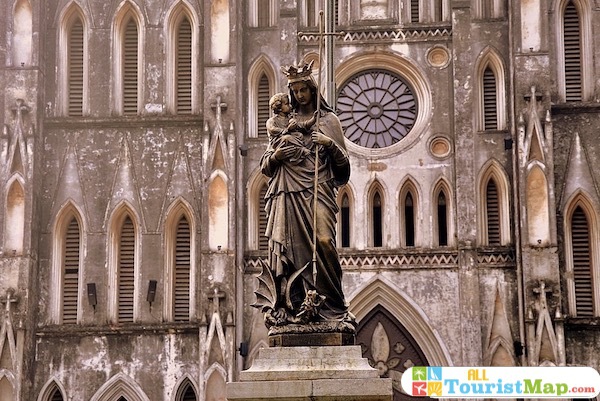 France is embodied in the little neo-Gothic architecture of Vietnam. And this Cathedral shows that the colonial era inspired to build this type of constructions. Under the concept of the cathedral of Notre Dame in Paris, this magnificent work was made possible. Built in the nineteenth century, unfortunately bursting a legendary and almost millenary pagoda, has generated a rare contrast in this merely Buddhist city. If you are in the Old Town you can reach it on foot; the perfect excuse to escape from it all. The church is surrounded by places to eat, drink and rest. It would be ideal to recharge your batteries before entering the cathedral that welcomes you with its worn facade, but with the original Gothic elements. Inside, its stained-glass windows and Vietnamese motifs play ornamental. During the masses they were once suspended during the communist era.

Map of hotels in Hanoi

As a general rule, the Old Quarter, due to its location, is usually the most recommended place to look for accommodation. The advantage of this place is that you will have everything just around the corner. Its shops and streets tempt you to an escape with return, of course, with a Hanoi street map at hand. The disadvantage, the tireless noise; but that’s what it’s all about, living in Asia, and what better way to start than in Vietnam’s capital. That’s why we connect you with a lot of recommendations on our hotel map in Hanoi. An example of all this is the Hanoi Pearl Hotel, some of its rooms overlooking Lake Hoan Kiem. There is a free breakfast, a bar and an elegant rooftop for group and intimate meetings. Its rooms are composed of traditional and modern style with a sophisticated concept.

Video of the most impressive places in Hanoi